The creator of the Instagram sensation But Like Maybe takes us on an illustrated journey through her worst dating mistakes—a hilarious, hopeful guide to what you need to get wrong in love before you get it right.

Arianna Margulis’s pen was set aflame when a boyfriend took her for a walk in Central Park. She was sneak-attack dumped because she “interfered with his meditation schedule.” After a few sobs, she found her way to a Sharpie, doodled the hilarity and the heartbreak, and But Like Maybe was born. As her cartoons became an Instagram cult hit, Arianna chronicled her misadventures through modern love via a crop-topped doppelganger, equal parts optimistic and anxious, who holds tight to the belief that bae is out there.

Now, with 70 never-before-seen toons, her first book is a witty and winning primer on what not to do when dating. Inspired by all the ways Arianna’s gone wrong in her search for love, from planning matching outfits with her high school boyfriend without his knowledge to deplaning an aircraft because her crush texted, this charming and off-kilter anti-guide gently leads you to what matters: realizing that you’re already pretty awesome.

With plenty of advice for recognizing and moving on when he’s just not that into you, Arianna shows how to not let a read receipt ruin your night, what to do when the slow fade commences, and how to flip the busy script on a guy. Dating can make the best of us a bit crazy. Keep this guide by your side so that the next time tequila urges you to text your ex, you can instead tell yourself . . . but like maybe don’t.

Have you ever looked up at the sky after having your heart smooshed and thought, What is wrong with me?!

More times than you can count? Because LOL, same.

Let me first begin by saying that NOTHING is wrong with you. You’re a gosh darn unicorn. Glitter runs through your veins. But you could be doing some stuff that’s wrong. Like I did.

My name is Arianna Margulis and I’m a *reformed* serial dater. All of my many, many “relationships” from high school through about age thirty topped out at three months. My sweet spot was around three weeks. My friends like to joke that I’ve been on a date with every guy in Manhattan, and I gently remind them—don’t forget most of Brooklyn, too. How had I NEVER had a serious boyfriend? I always fell so hard, and too fast. I had no problem finding guys I liked, I just had problems keeping them around. I never understood it.

But, somehow, I remained ever hopeful. I always thought, The next guy I meet could be my husband!

Growing up in a small town in Michigan, that’s how I thought it was supposed to work. Meet someone in college, get married, have babies. Why was it taking me so gosh dang long?

Now, for the first time, I can say I know what love feels like. (Reciprocated love.) It prompted me to think, What was different this time? And I realized the difference was me. Looking back, I truly believe that I reeked of insecurity and desperation. I brainwashed myself into believing that I needed to catch up with some timeline and constantly compared my romantic relationships to others around me.

I was obsessed with the idea of love. So obsessed with the thought that my happiness lay with finding a man. I used to think, If I just get a boyfriend, I’ll finally be happy. Life would fall into place. I was fixated on finding someone and ignored everything else, especially myself. I admittedly had no serious personal goals, dreams, or aspirations besides “him.” I couldn’t discover or love me because I was too busy trying to find someone else to love.

Let me take you back to one of my breakthrough moments

It was a gorgeous day at the tail end of May in New York City. The Tuesday after Memorial Day, to be exact. Why do I remember this? Well, I had just returned after a magical weekend with my then–“boyfriend.” Let’s call him . . . Cooper, which is obviously not his real name.

disclaimer: All the names and some descriptive details in this book have been modified to protect these men from an onslaught of vodka sodas thrown by angry women.

Cooper’s family lived in Maine, some adorable town with a strip of stores that look like cottages, a town where everyone knew one another by name. We had only been seeing each other a couple of months, but it had escalated quickly. I had never really met anyone’s parents before. I was on a cloud when I came back to the city because the report was in: his mom, dad, cousins, everyone loved me!

Cooper had texted me that afternoon to meet him outside of his office on Fifth Avenue. We would go for a walk in Central Park. Swoon, how perfect.

We held hands as we strolled but didn’t get very far when he asked to sit down on a park bench. He put his hand on my thigh. He looked at me. Was he going to tell me he loved me? Was this it? Was I finally going to hear the words with meaning for the very first time?

He began, “I just want to say, you’re an amazing girl, but—”

And there it was. My heart sank. Those words I had heard so many times before, and I knew what was to follow.

This wasn’t a declaration of love. It was a good old-fashioned dumping.

He went on to tell me that he wasn’t himself anymore, he needed to focus on work, and I had really thrown off his meditation schedule. That was the line that made me want to burst out laughing and crying at the very same time. I repeat, I threw off his meditation schedule. I ripped his hand off my thigh and told him that I never wanted to speak to him again. And I didn’t—until a year or so later, when I found myself drunkenly yelling at him at a night club circa 3 a.m. But more on that later. I walked to Fifth Avenue and dramatically screamed, “TAXI!!!,” leaving him in the dust. (I’d always wanted to do that anyway.)

I could still show you the exact park bench where it happened.

I celebrate this story because, for the first time, I didn’t wallow. I laughed, and I used the breakup (sorry, okay, dumping) as fuel. I threw myself into a creative venture. I started doodling all sorts of funny breakup toons. I started reflecting on all of the stories that came before. The pain of the past was beginning to turn into pleasure. It was an epiphany!

The irony is, by sharing my insecurities and horror stories, I was able to laugh at myself. I started to enjoy my journey and all the frogs I kissed. Or, all the frogs that went leaping away from me. I was creating something from pain, something I valued way more than a boyfriend. I was making something that I was proud of and sharing it with the world. I turned my broken heart into art. I learned to love me first (*cheese alert*), which I believe is the key to loving someone else.

Oh man, did it take A LOT to get me to this point.

As you continue to read, you’ll see that I have no business writing a dating guide. Nothing I did ever worked. I have no hot tips on how to reel him in. I have no secret potions or spells. (Wouldn’t that be nice?) What I can offer you, though, is where I went wrong. Where I went oh-so-very-embarrassingly, wow-really-tho? wrong. I have stories. Lots and lots of stories. No dos, just don’ts.

I kind of think that’s what I discovered. There’s no reeling anyone in. There’s no trickery. There’s just you, being yourself. Someone will see you doing your thang and say to himself or herself or their gender-non-binary self, “I want to be a part of their world.” Where we go wrong is when we don’t trust that that’s even possible, so we start trying to make it happen. You get a PhD in emojis and read receipts. You ascribe magical powers to certain tops and lip glosses. You pretend to be really into rock climbing despite your crippling fear of heights. This book is about helping you to COOL IT.

And a note about gender. Since I’m a woman who dates men, my stories are from that perspective, but dating is dating, and love is love. I think these are some pretty universal experiences. Whoever you are and whomever you love, this book is for you. Girls who date girls also do the seductive slow fade, boys who date boys also sometimes move across the country to surprise a summer fling (LOLZ, more on that later), and everything in between.

Arianna Margulis is currently navigating New York by way of small-town Michigan. As a relationship-obsessed fashion girl, she began doodling about her day-to-day dramas on the floor of her studio apartment and decided to expose her innermost feelings to the world. Thus But Like Maybe, the girl cult Instagram, was born. From painting street-sized murals and major brand collabs to enacting revenge on ex boyfriends, her imaginary best friend has created a world of opportunity she never thought possible. But most important of all, her drawings have brought her self-confidence, motivation, and love. Armed with a sharpie and fueled by margaritas, she’s ready to take on the world. 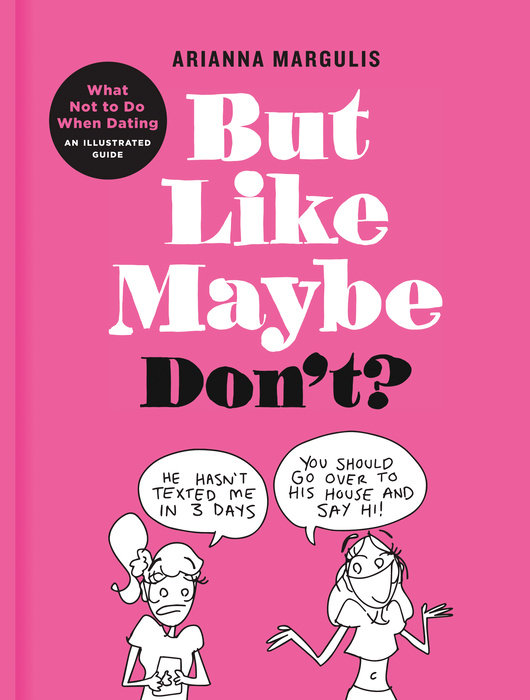