Rituals, Reiki, and Self-Care to Heal Burnout, Anxiety, and Stress

You have a choice. There is a path out of pain, anxiety, burnout, and the feeling of complete overwhelm. This book is your invitation to choose that path.

“Patel shares how to tap into subtle energy shifts through simple yet powerful practices that you can do on yourself.”—Goop

When Kelsey Patel was struck by searing back pain in her twenties while working on Capitol Hill, she had no idea that repressed emotions could manifest as debilitating anxiety and physical pain. What healed her was empowering herself to choose how she lived her life. In Burning Bright, her first book, Kelsey shares the self-care techniques that helped get her body, health, and emotions back into alignment: Reiki, emotional freedom technique, meditation, yoga, and more.

Now a spiritual coach, Reiki master, and wellness expert, Kelsey has helped thousands struggling with burnout and anxiety. This book is filled with stories, hard-won wisdom, profound empathy, and the secrets to reexamining thoughts and breaking negative patterns. You will learn how to:

• practice Reiki on yourself, without a master;
• interrupt anxiety cycles with tapping, breathwork, and journaling;
• perform simple rituals that can boring you peace in any situation;
• ground yourself and get back into your physical body;
• release emotional and physical blocks so that your energy can flow freely;
• establish a solid foundation of self-worth and self-care.

As you use these techniques to align with your priorities, you’ll watch your authentic life unfold—a life of harmony, fulfillment, purpose, and joy. Burnout makes you feel like there is always more, more, more to do, but the truth is, you are enough right now without any more doing. Learn how to feel this truth because it’s time for you to start burning bright.

An excerpt from Burning Bright

Awareness: The Age of Anxiety

We don’t see things as they are; we see them as we are.—Anonymous

The earthquake hit when I was sitting in my twenty-second-floor apartment in Los Angeles, all alone in my bedroom. My husband was away in another country and, suddenly, the whole building started rocking back and forth. I was literally swaying in the sky, twenty-two floors off the ground, in the middle of the city. I panicked. My palms started sweating, my heart started racing, and all the terrible thoughts started running through my head: Is this the Big One? Is it all over? Is California going to break off into the sea? Am I going to die? Are we all going to die?

This was a moment of stress, and I’ve had plenty of them in my life. Fortunately, I was prepared. On the inside, some deep intuitive part of me knew that my physical body was having a fear response, and there was only one thing I could do: Feel it. I heard a voice in my head saying, “You’re safe. It’s okay to feel this.” I didn’t want to feel this fear, but the only other option was to deny it, and to deny a feeling is to repress it, so it stays inside you and doesn’t leave.

So I chose to ride out the feeling, rather than hanging on to it. I gave myself permission to feel my fear. I let it wash over me and pass through me. I brought my full awareness to what was happening to me at that moment. I stayed present. I kept thinking, “I’m experiencing an earthquake.” That was the truth.

And then it was over. It turned out not to be the Big One. My building did not come crashing down. California did not break off and sink into the ocean. I was just fine.

As soon as the tremors stopped, I reached out for connection. I checked in with my best friends, who also live in Los Angeles. I told them I was scared. I let them love and support and coddle me a little, because that’s what friends are for. One of my girlfriends suggested that we go for a hike, so we met up and I reconnected with the earth, with nature, and with people who bring me a sense of calm. My fear faded. It had been like the wave of an ocean—rising up, peaking, then falling away.

But what if my building had collapsed? It’s taken me a long time to get to the place where I can finally say, That would have been fine, too. If that’s what was going to happen, there would be no point in fighting it. If it’s my time, it’s my time. I’m happy that it wasn’t my time, that I lived to see another day. But if it had been my time, I wouldn’t have been able to control that, so what good does it do to try? The lesson, which I have learned again and again in my life, is that the only thing you can control is your own response to fear. When your response is to experience it with full awareness, flowing with it instead of fighting it, that is the remedy.

But where does fear come from?

The Source of Fear

Here’s a riddle for you, my friend: What do 75 percent of adults say they have had in the past month? Here are some clues: Women have it more than men, it leads to sleepless nights and health problems like chronic pain and upset stomach, it kills sex drive, it makes people overeat, and it can cause anxiety, depression, irritability, anger, constant worrying, and panic attacks. Scary, right?

But there’s more. Eighty percent of people have it at work, and 40 percent have it to the extreme. It costs employers $300 billion every year, it lowers job performance, and younger generations are experiencing it more than they ever have before. It’s a serious health concern for teenagers in ninth to twelfth grade, and millennials seem to have it the worst. Financial problems often trigger it (even in millionaires), followed by work problems and family responsibilities, and the way most people deal with it is to self-medicate with caffeine, nicotine, prescription medications, alcohol, or long hours in front of a television or online. Even considering all that, it’s not always a bad thing, but too much for too long can seriously harm you, if you don’t know what to do about it.

Did you guess what it is? It’s stress, of course. If you experience chronic stress, my dear, it is standing in your way, generating fear, triggering anxiety, burning you out, pulling you down, damaging your health, clouding your mind, keeping you in a state of grief, and interfering with your connection to your deep inner self, the people in your life, and even your energetic connection to a higher power. Many people don’t realize how badly they have it. When I was the most stressed in my life, I probably would have told you I didn’t have any stress at all. But I have been stress’s unknowing victim and my suffering was extreme. Maybe yours feels extreme to you, too.

But we’re going to take on stress because we all deserve a better life than the one we get when we live with stress as our constant, relentless companion. Stress is like the worst roommate you ever had. It constantly harasses you, gnaws at you, keeps you from thinking straight. It brings up all kinds of ridiculous things to worry about. It criticizes you and steals your confidence and makes you feel as if you need it to be successful just to survive.

I have been working on stress with thousands of clients and students for over a decade. The absolute majority of them tell me, when we first begin working together, that they experience some sort of stress, and they are seeking relief from it. And this is what I want to work on with you. Let’s knock stress down to size, so you can stop being controlled by it and move on to the bigger and better work of burning bright in your life.

What Stress Really Is and What It Really Does

If you have stress, or any of its complications, like chronic pain, an autoimmune disease like Hashimoto’s, a chronic condition like fibromyalgia, a hormonal imbalance, an anxiety disorder or clinical depression, confusion about your life purpose, problems in your relationships, a feeling of burnout in your work or personal life, or a constant feeling of overwhelm, you may be stuck in a chronic stress cycle. If you believe that you have to keep pushing and trying and doing and striving and effort-ing, or else you’ll fail or lose your grip on everything you’ve worked for, or disappoint someone, then we have some work to do. Let’s get into stress, so we can dismantle it from the inside out.

According to the Oxford dictionary, stress is a state of mental or emotional strain or tension resulting from adverse or demanding circumstances. In other words, stress is a physical response to a momentary experience. Sounds simple enough, right? Something bad or scary or new happens, and it makes you tense because, somehow or other, you’re going to have to respond to that situation.

When something threatens you, your sympathetic nervous system is the first responder, turning on the “fight, flight, or freeze” response. When this happens, your neurons send the signal to your adrenal glands to release hormones like adrenaline and cortisol that activate your body so you can respond more quickly and instinctually to danger: Your pupils dilate, you sweat, and your heart rate and blood pressure go up so you have more oxygen and nutrients available for your brain and muscles. Your liver releases glucose for quick energy, your lungs dilate so you can get more oxygen into your blood, and your blood is diverted from your organs and into your muscles so you can move faster and more powerfully.

You also basically stop digesting, fighting off germs, being able to pee, being fertile, and even thinking logically. This is why you can suddenly react more quickly, jumping out of the way of that speeding bus almost before you know you saw it, or lifting the car off the child before thinking logically that you could never do that, or running away from the charging rhino without calculating the relative speed of a human versus a rhino . . . or whatever other drastic thing you have to do to save yourself or somebody else. Without the stress response, humans probably never would have survived the Stone Age, so thank goodness we have it!

Kelsey J. Patel is a leading wellness expert and holistic healer. She is not only a sought-after spiritual empowerment coach, yoga teacher, Reiki healer, and meditation teacher, but also a multifaceted entrepreneur and inspirational speaker who's worked with major corporations to help address employee burnout. She lives in Los Angeles with her husband and stepsons.

Rituals, Reiki, and Self-Care to Heal Burnout, Anxiety, and Stress 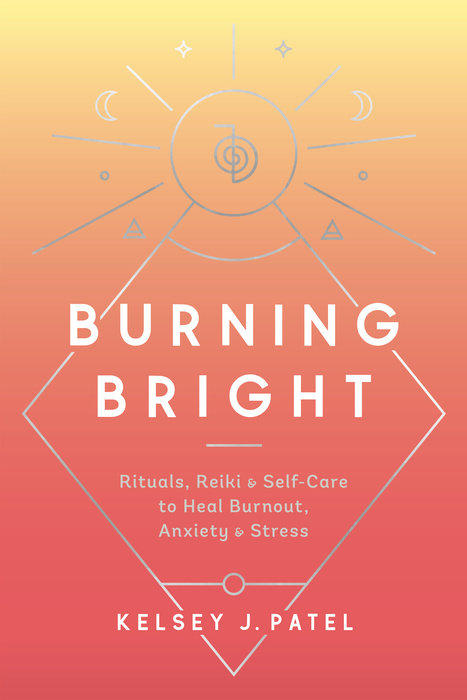