“A stellar debut . . . about an unconventional family, fear, hatred, violence, chasing love, losing it and finding it again just when we need it most.”—The New York Times Book Review

SEMI-FINALIST FOR THE OCM BOCAS PRIZE • One of the Best Books of the Summer: Time • The Guardian • Goop • Women’s Day • LitHub

After Betty Ramdin’s husband dies, she invites a colleague, Mr. Chetan, to move in with her and her son, Solo. Over time, the three become a family, loving each other deeply and depending upon one another. Then, one fateful night, Solo overhears Betty confiding in Mr. Chetan and learns a secret that plunges him into torment.

Solo flees Trinidad for New York to carve out a lonely existence as an undocumented immigrant, and Mr. Chetan remains the singular thread holding mother and son together. But soon, Mr. Chetan’s own burdensome secret is revealed, with heartbreaking consequences. Love After Love interrogates love and family in all its myriad meanings and forms, asking how we might exchange an illusory love for one that is truly fulfilling.

In vibrant, addictive Trinidadian prose, Love After Love questions who and how we love, the obligations of family, and the consequences of choices made in desperation.

Praise for Love After Love

“Love After Love is gift after gift. An unforgettable symphony of love and loss, heartache and guilt, and the secrets and lies that pull us together, and tear us apart. Dazzlingly told in the most electrifying prose you will read all year.”—Marlon James, Booker Prize–winning author of Black Leopard, Red Wolf

“This book teems with real, Trinidadian life: neighbors so nosy they know your business before it happens; descriptions of food that'll have you googling recipes; feting and liming and plenty of sex. There's darkness here, too—violence, loneliness, moments of despair—and how Ingrid Persaud weaves all these elements together in one book, with so much warmth and humor and love for her characters, is a wonder.”—Claire Adam, award-winning author of Golden Child

An excerpt from Love After Love

He didn’t need to shout. I was already behind the car opening the trunk to find the lunch cooler. I took it out carefully along with his newspaper and jacket. Sunil stood waiting as I walked past the driver’s door. His swift sharp kick in my shin was half expected.

—Slow coach. You can’t come when I call you? What, you ugly and you deaf?

Upstairs, I rushed to heat up his food. He was already stinking of rum but the first thing he did was get a fat glass and open a bottle of White Oak. Solo was in front the TV.

—Run and bring my slippers, boy. A man work hard whole week and I come home and have to ask people for my f***ing slippers? I have a good mind to beat your ass today.

Before Solo could get up I ran for the slippers.

—I ask you for any slippers? Make the boy get up for a change. All he does do is sit down in front the TV.

Solo continued staring at the TV but I knew my baby was frightened.

—Solo. What you waiting for? Come here.

Solo walked over slowly and carefully as if stepping on mossy rocks.

—Take off my shoes. And make sure they shine up good and proper before you put them away.

The boy undid the laces, his short, stubby fingers trembling. But he made a mistake. As he pulled off the socks he couldn’t help it. He’s only little. He twisted up his nose and the father saw.

—You find my foot smelling bad?

Sunil shoved his toes right up in the boy’s nostrils then pulled back but only to gain speed to kick his nose. If you see blood. Solo burst into tears and ran to the bathroom.

I froze right there. If he saw my tears that would only make him more crazy.

—Solo, bring your ass here. Come. I didn’t mean for your nose to bleed. Come, boy.

He waited. I was counting the seconds hoping he would cool off. His voice softened.

Solo appeared wiping away snot and tears. Toilet paper was pushed up both nostrils.

—Sit down. What you learn in school today?

—I’m right here and I can’t hear you. Open your mouth when you’re talking. When a person talking soft soft so, I know is something they’re hiding.

He grabbed Solo’s T-shirt and before you could say Jack Robinson the child was on the floor.

—Yes, please. What you learn in school today?

The slap hit the top of the child’s bent head.

His foot rammed into the boy’s stomach.

—All I want is to find out what he learn in school today. That so unreasonable?

I ran to Solo’s bedroom for his backpack, returned breathless and shook it empty on the kitchen counter.

—Solo, show Daddy what you do in kindergarten today.

The child was crouched down behind the kitchen counter, crying. I found his letters book and pushed it in front Sunil.

—Look how the boy gone and write all his letters so neat neat between the lines. And the teacher told me Solo’s best in the class.

Sunil flung the book like a frisbee towards Solo then rocked back and drained his glass. I didn’t move a muscle.

In two-twos I dished out the stew chicken, vegetable rice, and green salad. Sunil used the fork like it was a shovel. When he’s like this anything can become an argument and any argument can become a fight.

—But I hardly put salt in the food.

He rocked back in his chair. If looks could kill.

—You telling me you cook this chicken and didn’t put one set of salt in the pot?

—So, what I tasting? Something must be wrong with my mouth. How I tasting salt so? You know my pressure high and you giving me salt? Like you want to kill me? Eh?

I was careless. I’d left the rolling pin on the drain board. Easy reach of Sunil’s chair. That rolling pin might have hit the wall, or the bed, or the chair. But it found me. Doctor said the ulna and the radius snapped in two. My arm was in a cast when we buried Sunil a week later.

At the funeral, I told people it was no big deal. I must stop being so careless with ladders. But I talk half and left half. People used to look at me and Sunil and say, Betty girl, you real lucky. In my head, I wanted to ask if they making joke. Lucky? That man only gave love you could feel. He cuff you down? Honeymoon. He give you a black eye? True love in your tail. He break your hand? A love letter. He put you in hospital for a week? Love will stay the course. He take a knife and stab your leg? Until death do us part.

Water lock off since last night. Not a word on the TV or radio about when it’s coming back. A lady in the school office was saying how in Gasparillo they haven’t had water for a week. What to do? Pay the water truck three hundred dollars to get a full water tank—assuming the water truck even passing your house. I’m not wasting the three buckets I managed to fill up. Half a bucket is all I need to rinse my skin. If you’re careful that’s more than enough. Trust me. Teeth can brush with a cup of water from the fridge. The toilet is a whole bucket. Nothing you can do about that. Luckily I only wanted to pee. Unless number two is an emergency it will wait until I reach to work.

By the time I came out the road to catch a maxi taxi the Monday morning rush was in full swing. I is a man who hate reaching to work late. Not a single maxi taxi. When one finally pulled up it was a set of shoving and pushing to get on. I was thinking in my mind if to walk up to the junction in case more taxis passing there when I saw Mrs. Ramdin’s car slowing down.

Nothing’s wrong with Mrs. Ramdin. She’s a little talkative. And you can see the girl she was in her big dark eyes and simple shoulder-length hair. I just prefer not to be too friend friend with people in the main office. Next thing the whole of town all up in your business. I know she so so. Good morning, how you going, but never any big conversation. If I need to book a room for a special class, it goes through her. Things like that. Her husband passed away a good few years now and the whole school got half day off for the funeral. Take the drop? Don’t take drop? The driver behind was blowing horn and shouting,

What to do? I jumped in the back seat.

—Morning, Mrs. Ramdin. Thanks for stopping.

She elbowed the boy sitting in front.

—Say good morning, Solo. Anybody would think I never teach you manners.

The boy mumbled something. I don’t mind. He looked about ten—the age when they start to feel they big.

—My car’s by the mechanic and to tell you the truth this is late for me, Mrs. Ramdin. All now so I would be at school already.

—Yes, Miss Betty. If I’m taking transport I would normally come out a good half hour earlier.

—Ain’t I just say call me Betty? None of this Mrs. Ramdin like we don’t know one another.

—I can’t do that. I have too much respect.

We edged forward a little then stopped. Trinidad roads aren’t made for the amount of cars we have. Move. Stop. Move. Stop. She clearly didn’t like silence.

—I can’t take this traffic every day so.

I nodded although she couldn’t see me while driving.

—Mr. Chetan, sorry, I should have asked how you’re feeling. Ain’t you took sick leave the other day? You’re good now?

I took out my Express and held it high in front my face. If I take a couple days off, why is it anybody’s concern? Christ. You can’t sneeze without people telling you to take two Tylenol.

—The new headmaster treating you good?

Now look at my crosses. I don’t know this woman enough to speak my mind. Suppose she tells the boss I said so-and-so? Next thing I land up in trouble. I answered from behind the newspaper.

—He seems like a decent man. We haven’t had too many dealings yet.

Suddenly we picked up a little speed. Whatever was holding up the traffic had cleared away. Miss Betty was concentrating on the road but that didn’t stop her from prattling on.

—I’m not sure. You notice the label still sew on his jacket sleeve? Oh gosh, man. Pull off the label, nah. Money can’t buy breeding. Anyhow, I suppose we should give him a chance. God is love.

I pulled the newspaper so it almost brushed my nose. She took the hint. For the rest of the car ride she and the boy talked until we reached the gates of Saint Barnabas College.

Born in Trinidad, Ingrid Persaud won the Commonwealth Short Story Prize in 2017 and the BBC Short Story Award in 2018. She studied law at the London School of Economics and was a legal academic before earning degrees in fine art at Goldsmiths College and Central Saint Martins. Her writing has appeared in Granta, Prospect, and Pree magazines. Persaud lives in London and Barbados. 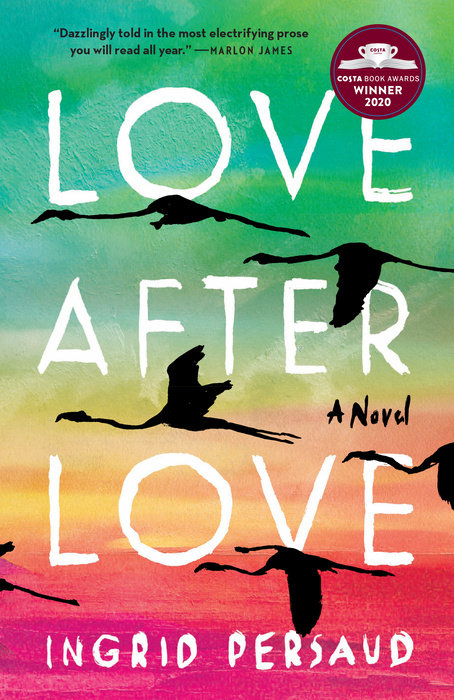