An ethereal meditation on longing, loss, and time, sweeping from the highways of Texas to the canals of Mars—by the acclaimed essayist and author of Shame and Wonder

David Searcy’s writing is enchanting and peculiar, obsessed with plumbing the mysteries and wonders of our everyday world, the beauty and cruelty of time, and nothing less than what he calls “the whole idea of meaning.” In The Tiny Bee That Hovers at the Center of the World, he leads the reader across the landscapes of his extraordinary mind, moving from the decaying architectural wonder that is the town of Arcosanti, Arizona, to driving the vast, open Texas highway in his much-abused college VW Beetle, to the mysterious, canal-riddled Martian landscape that famed astronomer Percival Lowell first set eyes on, via his telescope, in 1894. Searcy does not come at his ideas directly, but rather digresses and meditates and analyzes until some essential truth has been illuminated—and it is in that journey that the beauty is found.

About seventy miles north of Phoenix, Nancy (my girlfriend then, eventually my wife) spots a highway sign for Arcosanti. Good Lord. I had no idea. I would have thought it too abstract for a highway sign. This way to the strangely pure yet vague accumulation of ideas toward what the future ought to look like made of sand, as it seemed to me (or sandy concrete, I suppose), back in the seventies when you’d hear about it now and then, get glimpses on the news, a Sunday feature on the visionary architect Paolo Soleri and his followers who, termite-like, appeared to form those weird utopian architectural notions out of desert. I can’t see anything out there but scrubby desert. We are on our way to Flagstaff, to Lowell Observatory. That’s where Percival Lowell glimpsed canals on Mars a hundred and twenty years ago. His great refracting telescope, still maintained in its dome, at the time was among the largest in the world, with a twenty-four-inch objective lens by Alvan Clark and Sons, whose achromatic optics are, to this day, unexcelled. There’s a famous photograph of Lowell peering through it—suit and tie, his cap on backward, sitting in a simple wooden chair like a kitchen chair on a platform crankable into position along the rails of this contraption like a giant library ladder. Such an awkward and elaborate presentation of himself to the tiny eyepiece of this brontosaurian instrument angled down to him for all the world as if he were the object of inspection. As I guess he would eventually become.

We’ve left the highway. I have learned to trust her instincts with regard to these departures from the path. We take a long, descending dirt road toward a scatter of undistinguished structures and storage containers, old construction equipment imperfectly hidden behind the ragged yellow plastic slats woven into a chain-link fence. I’m not encouraged. But, descending a little farther to the parking lot, we see we’re on the back side. Not the side for presentation. We’re to struggle a bit. I see. Get past the stages of denial, disbelief to find ourselves at last arrived into the dreamy concrete future Paolo Soleri had in mind—and kept in mind, though it would seem in the minds of fewer and fewer believers all these years.

I can remember in the seventies really admiring those somehow virtuous cast-bronze bells from Arcosanti. People hung them up like prayer flags—souvenirs of our better selves. Our better future selves, I guess. My friend Tim Coursey had one hanging from a tree in his backyard. I liked the strain of its exoticism. Such a tiny, ordinary thing to be utopian, futuristic. Look! A wind chime from the future! How can you tell? Well, first of all it’s asymmetrical—a sign of freedom, spiritual progress, I should think. And then the uninterpretable abstract decoration. Though the blue-green oxidation might incline one to imagine great antiquity. There’s always that ambivalence. The way exoticism doesn’t care in which direction it departs the here and now. It’s the departure that beguiles and mystifies us, I suppose. Yet it seemed clear that here was a little bell from the future in my friend’s backyard. We’d hear it ring sometimes and think, Well here it comes. The future is approaching.

So, how strange to come upon that future now, descended into. Not approached across the endless nowhere I had always imagined—like a mirage, like something glimpsed out there in the middle of Ray Bradbury’s Martian desert, where it’s always seemed the future ought to be. But down a dirt road, past the junkyard. You descend into a recognition of it—still and always under construction. Oh yes—there’s that concrete tower of round-fenestrated cubes. And yonder—now that I can see them; from the road I’d thought them Quonset huts—the arching ever-futuristic, open concrete barrel vaults and the concrete semi-hemispheres with their archaic/futuristic crests. All set, like the Acropolis (whose elevated prospect Arcosanti shares when viewed from the proper side, the valley side), among the tall, funereal cypresses, which seem to serve—ambivalent, perverse—a broadly classicizing, antiquating function, as if thus to make the future more conceivable, accessible, presented as another sort of Periclean Age and, in a way, a curious way in its eternal incompletion, as a ruin.

This is the parking lot to anyplace—apartment complex, supermarket. Surely, I am thinking as we pass along the walk, this delicate notion will collapse upon approach. But maybe not. It blurs but holds. That strange ambivalence carries through, fills up the three-story concrete interior of the gaping-huge-round-windowed visitors’ center and café, where I’ve sat down with Nancy and the best lasagna (vegetarian) I’ve ever had and feel myself, right off the bat, to have arrived at a sort of physical realization of that vague and inexplicably nostalgic sense of the future I received in contemplating certain science-fiction paperback cover art in the 1960s. I declare this is the best place in the world. It’s all summed up, it seems to me, in the ambivalence. The future and the past. I sense, somehow, that it’s all worked out. The aspiration. Incompletion. The lasagna. It’s lasagna from the future. Try some, Nancy. She declines but seems to understand. She notes the gentle shabbiness that hangs about the future. Finds it touching, even comforting to not be able to tell if it’s construction or decay. To not quite know in which direction the arrow swings.

God, how I loved that gauzy science-fiction paperback cover art. At its very best it seemed to present a sense of strangeness as a pure and separable quality—a condition to be attained, or perhaps reduced to, in the future. You would get this Yves Tanguy–like space but gone all atmospheric, all worn out. This hazy, dusty, sad uncertainty way out to a faint horizon where some marvelous futuristic apparition could be glimpsed beneath a pair of moons or a red, inflated sun. Sometimes that strangeness out there seemed to be a city. And that’s what would really capture me. Suggesting that one could gather oneself toward that idea somehow. That we might gather into the future—and we’re talking wildly distant future here—into such rarefied and lonely concentrations of ourselves like fluff from cottonwood or something. Beautiful, accidental residue of us. That can’t be longing that one feels. That makes no sense. What, then? It looks a lot like eighteenth- or nineteenth-century Romanticism, doesn’t it. At first. Those lacy, asymmetrical spires within that shining crystal dome out there in the red light of the dying, setting sun at the edge of everything on the 1957 Crest Books paperback cover of City at World’s End by Edmond Hamilton. I doubt I ever read it. But the cover is enough. Just look at that. That should be tugging those same heartstrings tugged by ruins in the sunset in some old Romantic landscape. Wouldn’t you think? A twelve-year-old of course would not. Or would not know. Or would not care.

So, after lunch we take the tour into the waning afternoon of Paolo Soleri’s great experiment in urban sprawl reversal and collective human efficiency. One has to nod politely at the official non-futurist line—a theoretical point of style. But come on, look. It’s plain to see that it is the struggle toward the future that appeals, the visible gesture that stands out in the fading light—in which we sense ourselves suspended like those spacey-looking bells they’ve always cast right here and sold to pay the bills, to keep it going. It works out. It all comes down to the bells in a way.

Soleri started with the bells, our tour guide tells us. No one seems to know exactly when or how the impulse struck. But first ceramic bells—produced by casting liquid clay, or slip, into a mold dug into earth. Eventually bronze bells cast into silt on a similar principle. And then—all this quite early in his career—a conceptual leap: ground-casting of concrete architectural forms—like the dramatic cubes and domes and vaults and “apses” here assembled into a complex not much larger than a shopping mall yet clearly, monumentally expressive of his vision of a vastly greater “arcological” structure into which society’s functions might be concentrated, gathered into a more benign and rational relation to the world.

Soleri’s written thoughts (and one suspects that few were left unwritten) tend to take the form of grandiose pronouncements. There’s a sense of a man beset by inspiration. Finger always in the air. Yet I imagine—I can’t help but find it touching to imagine back there somewhere—an unformulated, undramatic, sudden, quiet insight into something like the future of us all, the misty science-fiction paperback-cover future of us, gathered out of the earth like bells. The will to love and kindness and efficiency cast in place and softly ringing in our ears.

David Searcy is the author of Ordinary Horror and Last Things, and the recipient of a grant by the National Endowment for the Arts. He lives in Dallas, Texas. 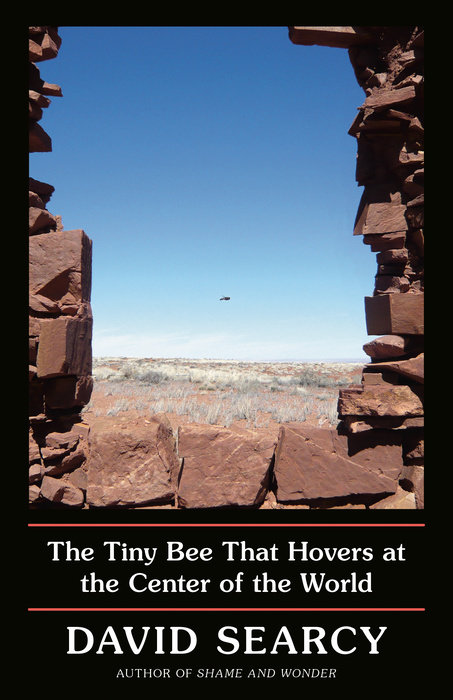