Be proud, be loud, be flavorful. From the beloved, fiercely inclusive BuzzFeed cooking brand comes 75 innovative recipes and inspiring stories from prominent LGBTQ+ cooks and foodies.

Tasty has always been the place to turn for good eats. Now, it’s also the place to turn for a community. Here, stories of love, pride, and acceptance—and the important role that food can play in that journey—accompany the innovative yet totally doable recipes you know to expect from Tasty.

Compiled by food writer Jesse Szewczyk and contributed by 75 cooks and celebrities from across the queer community such as Ted Allen, Anita Lo, and Rick Martinez, these recipes are not only delicious, but also meaningful. These folks bring you the dishes they love most, from Taco Potatoes with Spicy Ground Turkey to Everything Bagel Beignets, and from Beer-Steamed Crabs with Spicy Vinegar Dipping Sauce and Corn Salad to Fudgy Miso Brownies.

Pull up a chair and take your seat at the table with Tasty Pride.

An excerpt from Tasty Pride

When I first entered culinary school in 2010, an instructor referred to one of the few openly queer students as “twinkle toes” in front of the whole class—and I was infuriated. I was mad at the teacher for singling him out. I was mad at the student for not standing up for himself. But most of all, I was mad at myself. Because even though I was a member of the LGBTQ+ community, I didn’t say a word. Instead, I stood by and let it happen. And I knew that for the rest of that day, and for the rest of my time within those culinary school walls, while I was in the kitchen, I would continue to pretend to be someone I wasn’t. I had started working in restaurant kitchens as a high schooler in the Midwest several years earlier, and had run into very few cooks who looked or acted like me.

At the time, I was coming to terms with my own sexuality, but was not yet ready to share it with the world. There hadn’t yet been many outwardly queer chefs writing cookbooks or appearing on television, so I just assumed my culinary aspirations didn’t align with my sexuality. Restaurant kitchens have historically been portrayed in media as spaces that reward cisgender, straight, white men. So, for the sake of my future career, that’s the identity I committed to while in the kitchen. I was a proud gay man when I was with my friends and family, but in the kitchen I was someone else.

It wasn’t until I moved to New York in 2017 and found a community of queer cooks who were loving, supportive, and—to my pleasant surprise—wildly successful that I began to publicly celebrate and embrace who I truly am, both inside the kitchen and out. Fueled by this renewed sense of confidence and pride, my professional life changed for the better. Now, as a food writer with the honor of working for Tasty, one of the largest and most recognizable food media brands in the world, I want to use my reach to showcase the talents of queer cooks. I hope to provide others with that same sense of pride I felt when I first moved to New York and witnessed my community thriving. I want to pass on the gift of finding joy in each other’s successes, and thanks to Tasty’s support, I am finally able to do so.

With this cookbook, I wanted to curate a collection of recipes and stories to show people like my younger self that queer professionals are thriving in the culinary industry. I wanted to present the incredible accomplishments of queer cooks, proving just how much they shape the food world. Most of the recipes in this book come from people who were complete strangers to me before the project began, and many of them are the pioneers who have paved the way for more inclusive, loving, and accepting kitchens. From Julia Turshen’s comforting spaghetti and turkey meatballs (see page 81) to Ruby Tandoh’s  sweet and salty Fudgy Miso Brownies (page 175), these recipes illustrate the rainbow of diversity and talents within the community. Whether you’re a member of the community
or a supportive ally searching for mealtime inspiration, you’re sure to find a recipe you’ll love within these pages.

Beyond the fantastic recipes, what makes this book so special are the stories behind them—stories of love, acceptance, and pride. Along with a recipe, I asked every contributor to share how food has shaped their identity.

Here are recipes that celebrate the triumphs of our community, like Bill Yosses’s Dark Chocolate Mousse Cake (page 196), which graced the White House dinner table during the administration of President Barack Obama, the first president to ever voice his support for marriage equality. And here are recipes that brought relief during life’s defining moments, like Amelia Rampe’s Cauliflower Sandwiches (page 137), which provided comfort and support the night she and her daughter came out to each other. Shrimp and Pork Wontons (page 59) helped strengthen the bonds among Melissa King’s chosen family, and Karen Akunowicz’s hearty Pasta Puttanesca (page 138) charmed a new girlfriend. Food has the unique power to connect, nourish, and inspire, and that’s exactly how I hope you’ll feel as you cook your way through this book.

But Tasty Pride is not simply a cookbook; it’s also an investment in our community. All the contributing cooks were paid for their recipes, and, upon the book’s publication, Tasty and Penguin Random House have committed to donating $50,000 in total to GLAAD, the antidefamation organization founded by LGBTQ+ people working in the media.

Thank you to the wonderful queer cooks who made this book and its subsequent donations possible. Your stories will resonate within the hearts of many, and your recipes will bring loved ones together. And for those who feel as though they need to hide or change who they are in order to succeed in the food industry, this book is proof that you can be 100 percent authentically yourself, both inside and outside the kitchen.

With love and pride,

Tasty is the world’s largest social food network, reaching more than 500 million people around the globe with its signature fun, easy, and delicious video recipes. The brand is focused on making cooking practical and accessible for beginner cooks and expert chefs alike. Launched in 2015, Tasty has attracted more than 65 billion video views and is the biggest franchise on Facebook, reaching one in four users every month. It has studios in Los Angeles, New York, London, Paris, Berlin, Mexico City, and São Paulo, and a full product line including cookbooks, pots and pans, kitchen gadgets, and an assortment of grocery items spanning the wine section to frozen foods.

Jesse Szewczyk is a food writer and recipe developer based in New York. He graduated from The Culinary Institute of America and has had work published in Bake from Scratch, BuzzFeed, Food52, The Kitchn, Honest Cooking, Tasty, and several other publications. 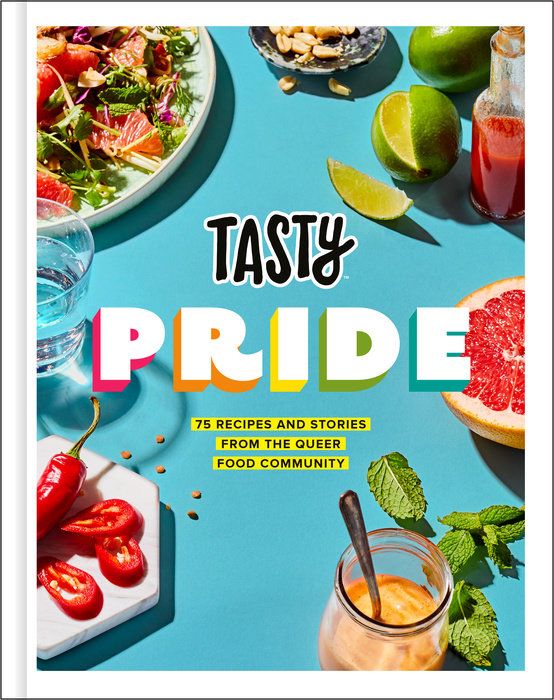