The fourteen essential conversations to have with your tween and early teenager to prepare them for the emotional, physical, and social challenges ahead, including scripts and advice to keep the communication going and stay connected during this critical developmental window.

“This book is a gift to parents and teenagers alike.”—Lisa Damour, PhD, author of Untangled and Under Pressure

Trying to convince a middle schooler to listen to you can be exasperating. Indeed, it can feel like the best option is not to talk! But keeping kids safe—and prepared for all the times when you can't be the angel on their shoulder—is about having the right conversations at the right time. From a brain growth and emotional readiness perspective, there is no better time for this than their tween years, right up to when they enter high school.

Distilling Michelle Icard's decades of experience working with families, Fourteen Talks by Age Fourteen focuses on big, thorny topics such as friendship, sexuality, impulsivity, and technology, as well as unexpected conversations about creativity, hygiene, money, privilege, and contributing to the family. Icard outlines a simple, memorable, and family-tested formula for the best approach to these essential talks, the BRIEF Model: Begin peacefully, Relate to your child, Interview to collect information, Echo what you're hearing, and give Feedback. With wit and compassion, she also helps you get over the most common hurdles in talking to tweens, including:

• What phrases invite connection and which irritate kids or scare them off
• The best places, times, and situations in which to initiate talks
• How to keep kids interested, open, and engaged in conversation
• How to exit these chats in a way that keeps kids wanting more

Like a Rosetta Stone for your tween's confounding language, Fourteen Talks by Age Fourteen is an essential communication guide to helping your child through the emotional, physical, and social challenges ahead and, ultimately, toward teenage success.

An excerpt from Fourteen Talks by Age Fourteen

You and your child have always shared a special language. When they were just an infant, it’s how you knew which cry meant “I’m hungry,” and which meant “I need a diaper change.” It’s how the mysterious squeal “Bargdor!” that stymied babysitters or grandparents was instantly clear to you as your two-year-old’s way of asking for her stuffed dog, Benjamin. From the day they were born, you and your child have been developing your own language, together.

At around age eleven, kids begin the normal and necessary work of pulling apart from their parents. As tweens set their feet on the long path to adulthood, the first and most important thing they do is begin to establish their own identity. Simply put, this means figuring out who they are apart from you.

Just as the job of language is to tie groups together, the job of tweens is to break ties apart. Although the process can be painful, kids who don’t begin to assert their independence in adolescence have difficulty establishing healthy partnerships later in life. A key element to avoiding toxic or codependent relationships is for each party to have a strong sense of self, but this only happens when we allow young people a chance to figure out their own styles, values, interests, and beliefs. While it helps to know this kind of separation behavior is on-track developmentally, and your child isn’t surly or contrarian for no good reason, it can still feel like rejection, made even more difficult when your child starts being exposed to a wider array of experiences, many potentially dangerous. It’s natural that you’ll want to protect and support them through it all.

Protecting and supporting are hard to do when kids become tweens, because one of the first things they often do is shut down communication. Parents, often blindsided by this, turn up the volume. They become like tourists in a foreign land trying to figure out how to communicate with the locals. Have you ever witnessed a frustrated adult trying to get their point across to an aloof twelve-year-old? They’re reduced to saying the same things over and over again, increasingly more slowly, and loudly with every iteration. “I. Said. To. PUT DOWN. THE IPAAAAAD!” Repeating yourself, shout-talking, or slowing way down when trying to get your point across to your middle schooler are the equivalent of an American tourist in Italy adding an “ah” sound to the end of their words. “I likah the pizza pleasah.” It doesn’t get the job done, and you come off sounding clueless.

So how do we reconcile a tween’s need to separate from us with our parental desires and obligations to keep them safe, smart, and connected? We learn to speak a new language. This isn’t intuitive, but it will be easier than you think. This book will be your guide and translator.

Since I started working with tweens and their parents, a lot has changed. Back in 2005, social media wasn’t on anyone’s mind, and the most exciting piece of technology a kid could get their hands on was an iPod touch. Suicide rates have risen by 30 percent since 2000 with the highest spike seen in girls ages ten to fourteen. By age fifteen, almost 30 percent of teens have had at least one drink. Middle schoolers who tried vaping increased by 48 percent in 2018. Diagnoses of clinical depression in adolescents have increased by 37 percent since 2005. School shootings have become common news, and lockdown practice is a regular part of your school kid’s life. But as the saying goes, the more things change, the more they stay the same. Though the lives of young adolescents seem more complicated than ever, the way to help them remains as simple, predictable, and reliable as ever: Talk with them. Not to them or at them, but with them.

The kids I work with tell me the same thing. They wish their parents would talk with them more about these issues. So, what stops parents from doing this? It certainly isn’t a lack of desire.

Take, for instance, my friend Sonia, a working mother who always prided herself on her close relationship with her daughter, Elaine. They were the kind of duo who shared private jokes, enjoyed “girl time” on weekends, and chattered away like old friends, whether in the car or sitting together at a school function. But when Elaine hit seventh grade, she started pulling back from Sonia, spending more time away from the family, and resisting her mom’s attempts to crack shared jokes. When Elaine began to rush through family dinners, kept her headphones on during car rides, and turned down offers for manicures on the weekend, Sonia started to worry. “I’d offer to do the things she loved, like we always used to do. But she didn’t want to do anything. I started offering to let her bring a friend. But she said no even to that.” Sonia didn’t want to give up on her relationship with Elaine, so she began pleading. Ultimately, her husband made a comment that Sonia was “acting like she was in middle school herself, trying to get the popular girl’s attention.”

Sonia became so worried about her daughter pulling away that she installed monitoring software on Elaine’s phone and read through her texts and social media conversations. She even found Elaine’s diary, read it without her knowing, and discovered that a boy in the grade above Elaine had been asking Elaine to send him a picture without her shirt on, as well as Elaine’s indecision about how to respond to him. Sonia found herself in a predicament, trying to figure out how to let Elaine know she knew this, without revealing her hand and possibly losing her daughter’s trust entirely. This is when she reached out to me, feeling lost and searching for advice on her next step.

Hank, a single dad of both a son and daughter, found himself in a different predicament and came to me when his thirteen-year-old son, Elijah, was caught drinking at a party. Hank felt blindsided when he got the call from the parent who had hosted the party. Hank had talked openly to his children about his family’s history with alcoholism and the dangers alcohol presented, particularly given their genetics. Hank felt sure Elijah would have thought twice before drinking—especially at such a young age—but it seemed that his candor about their family’s struggle hadn’t been a deterrent at all. Since Elijah didn’t demonstrate the ability to think clearly when it came to alcohol consumption, Hank opted for the harsh punishment of four months’ grounding instead of more talk, hoping that might teach Elijah the lesson he needed to learn about the dangers of alcohol consumption.

Lots of us can relate to these situations. We feel rejected, then worried, then trapped in a chess match with our kids, unsure how to strategize our way out of a corner. Both Sonia and Hank not only had a deep desire to connect with their child, but they had valuable information to share. Yet in each scenario, when their attempts to talk had failed, both parents switched gears, sacrificing conversations for what they saw as the more critical imperative of keeping their tweens safe, which they attempted to do by constant monitoring. Hank kept his son at home where he could always keep an eye on him; Sonia tracked her daughter’s conversations online and outright spied on her by reading her journal.

Sometimes, making your tween’s world smaller is the best way to keep them safe. This is not a book that shrugs off discipline and boundaries. But sometimes, parents resort to the “shut it down” approach because they feel they lack other viable options. They don’t trust that their kids will make smart decisions, so they deny them the opportunity to make any decisions. The irony is, kids don’t learn how to make smart decisions without practice. Given that kids need to have experiences, good and bad, to learn from, the best thing a parent can do is help them evaluate, process, and reflect on what works and what doesn’t. That only happens through good conversations.

This book gives you a way to talk with your kid, even though your kid has reached an age when they will naturally start to resist. In fact, when that starts happening, it’s actually a sign that it’s more important than ever to have meaningful conversations. One thing I hear in my work, particularly from parents who disagree with my approach, is “My job isn’t to be my kid’s friend. My job is to keep them safe.” This sentiment often goes hand in hand with a more authoritarian parenting style. Confusing curiosity with leniency, or empathy with a need for approval, is a dangerous mistake. Research and common sense tell us that kids who feel comfortable talking with caring adults about their problems are healthier, happier, more resilient, and better poised for future success.

As you read, you’ll learn how to get over the most common hurdles in talking to tweens: knowing what conversations are most important, having a way to get started that won’t irritate your kids or scare them off, figuring out what to say and what phrases to avoid, keeping them engaged in conversation, and exiting conversations in a way that keeps them wanting more. Keeping kids safe is all about having the right conversations at the right time.

Michelle Icard is a member of the Today show parenting team and NBC News Learn. The author of Middle School Makeover, her work has been featured in the Washington Post, Chicago Tribune, The Christian Science Monitor, Redbook, Time, and People. Her leadership curriculum for middle schoolers, Athena's Path and Hero's Pursuit, have been implemented at schools across the U.S., and her summer camp curriculum is offered at more than twenty camps each summer. She lives with her family in Charlotte, North Carolina. 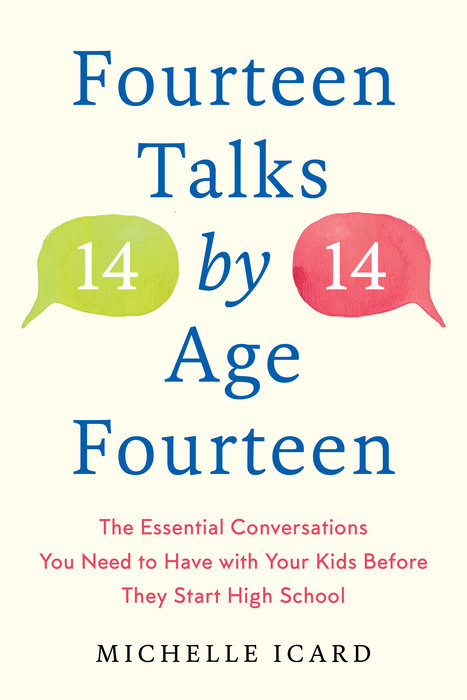