An innovative 16-day plan that combines the fat-burning benefits of a ketogenic diet with the brain-clearing and keto-flu protection of alkaline food, by the USA Today bestselling author of The Hormone Fix.

Are you having a hard time losing weight? Do you suffer from brain fog, lack of focus, or poor memory? Do you run out of energy halfway through the day? Do you have unwanted cravings? If you answered “yes” to any of these questions, join the club! In this revolutionary book, Dr. Anna Cabeca shares a proven way to finally give you the results you want, need, and deserve.

There is no question that going keto works. This strict high-fat/low-carb diet denies the body glucose as a main source of energy and instead promotes the production and use of ketone bodies as fuel. It’s a great way to move you off a weight plateau, gain willpower, and get results fast. But going keto also often results in gastrointestinal discomfort, low energy, and moodiness—known as the “keto flu”—which makes the diet hard to sustain.

The solution? Add alkaline foods—leafy greens, other vegetables, broths, healthy oils, nuts, and seeds—for a lifestyle that’s more sustainable and easier on your body. In other words: Go Keto-Green and thrive!

A triple-board-certified physician, Dr. Anna Cabeca developed her method through years of careful patient and test-panel research. In Keto-Green 16, she explains the science behind her innovation: Hormone production dips as a woman ages, leading to increased visceral fat. By pairing keto-diet staples with foods that bring the body’s pH to a more alkaline level, you’ll shed belly fat while balancing the hormones responsible for that bulkier midsection. And by fueling your brain with ketones—like rocket fuel instead of gasoline—you’ll make better decisions, including healthier choices for what to eat. The unique nutritional balance of the Keto-Green 16 diet also boosts mood.

With 16 days of what-to-eat instructions (including a version for vegetarians and vegans); more than 50 delicious breakfast, lunch, dinner, and snack recipes; information about the 16 best alkaline foods; a 16-hour intermittent-fasting strategy; 16-minute HIIT exercise routines; and a chapter outlining the specifics of the nutritional plan just for men; Keto-Green 16 will ensure that you skip the flu and get on with rapid and amazing weight loss.

An excerpt from Keto-Green 16

In my work as a physician and hormone expert, I hear from women (and men too) all the time that no matter what they do, the pounds won’t go. They see their midsection thickening, even if they’re eating healthfully and exercising. They’ve had to buy bigger clothes to compensate for weight landing on their tummies and hips. As successful as they are in other areas of their lives, they feel defeated when it comes to weight loss. And they beat themselves up over it.

Right now, normal-weight Americans constitute a minority. Two out of three adults and one out of three children are either overweight or obese. This crisis has reached epidemic proportions in adults, and it’s about to do the same in kids.

A big problem behind this epidemic is that for too long, overweight people were told: “Just eat less, have smaller meals and more frequent meals, have better willpower, and you’ll be fine.” But today we know that these recommendations greatly oversimplify the issue.

I know that your creeping weight gain is not because you’re plowing through bags of candy. It is because your hormones are shifting and have become unbalanced. They are working against you and your metabolism, and against your sincerest efforts to lose weight. So it’s not your fault if you have trouble shedding pounds. Stop blaming yourself. It’s your hormones.

As we get older, part of the weight we put on, especially during menopause, is stored as subcutaneous fat—fat that’s just under the skin in our thighs, hips, tummy, and elsewhere. And some will be packed away as visceral fat—near our vital organs in the abdominal area, as well as around our blood vessels.

Subcutaneous fat and visceral fat differ not only in their bodily position but also in the threat they pose to your well-being. Laboratory analyses of visceral fat cells have revealed that they’re more biologically active than subcutaneous fat cells. Fatty acids and triglycerides (blood fats) move quickly into visceral fat cells, which serve as short-term storehouses for fats. If you’re eating excess calories, some of them will be readily deposited in visceral fat, and your waistline will thicken—possibly to a dangerous width.

What constitutes “dangerous”? For your best health, your waist should be less than 35 inches around for women, and less than 40 inches for men. If it’s larger than that, you may want to talk with your doctor, because higher waist circumference is associated with a greater risk of problems such as heart disease, high blood pressure, and diabetes.

This weight gain can creep up even while you’re maintaining the same diet and exercise routine, and it’s very frustrating. It’s enough to make you want to throw in the towel, stop trying to get trim, and accept the stubborn weight as inevitable.

But it’s not inevitable.

If you are among the many women who have tried different diets and exercised diligently but have not lost weight, you probably have a hormonal imbalance. When certain hormone levels change or drop—as they do in the years leading up to menopause—they encourage the body to store fat.

To resolve this problem and get in shape, you must address these hormonal imbalances. Any diet you try to follow that does not tackle hormones will not work, at least not in the long term, and you’ll be right back where you started, possibly with more unwanted pounds.

Hormones are chemical messengers, and more than 150 of them run through your body. They impact many functions in your body, including metabolism, reproduction, blood sugar levels, blood pressure, energy levels, kidney function, sleep patterns, aging, appetite, and sex drive.

When it comes to hormones, your brain is command central. The brain prompts the production of hormones via three small but powerful endocrine glands in the brain: the pituitary gland, the hypothalamus, and the pineal gland.

Known as the master gland, the pituitary gland produces hormones that act on the adrenal glands, thyroid gland, ovaries, and testes, which in turn produce other hormones. Through secretion of its hormones, the pituitary gland orchestrates metabolism, growth, sexual maturation, reproduction, blood pressure, and many other vital physical functions and processes.

The hypothalamus is the link between the endocrine and nervous systems. It produces releasing and inhibiting hormones, which stop and start the production of other hormones throughout the body. Some of these hormones include anti-diuretic hormone (ADH), which increases water absorption into the blood by the kidneys; corticotropin-releasing hormone (CRH), which stimulates the adrenals to release cortisol; growth-hormone-releasing hormone (GHRH), which is involved in the production of growth hormone; oxytocin, the bonding hormone; and other hormones involved in the function of the ovaries and testes, breast milk production, and the release of thyroid hormones.

The hypothalamus is in charge of the autonomic nervous system. As the name suggests, this system involves functions that are automatic, not requiring our conscious awareness. Examples of autonomic functions are breathing, hunger, and body temperature.

The pineal gland produces melatonin, a hormone that helps us sleep, age more gracefully, and maintain our circadian rhythm (a clock of sorts, in which our physiological processes are synced to the twenty-four-hour solar cycle of light and dark). Quality sleep and a normal circadian rhythm keep us healthy, and they balance hormones such as cortisol to help us maintain a healthy weight.

These glands and the hormones they produce rarely work solo; instead, they talk to each other and work together. What’s more, a dip in the amount of one hormone interferes with other hormones in a domino effect that can throw a host of bodily functions off-kilter. But when in harmony, your hormones function properly, you enjoy good health, your brain is sharp, and your weight is more easily controlled. And you’ll have a slimmer, more toned tummy.

To balance your hormones, you need to understand which ones are involved in weight gain and metabolism, why they might be out of whack, and how to correct them. There are thirteen usual suspects:

The hormonal changes we experience during our forties and fifties is why so many patients come in complaining about unexpected weight gain and say: “But Dr. Anna, I am not doing anything differently and I’m still gaining weight!” It’s your hormones’ fault, not yours.

Take Marlene, for example. She was low in only estrogen and progesterone and high in cortisol, according to her hormonal panels. Although she lifted weights regularly and ate healthy foods, she could not lose weight around menopause, and her waist began to gradually thicken. After reviewing her tests, her doctor advised that her number-one priority was diet. Specifically, she had to curb carbohydrates (pasta, breads, even grains). The doctor explained that, hormonally, Marlene’s body simply could no longer burn carbs the way it did in her youth.

Marlene and I met shortly after she got this explanation from her other doctor. Once I explained the Keto-Green protocol, she decided to give it a go. She was amazed at the quick results. In the first week she dropped seven pounds and felt more energetic, physically and mentally, than ever. After sixteen days she had lost a total of ten pounds and an inch from her waistline.

Prior to starting the diet, Marlene had trouble sleeping, with frequent awakenings during the night. The reason for this was that her cortisol levels were elevated at night, when they should normally be low. The diet helped restore her body clock so that cortisol would stay in balance—higher during the day to keep her alert, and lower at night to help her sleep. Only a few of her hormones were out of whack, but she got them back in balance by going Keto-Green. Marlene quickly kick-started her metabolism and overcame the hormone changes causing her symptoms.

You can figure out where your imbalances are coming from through testing, along with noting physical symptoms (which I’ve listed under each hormone in the following sections). We all go through hormonal shifts throughout our lives—caused by puberty, pregnancy, and especially menopause—so paying attention to the subtle signs is key. With the knowledge in this book, you can rebalance your weight-control hormones using the specific diet and exercise strategies I’ll provide.

Anna Cabeca, DO, OBGYN, FACOG, is triple-board certified and a fellow of gynecology and obstetrics, integrative medicine, and anti-aging and regenerative medicine. She has special certifications in functional medicine, sexual health, and bioidentical hormone replacement therapy. The author of the USA Today bestseller The Hormone Fix and Keto-Green 16, she is the creator of the highly acclaimed virtual transformation programs Sexual CPR, Magic Menopause, and Breeze Through Menopause; she offers keto-green nutrition plans to online subscribers; and she developed the adaptogenic superfoods drink Mighty Maca Plus as well as Julva vulvar cream. She has been interviewed by all the major television networks and has been featured in InStyle, HuffPost, and mindbodygreen. She lives in Dallas, Texas, with her daughters, horses, and dog.

by Anna Cabeca, DO, OBGYN, FACOG 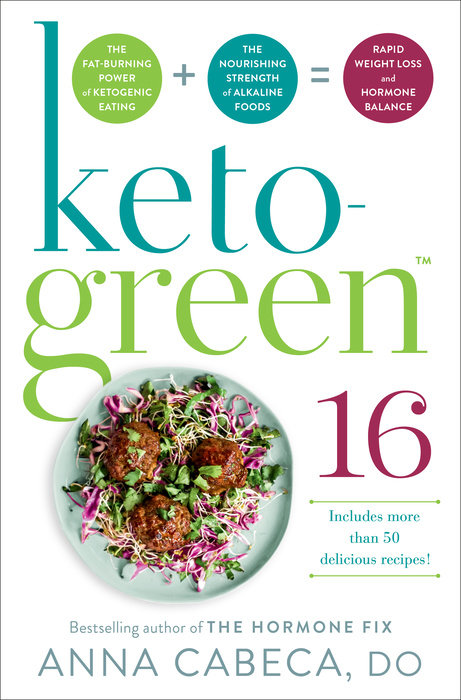