NEW YORK TIMES BESTSELLER • A heartwarming novel about secrets of youth rediscovered, hometown memories, and the magical moments in ordinary lives, from the beloved author of Fried Green Tomatoes at the Whistle Stop Cafe

“A gift, a blessing and a triumph . . . celebrates the bonds of family and friends—and the possibilities of recovery and renewal.”—The Free Lance–Star

Bud Threadgoode grew up in the bustling little railroad town of Whistle Stop with his mother, Ruth, church-going and proper, and his Aunt Idgie, the fun-loving hell-raiser. Together they ran the town’s popular Whistle Stop Cafe, known far and wide for its fun and famous fried green tomatoes. And as Bud often said of his childhood to his daughter Ruthie, “How lucky can you get?”

But sadly, as the railroad yards shut down and Whistle Stop became a ghost town, nothing was left but boarded-up buildings and memories of a happier time.

Then one day, Bud decides to take one last trip, just to see what has become of his beloved Whistle Stop. In so doing, he discovers new friends, as well as surprises about Idgie’s life, about Ninny Threadgoode and other beloved Fannie Flagg characters, and about the town itself. He also sets off a series of events, both touching and inspiring, which change his life and the lives of his daughter and many others. Could these events all be just coincidences? Or something else? And can you really go home again?

An excerpt from The Wonder Boy of Whistle Stop

Grady Kilgore, a big barrel-chested bear of a man in his seventies, had been the sheriff of Whistle Stop, Alabama, until 1958, when he and his wife, Gladys, had moved to Tennessee. Today, Grady had driven down to Whistle Stop from Nashville with his grandson and was standing on the railroad tracks, looking across the street to where the old Whistle Stop Cafe used to be. Kudzu vines had grown all over the buildings and had covered most of the block. It was hard for his grandson to tell what was underneath.

Grady pointed over to one of the buildings. “That’s the old post office that Dot Weems ran, and right there’s the cafe, next to Opal Butts’s beauty shop, where your grandma got her hair done up every Saturday morning.” Grady stood there looking around and was sad to see how much the place had changed since the last time he’d stopped by.

By now, the old two-lane highway from Birmingham to Whistle Stop had been bypassed by a new six-lane interstate, and most of the area was now just a dumping ground. Old rusty cars and trucks had been abandoned by the tracks, left to slowly fall apart. Empty beer cans and whiskey bottles were everywhere. And as a sad sign of the times, Grady noticed there was a lot of drug paraphernalia scattered around that hadn’t been there before.

The Baptist church, where he had heard Reverend Scroggins preach every Sunday, was now almost falling down, the stained-glass windows broken, the pews removed and sold. All that was left of the town were some of the old buildings and the old Threadgoode home, and that was barely standing. Vandals had pretty much destroyed everything else. Grady turned to his grandson and shook his head. “When I get to thinkin’ how this place used to be, and what it is now, it just makes me sick. It wasn’t never a fancy town, but it was clean. Now there’s junk scattered everywhere. And the old Threadgoode house is full of graffiti, the windows all knocked out. You’d never know to look at it now, but that house used to be the prettiest one in town. For the life of me, I still cain’t figure out why Whistle Stop went to seed like it did. I even heard the whole town was sold, and they were gonna knock it all down and build a tire factory out here.”

Grady looked across the street again and sighed. “I don’t know why they’re just lettin’ the old cafe sit and rot away like that. It just don’t seem right. That cafe used to be like going to a good friend’s house to eat. Two great gals ran it. Idgie Threadgoode and Ruth Jamison. You woulda loved ’em. Everybody in town used to eat there, all the railroad men and their families. Every Christmas Day their cook, Sipsey, and the gals would lay out a big spread, and we’d all go over and eat, open our presents, and sing carols.” Then, unexpectedly, Grady let out a little sob. He quickly turned away, pulled out a handkerchief, and blew his nose and looked apologetic.

“Sorry about that. Oh Lordy. I don’t need to go thinkin’ about the old days . . . but lots of good times were had in that old cafe with Ruth and Idgie. Ruth’s son, little Buddy, grew up in that cafe. Poor kid. Lost his arm when he wasn’t much older than you.” Grady then carefully folded his handkerchief and put it back into his pocket.

Then he said, “Now, you may not believe this, but a few years back on Christmas Day your grandma and me was over in Birmingham visiting Opal Butts, and while they were busy cooking up dinner, I snuck out and took a little ride out here. And I was standing right here, on this same spot we are now, when—real quiet like at first—I started to hear a piano playing and people laughing, and it was coming from over there, right where the cafe used to be. I looked around and there wasn’t nobody there, but I swear I heard it. What do you think it could have been?”

His grandson rubbed his hands together and said, “I don’t know, Granddaddy, but can we go now? I’m getting cold.”

Dot Weems was a friendly little woman who just loved to chat. When she was younger, she had hoped for a literary career on the order of her idol, Edna Ferber. But at seventeen, she had fallen in love with “the man of her dreams,” and had married Wilbur Weems instead.

Later she would often joke that even if she hadn’t become a famous novelist, she was still “a woman of letters.” Aside from single-handedly running the Whistle Stop Post Office for sixteen years, Dot also wrote and published a weekly newsletter reporting on all the town’s activities under a banner that read:

Dot had just sent out the week’s newsletter, and this morning people all over Whistle Stop were busy reading it.

Hi Gang. Well, I hope you all had a happy Thanksgiving. I know for sure that Wilbur’s old hound dog, Cooter, did. Yes, that was him you saw running through town Thanksgiving Day with my freshly cooked turkey in his mouth. The one he had just snatched off the table, the minute my back was turned, trailing my stuffing all through the living room. Honestly, men and their dogs! Thank heavens my next-door neighbor, Ninny Threadgoode, took pity on us and had us over for dinner or Wilbur and I would have gone turkeyless! And not only was Ninny’s turkey delicious, we also enjoyed Sipsey’s sweet potato pie that Idgie sent over from the cafe. So as Mr. Shakespeare says, “All’s well that ends well.” Yum yum.

But now to the important news: It seems we have a rare archaeological find right here in Whistle Stop! Where? According to Idgie Threadgoode, right in our very own backyard! Well, the backyard of the cafe, that is. Idgie reports that she and little Buddy were out in the back digging up red worms to go fishing with, when she dug up (hold on to your hats, folks) a five-million-year-old dinosaur tooth! Idgie has it out on display on the counter at the cafe for all to see, so if you want to take a look, go on over.

Good news from the beauty shop: I am also happy to announce that Opal Butts says she finally got the hair dryer to working again, so if you missed last week’s hair appointment, she will be working overtime to fit you in. I know the ladies who are going to the Elks Club dinner Saturday night will be happy to hear it. Me, too.

More good news: Sheriff Grady said that other than a few minor mishaps, involving a few of our citizens and too much “Old Man Whiskey,” we have been crime free for another year. Thank you, Grady.

P.S. Don’t forget to tell the kids to get their letters to Santa Claus written. Remind them that it’s a long way to the North Pole from Whistle Stop, and Santa needs plenty of time to make all those toys.


Later that night, Wilbur Weems, a tall, thin man, was laughing when he came home for supper. As he walked in the door, he said, “Well, Dot, thanks to you, everybody in town was over at the cafe today to see that darned dinosaur tooth.”

Dot was putting a bowl of mashed potatoes down by his plate. “I know. I went over myself. Do you think it’s real?”

Wilbur sat down and took a swig of iced tea. “Knowing Idgie, I doubt it. She just loves to pull jokes. Remember that petrified two-headed frog she had in a jar last year? I found out later it was rubber.”

“Oh yeah. She told me she bought it over in Birmingham at the magic shop.”

“Oh my,” Dot said as she sat down and passed him the cornbread. “What will that girl come up with next?”

“Who knows? But whatever it is, it will be fun, you can count on that.”

Fannie Flagg’s career started in the fifth grade when she wrote, directed, and starred in her first play, titled The Whoopee Girls, and she has not stopped since. At age nineteen she began writing and producing television specials, and later wrote for and appeared on Candid Camera. She then went on to distinguish herself as an actress and a writer in television, films, and the theater. She is the bestselling author of Daisy Fay and the Miracle Man; Fried Green Tomatoes at the Whistle Stop Cafe; Welcome to the World, Baby Girl!; Standing in the Rainbow; A Redbird Christmas; Can’t Wait to Get to Heaven; I Still Dream About You; The All-Girl Filling Station’s Last Reunion; and The Whole Town’s Talking. Flagg’s script for the movie Fried Green Tomatoes was nominated for an Academy Award and the Writers Guild of America Award and won the highly regarded Scripter Award for best screenplay of the year. Fannie Flagg is the winner of the Harper Lee Prize. She lives happily in California and Alabama. 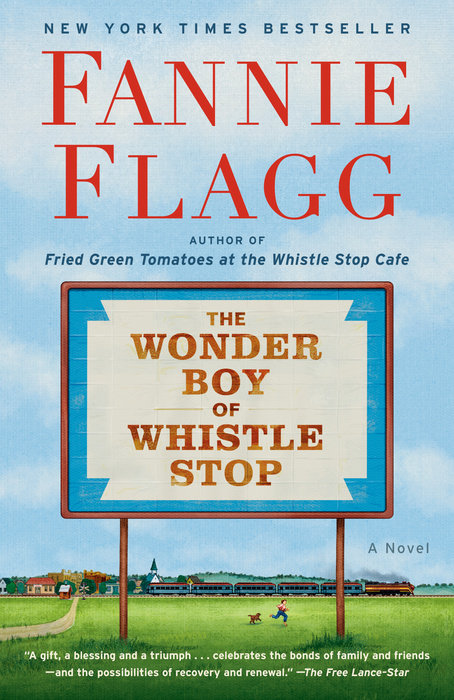