Do you have what it takes to succeed in any situation? According to a retired commander who ran training for Navy SEALs, true optimal performance goes beyond just skill. It’s all about THE ATTRIBUTES.

“Diviney’s incredible book explains why some people thrive—even when things get hard.”—Charles Duhigg, New York Times bestselling author of The Power of Habit

During his twenty years as a Navy officer and SEAL, Rich Diviney was intimately involved in a specialized SEAL selection process, which whittled a group of hundreds of extraordinary candidates down to a handful of the most elite performers. Diviney was often surprised by which candidates washed out and which succeeded. Some could have all the right skills and still fail, while others he might have initially dismissed would prove to be top performers. The seemingly objective criteria weren’t telling him what he most needed to know: Who would succeed in one of the world’s toughest military assignments?

It is similarly hard to predict success in the real world.

It happens often enough that underdog students accomplish exceptional achievements while highly skilled, motivated employees fail to meet expectations. Dark-horse companies pull away from the pack while dream teams flush with talent and capital go under. In working with and selecting top special operators for decades, Diviney saw that beneath obvious skills are hidden drivers of performance, surprising core attributes—including cunning, adaptability, courage, even narcissism—that determine how resilient or perseverant we are, how situationally aware and how conscientious. These attributes explain how we perform as individuals and as part of a team. The same methodology that Diviney used in the military can be applied by anyone in their personal and professional lives, and understanding these attributes can allow readers and their teams to perform optimally, at any time, in any situation.

Diviney defines the core attributes in fresh and practical ways and shares stories from the military, business, sports, relationships, and even parenting to show how understanding your own attributes and those of the people around you can create optimal performance in all areas of your life.

An excerpt from The Attributes

You saved for years for a trip to China and set aside a couple of days for a bus tour through the countryside. The scenery is spectacular, but the only stops are brief ones in remote villages miles from anywhere most tourists would see. In one especially tiny hamlet, the guide says you’ve got twenty minutes to look over a broad valley ribboned with late-afternoon shadows. You slip away from the group and follow a narrow path that winds up a small hill so you can get a better view in solitude. And it’s spectacular. You lose yourself in the moment, and the next moments, too. You look at your watch: You’ve been enjoying that view for half an hour.

You sprint down the hill, but it’s too late. The bus is gone, far down a sliver of dirt road so treacherous the driver couldn’t turn around even if he realized you were missing. Your pockets are empty: You left your phone, your cash, and your passport on the bus because you didn’t want to lose them. You look around. There are a half-dozen tiny houses, no vehicles, no power lines. An old woman gives you a curious look. You ask if she can help, but she can’t even understand you: You don’t speak Chinese and no one in the village speaks English. If you remember the itinerary correctly, the next stop is three hours away. It’ll be dark in two.

What do you do?

How about this scenario: You take the family to New York City to see the sights. It’s the first time the kids have been there, and they love it. You go to the Statue of Liberty and Times Square, and now you’re all going to ride the subway up to the Museum of Natural History. Except you’re on the wrong platform—this train is going downtown. You manage to corral two of the kids, but the five-year-old, too excited to hear you, slips through the crowd and onto the train by himself. The doors close and the train pulls away, then disappears into the tunnel with your child.

One more: It’s three months into a brand-new year. Things are going well. You’ve stuck to your resolutions, made progress on some long-term goals. Winter is beginning to wane and spring is on the horizon. Then a pandemic erupts across the globe. Seemingly overnight the entire nation shuts down, and the governor orders everyone to stay at home. The kids are out of school, you’re not sure if you still have a job, stores are closing, and there’s no toilet paper or hand sanitizer to be found. You’re not sure how scared you should be because so much is unknown about the virus: You’d probably recover, but what about your aging parents? Worse, you have no idea how long this will last. A few weeks? A few months? Or has everything changed forever?

Did you have a plan for that?

No, of course you didn’t. Those three scenarios have one thing in common: Each has plunged you into the depths of uncertainty, into a dark and unfamiliar place where panic rises with every heartbeat or confusion bleeds into fear. You can’t practice for moments like those, can’t learn any skills to navigate those first trembling moments. You pick up languages quickly? Not Chinese before nightfall. You’ve got big-city street smarts? Your five-year-old doesn’t. Were you ready for the economy to grind to a halt, for a new normal of physical isolation? Was anybody?

But you still have to act. In such extreme situations, how you perform is much less about what you know than who you are.

What matters more are your attributes.

Attributes are wired into our internal circuitry, always running in the background, dictating how we behave and react and perform. Think of them as the computer code behind an app on your phone. You tap an icon and a program opens, maybe your email or a game or the weather forecast. That’s a visible behavior, an obvious and predictable cause and effect. Tap, open. For most people on most days, that’s enough information to work with: If I touch this icon, a certain thing will happen, and if I touch this one, a different, yet still certain, thing will happen. Apply a skill and get a result.

What most people never consider, though, are the thousands of lines of code—the average iPhone app has fifty thousand—that determine how an app functions. Think of that code as a collection of attributes. Each app has its own unique combination, but there’s usually no need to care about what it might be. If you want directions to the beach, you need to know which icon to tap for the GPS, not how to write code. Your home screen is neatly ordered, the apps are clearly identified, and you know what to expect when you click on any particular one.

But those little pictures don’t actually do anything. What you see—the icon that opens the app—doesn’t drive performance. The code, the unseen programming, does that.

That code is pretty important.

People are more complicated than apps, of course. None of us is siloed into a singular function, capable only of texting or posting Instagram stories. But the principle is the same: We all have an internal coding, a specific combination of attributes that guide our performance. Are you highly adaptable with a strong sense of humility but low accountability? You’ll perform differently than someone who’s cunning and disciplined and fears rejection. Neither is better or worse—for our purposes, consider attributes as neutral traits wired into us by both nature and nurture; they are neither moral failings nor superior accomplishments.

Nor should attributes be confused with personality traits. A personality is built from patterns of behavior that emerge over an extended period of time. It’s an outward expression of all the things that make you you—your skills, habits, emotions, perspectives, and, yes, attributes, all blended together. A multitude of factors influence your personality, from genetics to upbringing to environment. Attributes are just one of those elemental ingredients.

But it’s important to remember that attributes are always running in the background. Highly challenging situations, especially ones rife with uncertainty that force you to operate on instinct, will bring them to the forefront. But your levels of resilience and self-efficacy also influence how you perform every day; your authenticity and empathy impact how you treat others and how they perceive you. Attributes also affect how people—teams, managers, and subordinates, spouses, children, and friends—interact with each other; a dozen competent, skilled colleagues might be a disaster working together, while a collection of seemingly average individuals excel as a collective. Attributes can suggest who’s an effective leader and who’s a loyal follower.

While attributes are part of everyone’s circuitry, they’re not immutable. They can be tweaked and modified. Imagine that each attribute has its own sliding dimmer switch. If you have a very low level of, say, adaptability, the plastic slider will be set near the bottom; and if you have a high level of humility, that switch will be near the top. Those switches are pretty stubborn, too, because attributes tend to have natural set points in each of us. But they can be moved. With effort and practice, you can shift levels up or down, increase this trait and dampen that one, as you think is necessary.

You can’t manipulate the attributes in other people. But you can learn to recognize them, which is extremely useful. If you want to understand human performance—yours and others’—the first step is to understand attributes.

I learned about attributes the hard way, on the job and under pressure from the top.

In 2010, I was in charge of training for one of the premier special-operations units on the planet. Our command selected candidates from other spec-ops teams, men who already had proven themselves to be exceptionally skilled and committed. One Friday afternoon, I was sitting across a small table from one of those men, still sweaty in his fatigues from a long day of training. He was a Navy SEAL with eight years of experience behind him, a seasoned warrior who’d completed dozens of missions. His record was saturated with glowing reviews and recommendations from his superiors. He was also recognized as a mentor to younger, less experienced guys, and he’d been promoted at every available opportunity, often early.

On paper, he was perfect. But three weeks into a nine-month program, we already knew he wasn’t going to make it.

Rich Diviney is a retired Navy SEAL commander. In a career spanning more than twenty years, he completed more than thirteen overseas deployments--eleven of which were to Iraq and Afghanistan. As the officer in charge of training for a specialized command, Diviney spearheaded the creation of a directorate that fused physical, mental, and emotional disciplines. He led his small team to create the first ever “Mind Gym” that helped special operators train their brains to perform faster, longer, and better in all environments—especially high-stress ones. Since retirement in early 2017, Rich has worked as a speaker, facilitator, and consultant with the Chapman & Co. Leadership Institute and Simon Sinek Inc. He’s taught leadership and optimal performance to more than five thousand business, athletic, and military leaders from organizations such as American Airlines, Meijer Grocery, the San Francisco 49ers, Pegasystems, Zoom, and Deloitte. 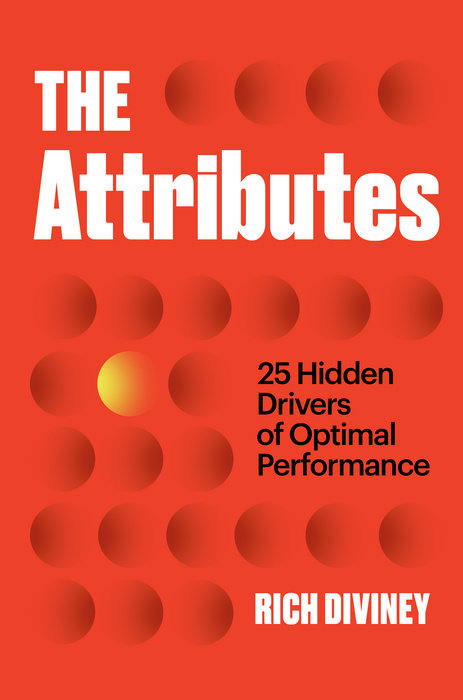