From the New York Times bestselling author of Something in the Water and Mr. Nobody comes “an unputdownable mystery about the nightmares that abound in the pursuit of Hollywood dreams” (Caroline Kepnes, author of the You series).

A woman has gone missing. But did she ever really exist?

A leading British actress hoping to make a splash in America flies to Los Angeles for the grueling gauntlet known as pilot season, a time when every network and film studio looking to fill the rosters of their new shows entice a fresh batch of young hopefuls—anxious, desperate, and willing to do whatever it takes to make it.

Instead, Mia Eliot, a fish out of water in the ruthlessly competitive and faceless world of back-to-back auditioning, discovers the sinister side of Hollywood when she becomes the last person to see Emily, a newfound friend. Standing out in a conveyor-belt world of fellow aspiring stars, Emily mysteriously disappears following an audition, after asking Mia to do a simple favor. But nothing is simple. Nothing is as is seems. And nothing prepares Mia for a startling truth: In a city where dreams really do come true, nightmares can follow.

An excerpt from The Disappearing Act

The Good with the Bad

The tube carriage rattles and jolts around us as we clatter along the tracks deep beneath the streets of London. And I feel it again, the familiar tug of the stranger’s eyes on me, staring.

I’ve been in their house. Or at least they think I have, but I don’t know them. We’re friends already, or we’re enemies, but I don’t know which. I’m part of some story they love or hate. I’m part of the story of who they are. They’ve rooted for me, cried with me, we’ve shared so much, and now I am right here in front of them. Of course they’re going to stare. I’m the unreal made real.

On the fringes of my awareness I feel the figure finally break the connection and whisper to the person beside them. I try to focus on my novel, to let my breath deepen and the story wash over me once more.

All those gazes, like robins alighting on me and fluttering away, wary but interested. I know people always stare at one another on the tube. But these days it’s different.

The carriage rattles on shuddering around us.

Since the show started airing, four weeks ago, I’m lucky to get through any journey without some kind of interaction from strangers. A shy smile. A tap on the shoulder. A selfie. A handshake. A late-­night drunken gush. Or a hastily scrawled note. And sometimes even, quite confusingly, a scowl.

I don’t mean to sound ungrateful; I love my job. I genuinely can’t believe how lucky I am. But sometimes it feels like I’m at the wedding of a couple I don’t really know. My face aching from meeting so many well-­meaning and complicated strangers, while the whole time all I want to do is bob to the bathroom so I can get away and finally relax.

Although, of course, it’s not always safe. I learned that the hard way, a month ago, when the police showed up in my living room after countless calls and emails, finally taking notice when my agent stepped in.

He’d been waiting outside the theater, every night. Not particularly strange or concerning. Just an ordinary man.

I’d leave the stage door tired from work. I’d gone straight from filming on Eyre into A Doll’s House in the West End. At first he just wanted a signed program, and then a chat, and then longer chats that got harder to leave until finally he was following me to the tube station still talking. I had to start leaving with friends. I had to be chaperoned. One day he couldn’t stop crying, this stranger in his fifties. He just walked behind me and my friend, silent tears dripping down his slack face. His name was Shaun. I’d tried to sort it out with the police myself but it wasn’t until my agent received a package that they took it seriously. He was just a stalker. Not even a stalker really, just a lonely man trying to make friends. I told the police that, of course, but they insisted on following it up, issuing an official warning. I think his wife had died recently.

They wouldn’t tell me what was in the package he sent. I jokingly asked if it was a head, and they all laughed, so I guess it can’t have been a head. I felt guilty about what happened; the friendlier I had been, the worse it had gotten and the more I strengthened his perceived connection to me. I hope he’s doing better now. I wish they’d just told me what was in the package straightaway, though; instead I spent a week imagining the absolute worst. Weird photos. Skin. Teeth. Something his wife had owned. It was just a stuffed toy in the end and a slightly unsettling poem. But it’s hard not to think the worst when you’re trying not to think the worst.

I know not everyone is strange. But some people are.

At the next stop as I gather my things and disembark, a few eyes follow but when I surface at Green Park and the cold February air hits me, cooling my flaming cheeks, I chalk today’s trip up as a success. No incidents this time, no drunken football chants demanding I “Say it! Say it!”

Who knew Jane Eyre had a catchphrase?

And yes, in case you’re wondering—­much to my shame—­reader, I said it.

“You’re late,” my agent, Cynthia, smirks as I plonk down into the restaurant seat opposite her.

She’s already ordered us two glasses of champagne. I eye the chilled bubbles in front of me greedily. “Are we celebrating, again?” I half joke as I shrug off my coat, but her silence makes me raise my gaze.

“You could say that. Yes,” she says, grinning before pointedly sipping from her champagne flute. “I got a call this morning,” she purrs, placing her glass down calmly. “From Louise Northfield at BAFTA. A heads-­up if you will . . . Louise and I went to St. Andrews together; we tend to keep each other posted—­she loves you by the way. So the word on the street is . . . though they’re not announcing the nominees until a month before the ceremony, which is in May, but . . .” She pauses for effect. “You’re on the BAFTA list. Nominees. For Eyre. Best actress.”

For a moment her words don’t make sense to me. Then they slowly shuffle into meaning. I feel the blood drain from my face, then my hands, and in its place a rush of serotonin floods in, the like of which I have never felt before, crashing through me.

“Holy shit.” I hear the sounds come from me, distant, as I fumble with a shaky hand for my champagne and gulp down a cool, crisp mouthful. The light-­headedness only intensifies. Seven years I’ve worked for this. This is it. This is what I wanted. “Jesus Christ,” I mutter.

“That’s what I said.” Cynthia chuckles, grinning from ear to ear. “Now here’s the really good bit. All the other nominees are over fifty, and they’ve all won before.”

I sober quickly, brought up short. “Wait. Is that good?”

“Yeah, it is,” she says with a laugh. “People love discovering actors, even if they’ve been knocking around for years. Plus, you’ve got great credits, pedigree, even though this is your first major leading role. You’re academy catnip. A safe bet that seems like a wild card. And everyone will be rooting for you, nobody needs to see one of the ‘Ladies in Lavender’ win another bloody award.”

I let out a nervous laugh and take another swig of my drink. Seven years of auditioning has taught me never to get my hopes up but right now I can’t help it; my happiness bubbles up, irrepressible.

“Could we get a selection of everything? Just, whatever the chef thinks,” she says airily, as if that’s a thing that people actually say in restaurants. “Nothing too big, just a light lunch.” She looks to me questioningly. “Is that okay, hon?” The waiter’s gaze follows suit. Both deferring to BAFTA-nominated me.

“Okay, sure, yes, that sounds great,” I reply and the waiter heads off with total confidence in what I’d personally consider to be a very confusing order.

“This is all going to be new for you, and to a certain extent it’s new ground for me too. I mean, Charlie Redman won best actor in, what, 2015? But it’s different with men, they just show up in a suit. Best actress is trickier. I’ll be fielding calls about you as soon as the press release lands in April. So here’s my thinking. We’ve got two months to kill in the meantime. I don’t want you tied up filming, I need you free for bigger meetings with this on the horizon. We’re going to ride the crest of this. So how do you feel about a little work trip to LA so we can drum up some studio interest? Nom’s still unofficial but we can certainly drop some hints.”

She clocks my expression and changes tack.

“Sorry, I’m firing a lot at you, aren’t I? It’s a lot to take in. Here.” She raises her champagne flute and clinks mine. “One thing at a time. Congratulations, Mia, you clever, clever thing.”

Cynthia has been my agent, advocate, and therapist since I graduated. We’ve weathered some soaring highs and soul-­destroying lows together over the years. In some ways we’re unbelievably close and in others we’re almost strangers. It’s an odd relationship, but then it’s an odd industry.

Her energy suddenly changes. “Oh, and I heard about George by the way,” she says, her eyes searching mine, alive with curiosity. “That’s so exciting for him! He must be over the moon.”

I feel the smile slip from my face. I literally have no idea what she’s talking about. George? My George? 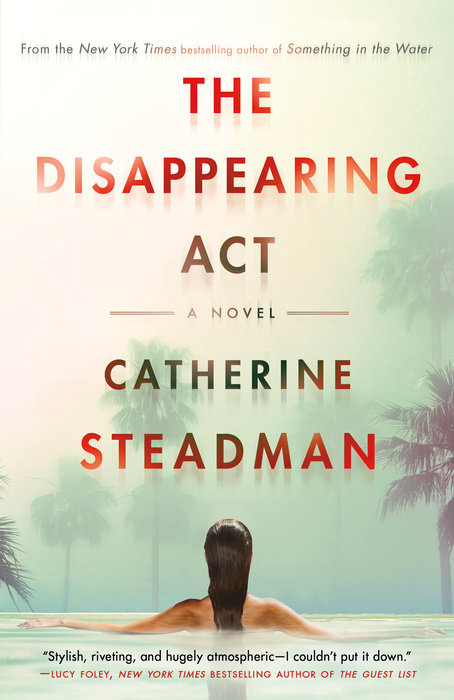