NEW YORK TIMES EDITORS’ CHOICE • “A powerful family and a deadly game. Be prepared for a nail-biting, roller-coaster of a ride in Catherine Steadman’s classy and ingenious new thriller.”—B. A. Paris, New York Times bestselling author of Behind Closed Doors

From the New York Times bestselling author of Something in the Water, Mr. Nobody, and The Disappearing Act. . . .

ONE OF THE BEST BOOKS OF THE YEAR: The New York Times

THE RULES
1. Listen carefully
2. Do your research
3. Trust no one
4. Run for your life

Harriet Reed, a novelist on the brink of literary stardom, is newly engaged to Edward Holbeck, the heir of an extremely powerful family. And even though Edward has long tried to severe ties with them, news of the couple’s marital bliss has the Holbecks inching back into their lives.

As Harriet is drawn into their lavish world, the family seems perfectly welcoming. So when Edward’s father, Robert, hands Harriet a tape of a book he’s been working on, she is desperate to listen.

But as she presses play, it’s clear that this isn’t just a novel. It’s a confession.

A confession to a grisly crime. A murder. And, suddenly, the game is in motion.

Feeling isolated and confused, Harriet must work out if this is part of a plan to test her loyalty. Or something far darker. What is it that Robert sees in her? Why give her the power to destroy everything?

An excerpt from The Family Game

Christmas lights twinkle in the rain as I duck down Fifth Avenue—reds, greens, and golds glimmering in reflection on puddles and glass as I dodge along the busy sidewalk, my phone pressed tight to my ear.

“And the good news is, it’s looking like we’re going to hit the million-copy sales mark by the end of this week! We did it, Harry!” my literary agent, Louisa, cheers on the phone. Her voice is as warm and close as if she were bundled up against the cold beside me in the sharp New York City chill. I try not to think of the three and a half thousand miles of distance between New York and London—between me and my old home and its soft, damp grayness—but every now and then the pangs of homesickness wake and stretch just beneath the surface of my new life. It’s been four months since I left England, and the pull of home is somehow stronger now that winter is setting in. New York can be cold in so many ways.

“For all intents and purposes,” she continues with glee, “here’s me saying you are now officially ‘a million-copy bestselling author.’ ” I can’t help but yelp with joy—a surreptitious half skip in the street. The news is incredible. My first novel, a runaway bestseller, has been on the charts since publication, but this new milestone isn’t something I could ever have dreamed of until now. New York swallows my ebullient energy greedily. I could probably lie down on the sidewalk and start screaming and the festive shoppers would just weave unfazed around me. It’s an oddly terrifying and yet reassuring thought.

“We’ll be getting another royalty payout from the publisher at the end of the quarter,” Louisa continues. “So Merry Christmas, everyone!”

It’s funny, it’s only November and yet it feels like Christmas is here already. I look up to the halos of light hanging above me, holiday decorations, sparkling from shop windows, strung in great swaths high over the main drag of Fifth. Everything seems to be moving so fast this year, a whirlwind, a whirlpool.

“How’s it going over there?” Louisa asks, snapping me back to reality. “Settled? Happy? Are you living love’s young dream?”

I let out a laugh of surprise because yes, as smug and as self-satisfied as it may sound, I really am. After so many years alone, after pushing relationships away, perhaps I’ve paid in full for my mistakes and I can put them to bed. Maybe I’m finally allowed a little happiness.

I shake off the dark thought and grasp back onto my new life with both hands. “Well, we’ve got furniture now at least. Not sure I’ve quite worked out the subway yet but I guess I’ll get there in the end. Or I guess I won’t,” I add jokingly.

The truth is, while I know I am beginning to get a feeling for New York City, I realize I am trying to settle into a city that does not settle itself. The crowds, noises, faces, people, that frenetic fight-or-flight energy. I suppose it’s only been four months—​I know it can take a lifetime to become part of a city, to find your place. And the world I’ve landed into here, with Edward, the new circles I find myself moving in, his rarefied life, that is something else again.

“And how is your dreamboat, how is Ed?” she asks, as if reading my thoughts. I slip past a gaggle of tourists in front of St. Patrick’s Cathedral, its bells tolling anachronistically alongside towering glass and steel.

Louisa was with me the night I met Edward; I shiver at the memory of the look she gave me when I first brought him over to meet her. That silent swell of pride I felt to have my arm hooked through his, the pride anglers must feel cradling their outsized shimmering catches. Though I can only credit chance and timing with my iridescent prize. In fact, it would probably be more accurate to say Edward plucked me from the stream than the other way around.

I would be lying if I said Edward’s background, his habits, his rituals—so alien to me—hadn’t lent him a strange additional attraction. His world is different from mine, everything he does invested with the subtle shimmer of something gilded. Not that I knew who he was when he first spoke to me.

We met at my publisher’s annual Summer Gala in London, a lavish, star-studded party packed with bestselling authors, high-flying editors, and super agents. That year it was being held at the Natural History Museum, the vaulting Victorian architecture festooned with bright bursts of tropical flowers: orchids and heady-scented lilies. Waiters in white tie, ferrying champagne high above the heads of the mingling household names, debut authors, and reviewers. It was my first big author event, my book having only just come out the week before and exploding directly onto the Top Ten. I’d bought a ridiculously expensive emerald dress in celebration and then spent half the night trying not to spill booze and canapés down it. Nervous, and completely out of my depth, I let Louisa usher me from important contact to important contact until I finally managed to escape the madness for the relative calm of the loos. I am no shrinking violet but too much noise, too many faces, triggers old wounds and sets my senses to a different frequency.

It was on the way back from the toilets, empty champagne glass in hand, that it happened. At first I thought it was nothing, just my heel snagging on something, causing a little stutter in my step. But the snag turned into a halt, a tug, and a hot blush rising as a glance back confirmed that my high heel was firmly wedged in one of the museum’s tiny, ornate floor vents. Victorian central heating.

I gave another tug and the heel seemed to loosen, but a few passing eyes found their way to me and I panicked. I tugged again, harder. And with a retrospectively impressive show of strength and an extremely loud metallic clatter I somehow managed to completely dislodge the 150-year-old wrought-iron grate from the stone floor, still attached to my Dior heel. The noise and spectacle now attracting the gaze of everyone in the vicinity.

With a deep desire not to prolong the experience but totally unsure what else to do, I hitched my dress and—drained white with shame—half lifted, half dragged the entire wrought-iron grate back toward its gaping floor hole. The grate clanked and banged as I tried to get it back in, all the time with my heel firmly attached. And that’s when he saved me, a firm hand on my back, that warm American accent, his voice low, reassuring, like home.

“Okay, okay. I see the problem.” His first words to me. And though, of course, he meant the problem with my shoe, and the grate—and that he could fix it—to this day I like to think he meant he saw the larger problem, with everything, with my past, with the holes in my life, and that he could fix those too. Listen, I’m no damsel in distress, trust me, I’ve survived a lot more than most, but you can’t underestimate the overwhelming power of someone swooping in to save you after a lifetime of having to save yourself.

Those eyes looking up at me, filled with such a disarming calm, with an inborn certainty that everything would all work out just great. The warmth of his skin against my bare shoulder blades. I did not have time to put up my usual barriers, to insulate myself or pull away from intimacy, because there I was, stuck.

He dropped down on one knee, like a proposal, like the prince in Cinderella, this impossibly handsome man, and as he gently wriggled my mangled shoe loose from the grate with my hands on his strong shoulders, I felt something inside me shift. A hope, long tamped down, flickered back to life in the darkness. And the rest is history.

Here I am a year-and-change later, having moved a continent and my entire life to be with him.

“Ed is doing great,” I answer, though we both know it’s an understatement. Ed’s start-up company turns over more money in a month than the literary agency Louisa works for does in a year. Edward is doing immeasurably well, but we’re British and we don’t talk about stuff like that. Besides, Louisa is well aware of who Edward is, the family he comes from. He’s a Holbeck and with a surname like that, even without family investment, success was almost inevitable. “I’m actually on my way to meet him now. He’s taking me skating.”

“Skating?” I hear the interest pique in her tone. She’s desperate to hear about him. About the Holbecks. Somehow I managed to bag one of America’s wealthiest bachelors without even trying and everyone wants to know how I did it, why I did it. But more important, they want to know: what are they like?

For that, of course, there is Google. And God knows I did a deep dive or ten in the weeks after meeting Edward. Generations of wealth, woven into the fabric of America since the Gilded Age, shipping, communications, and of course that ever-present shadow of questionable ethics. There is no end to the op-ed pieces on them, the gossip column space, the business section dealings with the Holbeck name, and yet the air of mystery they maintain around themselves means one can never quite be satisfied. They remain elusive, mercurial. That, with their presumably ruthless brand of magic, is a heady and alluring mix. 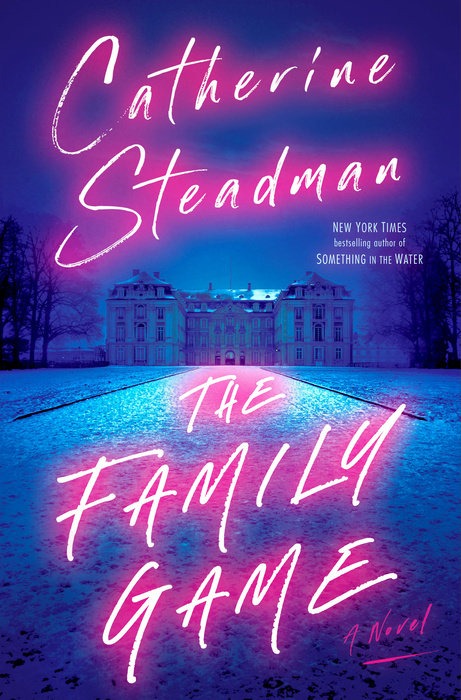