“Dilettante offers the best seat in the house into the workings of one of the great cultural institutions of our time.”—Buzz Bissinger, New York Times bestselling author of Friday Night Lights

Dana Brown was a twenty-one-year-old college dropout playing in punk bands and partying his way through downtown New York’s early-nineties milieu when he first encountered Graydon Carter, the legendary editor of Vanity Fair. After the two had a handful of brief interactions (mostly with Brown in the role of cater waiter at Carter’s famous cultural salons he hosted at his home), Carter saw what he believed to be Brown’s untapped potential, and on a whim, hired him as his assistant. Brown instantly became a trusted confidante and witness to all of the biggest parties, blowups, and takedowns. From inside the famed Vanity Fair Oscar parties to the emerging world of the tech elite, Brown’s job offered him access to some of the most exclusive gatherings and powerful people in the world, and the chance to learn in real time what exactly a magazine editor does—all while trying to stay sober enough from the required party scene attendance to get the job done. Against all odds, he rose up the ranks to eventually become the magazine’s deputy editor, spending a quarter century curating tastes at one of the most storied cultural shops ever assembled.

Dilettante reveals Brown’s most memorable moments from the halcyon days of the magazine business, explores his own journey as an unpedigreed outsider to established editor, and shares glimpses of some of the famous and infamous stories (and people) that tracked the magazine’s extraordinary run all keenly observed by Brown. He recounts tales from the trenches, including encounters with everyone from Anna Wintour, Lee Radziwill, and Condé Nast owner Si Newhouse, to Seth Rogen, Caitlyn Jenner, and acclaimed journalists Dominick Dunne and Christopher Hitchens.

Written with equal parts affection, cultural exploration, and nostalgia, Dilettante is a defining story within that most magical time and place in the culture of media. It is also a highly readable memoir that skillfully delivers a universal coming-of-age story about growing up and finding your place in the world.

An excerpt from Dilettante

We all have a moment or chance encounter that defines us, sets the narrative of our life in motion. Newton and that apple; John meeting Paul at St. Peter’s Church in Liverpool; Mick running into Keith on that Dartford train platform; Justin meeting Britney, I’m guessing in Orlando, both head to toe in denim of some era-specific wash. My origin story may not be as significant as those, but it was to me, and it began behind the bar of a restaurant in midtown Manhattan in April 1994.

At the time, I was toiling away behind that bar, living off tips, residing in that roach-infested dump with my older brother Nathaniel in the East Village. Only twenty-one, I had a spotty record in life already, the shadow of wild and unproductive teen years chasing me into early adulthood. I had no skills, no real passions or interests. I had a vague interest in being a rock star and was playing guitar in a few bands, but in reality I wasn’t a very good musician, and debilitating stage fright was a roadblock to that fantasy. Expectations for my future were low. The youngest of four, I was the one who wasn’t talked about, or if I was, the topic was quickly changed to something more pleasant. I wasn’t just the black sheep, I was a complete f***up.

I was quiet and shy when I was young, sensitive to a fault. A late-in-the-year birthday meant I was always small for my age, more a follower than a leader. I wasn’t a bad kid, never had any of that toxic masculinity that plagues so many boys. I was kind and friendly, but I lacked confidence, suffering from crushing insecurity and gutting self-doubt that only got worse as I moved into my teens. I began biting my fingernails obsessively, to the point that my fingertips were so swollen and disfigured that I always kept them hidden in my pockets or behind my back.

I was never good at much, especially school. And when you’re never good at anything as a child, you get frustrated, and eventually stop trying, and sometimes end up rebelling. Watching others succeed and find their passions just made me feel smaller, more insignificant, and sadder. How come I couldn’t have that?! Negative and nihilistic thoughts calcified. I retreated into the cavern of my own head, always thinking there was somewhere else I was meant to be, somewhere better, or just different from a suffocating suburb of New York City. A geographic cure.

Looking back, I didn’t quite know where or how I fit into the world, and it made me uncomfortable and detached. I had two imaginary friends when I was little. They were from another planet, or dimension, and lived behind my bedroom wall. I’d spend hours alone, talking to them in some made-up language. They might have been figments of my imagination, but they were mine, and they understood me. In a cruel twist, I could never get to them or actually see their faces behind that wall.

I barely made it out of high school.* And not having gone to college, I missed out on an important experience—more than the academics, the formative friendships that are cemented over those years. Those core relationships that last a lifetime for many and create a support network as you begin to develop and make that passage into adulthood.

I knew a lot of people and always had an active social life. In the spring of 1994, it was co-workers and other acquaintances from the neighborhood. I frequented downtown’s bars and clubs, staying out all night every night and managing to get into all kinds of trouble—I was a lot of fun, especially when there were drugs and drinking involved, and there always were. But I didn’t have many close friends. I had difficulty connecting with people, especially those around my age. I never felt good enough, and that ended up making me feel self-conscious and, worse, desperate for approval and acceptance. I was able to move on from friendships without sentiment, like an emotional transient, always looking for something or someone that would make me feel more comfortable.

Of course, this level of introspection and self-evaluation isn’t available to most twenty-one-year-old kids—it only comes with maturity and time*—but this is who I was back then, a bit of a car crash, working as a barback and occasional bartender at a restaurant called 44. For those who were in New York in the early to midnineties, especially those in media, the entertainment business, fashion, or the arts—and back then, those were the only people who mattered in New York—44 needs no explanation. It would be like describing clouds to a fighter pilot. It was a place so sublime, so awe inspiring, that it was hard to believe it had been built by human hands or conjured in the imagination of a human mind. And yet, like the pyramids, the Taj Mahal, or the Great Wall, it had been.

To those who have no idea what I’m talking about, 44 was, quite simply, a restaurant in a hotel lobby in midtown Manhattan. But calling 44 a restaurant is like calling the sun a star. It was so much more than that, and for a brief, shining period, roughly 1990 to 1995, 44 might have been the most important cultural institution in New York City. And while 44 still exists, in name and location, 44 no longer exists.

44 took its name from its address—44 West Forty-fourth Street. Between Fifth and Sixth Avenues, closer to Sixth, on the south side of the street, behind two giant, unmarked lacquered wood doors, the words Royalton Hotel etched in stone above them, visible if you craned your neck just right. You could walk right by it without knowing that on the other side of those doors was a flourishing civilization you didn’t know existed, a party you weren’t invited to. There was always a young man or two standing in front, about six feet tall, sample size, cheekbones for days, an expensive haircut, in a minimalist Mao-like dark blue uniform, the outfit as unmarked as the hotel’s doors—no name tags or hotel branding to defile the look. The bellmen worked for the Royalton Hotel, which was owned by Ian Schrager.

If Ian Schrager’s name sounds familiar, it’s because of his association with Studio 54, the most storied New York nightclub ever. That is, until December 14, 1978, when federal agents raided the West Fifty-fourth Street club. What they found were cooked books showing extensive profit skimming, garbage bags full of cash stashed behind the ceiling panels of the club’s office, and five ounces of cocaine (though in fairness you could have found five ounces of cocaine just about anywhere in New York in 1978). Ian Schrager and his partner, Steve Rubell, were arrested and, in 1980, pleaded guilty to tax evasion and sentenced to three and a half years in prison, spending a little over a year in jail, first in Manhattan, then in Alabama.

Once out of the clink, Schrager and Rubell turned their back on the nightclub business and got into the hotel business. This was at least partly out of necessity: They were ex-cons, so neither man could get a liquor license. Their Morgans Hotel was located on the east side of Madison Avenue between Thirty-seventh and Thirty-eighth, a block up from the Morgan Library. They imported some of that nightclub flair and high-design aesthetic to their new venture, dimming the lights, painting the walls in dark, muted tones, a fur throw pillow here, a faded leather club chair from the Paris flea markets there, Robert Mapplethorpe prints on the walls, Calvin Klein–designed uniforms on the hotel staff, who were all gorgeous. They also redefined the hotel restaurant and lobby as more than just a place to grab a quick meal or read a newspaper, but a proper scene. And that’s how the boutique hotel was born, and quickly copied.

But before they could open, there was the issue of the elusive liquor license. The solution they came up with was simple in retrospect: Let’s rent out the restaurant and lobby space to some restaurateur and let them get a liquor license and make the food and serve the drinks. After all, Schrager and Rubell were hoteliers now, and hotelier and restaurateur are two very different classes in the hospitality caste system. Who wants the headache of dealing with food and beverage, pouring drinks, slinging hash, sniffing fish—let’s bring in some schmuck, collect a monthly rent check, focus on the hotel, and make real money. And that’s exactly what they did.

In 1984, Morgans Hotel opened its doors for business to a collective gasp. It would turn out to be a trial balloon, and it floated up up up, so with proof of concept in their back pocket, Schrager and Rubell decided to expand and, like they’d done before with Studio 54, hunt bigger game in the heart of midtown Manhattan.

The two opened the Royalton Hotel on Forty-fourth Street and the Paramount Hotel across Times Square on Forty-sixth in quick succession, in 1988 and 1990, respectively.* While they were both red-hot out of the gate, it was the Royalton that really landed.

* Rubell died of AIDS-related complications in 1989 at forty-five and didn’t live to see the opening of the Paramount.

Dana Brown is the former deputy editor of Vanity Fair, where he was responsible for hundreds of feature stories on topics ranging from geopolitics to business, pop culture to crime, and high-society scandal to the art world, a number of which were recognized by the National Magazine Awards. He has also written and developed films and television pilots for Miramax, Hulu, AMC, Imagine Entertainment, and CBS. He lives in New York City. 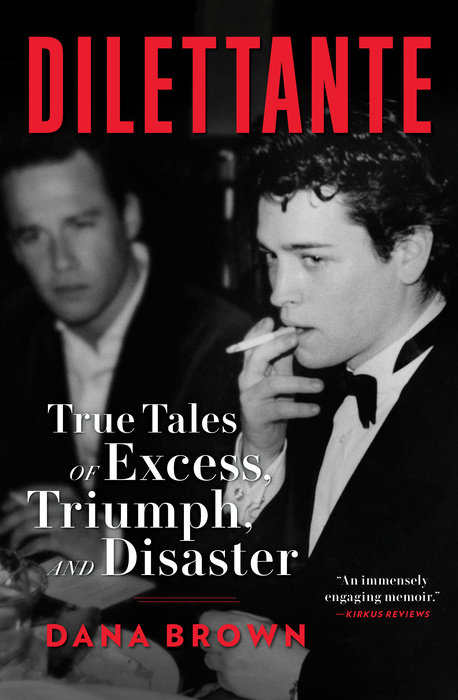