Anyone Else Falling Apart, Or Is It Just Me?

A smart, personal, darkly funny examination of what it’s like to be a woman at the crossroads of a midlife crisis, from the New York Times bestselling author of People I Want to Punch in the Throat

“I inhaled this book in one sitting; it’s a must-read for anyone over forty. This should become the gift all girlfriends give one another.”—Zibby Owens, host of the award-winning podcast Moms Don’t Have Time to Read Books

Jen Mann had what appeared to be the perfect life: a successful career as a bestselling author and award-winning blogger, a devoted husband, teenage kids who weren’t total jerks, and a badass minivan. So imagine her surprise when, at forty-seven years old, a midlife crisis kicked her straight in the ladybits.

Midlife Bites offers Jen’s trademark wit and honesty when it comes to important conversations and observations about women in midlife. Here, readers will be able to come together and find anecdotes and practical ideas to help navigate through this major point in their lives. For women who may feel isolated or overlooked, this collection of original essays offers valuable insights, takeaways, and, most important, a productive way forward. Jen shares her own story as well as advice and wisdom from the online community she built, tackling everything that bites about midlife, where nothing is off-limits: raging hormones; sex (after forty); finding your purpose; learning to make new friends (yes, even as a grown-up); moving out of your comfort zone; having conversations that count, no more small talk; and how to deal with rogue chin hairs (and other nuisances).

Jen Mann is leading the movement to create a new space where middle-aged women can share openly and honestly with one another. This no-BS collection of essays will help start the conversation and keep it going, because as women, we all have a right to be happy, fulfilled, and whole, no matter what stage of life.

An excerpt from Midlife Bites

How the Hell Did I Get Here?

I don’t know about you, but for me, midlife came out of nowhere and kicked me square in my lady garden.

To tell the truth, I thought I’d dodged that whole midlife slump I’d caught older women whispering about when they didn’t think I was listening. I was a late bloomer and really didn’t come into my own until my thirties, so by the time I landed on forty, I was actually feeling great. A few years before, I’d started a blog called “People I Want to Punch in the Throat,” which ultimately helped me develop my career as a writer, something I’d dreamed about since I was five years old. I was married to a man who adored me. My kids were pretty cool, and, most important, everyone was finally potty-trained. And most important of all, everyone was healthy. I lived in a nice home in a safe community where I tooled around in a sweet-ass minivan I’d bought myself with my own money. From the outside it looked like I had a great f***ing life.

But then one morning I woke up with a groan (because it seemed like once I hit forty-five I never woke up again without a groan) and took a long, painfully honest look in the mirror. Something I hadn’t done in quite some time. Every wrinkle, every gray hair, every soft and sagging body part came into sharp focus. I grimaced and finally noticed my bathroom counter was littered with miracle creams and serums, reading glasses, vitamins, and assorted prescription drugs for recently diagnosed ailments I thought only grandmothers suffered from.

I tried to focus on the positive: I’ve never been a stunner, so fading looks shouldn’t bother me too much, I reasoned. I’ve always been praised for my . . . ​my what? Oh, yeah, my quick wit. Only that was fading too. Shit. When did my brain turn into a bowl of lukewarm oatmeal? (I would later try to blame my foggy brain on the prescription cocktail I take for my old lady disease, but my doctor assured me my brain wasn’t in danger because the side effects would only destroy my liver. So, yay?)

I popped a handful of drugs plus my daily Aleve into my mouth and muttered, “When the hell did this happen?”

I looked at my phone, as if Google might have an answer for me. Instead, I saw my overstuffed calendar mocking me with a message in all caps announcing my forty-seventh birthday just a few days away.

Forty-seven already? It hit me that I was in the middle of my life (probably even past the middle if I wanted to get real depressing) and when I took stock of all the things I’d accomplished and accumulated over those forty-seven years, I felt incredibly underwhelmed. Half my life was over in a blink, and what did I have to show for it? Is this all there is?

For months, maybe even years, I’d been ignoring the slow, simmering buildup of my emotions, but that day it felt different. That day I couldn’t ignore them and I couldn’t stop them from boiling over. Before I could say “Shut it down!” I felt the floodgates open. All the thoughts and feelings I’d turned a blind eye to and had been pushing down deep daily, tumbled out all at once.

My brain might be foggy, but it can still be a real asshole. That day my brain was a total asshole.

It’s all downhill from here, Jen.

What the f*** are you doing with your life?

What have you accomplished?

How will you retire? Have you seen your bank account? I know you made money. Where the hell did it go?

Have you seen what your neighbor Elizabeth has done? She runs her own company plus she founded a charity this year. Oh, and let’s not forget, she still finds time for daily workouts to keep her body rocking, plus weekly date nights, and mind-blowing sex with her smoking-hot husband. When was the last time you had anything mind-blowing that wasn’t a dessert? Do you even remember how to do sex, Jen?

Furthermore, she’s a supermom who still reads to her kids every night before bed. Yeah, they’re fourteen and sixteen, but they want to spend time with her. When was the last time your kids wanted anything from you except money, Jen?

Is this it? Is this all you’re going to do? Wasn’t there supposed to be more? You had bigger plans than a minivan, a couple sassy kids, and a grumpy husband, didn’t you?

Why did you waste so much time? Was watching the entire series of Friends twice really worth it?

Why are you so unhappy?

Why are you so mad? Seriously. This amount of anger isn’t normal.

When did you start feeling this way?

Why is this happening?

You’re the only one who feels like this, Jen. You’re all alone. You’re obviously broken.

I was falling apart. Losing my mind. Going crazy. Whatever you want to call it. I was spiraling out of control and couldn’t stop. I was paralyzed by the fear of moving forward and the disappointment of what had already passed me by. I was consumed with the idea that I’d already failed and there was nothing I could do to make it better. What was the point? The “good” years were behind me and now I was “too old” to do anything amazing. Nope. All I could look forward to was old age and death.

And then, in case I wasn’t feeling bad enough, along came the shame for even feeling this way.

Are you kidding me right now with this shit? What is going on with you, Jen?

Did I miss something?

Are you living in a tent?

Are you running for your life?

Are you in an abusive relationship?

Are you chronically ill?

Is your child dying?

Let’s get real, it’s not like I ever thought I’d cure cancer or broker world peace, but I did think that by this point in my life I’d have done more. I thought I’d have more. More love. More passion. More life experience. More money in the bank. More success. More friends. More self-worth. More happiness. More everything.

I couldn’t even match my bra and underpants on a daily basis, how was I expected to have my entire life sorted?

And while some of it was my fault because I’d wasted the first thirty years of my life on bad perms, dating f***wits, working at dead-end jobs, and watching the entire series of Friends not twice, but three times, actually, I had to hand over some of the responsibility for my general malaise and lack of accomplishments to the universe. I’d tried doing things the right way, but no matter what I did, I found I could never get ahead, and I was drowning. Due to the shitty economy we’d survived and my equally shitty spending habits, we were nowhere near as financially sound as other forty-seven-year-olds. My marriage was relatively solid, but at that point the Hubs and I were more like business partners or roommates than lovers. The spark was dimming, if not completely extinguished. I felt like a failure in every aspect of my life. My teenage kids would be leaving home soon and I’d no longer have that buffer between me and him. How would we fill the silence in our house? What would we talk (and fight) about once the kids went to college? Oh, God, even worse, what if the kids never left home? I worried that I hadn’t prepared them to fly the nest. That I hadn’t raised contributing members of society. What if they took up permanent residence in my basement and refused to budge from the couch except for the occasional bathroom break or to get more snacks?

Where did all of this anxiety and self-doubt come from? I wondered. If anything, I’d been a cocky bitch for the previous ten years, and suddenly I couldn’t sleep at night because on top of financial woes, relationship problems, and impostor syndrome, I was worried about dumb shit too, like whether Delia from fifth grade was still mad at me for stealing her favorite pencil. And don’t even get me started on my lack of ambition. I mean, I barely wanted to get out of bed and take a shower, let alone go anywhere. If it required putting on pants or a bra, I wasn’t going. It wasn’t worth the effort to make myself presentable and to engage in mindless small talk with people I didn’t even like very much.

Anyone Else Falling Apart, Or Is It Just Me? 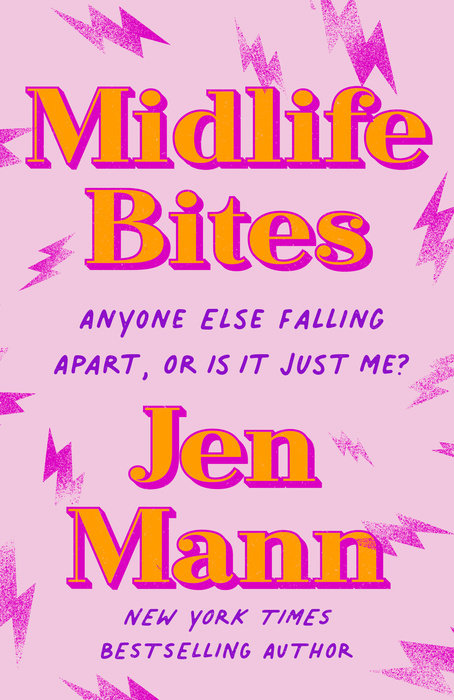