“The beautifully crafted poems in this collection are fiercely tender gifts.”—Roxane Gay, author of Bad Feminist

With her first full-length poetry collection, Warsan Shire introduces us to a young girl, who, in the absence of a nurturing guide, makes her own way toward womanhood. Drawing from her own life, as well as pop culture and news headlines, Shire finds vivid, unique details in the experiences of refugees and immigrants, mothers and daughters, Black women and teenage girls. In Shire’s hands, lives spring into fullness. This is noisy life, full of music and weeping and surahs and sirens and birds. This is fragrant life, full of blood and perfume and shisha smoke and jasmine and incense. This is polychrome life, full of henna and moonlight and lipstick and turmeric and kohl. The long-awaited collection from one of our most exciting contemporary poets, this book is a blessing, an incantatory celebration of resilience and survival. Each reader will come away changed.

A loop, a girl born
to each family,
prelude to suffering.

Bless the baby girl,
caul of dissatisfaction,
patron saint of not
good enough.

Are you there, God?
It’s me, Warsan.
Maladaptive daydreaming,
obsessive, dissociative.

Born to a lullaby
lamenting melanin,
newborn ears checked
for the first signs of color.

At first I was afraid, I was petrified.

The child reads surahs each night
to veil her from il
protecting body and home
from intruders.

She wakes with a fright,
someone cutting the rope,
something creeping
deep inside her.

Everything you did to me,
I remember.

Mama, I made it
out of your home
alive, raised by
the voices
in my head.

No one leaves home unless home is the mouth of a shark. You only run for the border when you see the whole city running as well. The boy you went to school with, who kissed you dizzy behind the old tin factory is holding a gun bigger than his body. You only leave home when home won’t let you stay.

No one would leave home unless home chased you. It’s not something you ever thought about doing, so when you did, you carried the anthem under your breath, waiting until the airport toilet to tear up the passport and swallow, each mournful mouthful making it clear you would not be going back.

No one puts their children in a boat, unless the water is safer than the land. No one would choose days and nights in the stomach of a truck, unless the miles traveled meant something more than journey.

No one would choose to crawl under fences, beaten until your shadow leaves, raped, forced off the boat because you are darker, drowned, sold, starved, shot at the border like a sick animal, pitied. No one would choose to make a refugee camp home for a year or two or ten, stripped and searched, finding prison everywhere. And if you were to survive, greeted on the other side—Go home Blacks, dirty refugees, sucking our country dry of milk, dark with their hands out, smell strange, savage, look what they’ve done to their own countries, what will they do to ours?

The insults are easier to swallow than finding your child’s body in the rubble.

I don’t know where I’m going. Where I came from is disappearing. I am unwelcome. My beauty is not beauty here. My body is burning with the shame of not belonging, my body is longing. I am the sin of memory and the absence of memory. I watch the news and my mouth becomes a sink full of blood. The lines, forms, people at the desks, calling cards, immigration officers, the looks on the street, the cold settling deep into my bones, the English classes at night, the distance I am from home. Alhamdulillah, all of this is better than the scent of a woman completely on fire, a truckload of men who look like my father—pulling out my teeth and nails. All these men between my legs, a gun, a promise, a lie, his name, his flag, his language, his manhood in my mouth.

Nin soo joog laga waayo, soo jiifso aa laga helaa,
A man who won’t listen to words, will listen to action.
I said Stop, I said No and he heard nothing.

Perhaps she has a plan, perhaps she takes him back to hers.
Perhaps he wakes up hours later in a bathtub full of ice,
dry mouth, flinching at his new, neat incision.

I point to my body and say Oh, this old thing? No, I just slipped it on.

Are you going to eat that? I say to my mother, pointing
to my father on the dining room table, mouth stuffed with a red apple.

The bigger my body is, the more locked rooms I find. The more men
queue at the door. Ahmed didn’t push it all the way in, I still think about what he could have          opened up inside of me. Ali hesitated at the door for three years. Johnny with the blue eyes            came with a bag of tools he’d used on other women: one hairpin, a bottle of bleach,
a switchblade and a jar of Vaseline. Yusuf called out God’s name
through the keyhole and no one answered.
Some begged, some climbed up the side of my body like moss
looking for a way in. Some said they were on their way and never came.

Show us on the doll where you were touched, they said.
I said I didn’t look like a doll, I looked more like a house.
They said Show us on the house.

My first found a trapdoor in my armpit, he fell in, hasn’t been seen since.
Once in a while I feel a quickening, something small crawling up.
I might let him out. Maybe he’s met the others—males
missing from cities or small towns and pleasant mothers,
who tricked and forced their way in.

Knock knock.
Who’s there?
No one.

At parties I point to my body and say
Oh, this old thing? This is where men come to die.

Warsan Shire is a Somali British writer and poet born in Nairobi and raised in London. She has written two chapbooks, Teaching My Mother How to Give Birth and Her Blue Body. She was awarded the inaugural Brunel International African Poetry Prize and served as the first Young Poet Laureate of London. She is the youngest member of the Royal Society of Literature and is included in the Penguin Modern Poets series. Shire wrote the poetry for the Peabody Award–winning visual album Lemonade and the Disney film Black Is King in collaboration with Beyoncé Knowles-Carter. She also wrote the short film Brave Girl Rising, highlighting the voices and faces of Somali girls in Africa’s largest refugee camp. Warsan Shire lives in Los Angeles with her husband and two children. Bless the Daughter Raised by a Voice in Her Head is her full-length debut poetry collection. 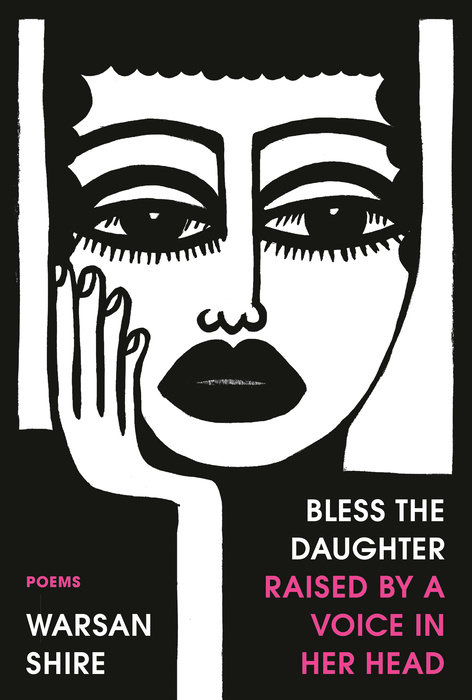