“An instant classic, it defines California cool and wears its sophistication lightly.”—Padma Lakshmi

When David Kinch isn’t working at one of his restaurants, he cooks in his strawberry-colored bungalow—affectionately known as the Pink Palace—where he lives on the Northern California coast. A casual meal might include a rustic pasta made with cans from the pantry, a simple roasted chicken, or too many oysters to count.

In At Home in the Kitchen, you’ll find David’s ready-for-anything Mother-Sauce Mayo, a revelatory Guacamole with Pomegranate, the best make-ahead Grilled Cheese, and everything you want to eat for dinner tonight: Onion & Brioche Soup, Brussels Sprouts with Cider & Goat Cheese, Penne with a Walnut Sauce, Jambalaya New Orleans Style, Oven-Roasted Potatoes with Cod, Whole Roast Cauliflower with Capers & Egg, and much more.

Photographed on location in the coastal town of Santa Cruz, where David surfs, sails, and entertains, this laid-back cookbook is packed with go-to recipes, songs to listen to while cooking, and a few classic cocktails (rhum punch, daiquiris, sangria, margaritas!) to set a cheerful mood. And while each recipe has no more than a few key ingredients, David’s clever techniques, subtle twists, and fresh flavor combinations guarantee delicious—and impressive!—results  in no time at all.

An excerpt from At Home in the Kitchen

The year I started at Manresa was slated to be my worst. I left my boyfriend, spent two days packing whatever could fit into my tiny car, and drove 10 hours south to move back in with my parents at the age of 26. I started at the three-Michelin-star restaurant the next day as a polisher, which is exactly what it sounds like. I was thrown into one of the most intense environments I had ever known with one task: to polish every piece of glass and silver used during service. Buffing glasses and dishes was thankfully my only job, as it was all I was qualified for. I broke two stems on my first night, which, in fine dining, is more than your allotment for the entire year. I’ll never forget when Chef Kinch (I’ll call him David from now on for the sake of brevity, though it still makes me uncomfortable) looked at me with my hair falling out of place, disheveled, and brimming with anxiety, and said, “Don’t be afraid to make mistakes.”

About a month after that first day, I was invited by one of the sous chefs to attend a Tuesday sailing trip with David and the kitchen crew near Santa Cruz, a surf town on the California coast. I brought a cooler full of beer, an inexplicable bag of mandarins purchased in a panic at the register, and not enough warm clothes. We spent hours on the Pacific Ocean, shoveling spicy snapper ceviche onto Juanita’s tortilla chips and washing down homemade pastrami on rye with deli mustard and half-sour pickles with Pacifico and lime. I felt the beginnings of a door opening, a glimpse into a world where the utmost pleasures in life come from sharing time, food, and drinks with the people you love.

As I moved up the ranks at Manresa, my memory is marked in epochs by occasions like these. Many nights were spent at David’s pink house down the street. A start-of-summer paella party. A wild, twelve-hour holiday dinner party—playing limbo with an old broom handle and dancing to Donna Summer’s “I Feel Love” until four in the morning. One of the best pastas of my life, thrown together with cans from the pantry after a staff bowling party. Roast chickens. Too many oysters to count.

David went from being an elusive chef to a dear friend over my years at Manresa, our friendship sparked by a shared love of chess, rhum, music, and, naturally, food and its unmatched power to bring people together. He has become a mentor and confidant. We have celebrated successes and supported each other through hardships.

When he approached me about writing this book together, I was both humbled and honored. I have been in the unique position to learn the delights of the dining table from a top-ten chef first-hand. But more than that, I’ve gotten to know the man behind the curtain. I’m proud to introduce you to him, so he might enrich your life in some of the ways he has enriched mine.

Heartbreak, a move, a career change: through these clichéd yet traumatic coming-of-age moments, I was extremely lucky. I had a place to stay. I had the opportunity to work at one of the world’s best restaurants. I had a once-in-a-lifetime chance to meet David Kinch, who has spent more than forty years in kitchens, has been named one of the best chefs in the world, and still spends his weekends making food for friends simply because it brings him joy.

David has dedicated his life to curiosity, continuous learning, tireless ambition, and having a damn good time in the process. In this book, you’ll have the opportunity to meet David, too. You’ll learn from him, cook with him, share a drink with him. He’ll show you the simple recipes he genuinely enjoys making on his days off. He’ll help you throw a spectacular party, or just throw something together when you’re hungry after a long night.

And, best of all, he’ll give you room to make mistakes.

DAVID KINCH'S singular style of American cooking has placed him on the world culinary map, and assured his legacy in the advancement of California cuisine in the 21st century. He has won the Best Chef in America award for the Pacific region from the James Beard Foundation. His restaurant Manresa has been awarded three Michelin stars. 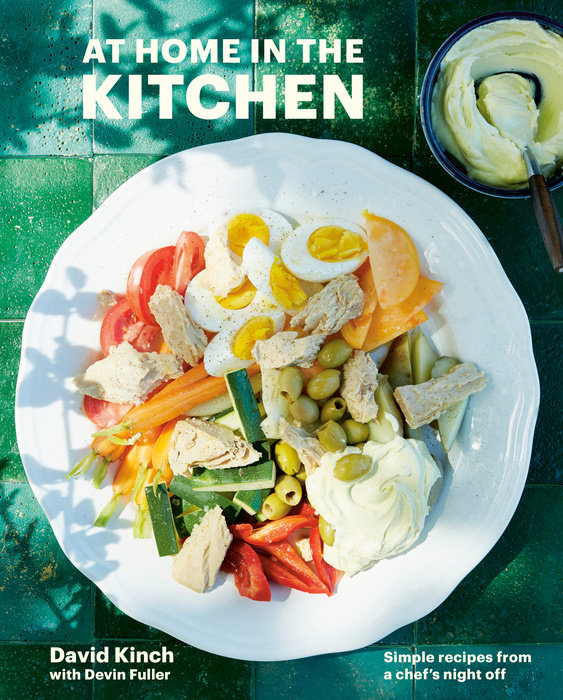