Inside the Mueller Investigation

NEW YORK TIMES BESTSELLER • In the first and only inside account of the Mueller investigation, one of the special counsel’s most trusted prosecutors breaks his silence on the team’s history-making search for the truth, their painstaking deliberations and costly mistakes, and Trump’s unprecedented efforts to stifle their report.

In May 2017, Robert Mueller was tapped to lead an inquiry into Russian interference in the 2016 presidential election, coordination by foreign agents with Donald Trump’s campaign, and obstruction of justice by the president. Mueller assembled a “dream team” of top prosecutors, and for the next twenty-two months, the investigation was a black box and the subject of endless anticipation and speculation—until April 2019, when the special counsel’s report was released.

In Where Law Ends, legendary prosecutor Andrew Weissmann—a key player in the Special Counsel’s Office—finally pulls back the curtain to reveal exactly what went on inside the investigation, including the heated debates, painful deliberations, and mistakes of the team—not to mention the external efforts by the president and Attorney General William Barr to manipulate the investigation to their political ends.

Weissmann puts the reader in the room as Mueller’s team made their most consequential decisions, such as whether to subpoena the president, whether to conduct a full financial investigation of Trump, and whether to explicitly recommend obstruction charges against him. Weissmann also details for the first time the debilitating effects that President Trump himself had on the investigation, through his dangling of pardons and his constant threats to shut down the inquiry and fire Mueller, which left the team racing against the clock and essentially fighting with one hand tied behind their backs.

In Where Law Ends, Weissmann conjures the camaraderie and esprit de corps of the investigative units led by the enigmatic Mueller, a distinguished public servant who is revealed here, in a way we have never seen him before, as a manager, a colleague, and a very human presence. Weissmann is as candid about the team’s mistakes as he is about its successes, and is committed to accurately documenting the historic investigation for future generations to assess and learn from. Ultimately, Where Law Ends is a story about a team of public servants, dedicated to the rule of law, tasked with investigating a president who did everything he could to stand in their way.

An excerpt from Where Law Ends

It was Sunday afternoon, March 24, 2019. I was passing through the Lincoln Tunnel in my old gray Subaru, heading toward the soulless thruways that stretch between New York City and Washington, D.C. On the passenger side floor was Innis, my English cocker spaniel, curled up and dozing. His breeder had promised me he was a great travel dog who would easily be lulled to sleep in a moving vehicle, a quality that had come in handy, given my peripatetic lifestyle over the years, ping-ponging between my home in New York and my job at the Department of Justice. The trips had grown increasingly rare, though, as I found myself working around the clock in Washington.

As numbing as this drive usually was, this particular trip was wistful. I had spent the past twenty-two months working as a prosecutor for Robert S. Mueller III, leading one of the three main teams in the Special Counsel’s Office charged with investigating Russian interference in the 2016 presidential election and coordination between the Russians and the presidential campaign of Donald J. Trump. Two days before, on Friday, March 22, we had finally delivered our report, all 448 pages of it, to the new attorney general, William Barr. We were feeling a note of finality to our collective mission. The Special Counsel’s Office had already largely dissolved. We’d said our goodbyes. I was driving back to Washington, one last time, to polish a couple of last “memos to file” and organize the documents in my office for the government archivists who would preserve our papers for posterity. At age sixty-one, after more than twenty years as a federal prosecutor, I would be returning to teach at NYU School of Law as a private citizen in my hometown.

After months of speculation, the press now had written confirmation from Barr himself that our report had been submitted and that he would soon be issuing a public statement about it. All weekend, the drumbeat in the media grew louder, as the press and many other Americans who felt invested in our work awaited the attorney general’s announcement. Internally, of course, we already knew what the report contained and had not breathed a word of it, true to our no-leak reputation.

The special counsel’s report was a devastating recitation of how Russian government operatives had infiltrated our electoral process, a conclusion that we all believed to be our most important long-term finding and one that required immediate and decisive action by our political leaders. As to whether any member of the Trump campaign, or anyone else, conspired with the Russians, our report was mixed. We had found insufficient evidence to criminally charge a conspiracy with the Russians beyond a reasonable doubt—the high standard of proof required for any criminal charge and conviction. But the frequency and seriousness of interactions we uncovered between the campaign and the Russians were nevertheless chilling, with Trump campaign officials both receptive to, and soliciting, Russian assistance throughout the summer and fall of 2016.

The final question our investigation pursued was whether the president had obstructed justice before or after our office was up and running. The facts here were no less appalling, although we had not indicted the president or, frustratingly, even taken the final leap of putting a label on what the facts added up to. Instead, our report set out numerous episodes that provided clear evidence against the president. However, we were forbidden from indicting him for these crimes, as we were employees of the Department of Justice and bound to follow an internal Department policy that no president could be indicted while in office—whether we agreed with that rule or not.

Given this idiosyncratic circumstance, Mueller had decided it would be unfair to say that we found the president had committed a crime, as Trump would not be able to challenge our conclusion in court, at least until he left office. Thus our report laid out the proof of his criminal conduct in detail, but did not give our legal assessment of it—we never said outright that he’d committed a crime. Instead, we had left it to Congress to make its own assessment of our evidence, or to another prosecutor in the future, who would be free to indict the president once he’d left office.

We were well aware that this approach would read awkwardly and, frankly, as a transparent attempt to hide our true thoughts. Anyone reading the report as a whole would see that when the evidence did not rise to such a level, we had explicitly said so, including when the conduct was that of the president. By contrast, our silence on whether Trump had obstructed justice—whether the president of the United States had broken the law—would be deafening. When he was not guilty of certain crimes, we said so; and when he was, we were silent. But we had found no other way of dealing with Mueller’s decision to abide by the principle of protecting anyone who could not have his or her day in court.

I spent most of the five-hour drive to Washington awaiting news of Barr’s announcement on the radio. I was listening on my iPhone, as the radio in my car had been on the fritz ever since a mechanic had jump-started my battery improperly around the time I’d joined the Special Counsel’s Office, and I’d never found a moment to get it fixed. For hours, there was only endless blather and speculation on air, filling the time. But, late that afternoon, as I drove along the New Jersey Turnpike, that changed: There was real news to report.

My ears perked up. The CNN announcers reported that they had their hands on a four-page letter from the attorney general, summarizing the conclusions of our report. This immediately struck me as odd. We knew that only diehards would read the entire report, which was written by lawyers and filled with dense legalese, so we had prepared summaries of our findings, highlighting key conclusions and evidence in both volumes of the report. When Barr announced he would be issuing something public shortly after receiving our report, I had assumed it would be these summaries. That would be the easiest way to get information to the public quickly, as Barr professed he wanted to do, and would not carry any risk of skewing one way or the other what the special counsel had determined. After all, the whole point of appointing a special counsel was to ensure an investigation of the president would be conducted independently, rather than led by the attorney general, a presidentially appointed cabinet member who might, therefore, be beholden to the subject of the probe. But from what I was now hearing, Barr had clearly not taken this approach, as our summaries were much longer than four pages.

Andrew Weissmann teaches criminal and national security law at New York University School of Law and is a partner at the law firm of Jenner & Block. Previously, he served as a lead prosecutor in Robert Mueller’s Special Counsel's Office and as chief of the Fraud Section in the Department of Justice. Weissmann served as the general counsel for the FBI under Director Mueller. He also directed the Enron Task Force, where he supervised prosecutions in connection with the company’s collapse. As a federal prosecutor for fifteen years in the Eastern District of New York, Weissmann prosecuted members of the Colombo, Gambino, and Genovese crime families, and police officers for misconduct arising from the Abner Louima attack. He holds degrees from Columbia Law School and Princeton University.

Inside the Mueller Investigation 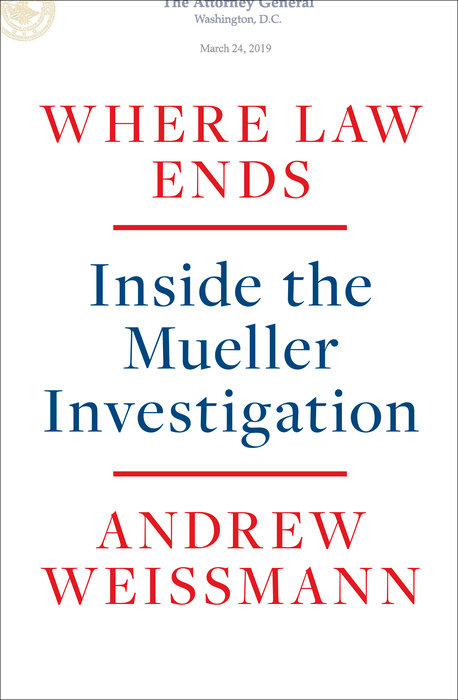