When an injured hockey legend with a PR problem and a former teen star craving an edgier public image start a fake relationship, neither expects a real challenge—ignoring their fiery chemistry—in this steamy friends-to-lovers romance.

Theo: They call me Thor. I’m the showman with mad skills on and off the ice until a nagging injury forces me to confront—long-term—the possibility that my career is coming to an early end. All endorsement deals hinge on my reputation, and my bad-boy persona isn’t cutting it. To keep my sponsorships, I need a major image overhaul. Enter Olivia DeLaurentis, the quintessential girl next door who’s hell-bent on shedding her good-girl charade, and what better way than to get together with a rule-breaking Avenger wannabe? So she and I strike an agreement—we pretend-date. The odds of anything real happening between us are slim, especially since we’re already friends and she’s also my best friend’s sister. One problem: She turns me on, and I learn real fast that Liv is playing by her own rules.

Olivia: I was a teenage America’s Sweetheart, but what I once thought was the opportunity of a lifetime has left me typecast as an innocent, naïve girl—and I’m sick of it. My brother’s best friend, bad-boy hockey star Theo Ture, needs some positive PR, so I offer a fake relationship. It’s not my first. The difference? This time I’m in complete control. What’s there to lose? Certainly not my heart since Theo’s already friend-zoned. Plus, the poster boy for an alpha male—bold, brash, tattooed—is not my type. At all. But there’s one problem: I didn’t expect the explosive chemistry between us, or the vulnerability behind his tough-guy façade. Or that he has a hidden secret I’m desperate to uncover. He’s not the only one with secrets, though—and as the lines of our fake relationship blur, I’m worried I’ll be the one exposed. . . .

An excerpt from Ice Storm

“You’ve got to be f***ing kidding me.” I stare at my screen, at a picture of my brother holding the cup, kissing the model he’s currently dating. Forget the model, I’m glued to the cup and the fact that my asshole brother is rubbing it in my face with a text that says It’s mine now. My younger brother, Hunter Ture, is a grade A bastard, and he becomes more ruthless with each NHL season that passes.

Raised in a hockey family in which our dad was a former goalie and NHL coach sculpted our relationship into a competitive one. My brother always felt the need to outdo me and becoming an adult didn’t force him to grow the hell up.

Instead, it brought out a petty streak miles long in him, despite the fact that I never wanted to compete with my little brother. Nope, my lack of engagement in his second favorite sport failed to deter him. His petty streak and his need to reign supreme in the Ture family continue to fuel more assholery.

Skating on my heels throughout college wasn’t enough. Instead, when I made it into the NHL, he followed suit. I won a cup, then a second. Now he’s finally won his first. I’d be happy for him if he wasn’t such a jackass.

Among our many differences: I’m not the type to gloat about my accomplishments, while he gloats all the damn time. Then there’s my love life, or lack thereof. Hockey is my life, and I’m not dating anyone. My brother knows this, so he dates a model or two and texts me photos while wearing his patented shit-eating grin. That same shit-eating grin I’m itching to smack off his smug face.

My cell vibrates again. What, no congratulations? Now he’s truly pissing me off. As a Nighthawk, when I won two cups, he never congratulated me—not once. Instead, he downplayed my accomplishments. But give my team a losing streak and look out! Our current slump has allowed Hunter to push my buttons by texting me, by reminding me that he’s younger, inherited our former-supermodel mother’s good looks, and is the luckiest son of a bitch alive because everything came easy for him, while it was the exact opposite for me. My splitting headache and the chronic pain splintering through my limbs is proof that I’ve put my body on the line to get where I am today while my brother reminds me who I am: a loser.

Stewing in a booth away from my teammates, I survey the action: it’s past midnight, and my remaining team-members-slash-friends are taking our loss much better than I am. Then again, they don’t blame themselves . . . they didn’t f*** up on the ice in our final playoff game of the season.

That one mistake cost us everything. Hell, it cost me everything, though no one knows the true extent of it yet. Even I’m not prepared to face my fate . . . not yet.

My Twitter notifications vibrate, jarring me out of my self-pity. My jaw tenses at the sight of my brother’s latest Tweet. Hunter has posted the picture of him, the cup, and the supermodel. That’s not all, though. Because my brother is the gift that keeps giving, aka: a pain in my ass, Hunter has tagged me and some of my teammates along with the Nighthawks organization.

San Diego Storm fans are already piling on and rubbing it in that Hunter’s the one with the cup. Storm fans love trash-talking, especially when it comes to the Nighthawks, and my feed is on fire.

“You little shit!” My tone is venomous. Brother or not, I really hate the motherf***er right now. More than usual, and that says a lot.

“Sounds like your brother is being an asshole again.” Olivia DeLaurentis raises her voice just “enough that I can hear her over Ryan McGee, also known as Lucky, who’s whooping like we’ve got something to celebrate. “How are you holding up, Theo?”

I sneer, handing her my cell as she plops down beside me. Having chosen a corner booth, I’m trying not to ruin my teammates’ surprisingly good moods. They seem to be ignoring the fact that we lost and the fact that my brother winning tonight has me in a foul mood. “I’m feeling like I f***ed up, which I did.”

“You had help losing, you know. The fact that the Nighthawks made it into the playoffs at all was damn impressive considering . . .” Liv stares at my iPhone. “God, Hunter really is a little shit. Taking it to Twitter is such a dick move.”

Her blunt response causes my lips to curl into a smirk. I can’t help it. That’s why she’s my friend, because she slices through all of the bullshit in record time.

“Oh! Don’t look now, but you’re smiling,” she teases in that sarcastic, smart-ass way only she can get away with.Shaking my head, I’m adamant. “Nope. It was a grin at best. Definitely not a smile.”

“Whatever you say.” She places my cell on the table, her tone one of disbelief. “What are they debating now?”

She tilts her head toward the other side of the room, where the single members of my team are fired up. A second line defenseman named Gunnar Valenti, who we call Blondie because of his light locks, Lucky, and the Vamp, real name Alexi Vladislov, are all smiling and laughing despite our recent losing streak.

I shrug. “The weather, their latest Netflix binge, their next prank—who the hell knows.”

They’ve still got a lot of life in them, a lot of hockey in them, I realize with a pang of envy. Their careers are still going strong with no nagging injuries. My present, my future, is another story. Short of this bar, what do I have to show for it? Worse yet, if I no longer have an NHL hockey career, who am I?”

“They have no families locally, and The End Zone has become their home away from home.” Liv nudges me with her arm. “It’s a good thing you own the place. You give them a spot where they can come together. Because you own it, they’ve claimed it as theirs.”

She’s right. The bar is mine now. Liv encouraged me and her brother, Damon—my best friend and teammate—to purchase the place as a safety net. When I had my doubts that I could run a business, there was Liv, telling me who she thinks I am and what she believes I’m capable of. Turns out I am pretty good at being a small business owner, after all. Did I tell her she was right? Hell, no.

Surveying the interior, I wonder aloud, “Is it enough?” I murmur it, barely loud enough for even me to hear. This place—The End Zone—has been a favorite with our team since the Nighthawks formed as an expansion team with a great deal to prove. A lot has happened here. Life-altering things, like two of my teammates meeting their wives, milestones reached, family celebrations, and us as a team celebrating wins, along with commiserating losses. Since our fight for the cup is over for the season, tonight falls into the latter category.

Damon and I have changed very little since taking ownership. The End Zone didn’t need a rehaul. No, it has charm and a rich history that we honored by keeping its mixture of polished vintage mahogany and upscale mood lighting with chrome accents, while pictures of NHL greats still hang on the walls. They are legends . . . the men I wanted to emulate. But, unlike me, none were sidelined by an injury so early in their careers.

My invincible persona is failing me. Or maybe I’m failing it. I’m no hero, nor am I invincible.

“Look at me.” Liv places her hand on my arm and jolts me from self-reflection, or self-flagellation, as it may be. “You’ve already won that cup—twice—and you did it with class. You didn’t need to bring anyone else down to celebrate your victories, and that means you’re more of a man than Hunter will ever be. You’re also a successful businessman, and a fan favorite. He’s the asshole, not you.”

“Yet he’s got the golden boy reputation, whereas I’m seen as a tattooed Chris Hemsworth wannabe.” I study my cell, noting that it’s gone into screen saver mode. “I was turned down for an endorsement today. It was with a national supermarket chain. Apparently, I’m not ‘family friendly.’ ”

Liv’s blue eyes meet mine. They are the hues of a stormy sea, combined with moss. Several shades of blue and green make them a killer combination. Add to that Liv’s jet-black hair that perfectly contrasts her million-dollar megawatt smile, long eyelashes, full lips, and, well . . . it’s no wonder she was once a popular actress.

What most people miss is that she’s as sweet as she is funny, and she’s also a great listener who somehow manages to say the right things.

“You don’t need a supermarket. You don’t want to represent a supermarket. Think about it, Theo. You’re hot. Tats are hot, and I bet you’d be hotter if you cut your hair. Go all Thor: Ragnarok.” She pauses, albeit briefly. “That was bad advice. On second thought, just be yourself. Go full on Theo Ture. You may not be the god of thunder, but you’re a two-time Stanley Cup champion. Own it.” 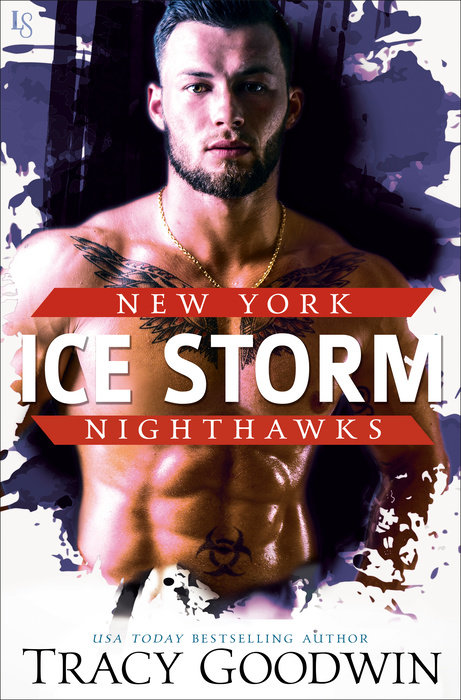