100 Recipes and a Real-Life Plan for Eating Less Meat: A Cookbook

You don’t need to be a vegetarian to eat like one! With over 100 recipes, the New York Times bestselling author of Dinner: A Love Story and her family adopt a “weekday vegetarian” mentality.

NAMED ONE OF THE BEST COOKBOOKS OF THE YEAR BY TIME OUT AND TASTE OF HOME • “Whether you’re vegetarian or not (or somewhere in-between), these recipes are fit to become instant favorites in your kitchen!” —Molly Yeh, Food Network host and cookbook author

Jenny Rosenstrach, creator of the beloved blog Dinner: A Love Story and Cup of Jo columnist, knew that she wanted to eat better for health reasons and for the planet but didn’t want to miss the meat that she loves. But why does it have to be all or nothing? She figured that she could eat vegetarian during the week and save meaty splurges for the weekend. The Weekday Vegetarians shows readers how Jenny got her family on board with a weekday plant-based mentality and lays out a plan for home cooks to follow, one filled with brilliant and bold meat-free meals.

Curious cooks will find more than 100 recipes (organized by meal type) for comforting, family-friendly foods like Pizza Salad with White Beans, Cauliflower Cutlets with Ranch Dressing, and Squash and Black Bean Tacos. Jenny also offers key flavor hits that will make any tray of roasted vegetables or bowl of garlicky beans irresistible—great things to make and throw on your next meal, such as spiced Crispy Chickpeas (who needs croutons?), Pizza Dough Croutons (you need croutons!), and a sweet chile sauce that makes everything look good and taste amazing. The Weekday Vegetarians is loaded with practical tips, techniques, and food for thought, and Jenny is your sage guide to getting more meat-free meals into your weekly rotation.

Who knows? Maybe like Jenny’s family, the more you practice being weekday vegetarians, the more you’ll crave this food on the weekends, too!

An excerpt from The Weekday Vegetarians

On a sunny morning a few Octobers ago, I was crossing Atlantic Avenue in Brooklyn on my way to work, when a thought landed in my head as if delivered by lightning bolt: We need to stop eating so much meat. The realization was so strong I felt the immediate need to text Andy, my husband, who was on his way to work, too.

Me: Should we become vegetarians?

I had no idea how he’d respond. Andy’s idea of a perfect dinner has always been an old family recipe for breaded, vinegary pork chops, followed closely by Marcella Hazan’s iconic Bolognese (the one where the ground chuck drinks up what must be a gallon of wine, milk, and tomato juice). In the summer, his happiest place is holding a gin and tonic while grilling a fleet of chicken thighs that have been steeping in an herby yogurt marinade all day. We both grew up in houses where dinner was defined as animal protein, starch, and vegetable, and even though we had half-heartedly been discussing cutting back on meat for years for our health and the planet’s health, the truth was neither of us could really picture how it would look in our family of four—the two of us and our two teenagers. We had our family dinner routine, we liked our family dinner routine, and our family dinner routine worked. The readers of Dinner: A Love Story, the website and cookbook series that I’d been writing for a decade, seemed to be on the same page as us, consistently Instagramming and sharing my recipes for Red Wine–Braised Short Ribs and Chicken Parm Meatballs and Roast Chicken, and visiting those pages way more frequently than, say, the baked Miso-Butter Tofu. Sure, there were more and more calls for vegetarian dinner ideas as the years went on, but if I am to believe my website’s metrics, meat was still king.

In other words, I expected Andy to reply to my text with something like “Let me know how it goes” or “Good luck getting everyone on board with that one,” but instead this is what he texted back:

Him: How would we do it?

Me: Maybe we try to cut back on meat during the week?

Him: And eat meat only on weekends?

Me: Yeah, and if we go to someone’s house or whatever and they’re serving meat, we obviously eat it.

Him: That sounds doable.

Him: Are we pescatarians or vegetarians?

Me: We’re not either yet.

Him: Where does fish fit into this?

Me: Let’s see how fast we run out of ideas.

Him: What do we tell the girls?

Me: Do we have to tell the girls?

The girls are our daughters, Abby and Phoebe, who were fourteen and sixteen at the time of this exchange. They have their no-fly zones when it comes to certain foods—most notably, eggs (I know!!)—but for the most part, they are adventurous eaters and not the types to question a meal’s legitimacy if it isn’t anchored by a piece of animal protein. We had several meatless meals in our regular rotation already: black bean burritos with pickled onions, butternut squash soup, cold sesame noodles, pasta with caramelized onions and spinach, quesadillas, salad pizza, regular pizza. But those were the exceptions to the rule, single meals that broke up the meat-centric rotation of other favorites like chicken potpie, Uncle Tony’s steak, barbecue chicken sandwiches, pork tacos. We wondered how they would do if the formula was reversed, if dinner as a rule was plant-based and the exception was chicken cutlets or pan-fried pork chops?

On the other hand, they are teenagers and, like most kids, are more game for things than we give them credit for. And though more often than not, the dinnertime conversation can dead-end with the usual flat-toned “fine” and “good” when they are asked about their days, there are nights when you realize they’re teaching you far more than you are teaching them. Like, for instance, that you can use the word fire as an adjective. Or that Camus’s philosophy can be distilled to one sentence: “Just because life is meaningless doesn’t mean you can’t give it meaning, and, Mom, there’s too much mustard in this dressing.” Or, this one, learned in earth science: “We could basically save the planet if we stopped eating beef.”

I did know that actually, and I’m not proud of what I’m about to say, but there is something that feels way more urgent about a statistic like that when it comes out of the mouths of my own children, the ones who will be inheriting the planet that I have been complicit in neglecting and, let’s be real, destroying. If there is something positive to spin from this, it’s that their generation understands the broader significance of their food choices and is optimistic about making changes in a way that many of their parents are not. They are simultaneously motivated and motivating.

There were other factors that had been pushing us in the plant-based direction for a while now, too. Beyond the environmental implications, there were the personal ones: It has become almost impossible to watch our aging parents and not think about how we can take better care of our own middle-aged bodies. Using the same weekends-only strategy, we had already dialed back on drinking a few years ago and, just like other walking cliché midlife-crisis sufferers, started going to gym classes with names like “Gladiators” and “Core & More.” Also helping things along was the fact that everywhere we look there seemed to be a big-name chef or cookbook author giving eggplant or Swiss chard or chickpeas the kind of star treatment once reserved for a pork shoulder or a leg of lamb. The “all-day café” trend happened in there somewhere, and lunches for work and with the family were suddenly happening over avocado toasts and smoothie bowls instead of burgers and turkey clubs.

But it’s one thing to know you want to eat in a more plant-based direction and an entirely different thing to know how to execute that pledge night after night at the dinner table, especially if you are not a big-name chef, if you are just someone who is short on time and ideas but wants to do right by family dinnertime.

To complicate things further, I’d spent fifteen years nailing down the exact kinds of dinners my family would not only eat but greet with bona fide high-fives (and chronicling all of it very publicly!). I had found my rhythm and my repertoire—the salmon salad! The steak salad! Dad’s cheeseburgers! Their Great-Great-Grandma Turano’s meatballs, for crying out loud! That’s two “greats” if you’re not paying attention, which brings me to another point: Not only were these easy recipes that I could make on autopilot, they were sentimental family recipes that I figured would forever be associated with warm, happy memories of sitting around their childhood dinner table. One night, about a year and a half into our family’s vegetarian pledge, over a plate of yogurt-y pasta and caramelized onions, my friend Joanna said to my daughters, “You’re so lucky you’re growing up in a house where the food is this good every night” (bless you, Joanna), before asking, “What would you say your parents’ best dishes are?”

I mean, if there was ever a question tailored to make me feel like the greatest parent ever, this was it. Instead, Phoebe kind of shrugged and Abby looked like she was struggling to come up with an answer.

I was incredulous. Part of me wanted to blame their responses on being teenagers—refusing to give their mother satisfaction in any way—but another side of me took a step back and thought about it. We had essentially overhauled our dinner table, and the expected answers to that question—pork ragu, turkey chili, sausage stromboli—the dinners that I pictured someday living on yellowed stained index cards in an antique recipe box labeled “Family Heirloom Recipes”—weren’t exactly making a lot of appearances on the dinner table. And though I had developed many new vegetarian recipes that garnered thumbs-ups from both kids, were they heirloom-worthy the way that our pork ragù, with its own Instagram hashtag, was heirloom-worthy? Were they heirloom-worthy the way our milk-braised pork loin, hand-painted on the inside of my kitchen cabinet and one of the first dinners I shared with Andy when we met, was heirloom-worthy?

Jenny Rosenstrach is the creator of Dinner: A Love Story, the award-winning website devoted to family dinner, and the New York Times bestselling author of Dinner: A Love Story (Ecco), Dinner: The Playbook (Ballantine), and How to Celebrate Everything (Ballantine). She was the features director at Cookie magazine for four years and special projects editor at Real Simple for six. Her essays and articles have appeared in numerous national publications and anthologies, including The New York Times Book Review, Real Simple, Martha Stewart Living, Whole Living, and the op-ed page of The New York Times. She has appeared on NPR’s Weekend Edition and NBC’s Today. She and her husband, Andy Ward, write the Providers column for Bon Appétit. They live with their two daughters in Westchester County, New York.

100 Recipes and a Real-Life Plan for Eating Less Meat: A Cookbook 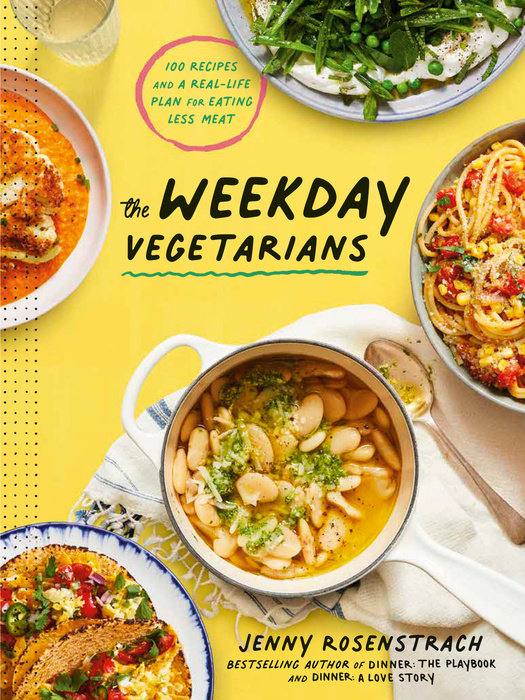