A woman hires a housekeeper to care for her aging parents—only to watch as she takes over their lives in this riveting novel from the New York Times bestselling author Samantha M. Bailey calls “an ingenious master of domestic suspense.”

In the end, I have only myself to blame. I’m the one who let her in.

Jodi Bishop knows success. She’s the breadwinner, a top-notch real estate agent. Her husband, Harrison . . . not so much. Once, he had big dreams. But now, he’s a middling writer who resents his wife’s success.

Jodi’s father, Vic, now in his late seventies and retired, is a very controlling man. His wife, Audrey, was herself no shrinking violet. But things changed when Audrey developed Parkinson’s ten years ago and Vic retired to devote himself to her care. But while still reasonably spry and rakishly handsome, Vic is worn down by his wife’s deteriorating condition.

Exhausted from trying to balance her career, her family, and her parents’ needs, Jodi starts interviewing housekeepers to help care for Audrey and Vic. She settles on Elyse Woodley, an energetic and attractive widow in her early sixties, who seems perfect for the job. While Vic is initially resistant, he soon warms to Elyse’s sunny personality and engaging ways.

And Jodi is pleased to have an ally, someone she can talk to and occasionally even confide in. Until . . .

She shuts Jodi out. And Audrey’s condition worsens—rapidly. Who is this woman suddenly wearing her mother’s jewelry? What is she after? And how far will she go to get it?

An excerpt from The Housekeeper

I’m the one who first brought up the idea, who championed it, who set the ball rolling, and who ultimately insisted on hiring her. My father was adamantly opposed to the idea, my mother ambivalent at best, my sister as indifferent as always. Only my husband, Harrison, thought it was a good idea, and only because he hoped it would take some of the strain off me.

“You do too much,” he was always saying. Followed by, “There are things you can control and things you can’t. You can’t be all things to all people. Concentrate on our family. Let the rest go.”
He was right, of course. Except it wasn’t that easy to just let the rest go. And try as I might, I couldn’t help hearing the unstated corollary: If only you’d put half the effort and energy into our house . . . our children . . . our marriage, as you do into your parents . . . your sister . . . your career . . .

Forget that it was precisely that career that not only covered our mortgage, but paid all the bills, thus allowing him the luxury of working full-­time, and without any noticeable remuneration, on his latest novel.

I say “latest,” although it’s been almost a decade since his first novel was published. To great acclaim, I might add. But still . . . If I sold only one house every ten years, I think I might be tempted to try my hand at something else.

To this, Harrison would undoubtedly point out that writing is more a calling than a career, rather like the priesthood, and nothing at all like selling real estate in an overheated, overpriced market. This would likely be followed by “It’s not easy to create anything of value with two young children underfoot.”

This last argument might hold more merit were it not for the fact that our son, Samuel, who is eight, is in school most of the day, and our daughter, Daphne, age three, is in daycare. True, Harrison is sometimes tasked with putting them to bed when I have an evening showing, or entertaining them when I have weekend appointments. Selling real estate isn’t exactly a nine-­to-five profession. Rather like writing, I’m tempted to say.

But, of course, I don’t, because it would likely lead to a confrontation. And I hate confrontations.
“The male ego is a fragile thing,” my mother once told me. And she would know. She was married to my father—­never the easiest of men—­for almost fifty years.

Not that my mother was any shrinking violet. She gave as good as she got, and their loud fights were legendary in their upscale neighborhood of Rosedale. Some of my earliest memories consist of lying in bed with my hands pressed tightly against my ears, in a vain effort to block out the angry accusations and furious denials flying up the stairs, threatening to burst through the door to the room I shared with my sister, who lay sleeping in the twin bed next to mine, as oblivious as always. Even now, when I can’t sleep, I hear their raised voices piercing the stillness of the night to shout in my ear.

If only the rest of what happened were so easy to explain.

Of course, my mother’s voice had all but disappeared in recent years, lost to the unrelenting ravages of Parkinson’s disease. In response, my father, having lost his favorite sparring partner, had little choice but to mellow accordingly.

Oh, he could still be difficult—­the male ego is a fragile thing after all—­but he could also be solicitous and even tender on occasion. Eight years ago, he resigned his position as head of the real estate company he founded—­yes, the same company for which I work—­to devote himself full-­time to my mother’s care.

A noble idea, to be sure.

But the man was in his late seventies, and while he remained healthy and enviably spry—­not to mention still rakishly ­handsome—­he was no longer a young man. And caring for a woman with advanced Parkinson’s is no easy chore at any age.

Which is why I suggested hiring a live-­in housekeeper.

An idea that was promptly, and soundly, rejected. (“We’re quite capable of managing on our own, thank you very much!” he bellowed.)

I tried enlisting my sister’s help. Tracy, four years my senior, had always been my parents’ favorite, a blond, blue-­eyed goddess, standing six feet tall and weighing all of one hundred and twenty-­five pounds. (For the record, my hair and eyes are matching shades of light brown, my height is a less impressive five feet, seven inches, and the last time I weighed a hundred and twenty-­five pounds, I was twenty-­one years old, some twenty years ago.)

For as long as I can remember, one of the first things out of my father’s mouth whenever I visited was always “Have you put on a little weight?” (Again, for the record, my weight is fine. In fact, I’m considered slim by all my friends.)

At any rate, Tracy declined to get involved, which could be another reason that she’d always been my parents’ favorite, despite the fact she rarely visited, and then only when she was short of cash.
So, the idea of hiring live-­in help was relegated to the proverbial back burner.

Until the day my mother fell out of bed and my father was unable to lift her back up on his own. He tried phoning me but I was at a showing and had my phone turned off; Harrison was too preoccupied staring at the blank screen of his computer to pick up, and Tracy hovered over her caller ID for maybe half a second before deciding not to answer and returning her cellphone to her pocket. The result was that my mother lay on the cold hardwood floor for the better part of two hours, my father reluctant to summon an ambulance—­“We’re quite capable of managing on our own! We don’t need strangers marching through our house, passing judgment on our belongings!”—­before I finally checked my messages and rushed over.

Which is when I put my foot down and insisted that my dad hire a housekeeper. They quite clearly could no longer “manage on their own.” And the cleaning lady they employed once a week—actually a succession of cleaning ladies, as no one was ever good enough to satisfy my dad for more than a few months—­would no longer suffice. They needed someone who lived in, I argued, someone to assist in my mother’s care, as well as cook and keep the house clean. Money wasn’t an issue. God knows they had more than enough. It was a matter of their well-­being.

Reluctantly, my father gave in, and allowed me to start interviewing candidates. He gave strict instructions: her references had to be impeccable, and while she had to be strong enough to assist in getting my mother in and out of bed, she also had to be slim and attractive. If he had to endure the presence of an outsider living in his house, he insisted, then the least she could be was pleasant to look at.

A young-­looking sixty-­two years old, tall, slender but with noticeably muscular upper arms, short blond hair, and an engaging smile that emphasized her equally engaging manner, she seemed almost too good to be true.

And what is it they say about things that seem too good to be true?

So maybe I should have been more suspicious. Or at least paid closer attention. Tracy claims the signs were there from the start, although she never voiced any such concerns at the time. She says that what happened had all the elements of a good mystery novel: the creaky old house, the aging invalid and the duplicitous housekeeper assigned to her care, the subtle clues, the red herrings, the dead body at the foot of the stairs.

But I’m getting ahead of myself. The dead body comes later.

And if there’s any mystery as to what transpired, it’s how I let it happen.

In the end, I have only myself to blame.

I’m the one who let her in.

Joy Fielding is the New York Times bestselling author of Someone Is Watching, Now You See Her, Still Life, Mad River Road, See Jane Run, and other acclaimed novels. She divides her time between Toronto and Palm Beach, Florida. 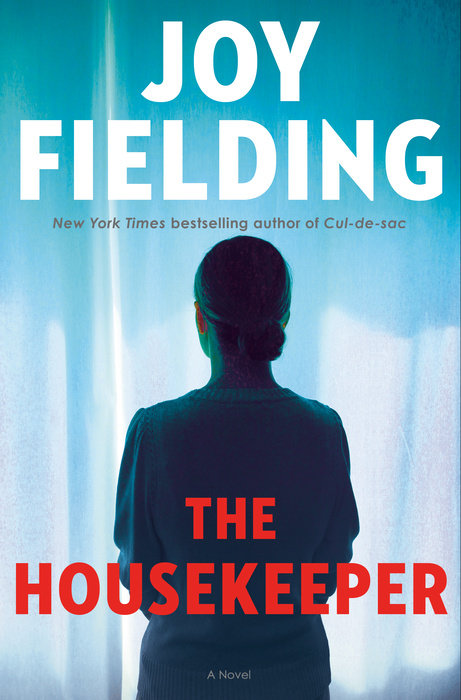