A Palestinian Girl's Fight for Freedom

A Palestinian activist jailed at sixteen after a confrontation with Israeli soldiers illuminates the daily struggles of life under occupation in this moving, deeply personal memoir.

“I cannot even begin to convey the clarity, the intensity, the power, the photographic storytelling of They Called Me a Lioness.”—Ibram X. Kendi, internationally bestselling author of How to Be an Antiracist

“What would you do if you grew up seeing your home repeatedly raided? Your parents arrested? Your mother shot? Your uncle killed? Try, for just a moment, to imagine that this was your life. How would you want the world to react?”

Ahed Tamimi is a world-renowned Palestinian activist, born and raised in the small West Bank village of Nabi Saleh, which became a center of the resistance to Israeli occupation when an illegal, Jewish-only settlement blocked off its community spring. Tamimi came of age participating in nonviolent demonstrations against this action and the occupation at large. Her global renown reached an apex in December 2017, when, at sixteen years old, she was filmed slapping an Israeli soldier who refused to leave her front yard. The video went viral, and Tamimi was arrested.

But this is not just a story of activism or imprisonment. It is the human-scale story of an occupation that has riveted the world and shaped global politics, from a girl who grew up in the middle of it . Tamimi’s father was born in 1967, the year that Israel began its occupation of the West Bank and he grew up immersed in the resistance movement. One of Tamimi’s earliest memories is visiting him in prison, poking her toddler fingers through the fence to touch his hand. She herself would spend her seventeenth birthday behind bars. Living through this greatest test and heightened attacks on her village, Tamimi felt her resolve only deepen, in tension with her attempts to live the normal life of a daughter, sibling, friend, and student.

An essential addition to an important conversation, They Called Me a Lioness shows us what is at stake in this struggle and offers a fresh vision for resistance. With their unflinching, riveting storytelling, Ahed Tamimi and Dena Takruri shine a light on the humanity not just in occupied Palestine but also in the unsung lives of people struggling for freedom around the world.

An excerpt from They Called Me a Lioness

I grew up in a tiny village in the West Bank called Nabi Saleh. It’s a twenty-five-minute drive northwest of Ramallah, the vibrant, booming city that’s a cultural and commercial hub for Palestinians. Nabi Saleh, by contrast, is small and simple. We have a school, a mosque, a little market, and a gas station. Most important, we have each other. The six hundred residents of my village are all related by blood or marriage, part of the extended Tamimi family. My classmates and friends were also my cousins. It’s a tight-knit community where everyone looks out for one another. And it’s been that way for hundreds of years.

At first glance, Nabi Saleh appears to be a peaceful place. It’s a quiet, idyllic village, home to endless hills dotted with olive trees between which wild horses and donkeys often roam. Unobstructed sunsets cast magical hues of red, purple, and gold in the sky. Children play outside freely, running from house to house, usually finding a welcoming adult to fill their bellies with a home-cooked meal.

But first impressions don’t tell the whole story. To get that, you’d have to look across the main road of our village, to the hill on the other side of the valley. There sits the Jewish-Israeli settlement of Halamish, a gated community with neatly arranged red-tile-roofed homes, manicured lawns, playgrounds, and a swimming pool. But Halamish wasn’t always there. It was illegally established on our village’s land in 1977. It’s one of hundreds of Israeli settlements built on Palestinian land in violation of international law. These settlements are essentially Jewish-Israeli colonies, and they continue to multiply at the expense of the indigenous Palestinian population. Over the years, we’ve watched the creeping expansion of Halamish, its settlers confiscating more of our land and resources with the full approval of the state of Israel. Not just approval, but facilitation, too. Israel installed a military base right next to the settlement, to protect its residents and to make our lives in the village a living hell.

But Nabi Saleh is just a microcosm of Palestine. For the past century, the Palestinian people have been fighting Zionist efforts to take more and more of our land. Zionism is a nationalist movement that began among some European Jews in the late nineteenth century. Its founders believed that the answer to mounting anti-Semitism in Europe was for Jews to settle in Palestine, which was still a territory of the Ottoman Empire at the time, populated by Arabs who were majority Muslim, with Christian and Jewish minorities, too. Only a handful of Jews took up the call then, but during World War I, the Zionist movement secured significant help from the British Empire. In 1917, the British issued the Balfour Declaration, which pledged to establish “a national home for the Jewish people” in Palestine. By the time World War I was over, the British had taken control of Palestine from the Ottomans. Under their colonial rule in the years that followed, a period known as the British Mandate, they made good on their 1917 promise by facilitating the immigration of thousands more European Jews to Palestine. In doing so, the British gave away land that wasn’t theirs, with no regard for the indigenous-majority population living there: the Palestinians.

They’d eventually come to pay a price for the mess they created. From 1936 to 1939, Palestinians waged a massive nationwide uprising against the British and their pro-Zionist policies. It was called the Arab Revolt, and while the British managed to violently suppress it, their troubles didn’t end there. Beginning in 1944, several armed Zionist groups comprised of European Jewish settlers launched violent attacks against the British, who by then were trying to limit Jewish immigration to Palestine. The Zionists wanted the British gone and made it increasingly dangerous and costly for them to stay. By 1947, the British decided they had had enough and handed over the problem of Palestine to the United Nations.

Meanwhile, the Holocaust, during which up to six million Jews were savagely murdered by Nazi forces in World War II, devastated European Jewry but also changed Palestine forever. The Holocaust resulted in hundreds of thousands of survivors, traumatized and imperiled, fleeing Europe—tens of thousands of them to Palestine. Ashamed by their failure to protect Europe’s Jews from Hitler’s camps and ever reluctant, for domestic political reasons, to allow large-scale immigration of the survivors, much of the international community recognized the Zionist demand for a state of their own in Palestine. In 1947, the United Nations approved a plan to partition Palestine into a Jewish and a Palestinian Arab state, with Jerusalem remaining under international control.

Israel declared its statehood on May 14, 1948, but not on empty, uninhabited land. The state was established on the land of my grandparents: historic Palestine. European Jews created a state on territory where the majority of residents were the indigenous Palestinian population. And in order to achieve this state in which they would be the majority, the Zionists had to violently evict the Palestinian majority. Even today, many Zionist thinkers freely admit that without the ethnic cleansing of 1948, they would not have had their Jewish state.

Palestinians painfully commemorate the events of 1948 as Al-Nakba, or “the Catastrophe.” That’s because, upon declaring its statehood, Israel unleashed its militias to force 750,000 Palestinians to flee their homes and destroyed more than 400 Palestinian villages. Some Palestinians managed to stay, retaining their land and houses inside what would become modern-day Israel. Meanwhile, the Arab countries that went to war with Israel in 1948 couldn’t defeat the newly established Zionist state, which had secured millions of dollars in aid from donors in the United States. Jordan managed to capture East Jerusalem and the West Bank (where Nabi Saleh is located), and Egypt took control of Gaza. But in the end, Israel had seized way more of Palestine than the United Nations’ partition plan ever gave it.

Israel’s campaign to ethnically cleanse the land of its native Palestinian population didn’t stop in 1948. It has never stopped. Today, generations of Palestinian refugees, more than seven million of them and their decendants, live across the globe. It’s the longest unresolved refugee crisis in the world. Some Palestinians still hold on to the old iron keys of the houses from which they were expelled, in the hope of finally being granted the right of return—a right that is supported by international law but vehemently denied by the state of Israel.

Israel captured even more Palestinian land in the 1967 Arab-Israeli War. After swiftly defeating neighboring Arab armies in a matter of days, Israel seized Gaza, the West Bank, and East Jerusalem and began a military occupation of these Palestinian territories that, to this day, has no end in sight.

Growing up under a foreign military occupation means living under the constant threat of state-sanctioned violence. It also means living with the total absence of freedom, which is the case for more than five million Palestinians in the occupied territories today. We’re not citizens of Israel; nor do we have a say or any political rights in the state that controls every aspect of our lives. We’re stuck with the inability to plan for our futures, to travel freely, or even to move about our territories from city to city without having to cross military checkpoints. We need permission to build our homes, to travel, to work—all the basic rights and freedoms you might take for granted living in civil society simply don’t exist when you’re living under military occupation. It’s not an easy life, and yet, it’s the only one I’ve ever known.

Israel justifies controlling us and denying us our rights by claiming it’s about security. It has succeeded in convincing its own people and its supporters around the world that it needs to do so out of fear of existential elimination. But the facts tell a different story. Israel is a nuclear-armed country. It has had peace treaties in place with its neighboring Arab countries Egypt and Jordan since 1979 and 1994, respectively, and has normalized relations with a host of other Arab countries in recent years. Despite this, Israel continues its land confiscation, erasure of Palestinian life, and domination over us.

A Palestinian Girl's Fight for Freedom 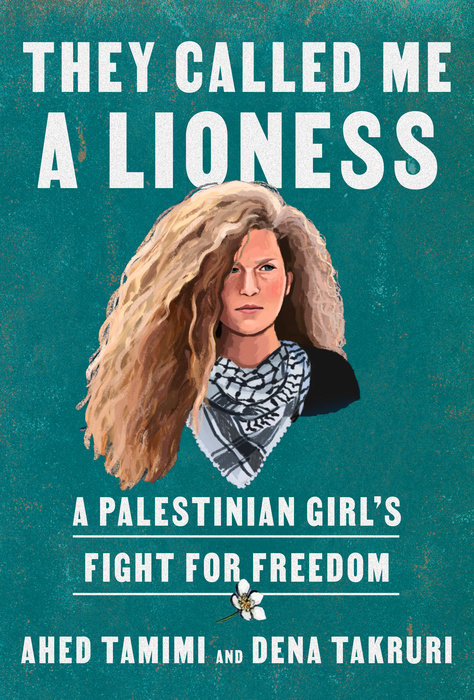