NAMED ONE OF THE BEST BOOKS OF THE YEAR BY KIRKUS REVIEWS • “This biography-through-letters gives an intimate and warm voice to the imagination behind the treasury of uncanny tales that is Shirley Jackson’s legacy.”—Joyce Carol Oates

Shirley Jackson is one of the most important American authors of the last hundred years and among our greatest chroniclers of the female experience. This extraordinary compilation of personal correspondence has all the hallmarks of Jackson’s beloved fiction: flashes of the uncanny in the domestic, sparks of horror in the quotidian, and the veins of humor that run through good times and bad.

i am having a fine time doing a novel with my left hand and a long story—with as many levels as grand central station—with my right hand, stirring chocolate pudding with a spoon held in my teeth, and tuning the television with both feet.

Written over the course of nearly three decades, from Jackson’s college years to six days before her early death at the age of forty-eight, these letters become the autobiography Shirley Jackson never wrote. As well as being a bestselling author, Jackson spent much of her adult life as a mother of four in Vermont, and the landscape here is often the everyday: raucous holidays and trips to the dentist, overdue taxes and frayed lines of Christmas lights, new dogs and new babies. But in recounting these events to family, friends, and colleagues, she turns them into remarkable stories: entertaining, revealing, and wise. At the same time, many of these letters provide fresh insight into the genesis and progress of Jackson’s writing over nearly three decades.

The novel is getting sadder. It’s always such a strange feeling—I know something’s going to happen, and those poor people in the book don’t; they just go blithely on their ways.

Compiled and edited by her elder son, Laurence Jackson Hyman, in consultation with Jackson scholar Bernice M. Murphy and featuring Jackson’s own witty line drawings, this intimate collection holds the beguiling prism of Shirley Jackson—writer and reader, mother and daughter, neighbor and wife—up to the light.

An excerpt from The Letters of Shirley Jackson

I must stop writing letters and get to writing a novel. If you think of any good scenes for a novel covering about forty pages send them right along. I can use anything I get.

Shirley Jackson was born in San Francisco, California, on December 14, 1916. Her father, Leslie, had immigrated from England at age twelve with his mother and two sisters and was a self-made successful business executive with the largest lithography company in the city. Her mother, Geraldine, was a proud descendant of a long line of famous San Francisco architects and could trace her ancestry back to before the Revolutionary War.

Shirley primarily grew up in Burlingame, an upper-middle-class suburb south of the city. But when she was sixteen, Leslie was promoted and transferred, and the family moved—luxuriously, by ship, through the Panama Canal—to Rochester, in upstate New York. The Jacksons quickly joined the Rochester Country Club and became well-established in the city’s active societyworld. The move was very hard on Shirley, who missed California and her friends there, especially her best friend, Dorothy Ayling. She finished high school in Rochester (where one of her classes was once interrupted for a few minutes so that Shirley could marvel at snow falling outside the window), then attended Rochester University for one difficult year, before deciding to spend the next year writing alone in her room at home, with the lofty goal of producing a thousand words a day. Little of what Shirley wrote during that period is believed to have survived.

She then enrolled at Syracuse University, where she enjoyed literature classes, and where the university’s journal, Threshold, published her story, “Janice,” a one-page conversation with a young woman who brags that she has that day attempted suicide. Another literature student, Stanley Edgar Hyman, from Brooklyn, New York, the brash, intellectual son of a Jewish second-generation wholesale paper merchant, read her story and vowed on the spot to find and marry its author.

Shirley and Stanley met on March 3, 1938, in the library listening room, and an intellectual connection quickly developed into a romantic one. These letters begin just three months after they met, when both Shirley and Stanley are on summer break, she at home in Rochester, and he at first at home in Brooklyn and then rooming with his friend Walter Bernstein at Dartmouth, then working at a paper mill in Erving, Massachussetts.

This is the earliest known surviving letter of Shirley’s. She is twenty-one, and he is about to turn nineteen.

portrait of the artist at work. seems i brought a collection of miscellaneous belongings home from school, among them a c and c hat which bewilders gaddamnthatword my little brother. he says if its a hat why doesn’t it have signatures all over it. mother seems to think i’m insane, and closes her eyes in a pained fashion when i call her chum. she also tells me that love or no love i have to eat and when i say eatschmeat she says what did you say and for a minute icy winds are blowing. there has been hell breaking loose ever since mother woke me this morning by telling me that that was a letter from dartmouth that the dog was eating.when she came in an hour later and found me reading the letter for the fifth time she began to be curious and asked me all sorts of questions about you. yes, she got it all. consequently there was a rather nice scene, me coming off decidedly the worse, since mother quite unfairly enlisted alta’s assistance and alta went and made a cake and i like cake. mother says, in effect: go on and be a damn fool but don’t tell your father. i had to cry rather loudly though. which means that you are going to meet a good deal more opposition than i had counted on. i think mother was mad because she took your long distance call the other day and the big shot was expecting an important business call and he was quite excited when the operator told him that the party at the other end of the line wasn’t going to pay. yes, and mother says to tell you that any more letters arriving with postage due and she will either steam the letters open since they belong to her since she practically bought them or she will start taking the postage out of my allowance.

however all in all she is being rather sweet, and more intelligent than i gave her credit for, since she absolutely refuses to forbid me to see you which means that now i have no reason to be romantically clandestine. disappointing when i’d already picked out a hollow oak tree. which brings me to the point: if you love me so damn much why don’t you come out and say so? looked all through your letter to find out if you loved me and you refuse to say. damn you anyway. i love you you dope.

notice if you haven’t already that i have borrowed your distinctive writing style with ideas of my own such as no punctuation which is a good idea since semi-colons annoy me anyway. and incidentally i read mother the poem at the top of the pages in your letter and she translated it for me, she knows french and i don’t but even then it wasn’t such a good idea. i also told father all about communism which was wrong, wasn’t it. he said re-ally in a whatthehelldoyouknowaboutlifeyoushelteredvictorianflower sort of voice.

also. y snarls deep down in her throat whenever i mention you which idoratheroftenchum. she thinks you’re a nice sweet child, only it’s too bad you had to fall into my clutches. i managed to get to talking before she did so now she knows all my troubles and i don’t know any of hers. ‘tanley . . . ​i think i’ll come to new york and get laid. oooooooooh yes. my mother mayhertribeincrease had been reading liberty that oracle of the masses and has discovered that eight out of ten college students are all for immorality. she has been asking me leading questions until i came out and said that if she meant had i preserved the fresh bloom of dewy innocence yes i had but it hurt me a damn sight more than it ever hurt liberty. mother is reassured but not too happy about the whole thing, having doubts.

about our mutual friend Michael. he brought the scamp . . . ​boat . . . ​in fifth in saturday’s race and mother saw him that night and he was plenty drunk and getting drunker and the damnfool insulted mother in some way and now she’s mad and michael can’t come see me till mother is appeased and he’ll never remember that he said anything wrong till someone meaning me reminds him. are you happier than formerly?

s.edgar. it’s so silly to write this junk when all i want to say is i can’t stand it i won’t wait four months i love you. what am i going to do? it’s not going to be long, is it? it’ll be september soon, won’t it? like hell it will.

shan’t go on like that. i’m going to Be Brave. bloody, but unbowed. going to be a debutante. yeah. i’m going to count the days and minutes till september. think of me sometimes, won’t you, chum. hell. wish i could think of a good quotation to top that paragraph off with.

i shall go on writing revolutionary poetry as long as i damn well please. i just thought of a good line: capitalists unite you have a world to win and nothing to lose but your chains . . . ​

dearest, be a good boy, and do wear your rubbers, for mother’s sake, now won’t you?

p.s. s. edgar; goddamn your lying soul why did you have to go away and leave me? I love you so much.

every time i get a letter from you, which seems to be an event happening with astonishing frequency, i think of more things i want to say to you, most of them being i love you but that’s beside the point. so it has come to the position where i write you every day because you write me every day and i hope you like the idea. anyway i like to write letters in your style because i don’t have to hunt for the shiftkey and because it’s easier on ernest, who is typewriter, and makes him very happy because he is lazy too.

i know that should be whom

Shirley Jackson was born in San Francisco in 1916. She first received wide critical acclaim for her short story “The Lottery,” which was published in The New Yorker in 1948. She is the author of six novels, including The Haunting of Hill House, We Have Always Lived in the Castle, and The Sundial; two bestselling family chronicles, Life Among the Savages and Raising Demons; and hundreds of short stories, many published in five separate posthumous collections. She died in 1965 at the age of forty-eight. 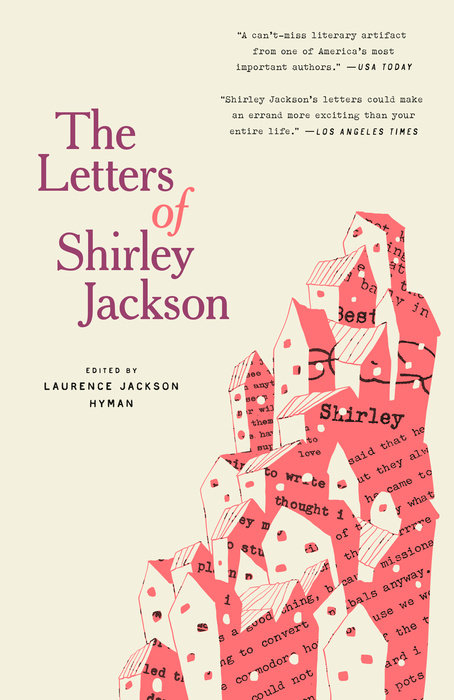