Digging graves had not been part of my plans when I woke up that morning.

Reacher goes where he wants, when he wants. That morning he was heading west, walking under the merciless desert sun—until he comes upon a curious scene. A Jeep has crashed into the only tree for miles around. A woman is slumped over the wheel.

Dead? No, nothing is what it seems.

The woman is Michaela Fenton, an army veteran turned FBI agent trying to find her twin brother, who might be mixed up with some dangerous people. Most of them would rather die than betray their terrifying leader, who has burrowed his influence deep into the nearby border town, a backwater that has seen better days. The mysterious Dendoncker rules from the shadows, out of sight and under the radar, keeping his dealings in the dark.

He would know the fate of Fenton’s brother.

Reacher is good at finding people who don’t want to be found, so he offers to help, despite feeling that Fenton is keeping secrets of her own. But a life hangs in the balance. Maybe more than one. But to bring Dendoncker down will be the riskiest job of Reacher's life. Failure is not an option, because in this kind of game, the loser is always better off dead.

An excerpt from Better Off Dead

The stranger got into position under the streetlight at 11:00 p.m., as agreed.

The light had been easy to find, just like he’d been told it would be. It was the only one in the compound that was still working, all the way at the far end, six feet shy of the jagged metal fence that separated the United States from Mexico.

He was alone. And unarmed.

The car showed up at 11:02. It kept to the center of the space between the parallel rows of lockup garages. They were made of metal, too. Roofs warped by the sun. Walls scoured by the sand. Five on the right. Four on the left. And the remains of one more lying torn and corroded ten feet to the side, like something had exploded inside it years ago.

The car’s lights were on bright, making it hard to recognize the make and model. And impossible to see inside. It continued until it was fifteen feet away then braked to a stop, rocking on its worn springs and settling into a low cloud of sandy dust. Then its front doors opened. Both of them. And two men climbed out.

Both the car’s back doors opened. Two more men climbed out.

Definitely not as agreed.

The four men paused and sized the stranger up. They’d been told to expect someone big and this guy sure fit the bill. He was six feet five. Two hundred and fifty pounds. Chest like a gun safe and hands like backhoe buckets. And scruffy. His hair was coarse and unkempt. He hadn’t shaved for days. His clothes looked cheap and ill-­fitting, except for his shoes. Somewhere between a hobo and a Neanderthal. Not someone who was going to be missed.

The driver stepped forward. He was a couple of inches shorter than the stranger, and a good fifty pounds lighter. He was wearing black jeans and a black sleeveless T-­shirt. He had on black combat-­style boots. His head was shaved, but his face was hidden by a full beard. The other guys followed, lining up alongside him.

“The money?” the driver said.

The stranger patted the back pocket of his jeans.

“Good.” The driver nodded toward the car. “Backseat. Get in.”

“So I can take you to Michael.”

The stranger shook his head. “The deal was, you tell me where Michael is.”

“Tell you. Show you. What’s the difference?”

The stranger said nothing.

“Come on. What are you waiting for? Give me the money and get in the car.”

“I make a deal, I stick to it. You want the money, tell me where Michael is.”

The driver shrugged. “The deal’s changed. Take it or leave it.”

“Enough of this.” The driver reached behind his back and took a pistol from his waistband. “Cut the crap. Get in the car.”

“You were never going to take me to Michael.”

“You were going to take me to someone else. Someone who has questions for me.”

“No more talking. Get in the car.”

“Which means you can’t shoot me.”

“Which means I can’t kill you. Yet. I can still shoot you.”

The stranger said, “Can you?”

A witness would have said the stranger hardly moved at all but somehow in a split second he had closed the gap between them and had his hand on the driver’s wrist. Which he pulled up, like a proud fisherman hauling something from the sea. He forced the guy’s arm way above his head. He hoisted it so high the guy was raised up on his tiptoes. Then he drove his left fist into the guy’s side. Hard. The kind of punch that would normally knock a man down. And keep him down. Only the driver didn’t fall. He couldn’t. He was suspended by his arm. His feet slid back. The gun fell from his fingers. His shoulder dislocated. Tendons stretched. Ribs shattered. It was a grotesque cascade of injuries. Each one debilitating in its own right. But in the moment he hardly noticed any of them. Because his entire upper body was convulsing in agony. Searing bolts of pain shot through him, all stemming from one place. A spot just below his armpit, where a dense tangle of nerves and lymph nodes nestled beneath the skin. The exact spot that had just been crushed by the stranger’s massive knuckles.

The stranger retrieved the driver’s fallen gun and carried him over to the hood of the car. He laid him back, squealing and gasping and writhing on the dull paintwork, then turned to the other three guys and said, “You should walk away. Now. While you have the chance.”

The guy at the center of the trio stepped forward. He was about the same height as the driver. Maybe a little broader. He had hair, cropped short. No beard. Three chunky silver chains around his neck. And a nasty sneer on his face. “You got lucky once. That won’t happen again. Now get in the car before we hurt you.”

But he didn’t move. He saw the three guys swap furtive glances. He figured that if the guys were smart, they’d opt for a tactical retreat. Or if they were proficient, they would attack together. But first they’d work one of them around to the rear. He could pretend to check on the injured driver. Or to give up and get in the car. Or even to run away. The other two could create a distraction. Then, when he was in place, they would all rush in at once. A simultaneous assault from three directions. One of the guys was certain to take some damage. Probably two. But the third might have a chance. An opening might present itself. If someone had the skill to exploit it.

They weren’t smart. And they weren’t proficient. They didn’t withdraw. And no one tried to circle around. Instead, the center guy took another step forward, alone. He dropped into some kind of generic martial arts stance. Let out a high-­pitched wail. Feinted a jab to the stranger’s face. Then launched a reverse punch to the solar plexus. The stranger brushed it aside with the back of his left hand and punched the guy’s biceps with his right, his middle knuckle extended. The guy shrieked and jumped back, his axillary nerve overloaded and his arm temporarily useless.

“You should walk away,” the stranger said. “Before you hurt yourself.”

The guy sprang forward. He made no attempt at disguise this time. He just twisted into a wild roundhouse punch with his good arm. The stranger leaned back. The guy’s fist sailed past. The stranger watched it go then drove his knuckle into the meat of the guy’s triceps. Both his arms were now out of action.

“Walk away,” the stranger said. “While you still can.”

The guy lunged. His right leg rose. His thigh first, then his foot, pivoting at the knee. Going for maximum power. Aiming for the stranger’s groin. But not getting close. Because the stranger countered with a kick of his own. A sneaky one. Straight and low. Directly into the guy’s shin. Just as it reached maximum speed. Bone against toe cap. The stranger’s shoes. The only thing about him that wasn’t scruffy. Bought in London years ago. Layer upon layer of leather and polish and glue. Seasoned by time. Hardened by the elements. And now as solid as steel.

The guy’s ankle cracked. He screamed and shied away. He lost his balance and couldn’t regain it without the use of his arms. His foot touched the ground. The fractured ends of the bone connected. They grated together. Pain ripped through his leg. It burned along every nerve. Way more than his system could handle. He remained upright for another half second, already unconscious. Then he toppled onto his back and lay there, as still as a fallen tree.

The remaining two guys turned and made for the car. They kept going past its front doors. Past its rear doors. All the way around the back. The trunk lid popped open. One of the guys dropped out of sight. The shorter one. Then he reappeared. He was holding something in each hand. Like a pair of baseball bats, only longer. And thicker and squarer at one end. Pickax handles. Effective tools, in the right hands. He passed one to the taller guy and the pair strode back, stopping about four feet away.

“Say we break your legs?” The taller guy licked his lips. “You could still answer questions. But you’d never walk again. Not without a cane. So stop dicking us around. Get in the car. Let’s go.”

The stranger saw no need to give them another warning. He’d been clear with them from the start. And they were the ones who’d chosen to up the ante.

Lee Child is the author of more than two dozen New York Times bestselling Jack Reacher thrillers, with most having reached the #1 position, and the #1 bestselling complete Jack Reacher story collection, No Middle Name. Foreign rights in the Reacher series have sold in one hundred territories. A native of England and a former television director, Lee Child lives in New York City and Wyoming. 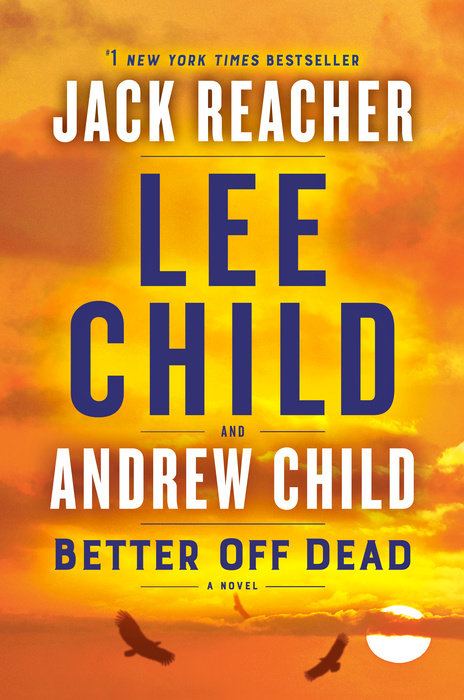