“No Plan B is not to be missed. A perfectly plotted, fast-paced thriller, with bigger twists than ever before. It’s no wonder Jack Reacher is everyone’s favorite rebel hero.”—Karin Slaughter

ONE OF THE BEST BOOKS OF THE YEAR: Reader’s Digest

In Gerrardsville, Colorado, a woman dies under the wheels of a moving bus. The death is ruled a suicide. But Jack Reacher saw what really happened: A man in a gray hoodie and jeans, moving stealthily, pushed the victim to her demise—before swiftly grabbing the dead woman’s purse and strolling away.

When another homicide is ruled an accident, Reacher knows this is no coincidence. With a killer on the loose, Reacher has no time to waste to track down those responsible.

But Reacher is unaware that these crimes are part of something much larger and more far-reaching: an arsonist out for revenge, a foster kid on the run, a cabal of powerful people involved in a secret conspiracy with many moving parts. There is no room for error, but they make a grave one. They don’t consider Reacher a threat. “There’s too much at stake to start running from shadows.” But Reacher isn’t a shadow. He is flesh and blood. And relentless when it comes to making things right.

For when the threat is Reacher, there is No Plan B.

An excerpt from No Plan B

The meeting was held in a room with no windows.

The room was rectangular and it had no windows because it had no external walls. It was contained within a larger, square room. And the square room was contained within an even larger octagonal room. Together this nest of rooms formed the command hub of Unit S2 at the Minerva Correctional Facility in Winson, Mississippi. Along with its sister segregation unit, S1, it was the most secure place in the complex. It was laid out with walls like the concentric rings of a medieval castle. Designed to be impregnable. From the outside, even if attacked by the most determined rescuers. And from the inside, even during the most extreme riot.

The safety aspect was welcome but the reason the hub had been chosen for this meeting was its seclusion. The opportunity it offered for complete secrecy. Because the rest of Unit S2 was vacant. There were no guards. No admin staff. And none of its 120 isolation cells were in use. They weren’t needed. Not with the way the prison was run under its current management. The progressive approach was a cause of great pride. And great PR.

There were six men in the room, and this was the third covert meeting they’d held there in the last week. The men were spread out around a long, narrow table and there were two spare chairs pushed back against a blank, white wall. The furniture was made of bright blue polycarbonate. Each piece was cast in a single mold, leaving no joins or seams. The shape and material made the items hard to break. The color made it hard to conceal any parts that did somehow get smashed off. It was practical. But not very comfortable. And all left over from the previous administration.

Three of the men were wearing suits. Bruno Hix, Minerva’s Chief Executive and joint founder, at the head of the table. Damon Brockman, Chief Operating Officer and the other joint founder, to Hix’s right. And Curtis Riverdale, the prison’s warden, next to Brockman. The man next to Riverdale, the last one on that side of the table, was wearing a uniform. He was Rod Moseley, Chief of the Winson Police Department. On the opposite side, to Hix’s left, were two guys in their late twenties. Both were wearing black T-­shirts and jeans. One had a broken nose and two black eyes and a forehead full of angry purple bruises. The other had his left arm in a sling. Both were trying to avoid the other men’s eyes.

“So is there a problem or not?” Brockman shrugged his shoulders. “Can anyone say for sure that there is? No. Therefore we should go ahead as planned. There’s too much at stake to start running from shadows.”

“No.” Riverdale shook his head. “If there might be a problem that means there is a problem, the way I see things. Safety first. We should—­”

“We should find out for sure,” Moseley said. “Make an informed decision. The key is, did the guy look in the envelope? That’s what we need to know.”

“Well?” Moseley stretched his leg out under the table and kicked the guy with the sling. “Wake up. Answer the question.”

“Give me a break.” The guy stifled a yawn. “We had to drive all night to get to Colorado. And all night again to get back here.”

“Cry me a river.” Moseley prodded the guy with his foot. “Just tell us. Did he look?”

The guy stared at the wall. “We don’t know.”

“Looking in the envelope isn’t definitive,” Riverdale said. “If he did look, we need to know if he understood what he saw. And what he plans to do about it.”

“Whether the guy looked is irrelevant,” Brockman said. “So what if he did? Nothing in there gives the slightest clue to what’s going on.”

“So what?” Brockman raised his hands. “Friday’s an occasion for joy and celebration. There’s nothing remotely suspicious about it.”

“But the photograph was in there.” Riverdale jabbed the air with his finger in time with each syllable. “Eight by ten. Impossible to miss.”

“And again, that means nothing.” Brockman threw himself back in his chair. “Not unless the guy actually comes here. If he shows up on Friday. And even then we’d be OK. We chose very carefully.”

“We didn’t. How could we? We only had nine to pick from.”

A smile flashed across Moseley’s face. “Ironic, isn’t it? That the one we picked really is innocent.”

“I wouldn’t call it ironic.” Riverdale scowled. “And there weren’t nine. There were only five. The others had family. That ruled them out.”

“Nine?” Brockman said. “Five? Whatever. The number doesn’t matter. Only the outcome matters. And the outcome is good enough. Even if the guy shows up, how close would he get? He’d be a hundred feet away, at least.”

“He doesn’t have to show up. He could see it on TV. Online. Read about it in the newspapers.”

“The warden has a point,” Moseley said. “Maybe it would be better not to draw so much attention this time. Maybe we should cancel the media. We could float some BS about respecting the inmate’s privacy, or something.”

“No need.” Brockman shook his head. “You think this guy has a television? A computer? A subscription to The New York Times? He’s destitute, for goodness’ sake. Stop looking for trouble. There isn’t any.”

Hix tapped his fingertips on the tabletop. “Media exposure is good for the brand. We always publicize. We always have. If we change now we would only attract more attention. Make people think something is wrong. But I do think we need to know. Did he look?” Hix turned to the guys in the T-­shirts. “Best guess. No wrong answer. The chips fell where they fell. We understand that. Just tell us what you believe.”

The guy with the broken nose took a deep breath through his mouth. “I think he looked.”

“Not one hundred percent.”

“OK. Where was the envelope?”

“Where was the bag?”

“I needed my hands free.”

“Where was it when the car arrived?” Hix said.

The guy with the sling said, “On the ground.”

“In the same place?”

“How could we know? I wasn’t there when Robert put it down. Robert wasn’t conscious when I picked it up.”

Hix paused for a moment. “OK. How long was the guy alone with the bag?”

“We don’t know. Can’t have been long. A couple of minutes, max.”

“Right,” the guy with the broken nose said. “And the bag was ripped, remember. How did that happen? And why? We didn’t do it.”

Brockman leaned forward. “It was a crazy scene, from what you told us. Wreckage everywhere. Total chaos. The bag probably got ripped by accident. It doesn’t sound like some major clue. And the other two haven’t reported that he looked.”

The guy with the sling said, “They haven’t reported at all. We don’t know where they are.”

Brockman said, “Must still be on their way back. Phone problems, probably. But if there was anything to worry about they would have found a way to let us know.”

“And the guy didn’t mention anything about it to the police,” Moseley said. “I’ve talked to the lieutenant over there a couple times. That has to mean something.”

“I still think he looked,” the guy with the broken nose said.

“We should pull the plug,” Riverdale said.

“That’s the dumbest thing I ever heard,” Brockman said. “We didn’t set the date. We didn’t pick the time. The judge did when he signed the release order. You know that. We pull some bullshit delaying tactic, we wind up ass-­deep in inspectors. You know where that would land us. We might as well shoot ourselves in the head, right here, right now.”

Riverdale scowled. “I’m not saying we delay. I’m saying we go back to the original plan. The switch was always a mistake.”

“That would solve Friday’s problem. If there is one. But then we’d have no way out of the bigger jam we’re in. Carpenter’s situation.”

“I said from the start, the solution to that is simple. A bullet in the back of his head. I’ll do it myself if you’re too squeamish.”

“You know what that would cost? How much business we would lose?”

“We’ll lose a lot more than money if this guy joins the dots.”

Lee Child is the author of more than two dozen New York Times bestselling Jack Reacher thrillers, with most having reached the #1 position, and the #1 bestselling complete Jack Reacher story collection, No Middle Name. Foreign rights in the Reacher series have sold in one hundred territories. A native of England and a former television director, Lee Child lives in New York City and Wyoming. 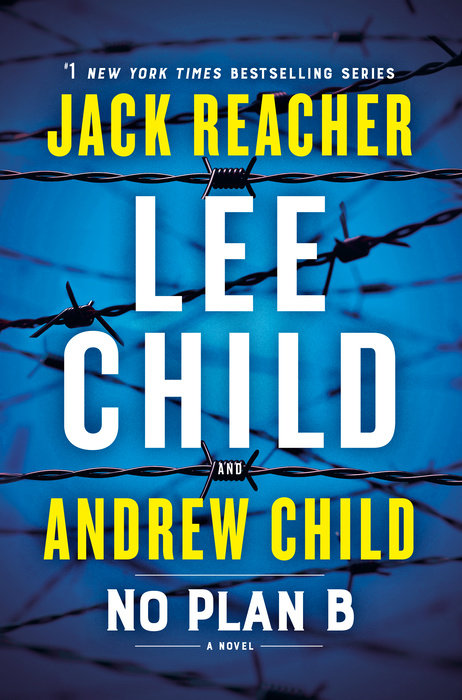