How the Catholic Church Lost Its Soul

“Courageous and inspiring.”—Karen Armstrong, author of The Case for God

“James Carroll takes us to the heart of one of the great crises of our times.”—Stephen Greenblatt, author of The Swerve

An eloquent memoir by a former priest and National Book Award–winning writer who traces the roots of the Catholic sexual abuse scandal back to the power structure of the Church itself, as he explores his own crisis of faith and journey to renewal

James Carroll weaves together the story of his quest to understand his personal beliefs and his relationship to the Catholic Church with the history of the Church itself. From his first awakening of faith as a boy to his gradual disillusionment as a Catholic, Carroll offers a razor-sharp examination both of himself and of how the Church became an institution that places power and dominance over people through an all-male clergy.

Carroll argues that a male-supremacist clericalism is both the root cause and the ongoing enabler of the sexual abuse crisis. The power structure of clericalism poses an existential threat to the Church and compromises the ability of even a progressive pope like Pope Francis to advance change in an institution accountable only to itself. Carroll traces this dilemma back to the Roman Empire and the Middle Ages, when Scripture, Jesus Christ, and His teachings were reinterpreted as the Church became an empire. In a deeply personal re-examination of self, Carroll grapples with his own feelings of being chosen, his experiences as a priest, and the moments of doubt that made him leave the priesthood and embark on a long personal journey toward renewal—including his tenure as an op-ed columnist at The Boston Globe writing about sexual abuse in the Church.

Ultimately, Carroll calls on the Church and all reform-minded Catholics to revive the culture from within by embracing anti-clerical, anti-misogynist resistance and staying grounded in the spirit of love that is the essential truth at the heart of Christian belief and Christian life.

An excerpt from The Truth at the Heart of the Lie

The Murder of a Soul

We showed no care for the little ones; we abandoned them.

Ireland is ground zero for the Church’s current moral implosion, beginning a decade ago when, in 2009, the findings of an Irish government commission chaired by Judge Sean Ryan, called the Ryan Report, were released. The Catholic Church’s sexual abuse scandal had been ignited in Boston some years before that, but in Ireland the calamity was even more catastrophic. By every measure, the Church in Ireland was in ruins by 2018, but that year Pope Francis arrived there for a major papal visitation as if everything were fine.

Even before The Boston Globe began publishing its predator priest stories in 2002—the Spotlight series that became the basis for a hit movie released in 2015—the government of Ireland had launched an investigation into rumors of child sexual abuse in the island nation’s residential institutions for children, nearly all of which were run by the Catholic Church. The inquiry took most of a decade. Finally, in 2009, its results were revealed in the Ryan Commission’s 2,600-page summary of conditions in more than 250 Church-run institutions. Despite a long-established tradition of government inspections and supervision, Catholic priests, brothers, and nuns had, across decades, violently tormented—tortured—thousands of children. The commission found that inmates of Catholic orphanages and reformatories were no better than slaves—and, in many cases, sex slaves. Rape and molestation of boys were “endemic.”

The Ryan Commission’s findings were the first sign of a tsunami. Other reports were issued about other Irish institutions, including parish churches, schools, and homes for unwed mothers—the suddenly notorious “Magdalene laundries.” In those institutions, girls and women were condemned to lives of coercive servitude. The ignominy of the so-called Magdalene asylums was laid out in numerous documentary films and in Philomena (2013), the high-profile true-life movie starring Judi Dench. The scandal climaxed with the discovery in 2017 that between 1925 and 1961 at the Bon Secours Mother and Baby Home, in Tuam, county Galway, nearly eight hundred babies died, many of malnourishment and neglect. Their corpses were disposed of in mass graves and sewage pits. That revelation led to the establishment of yet another commission, which reported in 2019 that, in numerous institutions, the corpses of hundreds of babies had been routinely provided, into the 1970s, to medical schools for dissection. Many hundreds of other dead babies in the care of Church-run homes were simply unaccounted for. Not only priests had behaved despicably; so had nuns.

Revelations of predator priests and complicit bishops had been rocking the Catholic world for years, but it was in Ireland that the swirling scandal now touched down, making that country the eye of the storm. Before, during, and after his arrival in the Emerald Isle for his 2018 visitation, Pope Francis expressed, as he put it, “shame and sorrow,” but during his time there, in a series of public statements and private meetings, he showed no real sign of understanding the need for significant Church reform, not to mention authentic acts of penitence. There was a terrible pro forma quality to the pontiff’s actions, as if the festering scandal had been reckoned with, becoming one more item on the Church’s regular agenda.

Yet after Francis left Ireland, returning to Rome, the tempest of Catholic sexual abuse continued to shake the Church. In Germany, a leaked Catholic bishops’ investigation revealed that in the years 1946 through 2014, 1,670 clergy had assaulted 3,677 children. In the United States, a Pennsylvania grand jury found just then that, over the course of seventy years, more than a thousand children had been abused by more than three hundred priests, with Church authorities successfully silencing the victims, deflecting law enforcement, and shielding the predators. The grand jury charges told of a ring of pedophile priests who commonly gave their young targets the gift of a gold cross to wear so that other predator priests could recognize an initiated child who would not resist an overture. “This is the murder of a soul,” said one victim who offered testimony before the grand jury.

While the pope traveled to Ireland and shortly thereafter, attorneys general in fifteen other American states announced the opening of investigations into Church crimes, with the U.S. Department of Justice following suit at the federal level. Soon, in several states, teams of law enforcement agents, with jackets emblazoned with the word police and armed with search warrants, would burst into diocesan offices and seize records, as if they were raiding the dens of mobsters. This all amounted to an unprecedented campaign by civil authorities, who crossed previously sacrosanct boundaries of church-state separation to prosecute priestly abusers and enablers.

Confronted with the mounting evidence of priestly transgressions everywhere, Francis finally issued, in the late fall of 2018, a meek call for a four-day meeting of senior bishops to be held in Rome the following February under the rubric “The Protection of Minors in the Church.” To jaded Catholics, this seemed like putting Mafia chieftains in charge of a crime commission. Events would prove such skeptics to be right.

The complacency of the Catholic hierarchy seemed unshakable, even as horrible revelations of abuse continued to come in. Take the rape of nuns by priests and bishops, for example. Such a crime was once an unthinkable abomination: Priests raping nuns? What could that be but the foulest slander put out there by an anti-Catholic bigot?

But then, when Pope Francis did indeed acknowledge, in answer to a reporter’s question in early 2019, that such heinous crimes do occur in the Church and remain a mostly unaddressed problem, he did so with maddening equilibrium—despite it being a global phenomenon. In Africa, as the AIDS epidemic had taken hold, priests had coerced nuns into becoming sexual servants because, as virgins, they would not be likely to carry the HIV virus. It was reportedly common for such priests to sponsor abortions when the nuns became pregnant. Nuns had come forward in India to publicly charge priests with rape. “It’s true,” Francis said calmly in January of 2019. “There are priests and bishops who have done that.” The following April, a bishop was charged by Indian officials with rape and illegal confinement of a nun, whom he allegedly assaulted regularly over two years in the southern state of Kerala. The bishop denied the charge. The nun said she reported the bishop to the police only after having appealed to Church authorities repeatedly—and being ignored.

In February, a Washington Post report suggested that beginning early in his pontificate, Francis knew about the systematic priestly abuse of institutionalized deaf children in Argentina that had occurred when he lived there. The pope apparently had cooperated in keeping the horror secret. Following the long-established pattern, the abuse had been finally brought to light not by Church officials, but by civil authorities and the secular press. Deaf victims reported that they were discouraged from learning sign language in their Catholic institution. A hand sign they came to know, however, was the one often used by the abusive priests—the forefinger to the lips: Silencio! That silence had belonged to Pope Francis, too.

Meanwhile, that same February, Cardinal Theodore McCarrick, a former archbishop of Washington and one of the Church’s most powerful prelates, having been exposed by press reports, was finally found guilty by a Vatican tribunal of abusing a minor. He was being punished, the Vatican announced, by being stripped of his clerical standing.

This “reduction to the lay state” was described as a priest’s equivalent of the death penalty, but the supposedly humiliating punishment actually amounted to McCarrick’s being forced to assume the status of every other non-ordained person on the planet—a subtle revelation of the clerical caste’s disrespect for the laity. That manifestation is essential to the corruption of clericalism, which I was being forced, through all of this, to confront in full.

McCarrick was shown to have been a harasser of young men and boys, and his homosexuality sparked a broad scapegoating of gays as the source of Church dysfunction. A sensational book claimed that a cabal of gay priests and bishops dominated the Vatican itself. Still, in that same February of 2019, gay priests from the Netherlands openly objected to being blamed for the sexual abuse scandal, while on the front page of The Washington Post, beleaguered gay priests in America described themselves as living not in a closet but in a cage. Gay priests are imprisoned, they explained, by the very dysfunction they are expected to uphold.

The shameful revelations would not stop. The Vatican just then acknowledged that it had long-established secret protocols for handling “children of the ordained.” According to this policy, a priest who violated his vow of celibacy and fathered a child was encouraged to resign from the priesthood to “assume his responsibility as a parent,” but he was in no way required to do so. A Vatican expert explained that a priest’s fathering of a child was “not a canonical crime.” Estimates put the contemporary number of priests’ children in the thousands.

James Carroll is a distinguished scholar in residence at Suffolk University and a columnist for The Boston Globe. He is the author of ten novels and seven works of fiction. He lives in Boston.

How the Catholic Church Lost Its Soul 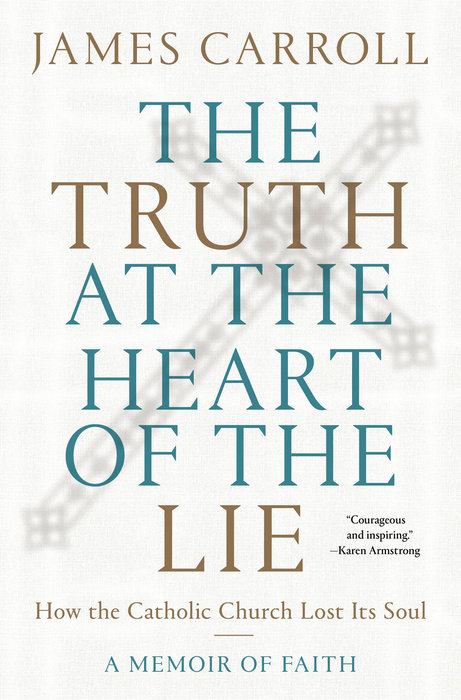