Lindy Carmichael isn’t feeling particularly joyful when she returns home to Wenatchee, Washington, for Christmas. The man she thought was “the one” has cheated on her with her best friend, and she feels completely devoid of creativity in her graphic-design job. Not even carolers or Christmas cookies can cheer her up—but Lindy’s mother, Ellen, remembers an old tradition that might lift her daughter's spirits.

Reading through a box of childhood letters to Santa and reminiscing about what she'd wished for as a young girl may be just the inspiration Lindy needs. With Ellen's encouragement, she decides to write a new letter to Santa, one that will encourage her to have faith and believe just as she’d done all those years ago. Little does Lindy know that this exercise in gratitude will cause her wishes to unfold before her in miraculous ways. And, thanks to some fateful twists of Christmas magic—especially an unexpected connection with a handsome former classmate—Lindy ultimately realizes that there is truly no place like home for the holidays.

An excerpt from Dear Santa

“Home.” The moment Lindy Carmichael turned down Apple Orchard Lane in Wenatchee, Washington, she released a deep sigh. An immediate sense of familiar warmth and welcome filled her. She had two full weeks off to celebrate Christmas and New Year’s with her family. If ever she needed a break, it was this year. And what a truly terrible, awful year it had been.

Three years ago, after working for several small companies, Lindy had been hired for her dream job with a marketing and website design company. Her degree in computer science, with a specialty in graphics and visualization, plus her work history, was tailor-made for Media Blast. Confident that her creative talent would be a company asset, she’d been sure she’d fit right in. While she loved her job and the opportunity it afforded her, she couldn’t help feeling underappreciated. Just before Lindy left for vacation, she’d submitted a campaign for the Ferguson Group, one of their largest accounts. This opportunity to prove her worth was exactly what she’d been waiting for. If her proposal was chosen, then she would get the recognition she deserved. Lindy had never been a quitter. Her dad had once told her that if she did more than she was paid to do, her hard work would eventually be noticed. With time, she’d be rewarded for what she did. Lindy held on to that philosophy and had given this job her all.

Pushing thoughts of work problems from her mind, she pulled in to the driveway of the home where she’d spent the majority of her life. Twinkling lights lining the edge of the roofline greeted her, along with twin reindeer who stood guard over the snow-covered lawn. A large evergreen wreath with silver and blue bulbs hung on the front door. Home for Christmas. This was exactly what she needed to escape the doldrums that had plagued her over the last six months.

Lindy hadn’t completely exited her car before the front door flew open and her mother and Beau, the family dog, hurried toward her on the freshly shoveled driveway. Her mother’s arms reached for Lindy, while Beau braced his front legs against her thighs, tail wagging, craving her attention. With barely enough time to inhale the shockingly cold air, Lindy was pulled inside the warm house by her mother, who then enveloped her in a full-body hug. Beau barked his welcome, running circles around her, yipping his excitement.

“I didn’t think you’d ever get here,” Ellen Carmichael said, helping Lindy off with her coat. “How was the pass? I checked the weather conditions, and it was snowing over Snoqualmie. Did you have any trouble? I worry that you don’t have snow tires . . . ​I realize you don’t need them living in Seattle, but it’s a must this side of the mountains.”

“Mom, my goodness, give me a minute to catch my breath,” Lindy said, giggling. Home. To be surrounded by love was what she needed most. The kitchen was warm, and her mother had a batch of freshly baked cookies lined up in rows on the countertop. Baking was an expression of love in Lindy’s family. Her mother started early for the annual Christmas Eve gathering with longtime friends. Each family would leave with an overflowing plate of homemade cookies.

“Did you eat breakfast?” her mother asked her, as she reached for the coffeepot.

“No. I wanted to get on the road as soon as it was daylight.” Traffic over Snoqualmie Pass could be a problem in winter, and it was often closed due to avalanche concerns. Lindy felt the earlier she got out of Seattle and to the other side of the mountain, the better.

Lindy cut her mother off, eyeing the cookies on the countertop. “Coffee and a couple of those thumbprints will carry me until lunchtime.”

Her mother opened the cupboard for a mug, while Lindy helped herself to her favorite Christmas cookies.

Sitting across from her, Lindy smiled at her mother. This was what she’d held in her mind for the last several months while she weathered the storms life had tossed at her. Home and Christmas. This was the perfect combination to help her out of this deep emotional slump.

Her position with Media Blast was only the tip of the proverbial iceberg. Not wanting her mother to fret, Lindy had kept the majority of her various troubles since summer to herself. Nor was she looking to share them the minute she arrived home. Maybe in a few days, after she’d soaked in the serenity of being at home, she would feel inclined to explain.

After sampling the first cookie, Lindy closed her eyes. “I swear I could eat a dozen of these.”

“But you won’t. I have lunch planned.”

Only then did Lindy notice the simmering pot on the stove. “Did you make pasta e fagioli?” The soup, made with cannellini and kidney beans and small pasta simmering in a rich tomato broth, was a family tradition.

“With sourdough buns,” her mother added. The starter had been handed down from her father’s grandfather, who’d once lived in Alaska. He claimed it came from an old Klondike miner and had been kept alive since the 1890s. Lindy knew her parents had shared it with various family and friends. For as long as she could remember, Lindy’s father had made sourdough pancakes every Sunday morning for breakfast. On special occasions, her mother baked the buns, using a recipe that had been passed down from her grandmother.

“Mom,” Lindy said and groaned, “you’re going to spoil me.”

“That’s exactly what I intend to do. It’s been far too long since you’ve been home.”

“I was here for the Fourth of July,” she reminded her. She’d come home shortly after getting her own apartment, and just before she’d learned the terrible truth about . . . ​She stopped her thoughts, refusing to let them drift toward even more unpleasantness.

“Yes, and that was months ago. It isn’t like we’re a thousand miles apart. Seattle is barely three hours away in traffic.”

“I know, I know, but I moved, remember, and then there was this project for work that demanded nearly every weekend. But it was worth it, because I earned two weeks off to spend the holidays with you, Dad, Chad, Ashley, and Peter.” Her younger brother had married his high school sweetheart and worked at the apple warehouse in supply-chain management. Within a year, Ashley and Chad had presented her parents with an amazing grandson. Lindy was crazy about four-year-old Peter. They connected every week through FaceTime, and she mailed him gifts so often, Chad had to ask her to resist. Ashley was currently pregnant with a little girl they had decided to name Grace. She was due to arrive the first week of March.

When Lindy finished her coffee and cookies, she unloaded her car and brought her suitcase into her bedroom. Standing in the doorway to the familiar room, she found it exactly as it’d been when she’d left for college. She sat on the edge of her bed and looked around, remembering how carefree life had been when she was a teenager.

A poster of the Jonas Brothers was tacked to one wall. Her pom-poms from dance team were tucked against the corner of the bulletin board, and the corsage she’d worn to her senior prom was pinned to the board.

Peace washed over her, as she wrapped all that was familiar around her like a heated blanket.

“Lunch will be ready soon,” her mother called from the kitchen, soon after Lindy had unpacked. She tucked the few wrapped gifts she’d brought with her under the Christmas tree that adorned the living room, in front of the picture window that looked out over Apple Orchard Lane.

“I’ll be right there.” After admiring the tree, Lindy joined her mother, who had already dished up two steaming bowls of soup. The breadbasket sat in the middle of the table, along with a butter dish.

After a simple grace, Lindy lifted her spoon. “I dreamed about this soup. It never tastes the same when I make it, and I follow the recipe to the letter. Somehow it always tastes better when you cook it.”

“That’s because it’s made with love.”

Lindy wanted to discount this extra ingredient that her mother insisted made the difference. How could she, though, when there didn’t seem to be any other explanation?

Her mother waited until Lindy had finished her lunch before she paused, her eyes serious. Looking directly at Lindy, she said, “I’m waiting.”

“Waiting for what?” Lindy asked.

“Waiting for you to tell me what’s going on with you, and please don’t try to brush this off. You’d best tell me before—”

With narrowed eyes, her mother waved her index finger like a clock’s pendulum. “Lindy Rose, I’m your mother. No one knows you better than me. I’ve suspected for quite some time you’re unhappy. Now spill.”

Lindy was afraid that once she started, she might not be able to stop. 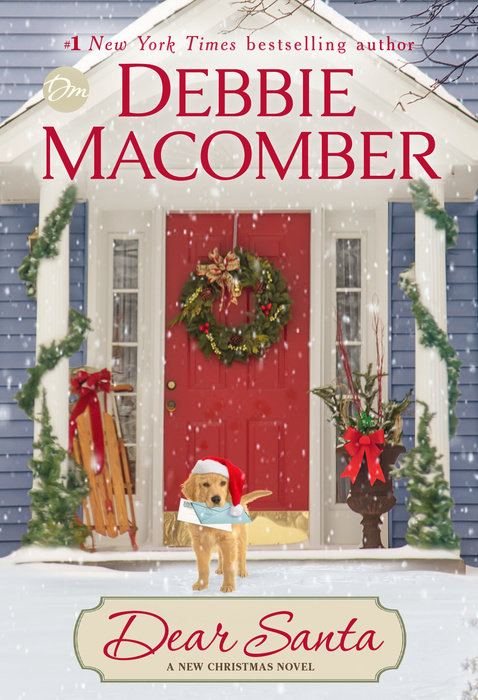