NEW YORK TIMES BESTSELLER • After her marriage ends, one woman’s struggle to pick up the pieces finally leads to a new beginning—but is the past truly behind her? In this poignant novel, #1 New York Times bestselling author Debbie Macomber explores the powerful intersections of love and family.

It’s been nearly six years since Julia Jones had her heart broken. After her husband became involved with another woman, she did everything she could to save their marriage, to no avail. The couple’s two daughters continue to stand by Julia in the wake of their father’s behavior—and they’ve had a tough time getting along with the other woman who’s become their stepmother. Distraught after selling the family home, Julia moves into a condominium complex that offers the warmth and charm of a fresh start. Now, having settled into her new community and sold her successful interior design business, she’s embraced a fulfilling new life, one that doesn’t seem to need a man in it. Her beloved father’s trusty saying is ringing truer than ever: It’s better this way.

But when Julia meets a handsome new resident in the building’s exercise room, she can’t help but be drawn to him. Heath Wilson is a welcome change from the men she’s encountered on the occasional—mostly disastrous—dates her sister has eagerly planned for her over the years. As she and Heath, a divorcé himself, begin to grow close, their friendship blossoms into an unexpected love. However, they soon realize that combining families proves to be a challenge, even though their four children are adults.

When a dramatic revelation threatens the happiness they’ve found, Julia and Heath must reconcile their love for their children with their love for each other. If they can’t, their bright future together may be nothing but a dream.

An excerpt from It's Better This Way

Julia woke, glanced at the clock on her nightstand, and wondered how long it would take for her to sleep past six. Old habits die hard, even though she no longer had any need to set her alarm. For more years than she could remember, she had risen at six every morning. Her business, West Coast Interiors, had been sold, and she was easing into retirement, working part-time as a consultant.

The decision to sell had been a weighty one and followed on the heels of her mother’s passing. As Julia neared sixty, she felt she had plenty of good years left. Then an offer had come through that was far and above her expectations. Julia didn’t feel like she could turn it down. She wasn’t ready to give up her work entirely, which was why she’d made continuing as a consultant part of the agreement. The buyers had asked her to stay on, as well. She could work as much or as little as she wanted. After finishing this latest project, she’d decided to take a few days off and test what semiretirement felt like.

This certainly wasn’t how she’d once anticipated retirement. There’d been a time when she’d hoped to travel the world with her husband. Julia longed to explore Europe and Asia. As of now, traveling alone held little appeal. Perhaps one day.

As she knew it would, her dream home had sold less than a week after it had been listed. So many changes had come into her life. After her divorce was final, she’d rented an apartment before making a decision on her new home. She knew she wanted to remain living in Seattle, and possibly in the downtown area itself.

The city was her home and there had been enough upheaval in her life without facilitating another major life change. Her girls were close, as was her sister and her family. She waited a year to start looking, and then the search had taken on a life of its own.

For three long years, Julia was on an endless quest to find a place she felt she could call home. The Heritage was an older brick condo building, built in the 1960s, that was filled with warmth and character. So many of the newer high-rise buildings were steel structures, with little to no personality or charm. Set in the heart of the city, it was close enough for her to walk down to Pike Place Market for fresh produce and seafood. The 5th Avenue theater was nearby, as was plenty of shopping. As a bonus, there was a coffee shop next door, as well as several restaurants on the block.

The instant she stepped into The Heritage and viewed the large fountain in the center lobby, Julia sensed this was the place for her. The building, with only twelve floors, rarely had a vacancy. Julia was patient, and in time a unit became available. She’d lived here a little over two years now and loved the community of friends she’d made. Because it was an older building, The Heritage didn’t have many of the amenities of the newer condos that attracted the techies from Amazon and Microsoft. This move was a new beginning for her. A fresh start, and she had settled in comfortably.

Tying the sash on her silk robe, she wandered into the kitchen and brewed a cup of coffee. Lazy mornings generally happened only on Sundays, when she attended the late service at church. She needed to create a new schedule for herself—or, on second thought, no schedule at all.

She’d just taken her first sip of coffee when her phone rang. It was her sister, Amanda.

“Hey, you’re up early,” Julia said by way of greeting.

Julia’s niece, an only child, was especially close to her parents. She suspected what was coming. Carrie still lived at home, and the failure to break out on her own was a thorn between Amanda and her husband, Robert.

“Robert and I had another heated discussion about Carrie last night,” her sister said with a groan. “He wants Carrie to move out. I mean, she’s twenty-eight. It’s time. Past time,” she added in defeat. “The problem is: How do we tell her?”

“Glad it’s not up to me.” As Carrie’s godmother, Julia dearly loved her niece. She understood her sister’s concern. Carrie had graduated from college with a degree in French literature. A degree that didn’t offer much in the way of career opportunities. Never one to be idle, Carrie had applied for several jobs, many of which had lasted only a few months.

Since her graduation from college, Carrie had steadily drifted from one position to another. She’d been a receptionist for a real estate company, worked for an accountant, had done a stint at an employment agency, sold cosmetics at a department store as a beauty specialist. And those were only the jobs Julia could remember. Except for that brief time when Carrie had sold high-end knives, of which Julia had a set. Her niece wasn’t lazy, she just wasn’t particularly employable. Six years after graduating from college, she still hadn’t found a job that suited her unique set of skills.

Carrie was great with people, caring and conscientious, and a good employee while she lasted. The problem was that wherever Carrie worked, she didn’t earn enough to support herself, and then she quit when she grew bored. Consequently, she lived at home.

“I was hoping you had some pearls of wisdom to give me.” Amanda sounded utterly defeated.

“Sorry, you’re on your own with this one, little sister.”

“I remember the movie.” Amanda continued, “The parents plotted to convince their son to move out of the house. I don’t know that Robert and I could do that. I know he’s right; we aren’t helping Carrie move forward in life. Only I don’t know what else to do. She’s such a wonderful daughter and always has been. It’s not like we can kick her out. She’s our daughter.”

Julia didn’t know, either. She felt bad for her sister and wished she knew how to advise her. “Just be honest with her.”

Amanda sighed. “You make it sound simple and it isn’t.”

“I know.” Julia sympathized and wished she had a solution to offer. She knew Robert had offered to pay for an apartment for Carrie. She’d refused. Carrie insisted she would make it on her own or not at all.

“There’s another reason I called,” Amanda said, her voice brightening.

Simply by her sister’s tone, Julia again knew what was coming.

“I have someone I want you to meet.”

“No,” Julia said and moaned inwardly.

“Come on. Don’t be so stubborn. Okay, so you’ve had a few dating disappointments . . .”

“A few, yes. More than enough to know that whoever it is, I’m not interested.”

“Yes, really.” This was an unwelcome subject.

“Do you seriously want to live the rest of your life alone?”

“Amanda, please, you know how I feel about this.” Following her divorce, Julia’s sister and other friends had made continuous efforts to introduce Julia to a variety of single men her age. Most were divorced and carried more baggage than an international airline. She’d suffered through these attempts until she decided to give up dating entirely, even if it meant living the rest of her life single. She was content, happy, and had moved on, for the most part, without bitterness or resentment. The first couple years following her divorce had been a struggle until she wrote Eddie a long good-bye letter. Although she’d never mailed it, the process had given her a sense of closure. Even more, it helped her accept her life as it was; she didn’t need a man to feel complete. The letter and the aftermath had freed her, changed her outlook, which allowed her to move forward.

Eddie appeared to be happy. She spoke to him only about matters that involved their daughters, which were rare, now that both Hillary and Marie were in their twenties and on their own.

“Are you sure?” Amanda asked again. “Frank is perfect for you. Please reconsider.”

“Okay, then, but you’re missing out.”

“If you say so,” Amanda said, her words heavy with doubt.

They spoke for a few minutes longer before Amanda ended the call. 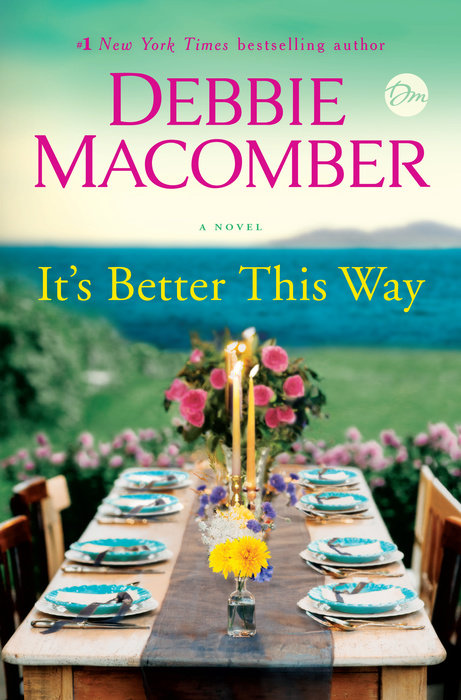