A Memoir of Finding Joy When Your World Goes Dark

“Both timeless and timely, this is a book of wisdom and wonder” (Geraldine Brooks, Pulitzer Prize–winning author of March), a deeply personal exploration of what can sustain us through our darkest moments.

“What has fascinated and sustained me over these last few years has been the notion that we have the ability to find, nurture, and carry our own inner, living light—a light to ward off the darkness. This is not about burning brightly; it’s about yielding a more simple phosphorescence—being luminous, having stored light for later use. Staying alive, remaining upright, even when lashed by doubt.”

After surviving a difficult heartbreak and battle with cancer, acclaimed author and columnist Julia Baird began thinking deeply about how we, as people, persevere through the most challenging circumstances. She started to wonder, when we are overwhelmed by illness, loss or pain, or a tragedy outside our control: How can we keep putting one foot in front of the other? Baird went in search of the magic that fuels the light within—our own phosphorescence. In this stunning book, she reflects on the things that lit her way through the darkness, especially the surprising strength found in connecting with nature and not just experiencing awe and wonder about the world around her, but deliberately hunting it, daily.

Baird also writes about crossbeams of resilience: nurturing friendships and a quiet faith, pursuing silence, fighting for what she believes in, the importance of feeling small, learning from her mother's example of stoic grace. She also explores how others nurture their inner light, interviewing the founder of the modern forest therapy movement in Tokyo, a jellyfish scientist in Tasmania, and a tattooed priest from Colorado, among others.

Weaving together candid and moving memoir with deep research and reflections on nature and the world around her, Baird inspires readers to embrace new habits and to adopt a phosphorescent outlook on life, to illuminate ourselves and our days—even in the darkest times.

An excerpt from Phosphorescence

Lessons from a Cuttlefish

Those who dwell, as scientists or laymen, among the beauties or mysteries of the earth are never alone or weary of life. . . . Their thoughts can find paths that lead to inner contentment and to renewed excitement in living. Those who contemplate the beauty of the earth find reserves of strength that will endure as long as life lasts.

—­RACHEL CARSON, THE SENSE OF WONDER

The first time I saw a cuttlefish swimming in the wild I was astounded by how prehistoric and alien it looked. Cuttlefish are astonishing creatures, with heads like an elephant’s, eight arms they occasionally splay then join together like a trunk, and small bodies ringed with thin, rippling fins that look like a silk shawl. They glide across the ocean floor, changing their color to match the surface underneath them, from gold above sand to brown and red over seaweed, and even their texture, from smooth to thorny, blends in with the background so effectively that they are often noticeable only when they move their silken frills.

Cuttlefish are not just otherworldly in appearance. Consider these facts: Their pupils are shaped like the letter “W,” and it has been speculated that cuttlefish eyes are fully developed before birth and that the young start observing their surroundings while still in the egg. Their blood is colorless until exposed to air, when it turns blue-­green. They have three hearts and a doughnut-­shaped brain that is larger in proportion to its body size than that of any other invertebrate. The cuttlefish bone—­a white oval-­shaped object often seen washed up on beaches or in parakeet cages—­is actually a thick, calcified internal shell that helps cuttlefish control flotation, and separates them from fellow cephalopods such as squids and octopuses. There are four or five male cuttlefish for every female—an excellent ratio in my view—­but all live for only a year or two.

For me, cuttlefish are symbols of awe. After my first sighting, I was charged with a peculiar kind of electricity for hours. They still have this effect on me. I regularly spend the winter admiring them, then mourn when the spring tides cast their light white bones onto the shore.

When I dive down to swim alongside cuttlefish, as I have several times this week, the world slows to the rhythm of ruffling skin. They rarely flee and are sometimes quite friendly. Seeing them regularly in the bay at the foot of my hill has given me an unexpected insight into awe. If I had guessed that spying them gliding along reefs could be part of my daily ritual, I would have devoted myself to ocean swimming decades ago.

Peter Godfrey-­Smith, a professor of philosophy and history, who also lives on my hill, likens the giant cuttlefish, which can grow to a meter in length, to “an octopus attached to a hovercraft” with arms like “eight huge and dexterous lips.” He reminds us that “the mind evolved in the sea. All the early stages took place in water: the origin of life; the birth of animals, the evolution of nervous systems and brains, and the appearance of the complex bodies that make brains worth having. . . . When animals did crawl onto dry land, they took the sea with them. All the basic activities of life occur in water-­filled cells bounded by membranes, tiny containers whose insides are remnants of the sea.” In other words, the sea is inside us.

If you joined the hundreds of people in my swim squad, you might think at first that the routine was simply about getting a solid bout of exercise before the day begins. We meet after sunrise at Sydney’s Manly Beach, swim out to the headland, then arc across a protected marine bay to another beach.

The caps we wear are bright pink. The name we call ourselves, the Bold and Beautiful, is a bit daft, but it’s a reminder that the squad was formed years ago by middle-­aged women who were too nervous to swim the distance alone. This morning swim was never about skill, but about pluck.

Most days, at some spot along the mile-­long route, heads will cluster, arms pointing down under the water at enormous blue gropers, cuttlefish in various states of disguise (also occasionally breeding, or devouring each other), bearded wobbegongs, Port Jackson sharks, eagle rays, and even tiny darting turtles and seahorses. Just this week, a pod of dolphins curved past me as I swam around the headland.

In early winter, dozens of young dusky whaler sharks usually swarm the bay, only a few meters beneath us, migrating only after they have become large enough to make people nervous—­there’s a reason a collective term for sharks is a “shiver.” (While I was writing this, a dawn swimmer was bitten by a shark he says he bumped into in the dark sea while he wasn’t wearing a headlight. The fact that it was a usually mild gray nurse shark meant we were able to continue swimming without fear.)

One day, a whale glided into the bay and played with the swimmers for an hour—­though I refuse to talk about it because I wasn’t there. (I had to read about it instead in The Daily Telegraph, under the headline a whale of a day.) My atheist friends who were there described it as like a prayer or quasi-­religious experience; their faces turned solemn at the recollection. Okay, whatever.

Our outings are not always ideal. Frequently we battle thickets of seaweed, powerful currents, and daunting, crashing waves that pull you under and spin you around, or dump you against the sandy floor. Occasionally the swell is so big, and the undertow so strong, that I make sure I am with a friend as I swim back to shore. Newcomers often need to be rescued. Sometimes we emerge with red welts from stingers across our faces and limbs. I will never forget the swarms of jimbles—­small, box-­shaped jellyfish with long, trailing pink tentacles—­that inhabited the bay in the thousands for many months one year. Though we put on protective wetsuits and smeared our faces, hands, and feet with pawpaw ointment, many people still bear the scars of their stings and some even landed in hospital. But the daily difference in conditions is what makes it thrilling.

Something happens when you dive into a world where clocks don’t tick and in-­boxes don’t ping. As your arms circle, swing, and pull along the edge of a vast ocean, your mind wanders, and you open yourself to awe—­to the experience of seeing something astonishing, unfathomable, or greater than yourself. Studies have shown that awe can make us more patient and less irritable, more humble, more curious and creative—­even when just watching nature documentaries. It can ventilate and expand our concept of time: Researchers Melanie Rudd, Kathleen Vohs, and Jennifer Lynn Aaker found that “experiences of awe bring people into the present moment, and being in the present moment underlies awe’s capacity to adjust time perception, influence decisions, and make life feel more satisfying than it would otherwise.”

Research conducted by social psychologist Paul Piff and his colleagues suggests that people who regularly feel awe are more likely to be generous, helpful, altruistic, ethical, and relaxed. In one case, people who spent time staring up at towering eucalypts were more inclined to help someone who had stumbled and dropped a handful of pens than those who had not. In other words, when dwarfed by an experience, we are more likely to look to one another and care for one another and feel more connected.

It would be wrong to think of exercise only as something to build muscle and ease anxiety. If we can, we should force ourselves out of gyms and off machines and into the natural world, knowing, or hoping, that we may stumble upon awe.

Julia Baird is a journalist, broadcaster, and author based in Sydney, Australia. She is a columnist for the International New York Times and host of The Drum on ABC TV (Australia). Her writing has appeared in Newsweek, The New York Times, The Philadelphia Inquirer, The Guardian, The Washington Post, The Sydney Morning Herald, The Monthly,and Harper’s Bazaar. She has a Ph.D. in history from the University of Sydney. In 2005, Baird was a fellow at the Joan Shorenstein Center on Media, Politics and Public Policy at Harvard University.

A Memoir of Finding Joy When Your World Goes Dark 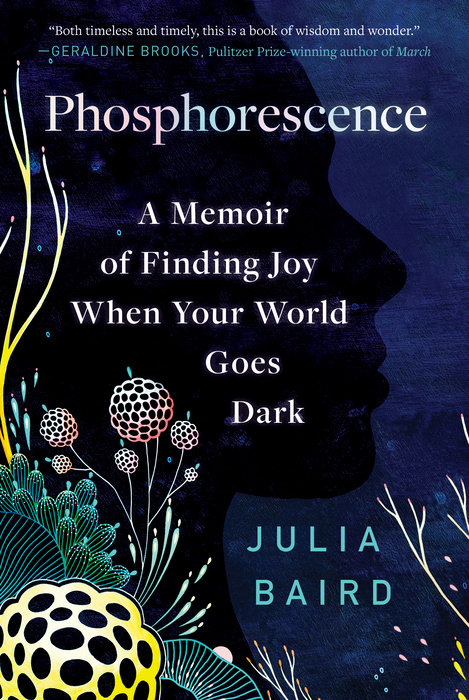