Meatless Favorites. Made with Plants. [A Plant-Based Cookbook]

“When vegan cheese queen Miyoko Schinner pens a new cookbook, you don’t walk to your nearest bookstore. You run. . . . Get ready for your weeknight dinners to never be the same.”—VegNews

From the Impossible Burger and Beyond Meat to MorningStar Farms, Boca Burgers, and more, plant-based meats are a growing trend for those who want to help the planet, animals, and their health but don’t want to give up the meaty flavors they love. In The Vegan Meat Cookbook, bestselling author Miyoko Schinner guides you through the maze of products available on store shelves and offers straightforward guidance on how to best use them in everything from Sausage Calzones with Roasted Fennel and Preserved Lemon to Hominy and Carne Asada Enchiladas with Creamy Green Sauce. Dig in to a satisfying vegan meal of Weeknight Shepherd’s Pie with Bratwurst and Buttery Potatoes or Meaty, Smoky Chili. Wow your guests with Coq au Vin, Linguine with Lemon-Garlic Scallops and Herbs, or Lettuce Wraps with Spicy Garlic Prawns.

For those interested in making their own vegan meats and cheese from scratch, there are recipes for Juicy Chicken, King Trumpet Mushroom Bacon, Easy Buffalo Mozzarella, Miyoko’s famous Unturkey, and many more that you’ll never find in stores. Whether you’re cutting back on meat for your health, the environment, animal welfare, or affordability, The Vegan Meat Cookbook will satisfy the cravings of flexitarians, vegans, vegetarians, and even carnivores.

An excerpt from The Vegan Meat Cookbook

It may seem a bit strange that I would be writing a book on meat, even if made from plants. While I’ve earned the moniker “Queen of Vegan Cheese,” my actual experience in eating meat is limited, having become a vegetarian at the age of twelve. Even before then, I had only eaten meat regularly for a few short years between the age of six, when I left Japan, and twelve, when I became a vegetarian. Prior to the year my mother and I emigrated from Japan to the United States, meat was an occasional treat. Here in the United States, however, my father made sure I got the best nutrition possible, which, to him, meant feeding me meat three times a day. I did get hooked on meat, and cheese as well—although that addiction lasted into my twenties.

When I stopped eating meat after a camping trip in middle school, kids at school would taunt me by shoving burgers in my face. It didn’t bother me—nor did it tempt me. My desire for meat had disappeared overnight, and I no longer equated it with food. Meat was now recognized as an animal, someone who wanted to live as much as I did. No more would I want to eat a steak than I would want to eat a chair. I didn’t struggle to stay vegetarian. It was easy.

However, my experience is unique. Most people don’t make such transitions easily. We are all creatures of habit and culture, as we have been throughout history. We eat what everyone else eats, and that food helps to define our identity, who we are, to which community we belong. We want to eat familiar foods, go out for pizza with friends, or dig into a basket of fried chicken with our kids. So even if your vegan daughter or best friend tells you to go vegan to save the planet or animals, it’s not often easy to do.

I was shocked to read that in 2018 meat consumption in the United States rose to an all-new high of 222 pounds per person. Americans have always eaten more meat than other populations, but the average person today consumes more than double what they did between 1900 and the 1950s (when the advent of TV dinners and fast food made eating meat not only fashionable but truly fun). Compare this statistic to many African countries where meat consumption is still less than 20 pounds per capita annually, or even in China where meat consumption has risen from 11 pounds at the turn of the twentieth century to over 130 pounds today. As meat consumption continues to soar in the United States and China, a third of Brits claim to have stopped or reduced eating meat altogether, and worldwide, according to Google, the word “vegan” is one of the top search terms. Even in the United States, over 50 percent of those polled cite an interest in reducing their meat consumption due to health, environmental, and animal welfare concerns. The center of the plate is in flux worldwide, and experts and people everywhere are discussing the future of protein. Where should it come from? Should it continue to come from animals who are “sustainably grown” and “humanely harvested,” as if using euphemisms to equate animals with plants makes it better for the animal? Or should we invest in research in newer, novel proteins, such as insects or yeast? Is it simply an issue of needing to produce enough protein—any protein—to meet the needs of the world’s exploding population? However much we try to deflect the issue by referring to it as simply a problem of protein sources, the reality is that what the world has an appetite for is meat.

We know that the planet cannot support the billions of livestock we force into the food system. We also know that it’s cruel beyond words. At the same time, we can’t forget the importance of the culture of food. We can’t expect culturally indoctrinated populations to change their habits overnight. We must find solutions to help people transition—and those solutions have to be delicious. It’s not just about nutrients, it’s about taste and culture. We must remember that food needs to comfort people, provide joy, and create community. And at this point in human history, that means finding ways to supplant meat with viable plant-based alternatives.

Entrepreneurs and businesses across the globe are addressing the problem of how we feed 10 billion people by 2050 and not destroy the planet. The problem of climate change and food security isn’t just for industry to solve; it is the business of each of us as consumers. We are actually more powerful than we realize, and our food choices can help redirect how we end up. Luckily, we are entering a time when there is exponential growth of “meat” that doesn’t come from animals. These new offerings have made it easier for the meat-loving population to take environmental advocacy into their own kitchens. By the time this book is published, another dozen or more companies will have launched “meat” made from plants, providing even more options for you to explore. In addition to the myriad burgers and nuggets out there, there will be pork, steak, fish, and even lobster made from every possible seed, legume, and grain conceivable. There might even be some of the so-called cell-based meats that reside in the murky waters of confused identity—are they vegan or vegetarian if made from animal cells? Just as the dairy aisle has changed in composition from bovine milk to almond and coconut, the meat department could look like a very different place indeed if these products succeed in migrating from the produce section or frozen aisle.

Indeed, meat alternatives or “substitutes” are nothing new. They have been around for hundreds of years in Asia where Buddhist monks developed chewy substances from wheat and soy in order satisfy those earthly cravings that didn’t go away despite hours of meditation. Go to any vegan Chinese restaurant, and you will be amazed by the multiple offerings that resemble duck, pork, beef, or even shark’s fin, most of which are utterly delectable. In Vietnam, I had “pork” that was so spectacularly juicy and tender that I couldn’t stop thinking about it all night. Even in the United States, companies such as Loma Linda have been making meat alternatives for decades. So, if that is the case, why is it only recently that the world has taken notice?

Hidden gems made from tofu or seitan at Asian restaurants may have excited an intrepid food explorer, but until recently, vegan options on grocery shelves simply weren’t sexy enough to attract more than the strictest vegetarian. But rapid advancements in food technology from stalwart companies such as Tofurky and Gardein to newer, much celebrated ones like Impossible and Beyond Meat have landed plant-based meat on the map, and the world is clamoring for more. Even Tyson, Nestlé, Maple Leaf, and other traditional meat companies have gotten into the game, launching plant-based meat alternatives and investing in cutting-edge start-ups in the space. Products that were once tucked away only in a dark corner of health food stores are now proudly displayed at major grocery chains across the country, and even fast food chains are pushing plant-based alternatives with resounding success.

Who is buying these products? Studies show that the majority of consumers of plant-based meat are not vegan nor even vegetarian, but “flexitarian,” representing the growing population of people that are trying to eat healthier by lessening the amount of animal products they consume. Other studies show that millennial and younger generations make purchasing decisions very differently from their parents and grandparents, considering the health, environmental, and ethical (both in terms of animal welfare and treatment of workers) impacts of the products they buy. With more information flooding the Internet about the disastrous environmental impacts of animal agriculture, combined with the unnecessary suffering of animals, it is no surprise that people would gravitate toward plant-based options.

However, one of the criticisms of some plant-based or vegan products is that they are too highly processed. While the traditional “meats” of Asia were relatively unprocessed (after all, monks made them in sparsely equipped kitchens with few ingredients), many of the products available today have mysterious, often unpronounceable ingredients, leaving some people questioning how truly healthy or “natural” they are. Even some strict vegans eschew plant-based meats for these reasons. In many ways, I would agree that some of the commercially available items are not the healthiest things you could put into your mouth—if you want to eat strictly for health, try kale. Or beans. Or strawberries. Or brown rice. But I would argue that they are still better than eating the cholesterol-and-hormone-laden flesh of a dead animal (at this point, there is too much science to support the unhealthfulness of animal products) and certainly satisfy a craving that one could say is good for the soul.

Miyoko Schinner is the founder of Miyoko's, the fastest-growing plant-based cheese and butter company in the country, carried in more than 29,000 retailers nationwide, plus Canada and Australia. Schinner is the author of four cookbooks, including The Homemade Vegan Pantry; cohost of the national PBS cooking show Vegan Mashup; a sought-after speaker for events and conferences; and cofounder of Rancho Compasión, an animal sanctuary that is home to over a hundred farm animals. She has been featured in Bloomberg, the New York Times, Washington Post, Los Angeles Times, HuffPost, and Food & Wine, and was named to the Forbes 50 over 50 list in 2021 as one of the country's top women who are changing the world.

Meatless Favorites. Made with Plants. [A Plant-Based Cookbook] 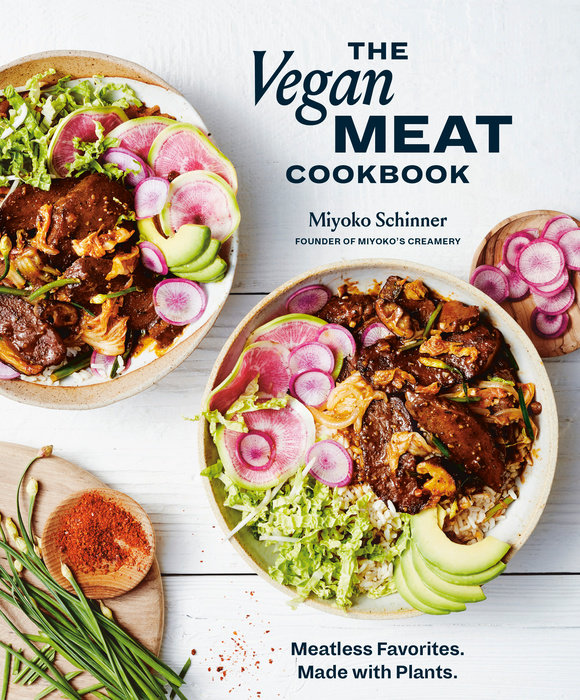