In 2008, In the Heights, a new musical from up-and-coming young artists, electrified Broadway. The show’s vibrant mix of Latin music and hip-hop captured life in Washington Heights, the Latino neighborhood in upper Manhattan. It won four Tony Awards and became an international hit, delighting audiences around the world. For the film version, director Jon M. Chu (Crazy Rich Asians) brought the story home, filming its spectacular dance numbers on location in Washington Heights. That’s where Usnavi, Nina, and their neighbors chase their dreams and ask a universal question: Where do I belong?

In the Heights: Finding Home reunites Miranda with Jeremy McCarter, co-author of Hamilton: The Revolution, and Quiara Alegría Hudes, the Pulitzer Prize–winning librettist of the Broadway musical and screenwriter of the film. They do more than trace the making of an unlikely Broadway smash and a major motion picture: They give readers an intimate look at the decades-long creative life of In the Heights.

Like Hamilton: The Revolution, the book offers untold stories, perceptive essays, and the lyrics to Miranda’s songs—complete with his funny, heartfelt annotations. It also features newly commissioned portraits and never-before-seen photos from backstage, the movie set, and productions around the world.

This is the story of characters who search for a home—and the artists who created one.

An excerpt from In the Heights

The actors took their bows, the crowd finished cheering, and everybody headed for the doors. Spotting a friend, I cut across the lobby. I asked, Did you just see what I just saw?

I had gone to the show from a certain sense of obligation. Back then, I was reviewing plays for New York magazine. Since I had argued repeatedly that musical theater needed to embrace a wider range of sounds and styles, duty compelled me to see a show that (according to the press release) was trying to supply them. The track record of such evenings was not stellar, to put it gently. But that night at 37 Arts, the Off-Broadway complex where Heights had its world premiere, I found what you always dream of finding.

Here was something vibrant and original. Two new writers, the composer/lyricist Lin-Manuel Miranda and librettist Quiara Alegría Hudes, had used their hearts, brains, and imagination to evoke life in Washington Heights, a predominan tly Latino neighborhood near the northern tip of Manhattan. They and their collaborators had created a show that was smart, moving, and skillfully staged.

In the next issue of the magazine, I heralded the show’s arrival, particularly the work of its implausibly gifted composer/lyricist. Heights had made more expansive, more sophisticated use of hip-hop than any musical that had gotten near Broadway. That would have been reason enough for a rave. But Lin also tapped into salsa and merengue—and he demonstrated an uncanny gift for writing evocative Broadway ballads. It didn’t make sense that a first-time songwriter could do so many disparate things so well. Plus he had enough charisma to play Usnavi, the bodega owner at the heart of the show.

Who was this guy?

I didn’t know. But I was happy to see his show transfer to Broadway, where it won four Tony Awards, including Best Musical. And I was glad, and not at all shocked, to see Lin’s star rise and rise (and rise and rise). After I left the magazine, Lin and I became friends, so I got to watch the ascent up close. (I saw the parabolic part, when he wrote and starred in Hamilton, from very close. We co-authored a book about the show: Hamilton: The Revolution.)

So imagine my surprise to discover, years after that night in 2007, that I hadn’t grasped the most extraordinary thing about the show after all.

The show had closed on Broadway eight years earlier, but the timing was right. Warner Bros. was turning it into a major motion picture, directed by Jon M. Chu. I liked the notion of tracing the musical’s many lives. Lin had gotten the idea for the show in college, when the prospect of it one day going to Broadway was the longest of long shots. But somehow Heights got there—and now, after many false starts and setbacks, it was making another leap to the big screen. I also liked the idea of revisiting themes and people we’d written about in our earlier book. It would be a kind of sequel, even though a lot of the action takes place before Hamilton. Like The Godfather Part II, but in a bodega.

It was only when I started doing interviews—more than fifty, by the end—that I came to see the extraordinary thing I hadn’t discerned in 2007. Again and again, people said that working on Heights felt different from other jobs. They described growing closer to colleagues on this show than on other projects—and keeping those bonds for years. It came to feel, they said, like a family.

Now, let’s be clear. I, like you, have read a celebrity profile. I have watched a morning talk show. I find people talking about “family” in show business to be just as corny and clichéd as you do. That’s why I didn’t take full account of what I heard about family in the first few interviews. But once I heard it a dozen times, then two dozen—once I heard it from people who had no connection to the original production, from actors and directors who staged the show all around the world; once I heard people who were making the movie say that the tight bond they’d forged with their colleagues was absolutely the most valuable part of the experience, even though the experience hadn’t yet ended—I started to think, Maybe there’s something here.

What’s the source of this strange adhesive power? People first felt it, and tried to explain it, twenty-two years ago. They are still trying. As this book traces the unlikely journey of In the Heights from Lin’s undergraduate brain to Broadway to Hollywood, it considers some of the ways that this musical has made people feel differently about themselves and the folks around them—how the depiction of a community can give rise to a community.

Like the Hamilton book, the story proceeds along parallel tracks. My chapters trace episodes in the development of In the Heights: first the stage version, then the film. (Though as you’ll see, the development of the stage version is a huge part of the development of the film. In order for Leslie Grace to sing “Breathe” onscreen, Mandy Gonzalez had to sing it onstage—and that could only happen after Lin had composed and rejected countless other songs that might have introduced Nina Rosario, a character that he and Quiara spent years fashioning out of their lives, dreams, and writerly imaginations. The pot is always bubbling.) Lin’s annotations to his lyrics reveal where his songs came from and what they mean to him. In many cases he is reflecting on work he did many years ago. So are his collaborators, when they’re quoted in the chapters. That long reach back through time is one of the reasons we wanted to do the book. It’s a chance to hear artists at the highest ranks of their professions contemplate what they did, and who they were, when they were still learning to fly.

One big difference between this book and the Hamilton book reflects a difference between the shows. Hamilton is sung through, so the song lyrics capture virtually every word of the script. But Heights has dialogue scenes, which Quiara wrote for the stage version, then rewrote significantly for the movie. Since it wasn’t possible to include two full scripts in the book, she wrote essays about a handful of key moments in the story. Each one traces her creative process from inspiration to stage version to screen. Think of these essays as the stitches that bind the lives of Heights together.

(The order of the songs, like the dialogue, changed between Broadway and the film version. We’ve kept the order from the stage version; the lyrics printed here follow the original Broadway cast album. But if you want to read Lin’s annotations as you watch the movie, look at the second table of contents, on page viii. It lists the songs in their movie order and will tell you where to turn next.)


One last feature of the book takes its inspiration from the show. In “Everything I Know,” Nina, the neighborhood’s wayward Stanford student, looks through a scrapbook created by Abuela Claudia, the community matriarch. By revisiting images from her past, Nina gains a new understanding of who she is and what she ought to do. Scattered throughout this book, you’ll find recuerdos, reproductions of images and objects preserved by artists involved in Heights. The word “recuerdo” captures their character more fully than any word in English. It means “memento,” but it also means “I remember.” It implies not just recollection, but tribute. The recuerdos weren’t chosen on the basis of intrinsic historical significance. They’re here because they meant something special to a member of the Heights community. In the text that accompanies the images, the artists share that meaning in their own words.

Lin-Manuel Miranda is a Pulitzer Prize, Grammy, Emmy, and Tony Award-winning songwriter, actor and director, as well as a New York Times bestselling author (Hamilton: The Revolution; Gmorning, Gnight!: Little Pep Talks for Me & You). He is the creator and original star of Broadway’s Tony-winning Hamilton and In the Heights. Additional Broadway: Freestyle Love Supreme (Co-Founder, Guest Star), Bring It On: The Musical (co-composer/co-lyricist), and West Side Story (2009 revival, Spanish translations). He is a recipient of the 2015 MacArthur Foundation Award, 2019 Portrait of a Nation Prize and 2018 Kennedy Center Honors. Mr. Miranda and The Miranda Family actively support initiatives that increase BIPOC representation in the arts and government, ensure access to women’s reproductive health, and promote resilience in Puerto Rico. He lives with his family in New York.

Quiara Alegría Hudes is the Pulitzer Prize–winning playwright of Water by the Spoonful and the author of a memoir, My Broken Language. She wrote the book for the Tony-winning Broadway musical In the Heights and later adapted it for the screen. Her notable essays include “High Tide of Heartbreak” in American Theatre magazine and “Corey Couldn’t Take It Anymore” in The Cut. As a prison reform activist, Hudes and her cousin founded Emancipated Stories, a platform where people behind bars can share one page of their life story with the world. She lives with her family in New York but frequently returns to her native Philly.

Jeremy McCarter is the co-author with Lin-Manuel Miranda of the #1 New York Times bestseller Hamilton: The Revolution. He has written about culture and politics for New York, Newsweek, The New York Times, and Buzzfeed. He spent five years on the artistic staff of the Public Theater in New York. He studied history at Harvard and lives in Chicago. 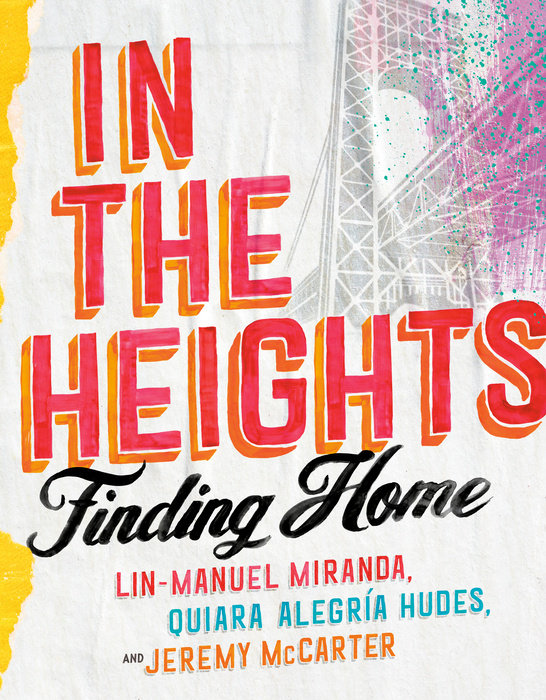