The long-awaited war has come in the sweeping conclusion to the Lot Lands trilogy—another irresistibly swashbuckling, swaggering, foul-mouthed fantasy from the author of The Grey Bastards.

“[A] rip-roaring, shelf-bending conclusion . . . nothing short of an adventure fantasy masterwork.”—Kirkus Reviews (Best Books of the Year)

War has come to the Lot Lands—and Oats stands upon the frontline.

The Hisparthan armies on the horizon are mighty, bolstered by divine champions, dread sorcerers, and gunpowder. It’s almost more than the half-orc rebellion can hope to repel.

But Oats has won impossible fights before. He’s a thriceblood, after all, more orc than man. And he hasn’t forgotten how to kill. He’ll stack the bodies high for his chief and his brethren, if that’s the price of freeing the Lots from human tyranny.

Besides, the invading forces are getting a damned sight more than they bargained for. They’re not facing a handful of half-orc hoofs, but a true army—one forged from all the peoples of the Lots. At its head are Fetching, in full command of the ruinous power that runs through her veins, and Jackal, armed with the blessings of a dead god.

Yet Oats can’t help but find his faith wavering. Once the strongest Bastard, he soon realizes that in this battle, even the strength of a thriceblood is easily conquered. And after a grievous loss strikes, he begins to fear that this war will lead the Lots not to freedom but to ruin.

So when another path to peace beckons, he has no choice but to walk it. Even if it means betting the Lots’ fate, and his own, on the promises of the Bastards’ wiliest adversary—and making a perilous journey into the heart of Hispartha itself.

Brimming with all the epic battles, surprising sorcery, and fiendish twists a Bastards fan could wish for, alongside unforgettable moments for characters old and new, The Free Bastards builds a new future for the Lots—even as it gives our beloved trio of Jackal, Fetching, and Oats the rousing, blood-soaked sendoff they deserve.

An excerpt from The Free Bastards

There were times Oats itched to shave his beard.

Never mind that he’d begun to grow the damn thing the year before he became a slophead. Never mind that without it he’d look a damn full-­blood orc, all huge and hairless and near black. Never mind that he liked the way it thrust from his jaw, a challenge without words. There were still times he wished it wasn’t there. Vomiting, for an instance. Never want a beard when your guts are fountaining out of your mouth, especially if there’s bits. Licking quim sometimes too. Trying to provide a woman a sure path to spending but she keeps giggling on account of chin thatch tickling her thighs, that’s a frustration.

Sure as shit, there were times in life Oats wished he’d taken a razor to his face the day before.

Right now—­a dying man’s gauntleted fingers tangled in his whiskers—­was one of them.

To be fair, Oats had hold of the frail too, hand clamped over his mouth to keep him from making a noise. Or breathing at all. Still, he wasn’t going all that quietly. He kept struggling.

The stinging hairs, snarled in the segmented metal of the gauntlet, were more irritating than a kick in the cods. The strongest frail would have been hard-­pressed to move Oats, but his beard wasn’t made of muscle. He was forced to give, leaning into the man’s pull, or else allow a denuded patch to adorn his jaw. He’d fallen victim to this strategy before, at the pink hands of a little girl on Fetch’s shoulders during a game. Never suspected a full-­grown fighting man to try it, even as his last act. He dragged the man close, encircling the entire helmeted head in his arms, and wrenched it around until the bones crunched. Always a weird thing, breaking a neck. Oats was never sure if that grinding was something he heard or felt. Either way, it was f***ing unpleasant. Made him a bit sick, every time.

Not enough to vomit, thankfully.

Two backward steps brought the new-­made corpse into the deep shadows beneath a high arch set into the side of the temple. Careful not to look up at the statue looming within, nor dwell on whatever judgmental god it depicted, Oats deposited the body behind the plinth and crept from the arch, giving the shrouded glare of the statue his back. He went across the alley, preferring the shadows cast by the portico of the adjacent house to the darksome embrace of the temple.

Oats hated temples. Hated their spires, all barnacled with hideous adornments. Hated the walls, all carved with images of leering devils and dwarfed people. Built like castles, they defended nothing but their own creepy mysteries. Well, that wasn’t entirely earnest. Their bell towers were well suited to rousing armed men, should a murdering half-­orc get himself spotted by a sleepless priest.

But that’s what a mongrel faced when leaving the Lots. That was the risk taken when setting foot in Hispartha.

Ellerina’s cobbled square sprawled at the feet of the temple, silent and empty. None had seen Oats nearly make a pig’s ear of killing the guard. He waited, watched, listened, rubbed at the sore skin beneath his beard. A day ago this town had been nothing to him but a map traced in the dust. The house sheltering him had been a rock. One of Jacintho’s daggers thrust into the ground served as the temple, a cup for the well at the center of the square. As the stillness drew on, Oats hoped the other frails on watch were dying quickly and unnoticed. No cry had yet broken the night. Likely all was done. Jacintho and his cutthroats weren’t in the habit of fumbling a murder. Or twelve.

The wind kicked up again, enough chill in its breath to make Oats grit his teeth. Winter was dying, spiteful in its final days. Down in the Lots it rarely found much of a grip, contenting itself with spitting rain over the mountains. But here, on the north side of the Umbers, the cold could find a foothold when the sun went down. Oats worried it would keep the guards alert, though his man hadn’t exactly been a hawk, the beard-­yanking f***.

The wait stretched on. Oats could feel himself getting nervy. He clenched his hands, resisting the urge to crack his knuckles. He couldn’t wager how long he’d been lingering. Time was nothing but a queer stretched instant between the plan going right and going to shit.

Then he saw the sparks. Tiny motes of brightness across the square, birthed in the shadows between the farrier’s shop and the . . . the . . .

Oats couldn’t recall what the structure was. It had been a lemon rind on the dirt map. Anyway, the signal was appearing right where it was supposed to, the sparks bursting to life and dying just as they began to fall. Oats surveyed the square one last time before hurrying across its exposed width.

Jacintho melded further with the darkness when he arrived, tucking the measure of flint he’d used to strike the sparks back into his rags, but not the knife. Oats wedged himself into the alley next to the man. They did not speak. There was no need. The sentries were dead, their bodies hidden. The easy part of the plan.

Jacintho made for the alley’s opposite end, pausing for a heartbeat at the mouth before creeping into the street. Oats stayed on the rangy frail’s heels, feeling every bit the lummox. Simple to convince himself he was deft at sneaking when alone. Towering over a scrawny little weasel like Jacintho made Oats feel as furtive as a fart­ing bull f***ing a sack full of empty wine jugs. Still, the town remained undisturbed by their presence.

Ellerina was the largest settlement Oats had ever set foot in that wasn’t a ruin. Jacintho was confident in their path, however, despite only having part of a day to scout the place. He’d dressed as some kind of wayward penitent, barefoot and clad in sackcloth, a guise he still wore. Odd to see him without his ugly flop of a hat, held together by more filth than cloth. His lank, greasy hair was tied into a tail that fell near to his ass, a lure that pulled Oats along through the murk of sleeping streets and reeking alleyways.

They came to the broken stirrup. That’s what Jacintho had used to represent the place. In truth, it was a square two-­story building of stone. A small arched portal set with a door of iron-­studded wood was the only entrance. Jacintho had not been able to gain access. The only way in would have been at the rough invitation of Ellerina’s bailiffs. And such an entrance would have made it damn unlikely he would ever come out again. So he’d resorted to idle gossip among the most loose-­lipped sots of the tavernas. Their wine-­soaked tongues had confirmed this was the spot.

Getting in without bringing the entire militia down upon them hampered their planning.

Until Jacintho had placed a small sack down on the miniature rendering of the town and said, “They also have a powder mill.”

The broken stirrup was near Ellerina’s center. The sack of blackpowder rested close to the scratched line denoting its western wall.

And it was from the west of town that the explosion now thundered, the sky flaring over the rooftops. Dogs began barking, disturbed babes wailing. Ellerina woke, her people’s dreams blasted apart. The powder mill’s stores were brimming, Jacintho had said, and Oats now heard the evidence. Felt it too. The building next to him rattled, render falling away from the bricks as the distant barrels continued to burst in an unsteady rhythm of startling concussions.

Hoping the explosions would mask the coming ruckus, Oats sprinted from the alley, charged the door to the fortified building, and bashed it open with his shoulder. He broke the beam barring the door . . . as well as the man behind it.

Oats hadn’t known he was there. Perhaps he’d a mind to come out and see what the commotion was. Piss luck for that frail. He lay unmoving beneath the shattered wood. Oats stepped over, wasting no time to see if he still breathed. Jacintho would see to it he wasn’t for long. Oats was more concerned with the man who appeared in the arch to the right, rushing into the cramped entry room, mace in hand. His steps stuttered when he saw Oats, the creases of determination in his ruddy face smoothing with the slack of sudden fear.

Men often needed a moment to put a fresh tally on their courage after setting eyes on Oats, he’d found.

This one came up short. He halted, spun to flee.

Jonathan French lives in Atlanta with his wife and son. He is a devoted reader of comic books, an expert thrower of oddly shaped dice, and a serial con attendee. 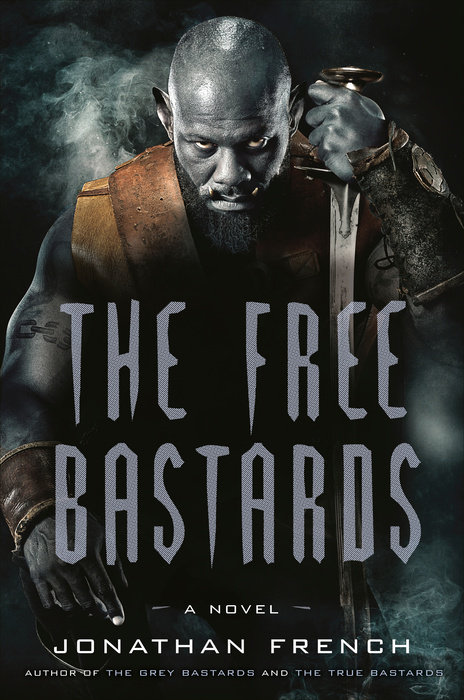