From the #1 New York Times bestselling author of One Day in December . . . When a double-booking at a remote one-room cabin accidentally throws two solace seekers together, it feels like a cruel twist of fate. But what if it’s fate of a different kind?

“A perfectly executed and quintessential romantic comedy.”—Christina Lauren, author of The Unhoneymooners

ONE OF THE MOST ANTICIPATED BOOKS OF 2022—PopSugar

Spending her thirtieth birthday alone is not what dating columnist Cleo Wilder wanted, but she plans a solo retreat―at the insistence of her boss―in the name of re-energizing herself and adding a new perspective to her column. The remote Irish island she’s booked is a far cry from London, but at least it’s a chance to hunker down in a luxury cabin and indulge in some self-care while she figures out the next steps in her love life and her career.

Mack Sullivan is also looking forward to some time to himself. With his life in Boston deteriorating in ways he can’t bring himself to acknowledge, his soul-searching has brought him to the same Irish island to explore his roots and find some clarity. Unfortunately, a mix-up with the bookings means both have reserved the same one-room hideaway on exactly the same dates.

Instantly at odds, Cleo and Mack don’t know how they’re going to manage until the next weekly ferry arrives. But as the days go by, they no longer seem to mind each other’s company quite as much as they thought they would.

Written with Josie Silver’s signature charm, One Night on the Island explores the meaning of home, the joys of escape, and how the things we think we want are never the things we really need.

An excerpt from One Night on the Island

You genuinely want to send me to a remote island to marry myself?”

A warm flush creeps up my neck as I sit across the desk from Ali, my terrifyingly enigmatic boss at Women Today. She’s asked me to do some fairly out-there things over the years, but this one tops the lot.

“It’s not legally binding,” she says, as if that makes it better.

“Look.” I pinch the bridge of my nose, choosing my words carefully. “It’s one thing for an A-lister to declare she’s ‘self-coupling’ for an interview in Vogue, Ali. It’s altogether different for an almost thirty-year-old dating columnist to claim she’s doing it too.”

I stumble as I say my age; the number sticks like glue in my mouth. Thirty felt like just another year until I was twenty-nine and three-quarters, but now that my landmark birthday is a few weeks away, I’ve started to experience all kinds of unexpected and unwelcome anxieties. I was, I am, determined not to be someone who makes a big drama out of it, but with every passing day it’s as if someone adds an extra weight onto my shoulders—one of those mini cast-iron ones you see in old-fashioned kitchen scales. I’m disappearing under tiny, invisible kitchen weights, and Ali has noticed my diminishment because Ali notices everything. She didn’t get to be the editor of one of the UK’s leading online women’s lifestyle magazines by resting on her laurels; her meteoric rise is well documented in the industry with both green-eyed envy and huge respect. I consider myself lucky to work for her; I’d even go so far as to count her as a friend. A laser-eyed, ball-of-energy friend who terrifies me and makes me do things I don’t want to, such as decamping to a remote Irish island I’ve never heard of to marry myself.

“Honestly, Clee, I came across that old Emma Watson interview again over the weekend and all I could think about was you.” She gets up from her chair to pace, too excited by her own idea to sit. “A string of dating failures and disasters, about to turn thirty”—she ticks the list off on her fingers as she speaks—“trying to define her place in the world as a single woman, pressured by the media and the expectations of others.”

“I feel sick with sorrow for her, I really do,” I say. “It must be a shocker having to snog R-Patz for a living.” He made a lasting impression on teenage me—all that immortal glittering. Is it any wonder I’ve struggled to find love after being set such unrealistic expectations? There’s a whole other column for another day.

“She’s never had to snog R-Patz. Don’t minimize Emma’s contribution to make yourself feel better, you know I’m onto something here.”

I pick at a loose thread on the arm of the office chair. “It’s not strictly fair to say I’ve had a string of dating disasters. It is my job.”

“I know, I know. We pay you to swipe right and wear your big, beautiful heart on your sleeve. We love you for your optimism and your faith in finding your flamingo.”

Finding My Flamingo is the name of my online column, so called because flamingos mate for life. We experimented with other animals that mate for life too, but Finding My Gibbon suggested red bums and picking each other’s ears, and Finding My Beaver lowered the tone in a most unstylish way. Finding My Flamingo felt appropriate, but as time has gone on I’ve become somewhat less invested, in no small part because I’ve been gifted so much flamingo-related shite that I could open a flamingo-related shite shop.

“Look, Clee, you need to do something to mark turning thirty. It’s a seismic moment in a woman’s life.” Ali pauses in that specific way she does when something bad is coming next. “It’s this or the tattoo.”

I sigh; I really should have seen that coming. The tattoo has become a bit of an in-joke at team meetings. Any time I’m struggling for column content, someone gives me the side-eye and then suggests I get a flamingo inked indelibly on my skin, preferably in a place it can’t easily be concealed.

“Okay. Look, I always kind of liked what Emma said about self-coupling,” I say cautiously. “I get it. She was saying she’s enough already, alone but not lonely.”

Ali nods. She doesn’t interrupt me; I know she’s hoping I’m going to talk myself into it. She’s excellent at deploying silence to get what she wants.

“She’s a vibrant, independent woman who understands that there’s more than one way to achieve a fulfilled life,” I say. “She isn’t a failure because she doesn’t have a partner and a bunch of kids, and she doesn’t let the fact that both of her sisters and her brother are married with their own broods pressure her, or feel forced to defend her singledom at every family gathering, even if she is drowning in an ocean of wedding and baby shower invitations—I mean, I’m genuinely happy for them all, but do they really need to wave it in my face in gold italics, for God’s sake?”

I stop, realizing my voice has grown loud and somewhere in there I’d switched from talking about Emma Watson to talking about myself. Besides, it was unfair of me to include my brother, Tom, in my list of grievances—he’s the only member of my family who never mentions my waning egg supply or lack of a significant other. Of my three siblings, he’s furthest in age from me, seven years to be precise, yet we’re closest in every other way. It’d be easy to cast him as a father figure in my life, given that I was a baby when our father died, but Tom was the one slipping teenage me an illicit cigarette under the table and covering for me when I stayed out late at night. We both take after my dad, apparently, dark hair and eyes full of trouble, if Mum is to be believed.

Ali sits back down, absolutely unfazed by my speech, her fingers steepled in a way that suggests she’s either thinking or praying. “Exactly my point,” she finally says. “This is the perfect opportunity to get away from the pressure of the huge surprise party your family is planning for your birthday, a valid reason to politely duck out of any impending weddings and baby showers, and the chance to catch your breath for the first time in three years.”

“My family is planning a surprise party?”

Ali nods. “Your mum emailed me last week to check if you’d be able to take some time off and to ask for a list of all of your ‘London friends.’ I use air quotes because she used actual quotes. She also mentioned looking up your old schoolmates on Facebook. Old boyfriends. Your funeral without you dying, basically.”

My fingers itch to text Tom for the lowdown. I love my family dearly, but surely they know me well enough to know that the ghosts of my past jumping out at me in a darkened room would be my personal hell? I’d rather get that flamingo tattoo. On my face.

“So basically, it’s a huge birthday party, or I accept your proposal that I self-couple alone on a remote island no one’s ever heard of off the Irish coast,” I say, summarizing the meeting.

“Salvation Island,” Ali says. Her satisfied expression tells me how pleased she is by the serendipitous name of the aforementioned remote island. She probably changed it herself by petition, or whatever it is you have to do to change the name of an island. It’s the kind of stunt she’d pull if she thought it would boost readership.

“All expenses paid,” she adds, as if that’s going to be the clincher.

“Not all expenses paid, no.”

Ali’s face contorts with the effort of trying to turn a grimace into a smile. “Come on now. Who ever wrote their best work under a beach umbrella? Think inspirational log fires and steaming cups of ambition.”

“You totally stole that line from Dolly Parton,” I grouch, not at all happy with the situation.

Ali’s eyes gleam. “No nine-to-five on Salvation Island,” she says, slowly reeling me in.

I weigh up my options. Just thinking about turning thirty spikes my anxiety levels again; marking it with a huge party surrounded by people I no longer know, who will no doubt be sporting wedding bands like medals, has my heart reaching for its suitcase.

“I do love Ireland,” I say quietly, feeling Ali’s web closing around me. As it was always going to.

Josie Silver is an unashamed romantic who met her husband when she stepped on his foot on his twenty-first birthday. She lives with him, their two young sons, and their cats in a little town in England called Wolverhampton. She is the #1 New York Times bestselling author of One Day in December and The Two Lives of Lydia Bird. 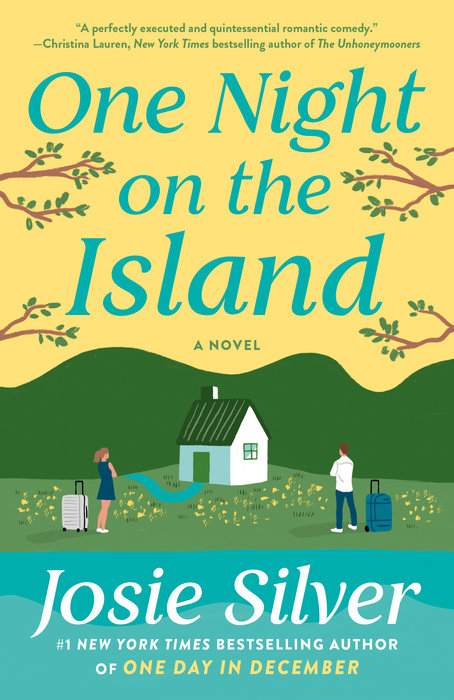