An impossible crime. A detective on the edge of madness. The future of time travel at stake. From the author of The Warehouse . . .

ONE OF THE BEST BOOKS OF THE YEAR: NPR, Kirkus Reviews

Not that running security at the Paradox was ever really easy. Nothing’s simple at a hotel where the ultra-wealthy tourists arrive costumed for a dozen different time periods, all eagerly waiting to catch their “flights” to the past.

Or where proximity to the timeport makes the clocks run backward on occasion—and, rumor has it, allows ghosts to stroll the halls.

On top of that, some very important new guests have just checked in. Because the U.S. government is about to privatize time-travel technology—and the world’s most powerful people are on hand to stake their claims.

January is sure the timing isn’t a coincidence. Neither are those “accidents” that start stalking their bidders.

There’s a reason January can glimpse what others can’t. A reason why she’s the only one who can catch a killer who’s operating invisibly and in plain sight, all at once.

But her ability is also destroying her grip on reality—and as her past, present, and future collide, she finds herself confronting not just the hotel’s dark secrets but her own.

At once a dazzlingly time-twisting murder mystery and a story about grief, memory, and what it means to—literally—come face-to-face with our ghosts, The Paradox Hotel is another unforgettable speculative thrill ride from acclaimed author Rob Hart.

An excerpt from The Paradox Hotel

Droplets of blood pat the blue carpet, turning from red to black as they soak into the fibers. The drops come slow at first, before turning to a trickle as the bones of my skull squeeze like a hand around my brain. My body yearns to release the tension in my shoulders, to let the pressure off my knees, to lay down and go to sleep.

Except it won’t be sleep.

It won’t really be death either. Something more in-between.

This moment has been chasing me for years. The third stage, when the strands of my perception unravel and my ability to grasp the concept of linear time is lost.

More pats on the carpet. But the blood from my nose has stopped flowing.

Heavier, from the other end of the hallway, getting closer. Footsteps.

Maybe I can fight this. A handful of Retronim. A cherry lollipop. What if I scream? I open my mouth. Nothing comes out but blood.

The footsteps get closer.

This is the moment when my brain will short-circuit. That’s the third stage of being Unstuck. No one really knows why it happens. The prevailing theory is your mind finds itself in a quantum state and can’t handle the load. Others think you witness the moment of your death. I don’t give a shit about the “why” of it. I just know the result doesn’t look pleasant: a glassy-eyed coma that’ll last as long as my body holds out.

In a moment I’ll be gone. Probably reality too. The timestream is broken and I’m the only one who can fix it, but instead I’m dying on the floor. Sorry, universe.

I slip again, memories rattling around my brain like rocks in a tin can. Sitting in my bed, the smell of garlic and chili paste frying in the kitchen, wafting upstairs. Graduating the academy, walking across the gymnasium stage, new heels tearing at the skin of my feet while I scan the sea of folding chairs.

The first time I let Mena kiss me, the two of us alone on the balcony overlooking the lobby.

That taste of cherries, and everything I ever needed.

I feel it, the displacement of air, the gravity of another person, standing there, watching me writhe on this dumb blue carpet. Nothing I can do now. It’s over. But I’m not going to die on my hands and knees.

Doctor Tamworth is holding his pen an inch above the flat expanse of his desk, looking at me like I might bite him. Which, the day is young.

I take a second to situate myself. The fluorescent light is so white it’s almost blue, to match the sky-blue walls and dark blue linoleum tile. So much of this place is blue, which is calming, or so I’ve been told. The room is otherwise bare, save a small tablet on the desk, a diploma on the wall from a university in his home country of Bangladesh, and a half-eaten deli sandwich in a cardboard clamshell container. I can smell the sting of the vinegar, the funk of the cheese. My stomach growls at it. Ruby is hovering in its usual spot over my shoulder, too close by half.

“Where were you just now, January?” Tamworth asks.

“Right here, Doc,” I tell him, which is only mostly a lie, because the place I slipped to is gone. Something about carpet? I reach for it, but it disappears between my fingers like smoke. Probably not important.

“It didn’t look like you were here,” Tamworth says, his voice an airy, nasal pitch that seems determined to match the creak of his desk chair. “It looked like you were somewhere else.”

“Your word against mine.”

He heaves his blocky frame to a standing position and turns to the
cabinet. The rattle of the pill bottle lifts my soul. He places the orange tube of Retronim on the desk, just next to the sandwich.

“I’m increasing your dose,” he says. “Ten milligrams. One pill in the morning, one at night. If you’re slipping a lot you can take a third, but no more than that in a twenty-four-hour period. Your weight.” He raises his hand, spreads his fingers, waves them back and forth. “Figure by the time we get to twenty milligrams in a day, there might be a problem.”

“What kind of problem?”

He frowns. “Heart palpitations, confusion, hallucinations. Not to mention your kidneys won’t be too happy.”

“Got it,” I tell him, nearly snatching the sandwich, but instead palming the bottle and stuffing it in my pocket. “Take as needed. Like candy.”

His face goes dark. “Do you ever get tired of this?”

I offer him a shrug in response.

“Your latest round of scans came in. Let me show you something.”

He reaches for the tablet, opens it, and tilts it toward me. The mushy oval on the screen is lit up in greens and blues and reds. “This is the brain of a woman your age who has never stepped foot in the timestream.” Then he swipes, showing another scan with slightly less color around the center of the mass. “This is your brain. Do you see the difference?”

“There’s clear degradation in the hypothalamus. We’re still not sure exactly how this works, but we believe the problem is related to the suprachiasmatic nucleus, which regulates the body’s circadian rhythms . . .”

I put up my hand. “Doc, don’t tell me you don’t know how this works, and then tell me you know what’s wrong. I told you. I’m still on the first stage.”

He taps the screen of the tablet with his pen. “Nobody with this much loss of function . . .”

“Except you don’t know how this works, so how do you even form a benchmark?”

He stops and stutters. “January, I’m doing this for your own good.”

He slaps the tablet on the desk. “Retronim isn’t a cure. All it does is forestall the inevitable. I have serious concerns about you being here. I know it’s supposed to be safe, but look at the clocks. There’s clearly radiation leakage. You ought to be somewhere far away. Why not retire? You hit your tier. Find a beach community. Read books. Meet someone.”

I put my hands flat on the desk and lean forward, taking time to enunciate each word: “Don’t tell me what I need.”

“If you’re on to the second stage of this, you know what that means,” he says, pleading.

“Really? Because it doesn’t seem that way.” Tamworth peers over my shoulder. “What’s your take on this?”

Ruby whirs a little closer. I consider whacking it against the wall. Not for any particular reason, just because I consider that a lot. It gives a soft beep and, in its genteel New Zealand accent, says, “Nothing worth reporting, Doctor Tamworth.”

Tamworth rolls his eyes. I don’t have a good insult, nor do I care to formulate one, so I stand and pat the pill bottle in my pocket. It gives another optimistic shake. “Thanks for the lift, Doc. I’ll see you around.” I wave to the drone hovering at my shoulder. “Let’s blow, Ruby.”

He looks at me again, ready to say something deeply caring and meaningful, probably. Then he thinks better of it.

As I leave, I realize I could have handled that better.

Could have taken the sandwich.

I should feel bad. It’s not like he’s not wrong. I shouldn’t be here. But how could I be anywhere else?

Rob Hart is the author of The Warehouse and the Ash McKenna crime series, and he co-wrote Scott Free with James Patterson. He’s worked as a book publisher, a reporter, a political communications director, and a commissioner for the city of New York. He lives on Staten Island. 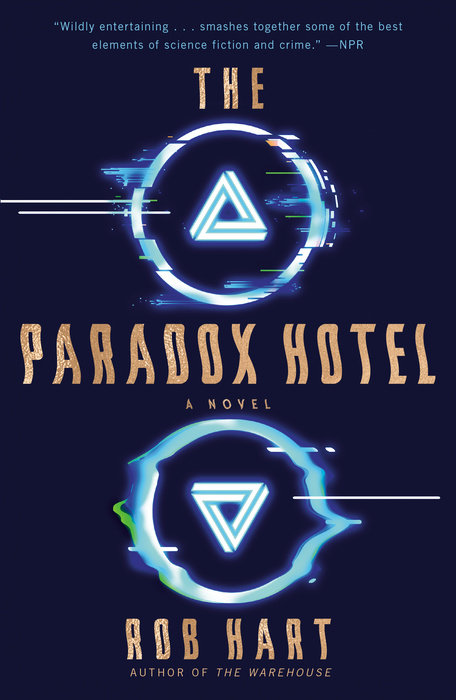