A Guide to Building a Home for Your Soul

From the celebrated poet, speaker, and educator comes Welcome Home, a powerful blueprint for building a strong foundation of self-worth, belonging, and happiness.

“A master class in self-actualization and compassion.”—Mari Andrew, New York Times bestselling author of Am I There Yet?

The powerful metaphor of home provides a structure for you to customize your journey to personal transformation as Najwa Zebian shares her own experiences in building a home within herself, and shows you how to construct the following “rooms”:

• Self-Love: Learn how to build an individualized self-care routine to reflect your daily needs.
• Forgiveness: Learn how to allow yourself time, reflection, and space to accept and let go of painful events.
• Compassion: Discover the three different types of compassion and learn how you can let people in while maintaining boundaries.
• Clarity: Learn how to remove the walls you put up around your authentic self.
• Surrender: Learn how to lower your defenses and give yourself space to feel and process your emotions.
• The Dream Garden: Learn how to nurture your dreams and create an authentic, original path.

With practical tools, poetry, and prompts for journaling and meditation to lead to self-understanding in each chapter, Zebian shows you how to build each room in your house. Written with her trademark power, candor, and warmth, Welcome Home is an answer to the pain we all experience when we don't feel at peace with ourselves.

An excerpt from Welcome Home

It was a Monday morning.

I woke up to a message that said “Can I call you?” This was a little unusual for Noah to ask, because we usually planned our calls days in advance. It didn’t sit right with me, but since we’d been texting a lot more recently, I decided a phone call was a natural progression. So I answered “Of course!” I jumped out of bed, threw my hair up in a bun, and sat at the island in my kitchen, where I spend much of my time writing.

He called me on his way to work. We talked about his job for a little bit. We laughed a lot. I don’t remember why. But I was always very giddy with him on the phone. I liked to make him laugh, even if it meant making a fool of myself.

As we chatted about random life things, something in my heart said This can’t be it. He’s calling to tell me something.

Does he want to find out when he can see me next? Does he want to start opening up more? Does he miss me? No . . . that can’t be it. He’s so emotionally independent. He would never admit that even if it were true.

But another voice, one that I’d been working so hard on listening to, said He just wants to talk to you. Relax. You deserve to have someone call you out of the blue just because he wants to hear your voice.

I listened to that voice this time. It was the same voice I’d listened to a few days earlier when I pushed myself out of my comfort zone and started speaking to him in a more complimentary tone. He wasn’t reciprocating every single time, but he was happy to receive the compliments. And at that point, that’s all that mattered to me. He was trying to overcome a toxic past, and for him to accept a compliment was a huge step.

I felt happy someone had accepted my praise.

That inner voice took me so far past my comfort zone that I surprised myself. I wasn’t used to telling someone how much I wished I could see them. That thought alone—to tell someone I wished I were in their presence—made me blush uncontrollably. I somehow felt ashamed for expressing that . . . for wanting that . . . for admitting that.

You see, in my culture, talking about feelings and romance is taboo. It’s only for the movies and TV shows. It’s like, as a child, you could watch these shows, but you had to know what happened in them couldn’t happen in real life. It was a kind of cognitive dissonance. That happens and it’s okay for others to experience it, but if I did it, I would be in trouble.

At least that’s how I grew up in a tiny village in Lebanon. Everyone was of the Muslim faith—on paper. The mosque was right across from my house. And I grew up with a heavy religious education. That education drew hard lines between girls and boys, men and women. As a child, this is how I saw relationships: One day your knight in shining armor sees you, somehow, even though you’re hidden. He says he’s in love with you and wants to marry you. And, boom. You live happily ever after.

Ironically, way at the other end of the world—the part of the world where I’d eventually learn how misguided that notion of relationships is—Disney movies taught girls the same thing. I now know this is a narrative springing from misogyny and patriarchy—which unfortunately know no borders—rather than specific religions or cultures. I could write books about this, but let’s get back to the voice I was talking about.

So I told him how excited I was to see him. Because he was so busy with work, we had decided to meet in a month’s time. But that voice had told me a few days before this call that if I wanted to see him sooner, I should just let him know. So I did so in a text message.

At the first moment of awkward silence in our phone call, I said: “I know I may have been saying things you’re not fully ready to hear, but I hope hearing them reminds you of how valuable you are.” Those things I’d said were innocent compliments and affirmations.

Let me freeze this moment for you and explain exactly how I felt: I was shocked. But at the same time, I really wasn’t. I knew this moment was coming. I wasn’t actually happy with our dynamic. I knew I wasn’t happy. In retrospect, I confused the happiness being vulnerable and speaking my mind gave me with him making me happy. But his lack of reciprocation always left me feeling confused. Getting emotion or attention from him was like running a race with the illusion there was a finish line. So you keep running, and the finish line keeps moving farther and farther away from you. Against all the odds of how I thought I would respond, I actually fell quiet. I could feel my body shrink and curve. My oversized sweater felt like the closest thing to a hug I could get during this moment, which felt like it would never end. How could it end when I hadn’t even seen it starting? Of course this would happen to me. No one wants to be with me.

In this moment of silence, he said: “See, the last few days have been way too intense. I’m not ready for something like this.”

Way too intense? I thought. We were just TEXTING!

I immediately jumped into defense mode and said: “But you said you were happy.”

“I did say that. And I was happy. But it just made me realize that I’m not ready. It’s too soon. I’m still dealing with a lot of things from my past, and I have to resolve them on my own.”

So the answer was simple. I said: “Okay, I won’t talk to you like that anymore. I’m sorry.”

But there was that other voice again: I moved too fast. I said things I shouldn’t have said. Maybe if I had waited a little bit longer, things would have been different. This is my fault.

“I think you’re in too deep, and it wouldn’t be fair to you to ask you to take a step back. So I think for now the best thing is that we don’t talk anymore.”

“At all. I know you don’t want to hear this, but I’m not going to change my mind. I know this hurts, but that’s what I want.”

As I attempt to describe this pain, words crumble before they can be written on paper. It felt like someone had walked me all the way up to the top of a mountain and pushed me off with all their force. At the same time, I felt numb. Perhaps it was denial. Shock. Disbelief. Or maybe the pain was so deep I couldn’t feel its intensity anymore. I felt a tingling sensation all over my body. Like
I wanted to cry, but I couldn’t cry. I wanted to yell, but I couldn’t yell. I guess what I really wanted was to change this ending. But I couldn’t.

This was the end of the fight.

I felt so helpless.

How do you continue to fight when there's no one but you on the battleground? How do you fight when someone has already raised your white flag for you? How do you say goodbye to someone who’s already gone? Who’s already left and is just informing you of their departure after they’ve reached their destination?

The rest of the phone call was a blur.

I took a business meeting immediately afterward, so I had no time to cry. When it ended, I jumped on a call with my business partner at the time and braved through it. But near the end of the call, he asked: “Are you okay?”

Honestly, back then, I resented this part of myself. It’s so readily apparent when I’m struggling. You can hear it in my voice. You can see it in my eyes. It’s so obvious. I mean, this person on the phone with me sensed something was wrong. The first thing I thought was Ugh! I hate that I can’t even hide how I’m feeling over the phone.

I said: “Honestly, I’m not okay.” And that’s when I broke down in tears. I told him what happened.
“I don’t understand why this always happens to me . . . it hurts so much . . . my heart actually hurts. I’m going to need to take some time off. I can’t focus on the work we agreed on.”

He was so kind, and he gave me so much input that, at the time, seemed to go in one ear and out the other. My whole being was preoccupied with this pain. This was bigger than Noah. It quickly spiraled into overblown feelings of abandonment, neglect, and worthlessness.

It was the weirdest thing ever. I said to myself Why are people always so okay with not having me in their lives?

NAJWA ZEBIAN is a Lebanese Canadian activist, author, speaker, and educator. The author of three collections of poetry, she delivered the TEDx talk "Finding Home Through Poetry" and recently launched a digital school, Soul Academy, and a podcast, Stories of the Soul. Her work has been featured in the New York Times, Glamour, Elle Canada, HuffPost, and more.

A Guide to Building a Home for Your Soul 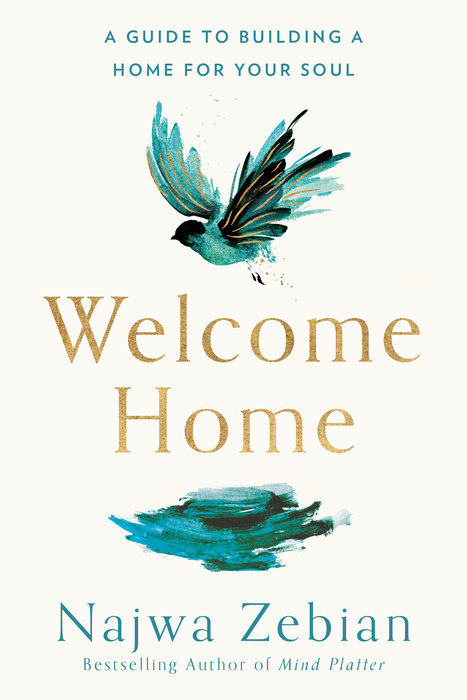