Daniel Pitt’s investigation into his colleague’s murder leads him through London’s teeming underbelly to the suspicious dealings of one of England’s most influential shipbuilding magnates in a thrilling novel from New York Times bestselling author Anne Perry.

“Timely . . . and engaging . . . another terrific mystery.”—Bookreporter

When junior barrister Daniel Pitt is summoned to the scene of a murder in the London district known as Mile End, he knows only that the victim is a senior barrister from the same firm. To Daniel’s relief, it is not his close friend Toby Kitteridge, but the question remains: What was this respected colleague doing in such a rough part of the city? The firm’s head, Marcus fford Croft, may know more than he admits, but fford Croft’s memory is not what it used to be, and his daughter, Miriam—Daniel’s sometime sidekick—isn’t in the country to offer her usual help. And so Daniel and Toby must investigate on their own, lest the police uncover something that may cast a suspicious light on the firm.

Their inquiries in Mile End lead them to a local brothel and to an opium den, but also—unexpectedly—to a wealthy shipbuilder crucial to Britain’s effort to build up its fleet, which may soon face the fearsome naval might of Germany. Daniel finds his path blocked by officials at every turn, his investigation so unwelcome that even his father, Special Branch head Thomas Pitt, receives a chilling warning from a powerful source. Suddenly, not just Daniel but his whole family—including his beloved mother, Charlotte—is in danger. Will Daniel’s devotion to justice be the undoing of his entire life, and endanger Britain’s defense at sea? As ever, the fates of family and history are inextricably intertwined in this spellbinder from Anne Perry.

An excerpt from Death with a Double Edge

Daniel was worried. Toby Kitteridge was almost an hour late, which was extremely uncharacteristic of him. He was untidy, no matter how hard he tried not to be. His hair never lay flat. He found it difficult to buy a shirt whose sleeves were long enough to cover his bony wrists, and occasionally he wore odd socks without noticing it. But he was meticulous about time. He was never late. He considered it to be not only rude, but incompetent, a fatal flaw in a lawyer.

Daniel looked at the office clock. It said eight minutes before ten.

There were two light taps on the door. He knew who it was: Impney, the chief clerk at the legal chambers of fford Croft and Gibson.

Impney entered and closed the door behind him. Normally his face was completely professional, polite but unreadable. However, this morning he looked decidedly grim.

“What is it?” Daniel asked, his voice sharper than he meant it to be.

“There is a policeman outside, Mr. Pitt, and he is asking to see you.”

“Me, or just someone?” Daniel asked.

“You, sir, quite specifically,” Impney replied. “He has one of your cards.”

Kitteridge. Something had happened to Kitteridge. Daniel swallowed hard and kept his voice steady. “Ask him to come in, please,” he instructed.

“I’m sorry to ask you, sir, but they found this card.” He fished in his pocket and produced a calling card.

One glance told Daniel it was his own. “Where did you find it?” Daniel asked.

The policeman shifted his weight from one foot to the other. “In the pocket of a man who is unfortunately dead, sir. At first, we thought it might be his own, but one of our officers knows you by sight and said it wasn’t you.”

“No, sir. If you would come and look at him, sir? It appears that he is someone you know.”

Daniel stood up a trifle unsteadily.

“Are you all right, sir?” the constable asked with concern.

“Yes, thank you,” Daniel answered. He straightened his shoulders.

The young man gave a sigh of relief. He glanced at the coat rack. “It’s already quite warm outside; you won’t need a coat.”

“It’s a long way,” Daniel pointed out. The morgue was well over a mile from Lincoln’s Inn Fields, which housed the most prestigious law chambers in England, including that of fford Croft and Gibson.

“I have a taxi waiting, sir.” The policeman opened the door and stepped out into the passageway.

Daniel left the coat and followed him, explaining to Impney that he was going with the constable to help him in an urgent matter. He did not want to put it into words. Impney was anxious enough already.

“Thank you,” Daniel acknowledged, and followed the constable out of the front entrance, down the few steps to the pavement, and into the waiting taxi. It was one of the new shiny black automobiles that were slowly taking over from the horse-drawn hansom cabs. It was May 1911, well into the new century, not even Edwardian anymore, now into the reign of King George V.

At another time, Daniel would have enjoyed riding in the black taxi. He thoroughly approved of them. But this could have been a vegetable cart for all the pleasure it gave him. He stared out the window at the street. He did not want to talk to the constable. He was choked with fear, emotion, memories of Kitteridge, who had been in the law chambers several years longer than Daniel and knew so much more. He was excellent in court. Once he began to argue a case, all his nervous tension was mastered and he had flashes of positive brilliance. Only Daniel knew he probably had odd socks on and had been too absentminded to eat breakfast. They had solved cases together, complicated and emotional ones as well as simple legal arguments. They had shared successes and failures, long hours researching into the night. There had been one or two dangerous and tragic cases, and people he would never forget.

The last thing Daniel had felt toward Kitteridge was anger because he was late. And now he felt fear. What was the final thing Daniel had said before parting? Please heaven it was not something he would regret forever, now that it was too late to take it back.

They were caught in traffic, as if to illustrate his fears, stuck amidst a mix of automobiles, horse-drawn vehicles, barrows, drays, and hansom cabs. He was in a hurry, impatient to get there. And yet he had to endure crawling through the mass of engines, the shouting of insults. He fidgeted in his seat. The constable glanced at him but said nothing. He made as if to say sorry, then changed his mind. This must be one of the worst parts of this man’s job: having to fetch people to identify the dead body of someone they knew, even loved.

At last they were there. The cab stopped, and the constable paid the fare and led Daniel across the pavement and through the doorway of the morgue. The smell of it enveloped him immediately. The carbolic and lye caught in his nostrils and the back of his throat. He could still smell death here. It lingered long after the corpses were removed.

A morgue attendant appeared from behind of the doors, closing it softly behind him.

“This way, sir,” the constable said, glancing at Daniel anxiously.

Daniel nodded without speaking, knowing the poor man was doing his best. He looked about twenty-five, near Daniel’s own age. They walked side by side and passed through a doorway at the end of the passage and into an anteroom. And then Daniel saw it. It was like a blow that knocked all the air out of his body. There was a boldly checked coat hanging up on a railing. There could not be two coats so ugly in exactly that loud, clanging check. Kitteridge had just bought it, and Daniel had been very rude, calling it an eyesore. And so it was. But he would give anything now to be able to take that back. It had been meant carelessly, teasing. Kitteridge had little sense of style and had trouble getting decent clothes that fit him.

Daniel felt a pull on his arm. It was the constable, gripping him as if to hold him up in case he collapsed. Daniel wanted to shake him off, but the grip was too firm.

Unprotestingly, he was led into the morgue itself. How could people work in a place like this? Everybody had once been living, somebody’s child, or brother, or wife . . . ​or friend.

The police surgeon smiled at him grimly. Daniel had seen the man before but couldn’t remember his name. It did not matter now.

“Thank you, sir,” the man said gently. “Just look at his face, if you don’t mind. Are you ready?”

The surgeon pulled the sheet back. It was stained with blood in patches all the way down. Daniel forced himself to look. He knew the face, in spite of the knife slashes across the cheek and nose, and another over the neck, dark with congealed blood. It was not Kitteridge—although he was about the same height, as well as Daniel could judge of a man lying down—but Jonah Drake, one of the senior lawyers in his own chambers, one of the cleverest in court. Not a particularly likable man, but one with skills Daniel could not deny. In fact, reluctantly, he had admired him.

Daniel was ashamed of himself for the wave of relief he felt that it was not Kitteridge. It was as if a physical pain had vanished, to be replaced by mere discomfort.

“Sir?” The surgeon’s voice broke through his thoughts.

“Yes . . .” He paused as a wave of relief flooded over him. “This is not Kitteridge. It’s his coat on the rail, but that’s Jonah Drake, a senior partner in our chambers.”

“Yes. Kitteridge is in his mid-thirties; Mr. Drake is sixty, at the very least. It’s Mr. Drake. I don’t know why he had Kitteridge’s coat. He must have borrowed it . . .” His voice sounded awkward, far away.

“Jonah Drake. Has he any relatives we should inform? A wife, perhaps? Or children?”

Daniel tried to clear his mind of the violence and the reality of death, to think clearly. “No. No, I don’t think so. I’ll tell Mr. fford Croft, the head of our chambers. He’ll know.” 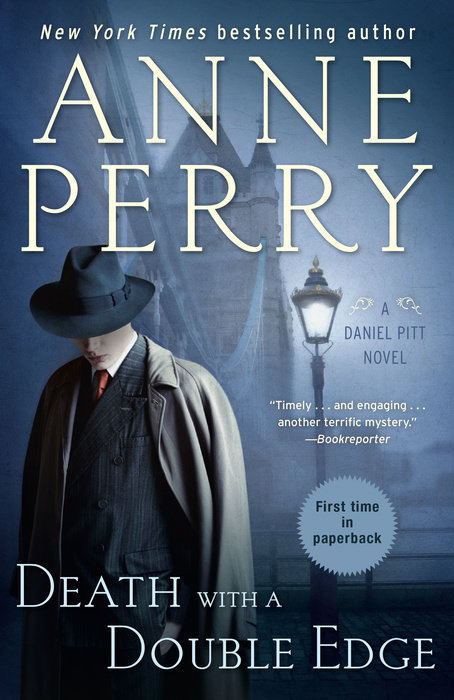