NEW YORK TIMES BESTSELLER • The heroes of the High Republic era return to face a shattered peace and a fearsome foe, following the dramatic events of Light of the Jedi.

In the wake of the hyperspace disaster and the heroism of the Jedi, the Republic continues to grow, bringing more worlds together under a single unified banner. Under the leadership of Chancellor Lina Soh, the spirit of unity extends throughout the galaxy, with the Jedi and the newly established Starlight Beacon station at the vanguard.

In celebration, the chancellor plans the Republic Fair, a showcase of the possibilities and the peace of the expanding Republic—a peace the Jedi hope to foster. Stellan Gios, Bell Zettifar, Elzar Mann, and others join the event as ambassadors of harmony. But as the eyes of the galaxy turn toward the fair, so too does the fury of the Nihil. Their leader, Marchion Ro, is intent on destroying this unity. His storm descends on the pageantry and celebration, sowing chaos and exacting revenge.

As the Jedi struggle to curb the carnage of the rampaging Nihil, they come face-to-face with the true fear their enemy plans to unleash across the galaxy—the kind of fear from which even the Force cannot shield them.

An excerpt from Star Wars: The Rising Storm (The High Republic)

A comet plowed into the ice field, setting off a devastating chain reaction. Asteroids and space rocks bounced off one another like billiard balls. The only difference here was that most of the balls weighed millions of tons and could crush a ship like an egg. Those that weren’t completely obliterated by the impacts were reduced to razor-sharp shards that only added to the wave of destruction.

No spacer entered the Rystan Badlands lightly. The ice field was filled with the twisted wreckage of cruisers that had attempted to run the gauntlet of colliding planetoids and failed. On a good day it was a dangerous, idiotic endeavor. On a bad day it was suicide.

Today was a very bad day.

The Squall Spider bucked as it weaved through the spinning rocks. The craft was small, barely larger than a shuttle, but it was fast and as maneuverable as any of the Jedi’s famed Vectors. In fact, anyone watching the strange arachnid-like craft could have been forgiven in thinking that a Jedi sat at the controls. Who else could have negotiated the ever-shifting starscape, weaving left and then right to avoid being pulverized by giant balls of ice? But the being in the pilot’s seat couldn’t have been further from a Jedi. The Jedi were the defenders of life and light the galaxy over. They lived for others, never for themselves, maintaining peace and harmony wherever they roamed. In short, they were heroes.

Udi Dis, on the other hand, had been born a Talortai but now only identified as a Nihil. As broad as he was tall, the avian had dedicated his life to piracy and plunder, taking what he wanted and decimating whatever was left. It wasn’t a noble life, but it was the only one he knew, and it had given him a place in the universe that had repeatedly spat in his face.

The only thing Dis had in common with the Jedi was his connection to the Force. Many Talortai were sensitive to the energy field that bound the universe together, but few of his species ever made use of it, the cowards. They said it wasn’t their right, that to do so was somehow immoral. Dis had never understood why. If you were lucky enough to have abilities, shouldn’t you use them, hone them to gain an advantage over those who didn’t? This was why the majority of Talortai were doomed to remain where they were, scratching out a meager existence on Talor while he was out here in the stars. Sure, he had been let down many times, sometimes by others, most often by himself, but the Force had never betrayed him, not once. Life would have been better if he hadn’t gotten himself addicted to reedug, but for now he was sober and had never felt so alive.

Dis clutched the controls with clawed hands, his muscled arms bunching as he slewed the Spider sharply to starboard, skillfully avoiding the debris that, with a lesser pilot at the helm, would have killed everyone on board. But Dis knew the badlands like the back of his feathered hand, even though he had never flown them before. All Talortai had an innate sense of direction, feeling the vibrations of the cosmos in their bones, but Dis’s navigational skills were off the chart. Thanks to his talents, he could feel the location of every asteroid in the field. He didn’t need maps or even a navidroid. All he needed was the Force.

Behind him, the door to the Spider’s cockpit slid open, stale air gushing from the planet-hopper’s cramped corridors. Dis didn’t turn to see who it was. There was no need. He heard the scrape of the boots on the deck plates, felt the swish of the cloak through the air, Dis’s feathers ruffling in response to the presence of the man he had pledged to serve for the rest of his life.

The Eye of the Nihil.

Had he been surprised when Ro approached him about this mission? Of course he had. He had no idea the Eye even knew his name, let alone what he could do in the pilot’s seat. Dis had spent the last few years serving on the Cloudship of a saw-mouthed Crocin who went by the name of Scarspike, a thug who spent more time abusing his crew than planning raids. And it showed. Dis had killed Scarspike after a botched attack on Serenno’s funeral moon. They had lost three Nihil that day, but Scarspike had lost more, Dis opening his scrawny throat with a slash of a wingblade. Dis had no idea if the Cloud’s slaughter had first brought him to the Eye’s attention. Maybe, maybe not. All Dis knew was that he suddenly found himself elevated beyond the Strikes and the Clouds and all the Nihil’s ranks to join Ro’s personal retinue. His aggrandizement didn’t go unnoticed. The Nihil had a strict hierarchy. You started as a lowly Strike, working your way up to Cloud and eventually to Storm. The Nihil horde was organized into three Tempests, each commanded by a Tempest Runner. There was Pan Eyta, a towering Dowutin with ideas above his station, the cold and efficient Twi’lek Lourna Dee, and the latest appointment, a scheming Talpini known as Zeetar. It was fair to say that the Talpini’s promotion had put Pan’s squashed nose out of joint. Dis’s sudden promotion had only rankled him further. Pan and Dis had almost come to blows, the Dowutin claiming that Ro was undermining the Nihil’s Rule of Three. Unlike the Tempest Runners, the Eye was supposed to have no crew of his own. Yes, he had the casting vote when making plans, and yes, he provided the navigational Paths that the Nihil used to avoid Republic entanglement (well, most of the time, at least). Dis suspected that if it weren’t for the Paths, Pan would have sent Ro spinning out of an air lock long ago, but the navigational aids were too valuable. They gave the Nihil the edge, so Eyta’s concerns fell on deaf ears. Dis was welcomed aboard Ro’s vast flagship, the Gaze Electric, which was largely maintained by a crew of silent droids, its many chambers empty, like a palace with no occupants. It was here, in Ro’s inner sanctum, that Dis had learned they were heading to Rystan on a private mission—not that they could have taken the Gaze, of course. The ship rarely left the Nihil’s base on Grizal, and even then split itself into a smaller secondary craft that left the bulk of the Gaze behind, but even that would be too cumbersome to make it through the ice field in one piece. They needed something smaller. They needed the Squall Spider.

“How long until we clear the badlands?” Ro asked, resting a gauntleted palm on the back of Dis’s seat.

Dis swiveled in his chair to face his leader. “I still don’t know what I should call you. My Eye? Sir?”

Ro’s thin lips curled at the obvious distaste in Dis’s voice, his dark eyes glinting in the red light that streamed in through the viewport.

Dis’s chest swelled. He had never been one for the chain of command, which was probably why he had stayed a Strike for so long; that and the fact he’d spent most of the last decade in a reedug stupor. But now look at him, on first-name terms with Ro himself. No one called the Eye Marchion, not even Pan.

“I still think it would’ve been easier to use a Path,” Dis said, finally bringing the Spider out of the ice field to slingshot around Rystan’s weak star.

Ro walked over to the vacant gunner’s station to recover his mask, which had remained on the console ever since they had left the Great Hall.

“But then I wouldn’t have seen a master at work,” the Eye replied, wiping the mask’s frosted visor with his sleeve. “You’re every bit as impressive as your heritage suggested you would be, especially now that you’re free from your . . . ​affliction.”

Yeah, he was free all right. Ro had made Dis throw what little remained of his stash into a trash compactor back on board the Gaze. His mind was clear for the first time in years, his connection to the Force stronger than ever. There was no way he could have made it through the ice field when he was on reed. He owed Ro so much.

“And to think we had a Force-user in our midst all these years . . .” Ro continued, checking the filters of his mask. “Scarspike was a fool. I’m glad he’s dead.”

You’re not the only one, Dis thought, but kept the thought to himself as the Spider dropped into Rystan’s thin atmosphere.

“Have you ever been to a tidally locked world?” Ro asked.

“They’re fascinating,” the Eye told him. “One face constantly angled toward the sun, its surface little more than charred desert.”

“While the other’s a frozen wilderness,” Dis said, the blasted terrain not inspiring much confidence. “So where do we land?”

Ro pointed at a band of barely habitable land that ran between the two extremes. “There.”

“Is there a spaceport?”

Ro directed them to a patch of barren ground, clumps of rollweed tumbling across the wasteland.

“Are you sure this is the place?” Dis asked as the landing gear deployed. “There’s nothing here.”

Ro merely smiled as he slipped his mask over his head. “Oh, you’ll be surprised . . .”

Cavan Scott is the New York Times bestselling author of Star Wars: The High Republic: The Rising Storm, Star Wars: Dooku: Jedi Lost, The Patchwork Devil and the hit supernatural comic book series Shadow Service. One of the five story architects for Lucasfilm’s bestselling multimedia initiative, Star Wars: The High Republic, Cavan has written comics for Marvel, DC Comics, Dark Horse, IDW, 2000AD and more. A former magazine editor, he lives in the United Kingdom with his wife and daughters. His lifelong passions include folklore, audio drama, the music of David Bowie and scary movies. He owns far too much LEGO. 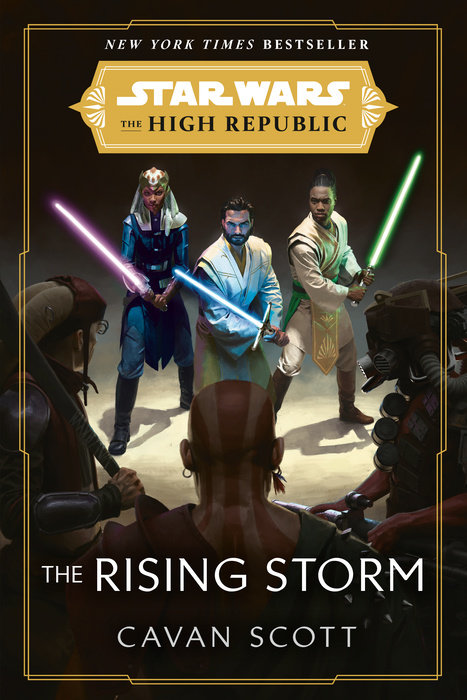