Throughout her difficult pregnancy and following her frightening labor experience, Amy Schumer found camaraderie and empowerment in hearing birth stories from other women, including those of her friend Christy Turlington Burns. Turlington Burns’s work in maternal health began after she experienced a childbirth-related complication in 2003—an experience that would later inspire her to direct and produce the documentary feature film No Woman, No Cry, about the challenges women face throughout pregnancy and childbirth around the world.

It is through Schumer and Turlington Burns’s conversations that the idea for Arrival Stories was born. By sharing their experiences, the contributors to Arrival Stories offer an informative and deeply affecting account of what it feels like when a woman first realizes she is a mother. This beautiful collection features essays by:

Intimate and urgent, Arrival Stories offers a panoramic view of motherhood and highlights the grave injustices that women of color face in maternal healthcare. It is the perfect book for any expectant or new mother, or for anyone who knows and loves one.

An excerpt from Arrival Stories

It’s time to break one of the unspoken rules of motherhood. Since, well, forever, women have been taught not to tell the story of birthing our babies. Taught by whom? Well, that’s a story for a whole other book but, unbelievably, in the year 2022, it feels like the rule still applies. What happens to us in the most vulnerable and powerful hours of our lives isn’t supposed to be shared in all its stark, bloody detail. Instead, we are told to be grateful, to accept pain and suffering as simply part of the gig of motherhood. Conception, pregnancy, birth, matching with your baby through adoption, or the period of time after birth can be incredibly difficult, frightening, even traumatic. It can also be joyful and empowering. And it can be all these things at the same time. No matter how it happens, the arrival of a child is a life-altering event. And yet, all too often we keep quiet about our experiences. Why shouldn’t we talk about the beautiful mess of it all?

Change often begins with the simple act of people coming together to share knowledge and experience to lift each other up. This is how we birth ideas and cultural movements: together. Life is about sharing stories. These are some Arrival Stories. This book was born in conversation between Amy Schumer and Christy Turlington Burns when Amy was very pregnant and Christy visited her. After months of throwing up every single day, Amy had been diagnosed with hyperemesis gravidarum, an extreme form of morning sickness. When she shared the story of her illness—the raw, unvarnished truth of it—on social media, friends and strangers alike responded with incredible messages of support. Amy went from feeling isolated in her struggle, to understanding that many others had persevered through the same or similar challenges. Hearing their stories gave Amy the comradery and the encouragement she desperately needed at that time. But Amy soon saw that it didn’t end with her. When she heard from other women who saw themselves in her story, Amy realized that sharing had not only helped her, it had helped other people too.

Amy wanted to find a way to keep the chain going, to pay her good fortune forward. Talking to Christy, she learned more about Christy’s nonprofit organization, Every Mother Counts, which seeks to make pregnancy and birth safe for women all over the globe. Christy started Every Mother Counts in 2010, after suffering from a retained placenta and severe bleeding hours after delivering her healthy daughter. Christy sensed that Amy was ready to handle the devastating truth of maternal healthcare and so she decided to share the statistics.

In the United States, maternal healthcare is in crisis. Our country has the highest maternal mortality rate in the developed world. Although most are preventable, maternal deaths have been increasing in the U.S. since 2000. It’s worse for women of color, who are three times more likely to die than their white counterparts. Even in a wealthy city like New York (where Amy was born), women of color are twelve times more likely to die unnecessarily from childbirth. These statistics rocked Amy to her core. It all begged the question, one that Christy has been asking since she started Every Mother Counts more than a decade ago: Why are so many mothers dying?

Women, especially women of color, do not have a voice in a biased system that has long been much more invested in the research and funding of men’s health issues. In 2020, a United Nations global report found that close to 90 percent of all people are biased against women, and the medical world is no exception. Medical research has often excluded women, partially because scientists wrongfully assumed that their hormones and menstrual cycles made them difficult to study. A 2018 study found that doctors often view men with chronic pain as “brave” or “stoic,” but they described women with chronic pain as “emotional” or “hysterical.” The U.S. also has a history of denying Black women their consent for performing medical experiments. Looking at the systemic racism embedded in every American institution, it’s not surprising to find it deeply entrenched in the medical world. But that doesn’t mean we must accept a high maternal mortality rate as a permanent reality of living in America. We must not let racism, sexism, or any other scourge of humankind keep women unsafe. Every mother deserves safety and protection not only for her baby but for herself too.

After Amy talked to Christy, she couldn’t stop thinking about the indelible crash course in maternal health she’d been given. Soon enough, she called Christy with the idea to curate a collection of birth stories from many kinds of mothers, a book that would push back against the mandate to stay silent about our experiences, against the implicit notion that our pain is not important. The book would be a way to extend a hand to women everywhere, to say: I want to hear your story. And here’s mine, here’s hers, and here are others’. You are not alone. How can we help each other? Christy was, of course, enthralled with the idea. And so the two set about making a list of some of the most dynamic mothers they knew.

Arrival Stories is a collection of more than twenty unique birth stories, but also rebirth stories. Our rebirths. A woman is reborn when she leaps from the edge of who she once was into the fire of a new identity: mother. Transformation doesn’t just happen with the arrival of one’s first child. Whether it’s the first time a woman welcomes a child into the world, or the fifth, each birth experience is life-changing, each time is singular. And transformation pours out beyond labor, beyond the operating room or the home birthing pool. The title Arrival Stories comes from the idea that arriving at motherhood, or parenthood, is a process, and it can happen at any time: the first time the baby kicks in utero, in the middle of the night while nursing or bottle-feeding, or while you’re crying from gratitude and exhaustion at your baby’s first birthday party, or maybe you don’t feel you’ve “arrived” at motherhood until you’re in a therapy session three years after your child’s birth. There are many moments of arrival to motherhood, and once there, the experience keeps deepening, even after your “baby” is all grown up.

Between the covers of this book, you will meet all kinds of women—doctors, daughters, sisters, writers, wives, academics, comedians, doulas, actors, athletes, models, executives—at their most primal, and their most resourceful. In no way do these stories represent the whole spectrum of birthing experiences. While the contributors in this collection identify as women, we understand that gender is not binary and that there are millions of people who do not identify as women who have arrival stories to share. This book is meant to be a conversation starter, and we encourage people who do not see themselves represented in these pages to share their stories, to let their experiences be known. We want to hear more; we will never stop listening.

We told our stories too. Even though it’s been eighteen years since Christy gave birth to her daughter, Grace, telling the story of Grace’s birth here allowed Christy the opportunity to see it in a new way, informed as she is now by the years of work she has done with Every Mother Counts. Not being able to birth her placenta led Christy to investigate what happens to other mothers in similar circumstances around the world, a quest that “gave birth” to Every Mother Counts. Reading the other women’s stories has been profound too. There’s elation, bliss, loss, and the purest sorrow on these pages. There are healing, hilarious moments, and moments that remind us of the innate wisdom of our instincts. The spectrum of the motherhood experience is on display in this collection.

This book is for everyone—all birthing people, every configuration of family, and for those who are not mothers now, and won’t, can’t, or don’t want to be mothers in the future. We were all born from a mother, every single one of us, so we all benefit from knowing more about these experiences. We hope that as you read these essays, you’ll see the power of sharing the unique, raw, brutal, and treasured moments that we all face in life. Telling these stories is a way of gathering our resources, our strength, and our will to fight. Our collective ferocious power will go toward changing the dangerous and unsafe conditions in maternal healthcare. Thank you for joining us in changing what we cannot accept. We are proud to do the work alongside you. 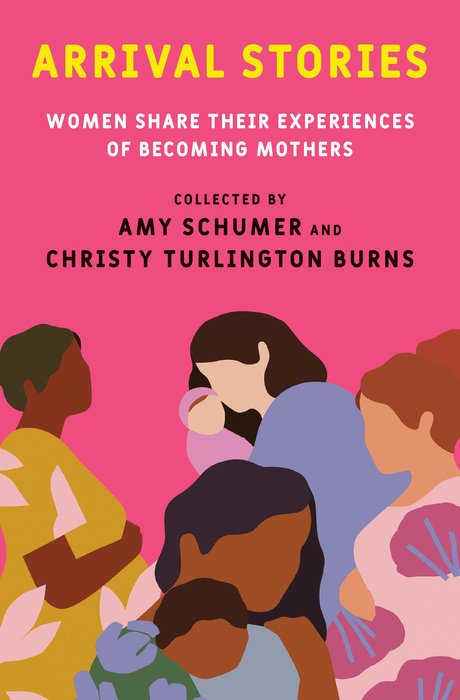