A Novel in Six Novellas

From the New York Times bestselling author of Bird Box and Malorie comes a chilling story that revolves around a mysterious small town, revealing its sinister secrets one by one.

NAMED ONE OF THE BEST BOOKS OF THE YEAR BY THE WALL STREET JOURNAL • “Must-read horror.”—Publishers Weekly (starred review)

Goblin seems like any other ordinary small town. But with the master storyteller Josh Malerman as your tour guide, you’ll discover the secrets that hide behind its closed doors. These six novellas tell the story of a place where the rain is always falling, nighttime is always near, and your darkest fears and desires await. Welcome to Goblin. . . .

A Man in Slices: A man proves his “legendary love” to his girlfriend with a sacrifice even more daring than Vincent van Gogh’s—and sends her more than his heart.

Kamp: Walter Kamp is afraid of everything, but most afraid of being scared to death. As he sets traps around his home to catch the ghosts that haunt him, he learns that nothing is more terrifying than fear itself.

Happy Birthday, Hunter!: A famed big-game hunter is determined to capture—and kill—the ultimate prey: the mythic Great Owl who lives in Goblin’s dark forests. But this mysterious creature is not the only secret the woods are keeping.

Presto: All Peter wants is to be like his hero, Roman Emperor, the greatest magician in the world. When the famous magician comes to Goblin, Peter discovers that not all magic is just an illusion.

A Mix-Up at the Zoo: The new zookeeper feels a mysterious kinship with the animals in his care . . . and finds that his work is freeing dark forces inside him.

The Hedges: When his wife dies, a man builds a hedge maze so elaborate no one ever solves it—until a little girl resolves to be the first to find the mysteries that wait at its heart.

An excerpt from Goblin

A MAN IN SLICES

Richard stood outside Charles’s house with a heavy rain crashing against his face. A rain so thick that, earlier tonight, Charles appeared to vanish, after exiting Richard’s car, like he’d stepped through a wet curtain. The pair had had a decidedly weird night, or rather Richard was the one who suffered the strange; Charles’s night must have been something more . . . ​liberating.

They’d spent many hours parked downtown, at the corner of Lily and Neptune, as all that Goblin rain came furious against the windshield. The wipers of Richard’s Dodge Dart remained asleep, and the water poured down the glass like at the car wash on Samhattan Street. Charles unloaded some things he didn’t feel like keeping secret anymore. Richard, the good friend, had listened. And now, long after Charles stepped through that curtain (and Richard was left with the story), Richard stood under that very rain, staring into the eyes of the life-sized topiary of Charles himself. It was one of Wayne Sherman’s finest, most Gobliners agreed. But Richard wasn’t thinking of the fabled proprietor of The Hedges. Rather, he weighed whether or not he had to turn his old friend in to the Goblin Police. He could phone Mayor Blackwater directly. That felt right, somehow. The mayor’s tie to this city went further back than any bond between its citizens ever could.

Richard could defend Charles all he wanted (and how he had!). He could argue that everybody, even a monster, needed a friend (and how he was!). He could preach that Charles had never meant anybody any harm. That his friend lived without a governor, outside the social constructs that crippled so many. And yet being free was not necessarily being happy. And Richard would never be able to hide the fact that he knew his friend was troubled.

Tonight Richard wore his green slicker, the rain coming down so heavy it molded the plastic to his upper body, making him look something like a topiary himself. He looked into the eyes of that Sherman work of art and saw the same vacancy that he noted in the eyes of the actual man he’d just been with. Did Wayne Sherman recognize this in Charles? When he lifted his shears to clip the leaves, did Charles’s vacancy burn in his mind like it burned in Richard’s now? Perhaps every topiary, marble statue, and plaster casting ever rendered had something of that same void.

The void that Charles was.

Richard closed his eyes and when he opened them, the bush statue remained. Charles in nature. Charles’s nature.

Charles wasn’t the only kid Richard’s mom advised her son to steer clear of, but it struck him as extra meaningful when, after seeing Charles the eleven-year-old for the first time, she leaned in and said,

“You must try to avoid that one, Richard.”

It was clear to everyone who met him that Charles was something problematic. Not the manic, destructive hell-raiser or the conniving and enervated bully that unnerved so many adults, but the sort that even those types of kids stayed away from. From the start, Charles was different in a different way.

And Richard became his only friend.

You’ve put me in a spot, Charles, Richard thought, staring into the deep-green eyes of that Sherman topiary.

Even by Goblin standards the rain was fantastic, punishing, and Richard thought back, attempting to isolate Charles’s history in a jar, the history he’d witnessed himself, growing up in Goblin, through the years.

High school parties where girls pulled Richard aside to ask him what was wrong with his friend.

Times at Charles’s house when Richard saw real and raw fear in the eyes of Charles’s own parents.

Times when Richard was just as afraid.

Was there a singular moment, a beat or a bump, that could act as a finger and point to the story Charles had just unloaded in the car? Should Richard have seen this story coming?

Staring into the dark-green, leafy eyes of the false man before him, Richard thought hard about the real one.

The day Charles moved to Goblin, Richard’s doorbell rang and his mom, looking through the living room window, flashed Richard a concerned expression.

But Richard was curious. A new friend? Richard, a shy bookworm, could use all the friends he could get.

Richard answered the door himself.

He pointed up the street. Richard knew the house.

“Well,” Charles said, “our names should keep us close together even if our interests don’t. Roll call. Lockers. You know.”

Richard liked him right away. Charles was nothing like the other boys from Goblin: the kids who tried so hard to stay cool. The kids who made more jokes than they did observations. The world felt youthful, open, and Richard noted a spark of inner electricity. Maybe the odd new neighbor could show him odd new things.

“I’m interested in the Blackwater River,” Charles said, without a qualifier. But Richard understood it was an invitation.

After closing the door, Richard asked his mom if he could show Charles the river.

“Be back in two hours,” she said. Then she pointed at him, her way of underscoring a rule.

Though he was far from high school, Richard grabbed his Goblin Marauders sweatshirt and joined Charles outside.

“You’ll show me the Blackwater River?”

“No,” Richard said, already heading up the street. “I’ll show you Goblin.”

And so he did. And how fresh Goblin looked to Richard then! Through the eyes of a new friend! How new the very street he lived on! Even the stop sign shone bright red in the afternoon sun.

This is Goblin, Charles! My hometown. And now your hometown, too. Isn’t it something? Isn’t it magic?

“Coach Snow used to live there,” Richard said, pointing to the last house in the neighborhood before reaching Christmas Road.

“What does he coach?”

“What did he coach. Track and field. But the guy met a nasty end, they say. Found in pieces in a well.”

So many legends, so many yarns. Richard could feel the swell of the city building within him. Its history, its characters, its soul.

And much of that soul could be found in the rain.

“It’s a fact that there’s sixty percent more rain in Goblin than any city within a hundred miles. Some people say it’s the original sixty settlers, crying from up there.” Richard pointed to the blue sky.

“What happened to the settlers that they would cry?” Charles had asked.

Richard could feel Goblin working its magic on the newcomer already.

“Ambushed by natives. Dad says they had it coming. I don’t doubt it.”

As the boys walked up Christmas, as the very tops of the buildings of downtown came into view, Richard told Charles about how the sun set a full minute before all the neighboring towns because Hardy Carroll (the legendary unruly son of Goblin’s founder) lost a bet and, too afraid to ask his father for the money, agreed to pay in daylight. How the paved roads were all so bumpy because the city’s construction crews decided not to wait for the protestors to get out of the way. How the North Woods harbored Great Owls, Goblin’s very own endangered species.

“Off limits,” Richard said. “Protected by the police. And you don’t want to mess around with the Goblin Police. They’re . . . ​spooky.”

“It sounds like a lot of Goblin is spooky.”

“See the cemetery over that way?” Richard pointed to a crowded lot. Stones very close together.

“In Goblin the dead are buried standing up.”

Charles’s eyes grew wide. The image associated with this information was crystal clear, Richard knew, as it was for him when he learned it, too.

What pride Richard felt, painting this detailed picture of his hometown for a new friend to view!

“You see that great brown building, Charles? With the white windows?”

“That’s Goblin General. Where I was born.”

Richard told Charles how the hospital was once quarantined when it was discovered that an RN had contracted leprosy. How no one was allowed to leave, for fear of contaminating the city at large, and how all two hundred and twelve people inside gradually deteriorated, peeling to pieces, before all of them died and Goblin sanitation removed what remained with mops.

Josh Malerman is a New York Times bestselling author and one of two singer/songwriters for the rock band The High Strung. His debut novel, Bird Box, is the inspiration for the hit Netflix film of the same name. His other novels include Unbury Carol, Inspection, A House at the Bottom of a Lake, and Malorie, the sequel to Bird Box. Malerman lives in Michigan with his fiancée, the artist-musician Allison Laakko.

A Novel in Six Novellas 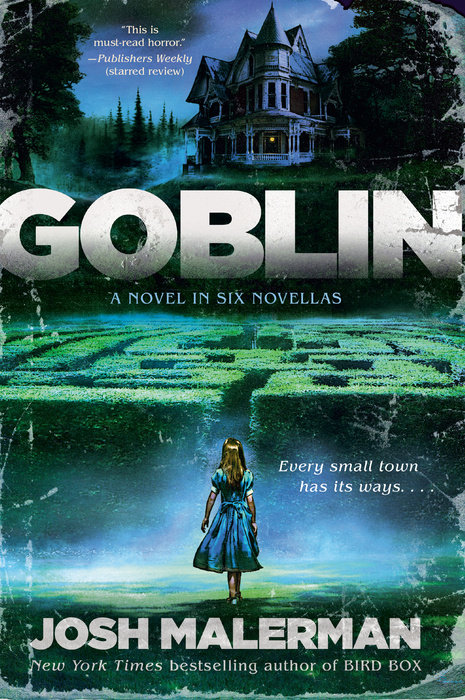