NAMED ONE OF THE BEST BOOKS OF THE YEAR BY MARIE CLAIRE • “The kind of heart-pounding conclusion that thriller fans crave . . . In the end, a book full of darkness lands with a message of hope.”—The New York Times Book Review

“This mystery will keep you guessing, and stay with you long after you finish. Dive in.”—Daily Skimm

Anna Hart is a seasoned missing persons detective in San Francisco with far too much knowledge of the darkest side of human nature. When tragedy strikes her personal life, Anna, desperate and numb, flees to the Northern California village of Mendocino to grieve. She lived there as a child with her beloved foster parents, and now she believes it might be the only place left for her. Yet the day she arrives, she learns that a local teenage girl has gone missing.

The crime feels frighteningly reminiscent of the most crucial time in Anna’s childhood, when the unsolved murder of a young girl touched Mendocino and changed the community forever. As past and present collide, Anna realizes that she has been led to this moment. The most difficult lessons of her life have given her insight into how victims come into contact with violent predators. As Anna becomes obsessed with saving the missing girl, she must accept that true courage means getting out of her own way and learning to let others in.

Weaving together actual cases of missing persons, trauma theory, and a hint of the metaphysical, this propulsive and deeply affecting novel tells a story of fate, necessary redemption, and what it takes, when the worst happens, to reclaim our lives—and our faith in one another.

An excerpt from When the Stars Go Dark

The night feels shredded as I leave the city, through perforated mist, a crumbling September sky. Behind me, Potrero Hill is a stretch of dead beach, all of San Francisco unconscious or oblivious. Above the cloud line, an eerie yellow sphere is rising. It’s the moon, gigantic and overstuffed, the color of lemonade. I can’t stop watching it roll higher and higher, saturated with brightness, like a wound. Or like a door lit entirely by pain.

No one is coming to save me. No one can save anyone, though once I believed differently. I believed all sorts of things, but now I see the only way forward is to begin with nothing, or whatever is less than nothing. I have myself and no one else. I have the road and the snaking mist. I have this tortured moon.

I drive until I stop seeing familiar landmarks, stop looking in my rearview to see if someone is following me. In Santa Rosa, the Travelodge is tucked behind a superstore parking lot, the whole swath of it empty and overlit, like a swimming pool at night with no one in it. When I ring the bell, the night manager makes a noise from a back room and then comes out cheerfully, wiping her hands on her bright cotton dress.

“How are you?” she asks. The world’s most innocuous question, impossible to answer.

She holds out the registration card and a purple pen, the dimpled flesh under her arm unfurling like a wing. I feel her looking at my face, my hair. She watches my hands, reading upside down. “Anna Louise Hart. That’s sure a pretty name.”

“Don’t you think so, baby?” Her voice has the Caribbean in it, a rich, warm slant that makes me think she calls everyone “baby,” even me.

It’s hard work not to flinch at her kindness, to stand in the greenish cast of the fluorescent bulb and write down the number of my license plate. To talk to her as if we’re just any two people anywhere, carrying on without a single sorrow.

She finally gives me my key, and I go to my room, shutting the door behind me with relief. Inside there’s a bed and a lamp and one of those oddly placed chairs no one ever sits in. Bad lighting flattens everything into dull rectangles, the tasteless carpet and plastic-­looking bedspread, the curtains missing their hooks.

I set down my duffel in the center of the bed, take out my Glock 19 and tuck it under the stiff pillow, feeling reassured to have it nearby, as if it’s an old friend of mine. I suppose it is. Then I grab a change of clothes, and start the shower, taking care to avoid the mirror as I undress, except to look at my breasts, which have hardened into stones. The right is hot to the touch, with a blistered red mound surrounding the nipple. I run the water in the shower as hot as it will go and stand there, being burned alive, with no relief at all.

When I climb out, dripping, I hold a washcloth under the faucet before microwaving it, sodden, until it smokes. The heat feels volcanic as I press it hard against myself, singeing my hands as I bend double over the toilet bowl, still naked. The loose flesh around my waist feels as rubbery and soft against my arms as a deflated life raft.

With wet hair, I walk to the all-­night drugstore, buying ACE bandages and a breast pump, ziplock bags, and a forty-­ounce bottle of Mexican beer. They only have a hand pump in stock, awkward and time-­consuming. Back in my room, the heavy outmoded television throws splayed shadows on the bare wall. I pump with the sound off on a Spanish soap opera, trying to distract myself from the ache of the suction. The actors make exaggerated movements and faces, confessing things to one another while I labor on one breast and then the other, filling the reservoir twice and then emptying the milk into the baggies I label 9/21/93.

I know I should flush it all, but I can’t make myself do it. Instead, I hold the bags for a long minute, registering their meaning before tucking them into the freezer of the small convenience unit and closing the door, and thinking only briefly about the housekeeper who will find them, or some road­strung trucker looking for ice and feeling repulsed. The milk tells a whole sordid story, though I can’t imagine any stranger correctly guessing at the plot. I’m having a hard time understanding it myself, and I’m the main character; I’m writing it.

Just before dawn I wake feverish and take too many Advil, feeling my throat catch and burn around the capsules. A breaking-­news banner is running across the bottom of the TV. forty-­seven confirmed dead in big bayou, alabama. deadliest crash in amtrak history. Sometime in the middle of the night, a towboat on the Mobile River has gotten off course in heavy fog and driven a barge into the Big Bayou Canot Bridge, displacing the track by three feet. Eight minutes later, running right on schedule, the Amtrak Sunset Limited traveling from Los Angeles to Miami has slammed into the kink at seventy miles per hour, shearing off the first three cars, collapsing the bridge, and rupturing the fuel tank. Amtrak is citing negligence of the tugboat driver. Several crew members are missing, and recovery efforts are still underway. President Clinton is supposed to visit the site later today.

I click off the set, wishing that the rubbery red button on the remote could work to shut off everything, inside and out. Chaos and despair and senseless death. Trains hurtling toward kinks and gaps, everyone aboard sleeping and clueless. Tugboat captains on the wrong river at exactly the wrong moment.

Eight minutes, I want to scream. But who would hear me?

Once I worked a missing persons case, a boy we later found in pieces under his grandmother’s porch in Noe Valley, the grandmother on a creaking, peeling porch swing directly over his body when we pulled up. For months after, I couldn’t get her face out of my mind, the powdery folds of skin around her mouth, frosted pink lipstick painted just beyond her upper lip. The serenity in her watery blue eyes.

Her grandson, Jeremiah Price, was four. She had poisoned him first, so he wouldn’t remember the pain. “Remember” being her word, the first word in the story she was telling herself about what she’d felt she’d had to do. But the story had no center, not to anyone but her. When we took her confession, we asked her the same question over and over. Why did you kill him? She could never tell us why.

In my dim room at the Travelodge, a rotary phone sits on the cheap, scarred bedside table with instructions for dialing out and the rate of long-­distance charges. Brendan picks up on the second ring, his voice slow and thick, as if it’s coming through concrete. I’ve woken him up. “Where are you?”

“You should get some sleep. You sound awful.”

“Yeah.” I look down at my bare legs on the bedspread, feeling the Brillo pad scratchiness of the cheap fabric against my thighs. My T-­shirt is damp and wadded, stuck with sweat to the back of my neck. I’ve wrapped my breasts in a tourniquet of bandages, and the pain, in spite of all the Advil, sends a pinging ache through me with each heartbeat, a ragged sort of echolocation. “I don’t know what to do. This is awful. Why are you punishing me?”

“I’m not, it’s just—­” There’s a long, freighted pause as he weighs his words. “You have to figure some things out for yourself.”

“How am I supposed to do that?”

“I can’t help you.” He sounds defeated, stretched to the breaking point. I can picture him on the side of our bed in dawn light, his body hunched over the phone, one hand in his thick dark hair. “I’ve been trying, and I’m tired, you know?”

“Just let me come home. We can fix this.”

“How?” he asks breathily. “Some things aren’t fixable, Anna. Let’s just both take some time. This doesn’t have to be forever.”

Something in his tone makes me wonder, though. As if he’s cut the cord but is afraid to acknowledge it. Because he doesn’t know what I’ll do. “How much time are we talking? A week or a month? A year?”

On the bed next to me, my own hand looks waxy and stiff, like something that belongs on a mannequin in a shopping mall. I look away, fixing on a point on the wall. “Do you remember when we first got married? That trip we took?”

He’s quiet for a minute, and then says, “I remember.”

“We slept in the desert under that huge cactus with all the birds living inside. You said it was a condominium.”

Another pause. “Yeah.” He isn’t sure where this is going, isn’t sure I haven’t lost it completely.

I’m not so sure myself. “That was one of our best days. I was really happy.”

“Yeah.” Through the phone his breathing quickens. “The thing is, I haven’t seen that woman in a long time, Anna. You haven’t been here for us and you know it.”

Paula McLain is the New York Times bestselling author of the novels Love and Ruin, Circling the Sun, The Paris Wife, and A Ticket to Ride, the memoir Like Family: Growing Up in Other People’s Houses, and two collections of poetry. Her writing has appeared in The New York Times, Good Housekeeping, O: The Oprah Magazine, Town & Country, The Guardian, The Huffington Post, and elsewhere. She lives in Ohio with her family. 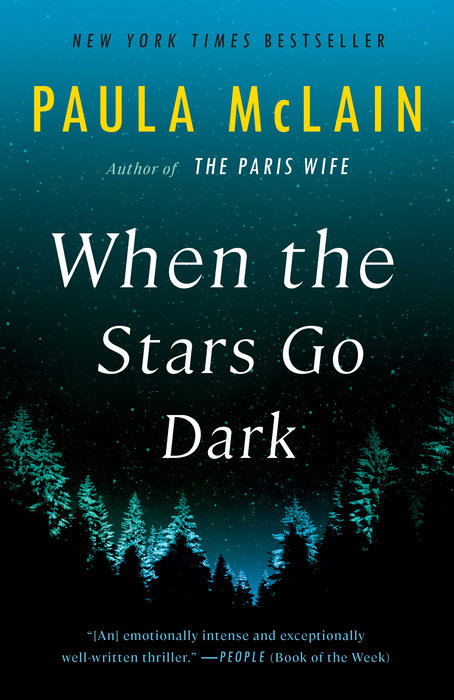