Inside the Most Entertaining and Influential Conference in College Basketball History

The definitive, compulsively readable story of the greatest era of the most iconic league in college basketball history—the Big East

“This book, full of long-standing rivalries, unmatched moments in the lives of coaches and players, and juicy insider gossip, is, like the game of basketball, a ton of fun.”—Philadelphia magazine

The names need no introduction: Thompson and Patrick, Boeheim and the Pearl, and of course Gavitt. And the moments are part of college basketball lore: the Sweater Game, Villanova Beats Georgetown, and Six Overtimes. But this is the story of the Big East Conference that you haven’t heard before—of how the Northeast, once an afterthought, became the epicenter of college basketball.

Before the league’s founding, East Coast basketball had crowned just three national champions in forty years, and none since 1954. But in the Big East’s first ten years, five of its teams played for a national championship. The league didn’t merely inherit good teams; it created them. But how did this unlikely group of schools come to dominate college basketball so quickly and completely?

Including interviews with more than sixty of the key figures in the conference’s history, The Big East charts the league’s daring beginnings and its incredible rise. It transports fans inside packed arenas to epic wars fought between transcendent players, and behind locker-room doors where combustible coaches battled even more fiercely for a leg up.

Started on a handshake and a prayer, the Big East carved an improbable arc in sports history, an ensemble of Catholic schools banding together to not only improve their own stations but rewrite the geographic boundaries of basketball. As former UConn coach Jim Calhoun eloquently put it, “It was Camelot. Camelot with bad language.”

An excerpt from The Big East

“There would never be a Big East without him”

Giddy with success, Dave Gavitt and Mike Tranghese stepped outside and into the din of New York City. It was September 16, 1981, and the two men had just put the finishing touches to a $1 million deal with Madison Square Garden. In two years, their fledgling Big East Conference would play its tournament in the world’s most famous arena. The move was audacious, maybe even borderline harebrained. Then again, only a few years earlier some had thought the same of the very idea of the Big East Conference. But Gavitt, the league founder and commissioner, was undeterred, convinced a tournament in New York City would give his conference the verve and legitimacy it needed. With Tranghese, his aide-de-camp, at his side, he spent three meetings negotiating the deal with Sonny Werblin, the MSG president.

After the two sides finally hammered out the last of the details, Werblin invited the pair to stay the night as his guests. Tommy Hearns and Sugar Ray Leonard were meeting that night in a welterweight fight dubbed “The Showdown,” and Werblin had a spot to watch the fight. Gavitt preferred to head home to Rhode Island, but Tranghese, a huge boxing fan, begged his boss to stay. Gavitt agreed, and after the meeting the two wandered to the curb to hail a cab for a quick ride back to their hotel. Whereupon Gavitt, who had just brokered a $1 million deal, turned to Tranghese and asked, “Do you have any money?”

Some forty years later, Tranghese shakes his head as he recalls the memory. “I had $11 on me,” he says. “But this is Dave. Dave never had any money. He borrowed money from me all the time, and at the end of the month I would tell his wife, Julie, and she’d send me a check. Dave didn’t do details. Only big ideas.”

The man with the big ideas once concocted a doozy that changed the shape of a sport. It is impossible today to imagine college basketball without the Big East Conference; in 1979, it was equally impossible to imagine college basketball needed the Big East Conference. Only one man believed it did—Dave Gavitt. “There would never be a Big East without him,” says Syracuse coach Jim Boeheim. “I don’t care what anyone says. We were all against it. All of us. Only he could see the bigger picture.”

Gavitt was universally praised as brilliant, but his real gift lay in his people skills. Everyone loved him, and everyone trusted him. He was intelligent without being elitist, a networker but not a user, and a charmer but not a used car salesman. “A common man” is how Gavitt’s son, Dan, described his father, recalling a man who spoke with his hands and an Italian flair, despite his Irish and French Canadian heritage. He had a knack for talking to people, cajoling them almost. “Huddling”—that’s how Georgetown coach John Thompson, Jr., described Gavitt’s methods. Connecticut head coach Jim Calhoun says every time he saw Gavitt walking down the hall, he’d think, “Look at this, look at this, he’s coming down here and he’s smiling. I don’t want to hear what he’s going to tell me, but I know I’m going to say yes.”

The world felt smaller then, and certainly simpler. The basketball circle was especially tight, more like two degrees of separation than six. Gavitt came up in it, forging relationships and connections that carried him a lifetime, able to call on friends when he needed a favor. Dee Rowe, for example, would become UConn’s athletic development fund director and help steer the state school into the Big East. Long before that, though, he hired Gavitt as his assistant coach at Worcester Academy because Gavitt had played baseball at Dartmouth College for Tony Lupien, who just so happened to have been Rowe’s college coach at Middlebury. Similarly, as an assistant to Joe Mullaney at Providence College, Gavitt took an African American star out of D.C. under his wing, helping the big man ward off homesickness and an initial wish to transfer. Years later, as the congregation made its way to the gravesite for Gavitt’s funeral, that player—John Thompson, Jr.—pulled Gavitt’s son aside and told him, “One guy made me comfortable at Providence, and Joe Mullaney was not that guy. Your dad made me feel safe. He’s the only reason I stayed at Providence.”

Born in Westerly, Rhode Island, and raised in Peterborough, New Hampshire, Gavitt grew up with a ball in his hand. If he wasn’t the best player, he was the hardest-working. He played baseball and basketball at Dartmouth, a point guard and critical sixth man for Doggie Julian, the former Celtics coach, who headed up the Big Green. Teammates called Gavitt “The Mayor” because he gathered everyone around and led them, a skill set that would come in handy in adulthood.

The title Gavitt loved best was coach. Alongside his headstone in a Rhode Island cemetery sits a marker that reads “Coach Dave Gavitt.” “At the core, that’s who he was,” Dan Gavitt says. No surprise, then, that after graduating from Dartmouth, he immediately embarked on a coaching career, spending two seasons as Rowe’s assistant at Worcester Academy before joining Mullaney at Providence, and then doubling back to his alma mater as Julian’s assistant coach. Midseason Julian suffered a stroke, which propelled Gavitt into the head-coaching chair. The following season the new head coach was named New England Coach of the Year.

After Mullaney took the Los Angeles Lakers job in 1969, Gavitt jumped back to Providence, where he’d stay for ten seasons. He led the Friars to five NCAA Tournaments, including a memorable Final Four run in 1973. That surprising dash to the national semifinals not only affirmed Gavitt’s belief that the East Coast could be a player in the national hoops scene but showcased his people skills. Providence reached the Final Four despite troubled forward Marvin Barnes—appropriately nicknamed “Bad News” Barnes—attacking teammate Larry Ketvirtis with a tire iron during an in-season fight outside a dining hall. “Dave Gavitt got to the Final Four with Marvin Barnes, proving he could get along with anyone,” says reporter Charlie Pierce, who worked for several Boston-area newspapers in his career.

Gavitt added athletic director duties to his coaching duties beginning in 1971 before segueing into the gig for good in 1979. His background, as much as his abilities to cajole, gave him the credibility needed to get things done. Most of his peers knew him as a coach first—as one of their own—and thereby trusted him, even after he slid into an administrative role. Years later, in fact, when he became Big East commissioner (their boss, if you will), coaches frequently turned to Gavitt for advice on contract negotiations. “Commissioners don’t do that, but that’s what Dave did,” Tranghese says. “He was a basketball coach, and every guy in that league called him ‘Coach,’ not ‘Commissioner.’ He was Coach.”

Having played and coached basketball on the East Coast, Gavitt long believed his corner of the world would benefit from a conference to help restore its identity. At one time the Northeast had loomed large in college hoops, Madison Square Garden attracting teams from across the country to prove themselves on its court. The local teams, stuffed with local kids who’d honed their games on the playgrounds, more than held their own on the national stage. In 1950, City College of New York won both the NIT and the NCAA Tournament, back when the schedule allowed for such things.

But a year later, a point-shaving scandal rocked the game, sullying the city’s image. Seven schools would be implicated, including four New York schools (City College, Manhattan, NYU, and Long Island College), thirty-two players, and eighty-six games. CCNY would go from the highs of the double championship to banishment from the Garden, eventually dropping out of the Division I ranks altogether.

Into the void stepped schools in the South. The Atlantic Coast Conference grew as the East Coast declined, robbing New York of one of its own. After leading St. John’s to the Final Four in 1952, Frank McGuire, eyeing the decline of his region’s impact, left for the University of North Carolina. Players naturally followed.

Dana O’Neil, a senior writer at The Athletic, has been a sportswriter and national college basketball reporter for more than three decades, covering eighteen Final Fours. She covered her first Big East game in 1990 and has been a regular at the league’s press tables ever since. She has also worked at ESPN and the Philadelphia Daily News and has been honored with multiple writing awards. She served as the president of the U.S. Basketball Writers Association, only the second woman to lead the organization. A graduate of Penn State, she lives in Newtown, Pennsylvania, with her husband and two children.

Inside the Most Entertaining and Influential Conference in College Basketball History 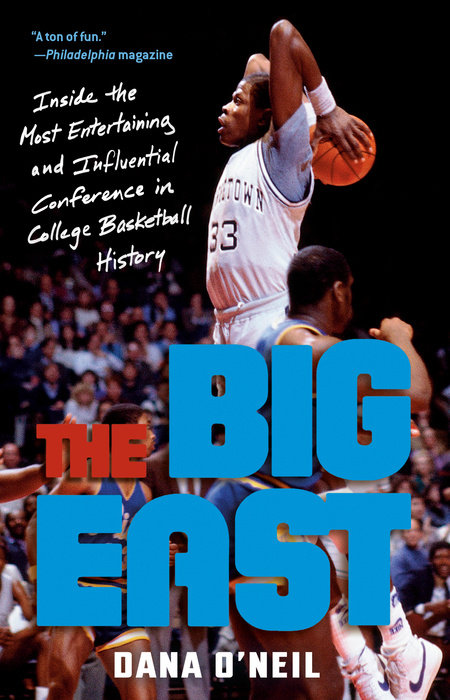