“A beautifully crafted novel that sits at the intersection of race and class, that flags the frank truth of the life of migrant workers for whom a flight to freedom can become the most finely woven trap.”—JODI PICOULT, #1 New York Times bestselling author of The Book of Two Ways

From the prize-winning author of The Beekeeper of Aleppo comes Songbirds, a stunning novel about the disappearance of a Sri Lankan domestic worker and how the most vulnerable people find their voices.

Living on the island of Cyprus, Nisha is far from her native Sri Lanka. Though she longs to return home, she knows that working as a “maid” for a wealthy widow is the only way to earn enough to support her daughter, left behind to be raised by relatives.

Yiannis is a poacher, trapping the tiny protected songbirds that stop in Cyprus as they migrate each year from Africa to Europe and selling them on the illegal market. He dreams of finding a new way of life, and of marrying Nisha.

But one night, Nisha makes dinner, an aromatic dahl curry, for the family who pays her: Petra and her daughter Aliki. Then, after she cleans the kitchen and tucks Aliki into bed, Nisha goes out on a mysterious errand, and vanishes.

When the police refuse to pursue the case, Petra takes on the investigation herself, a path that leads her to Nisha’s friends—other workers in the neighborhood—and to the darker side of a migrant’s life, where impossible choices leave them vulnerable, captive, and worse.

Inspired by the real-life disappearance of domestic workers in Cyprus, Christy Lefteri has crafted a poignant, deeply empathetic narrative of the human stories behind the headlines. With infinite tenderness and skill, Songbirds offers a triumphant story of the fight for truth and justice, and of women reclaiming their lost voices.

An excerpt from Songbirds

One day, Nisha vanished and turned to gold. She turned to gold in the eyes of the creature that stood before me. She turned to gold in the morning sky and in the music of the birds. Later, in the shimmering melody of the maid from Vietnam who sang at Theo’s restaurant. Later still, in the faces and voices of all the maids that flowed along the streets like a turbulent river of anger, demanding to be seen and heard. This is where Nisha exists. But let’s go back. We need to go back.

The day Nisha disappeared we went to the mountains. The three of us put on our hiking boots and waited for the bus that goes up to Troodos, which comes just twice a day. Nisha would normally go out on her own on Sundays but this time, for the first time, she decided to come along with Aliki and me.

Oh, it was beautiful up there! The autumn mist mingled with the ferns and pines and twisted oaks. These mountains rose from the sea when the African and European tectonic plates collided. You can even see the Earth’s oceanic crust. The rock formations, with their veins and lava pillows, look like they are wearing snake skins.

I love thinking about beginnings. Like that story my aunt used to tell in the back garden: When the Creator finished his creation of the world—­Petra, are you listening?!—­he shook the remaining clumps of clay from his hands and they fell to the sea and formed this island.

Yes, I love thinking about beginnings. I don’t like endings, though I suppose I’m like most people in that. An ending can be staring you right in the face without your knowing it. Like the last cup of coffee you have with someone when you thought there would be many more.

Aliki played with leaves as Nisha and I sat beneath the heater at one of the small taverns on the trail we were taking, and drank coffee. I remember the conversation we had.

Nisha had been unusually quiet, stirring her coffee for some time without drinking it. “Madam,” she said, suddenly, “I have a question to ask.”

I nodded and waited while she shifted in her seat.

“But Nisha, you had the whole day off!”

She didn’t speak again for a while. Aliki was gathering armfuls of the leaves and placing them on a bench. We both watched her.

Nisha had decided to spend her free day with us, to join Aliki and me on this trip. I shouldn’t be expected to give her more time off.

“Nisha,” I said, “you have all day off on Sunday. In the evening, you have things to do. You need to help Aliki get her bag ready for school, and then put her to bed.”

“Madam, many of the other women have Sunday night off too.” She said this slowly.

“I know for a fact that other women are not allowed to go gallivanting around at night.”

She acted like she hadn’t heard this and said, “And I don’t think madam has plans tonight,” giving me a sly look before returning her gaze to the coffee. “So maybe madam could put Aliki to bed just for tonight? I will do extra duties next Sunday to make up for it.”

I was about to ask her where she intended to go; what was so important that she was willing to disrupt our routine. Perhaps she saw the disapproving look in my eyes, but there was no time for either of us to say anything because at that moment an avalanche of leaves was released over our heads. Nisha screeched, making a pantomime of it, waving her hands in the air and chasing Aliki, who was slipping away down a path that led into the woods. I could hear them after a while in the forest, like two children, laughing and playing, while I drank my coffee.

By the time we got home that evening, Nisha hadn’t mentioned again taking the night off. She made dhal curry, and the house filled with the smell of onions and green chilies, cumin, turmeric, fenugreek, and curry leaves. I looked over her shoulder as she sautéed the onions and combined the spices with the split red lentils, finally adding a splash of coconut milk. My mouth was watering. Nisha knew this was my favorite dish. I lit the fire in the living room. It had rained earlier that afternoon and from the living-­room window I could see that Yiakoumi opposite had his canopy open, and the cobbled streets glimmered beneath the warm lights of his antiques shop.

We do not have central heating, so we sat as close as we could to the flames with the bowls of dhal curry on our laps. Nisha brought me a glass of sweet zivania—­the aromatic type with caramel and muscat, so warming on this chilly night—­and tested Aliki on the nine times table.

“Eighty-­one! And there’s no point in doing this.”

“But you haven’t practiced.”

“I don’t need to. You just have to see the pattern. If you ask me what seven times nine is, I will know that the answer begins with a six. I know that the second number is always one lower than the previous one. So, eight times nine is seventy-­two.”

“You’re too cheeky for your own good, you know? I’m going to test you anyway.”

“Go ahead. If it helps you.” Aliki sighed and shrugged as if she had resigned herself to this pointless fate of learning something that she already knew. She had every bit the spunk of a nine-­year-­old girl.

Yes, I remember it all very well, the way that Aliki was munching and yawning and shouting out the answers, the way that Nisha kept her attention on my daughter, saying hardly a word to me. The TV flickered in the background. The news was on with the volume turned low: footage of refugees rescued by coast guards off one of the Greek islands. An image of a child being carried to the shore.

I would have forgotten all of this, but I have been over it again and again, like retracing footsteps in the sand when you have lost something precious.

Aliki lay on her back and kicked her legs up in the air.

“Sit up,” Nisha scolded, “or you will be sick in your mouth. You’ve just eaten.” Aliki made a face but she listened: she perched on the sofa and watched TV, her eyes moving over the faces of people as they trudged out of the water.

Nisha refilled my glass for the third time, and I was starting to get sleepy. I looked at my daughter then; a monster of a child, she’s always been too big for me, even her curly hair is too thick for me to get my hands around. Curls so thick, like the tentacles of an octopus; they seem to defy gravity, as if she lives in an underwater world.

In the light of the fire, I noticed that Nisha’s face was pale, like one of those figs blanched in syrup that have lost their true color. She caught my eye and smiled, a small, sweet smile. I shifted my gaze over to Aliki.

“Do you have your bag ready for school?” I asked.

Aliki’s attention was on the screen.

“We are doing it now, madam.” Nisha got up hastily, gathering the bowls from the coffee table.

My daughter never really spoke to me anymore. She never called me Mum, never addressed me. At some point a seed of silence had been sowed between us and it had grown up and around and between us until it became almost impossible to say anything. Most of the time, she would talk to me through Nisha. Our few conversations were functional.

I watched Nisha as she licked a handkerchief and wiped a stain off Aliki’s jeans and then took the bowls and spoons to the kitchen. Maybe it was the alcohol, or the trip up to Troodos, but I was feeling more tired than usual, a heaviness in my mind and my limbs. I announced that I was going to bed early. I fell asleep straightaway and didn’t even hear Nisha putting Aliki to bed.

Brought up in London, Christy Lefteri is the child of Cypriot refugees. She holds a PhD in creative writing from Brunel University where she is now a lecturer. Her previous novel, the international bestseller The Beekeeper of Aleppo, won the Aspen Words Literary Prize and was the runner-up for the Dayton Literary Peace Prize. Her first novel, A Watermelon, a Fish and a Bible, was longlisted for the IMPAC Dublin Literary Award. 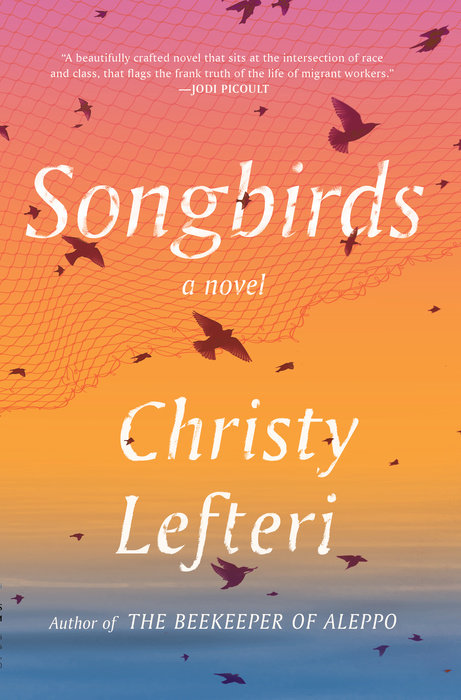