In this “genius” (Claire Saffitz) cookbook, the “legendary pastry chef” (Eater) invites you into her home kitchen with 140+ sweet and savory recipes she perfected for friends and family.

“A home baker’s fantasia . . . [Fans] have been waiting twenty-one years for a follow-up to her equally legendary first book, The Last Course. The wait was worth it.”—Eater

ONE OF THE BEST COOKBOOKS OF THE YEAR: The New York Times, Saveur, Los Angeles Times

In Claudia's first cookbook, a culinary classic, she shared recipes from the menus at Gramercy Tavern that introduced home cooks to her sophisticated, classically inspired seasonal desserts and pastries and established a standard in pastry kitchens across the country. Now Claudia is offering a new collection of recipes all developed and tweaked in her own small kitchen. Baking at home, Claudia brings her characteristic style and skilled approach to every sweet and treat, along with an ease with culinary history, and a growing connection to her own family traditions. A mix of classic favorites and new explorations, including her first foray into savory recipes for savory baking, each delicious dish is the work of a master in her prime.

Claudia's knowledge and facility, refined over a storied career in pastry, mark these more casual, desserts and savory bites. Her thoughtful essays on subject ranging from working with yeast to a professional’s approach to frosting a layer cake, reflect her intention to share all she knows. With more than 140 recipes, the book is organized into chapters including:

Making simple preparations truly delicious is a challenge Claudia Fleming has always embraced. With Delectable, she continues to set the standard for pastry chefs and home bakers alike.

An excerpt from Delectable

A lot has changed since I wrote my first cookbook, The Last Course, more than twenty years ago. One thing that hasn’t is my fascination with the world of baking. Breads, cakes, pies, and cookies occupy a special place in the culinary realm, distinguished by the fact that fancy and rustic sit side by side—centuries-old recipes alongside novel creations. As a professional pastry cook, I share a lot with bakers. We use the same ingredients, have a common tool box, and our related branches of the culinary family both benefit from a deft touch. Mastering the proper ratios, managing things just so, and heating to the right temperature are all necessary to avoid disappointment. This is true in cooking generally, but the opportunities for transformation are more extreme and margins thinner when you are playing with flour, sugar, and eggs. That test of skill draws me, but alone it has never been enough. I want to touch people with my cooking, to strike resonant chords. I hope each dish I prepare—elaborate or not—links to something deep inside. I am a pastry cook, a composer of desserts by trade, but baking inspires me.

Because my career has shaped and defined me, it was no real surprise that I felt anxious when it came time to say goodbye to my restaurant after fourteen years. I worried I might be leaving not only the North Fork Table and Inn behind but an important piece of myself as well. The sale was necessary. I wanted a change and needed time—hard to find in a life defined by long workdays. In January of 2020, when the sale was done, I hoped to travel. I did, but not for very long. I yearned for adventure but missed order and soon settled into a routine at home, firing up my anything-but-fancy oven to bake ingredients I bought at my not particularly well-stocked local grocery. I started by “tweaking” old recipes, fiddling until I felt completely pleased with them, then I moved on to cooking things I never had. At some point—I can’t say when—I realized my practice of baking at home was just what I needed.

I had been at it for almost two months when the world sputtered to a halt. I was fortunate to be spared the hard decisions my friends in the restaurant business coped with during the unfolding pandemic. I never had to let people go because infection rates made operating a restaurant impossible. I could just keep on doing what I had recently begun, cooking at home by myself, happy to have my time organized by refining recipes, hoping the effort would lead to my next step and turn into a collection I could share. Weeks became months and I kept at it. Along the way, a new relationship to my food developed. I was lightened by what evolved into a freewheeling approach to my craft. I felt renewed, even as I rolled out time-tested doughs and poured favorite batters.

I made chocolate-covered-marshmallow cookies modeled after my dad’s favorite snack. I had served them at the North Fork Table and now cooked them for friends. I added salted peanuts to the chocolate caramel tart I developed at Gramercy Tavern and liked it even better. As is my habit, I followed the seasons, baking with rhubarb and strawberries, peaches, then plums, quince, and apple, putting the fruit in pies, piling berries on cakes, and spooning preserves onto cookies. When I wanted a challenge, I would take on things I’d never attempted. I made pretzels and then batches of sticky buns filled with shiitakes. A gift of squash blossoms stirred me to make a tart. It was stimulating to cook this way and very gratifying to be able to head to a neighbor’s with focaccia or a crostata during a time when it was easy to feel isolated.

In the summer, I longed for good, homemade ice cream. I don’t have a machine, so I started making semifreddos. I experimented with different techniques and lots of flavors. I made some tasty ones, stacked three, and found I had made a dessert that reminded me of spumoni, something I hadn’t had since I was a kid.

My mother’s parents came to New York from Caltanissetta in Sicily. An excellent cook, my mom passed on her love of the flavors she’d grown up with. I thought of her more and more often as I cooked at home. I made an eggplant caponata tart and then an escarole pie. I baked taralli (a batch of fennel, then pecorino, and then another flavored with pancetta) and made dozens of pizzelles and pignoli cookies. I worked out my own adaptation of a Sicilian cassata and baked a more-or-less traditional pastiera—“grain pie”—a sweet ricotta dessert we ate every Easter. It was as though I’d found a source of inspiration that had just been waiting for the right moment to be tapped, so I delved deeper, comforted by the feeling that I had time, my goals and inspirations shifting over the course of a year.

The sweet and savory treats I made in my kitchen were not nearly so elegant as the food I’ve served in restaurants, but, like those dishes, each was intentional, and carefully wrought—the product of an effort to make things taste not just as good as you’d imagine but even better. Making stripped-down preparations truly delicious is a challenge I have always embraced. Cooking on my little electric stove imposed new limits, but working one recipe at a time, by myself, at my own pace, afforded unanticipated opportunities to get things precisely how I wanted them. While I’d never claim to have produced the ultimate version of anything, I did get the recipes I worked through to a place that satisfied me, and I was delighted to see them eaten with joy.

My home stay is now behind me (at least for the moment). I am glad to be back at work, but I don’t want to forget what I felt, learned, and produced during my time baking solo. So, I’ve gathered the recipes that resulted from my meanderings, along with thoughts on how to make each one well. The following pages provide maps that will lead to tasty food—a delicious end in itself—but I hope you find, as I did, that the process, too, is worth savoring. For me, it proved both heartwarming and soul-sustaining.

Claudia Fleming is a pastry chef, restaurateur, and author. She has worked in New York restaurants such as Union Square Cafe, Montrachet, TriBeCa Grill, and Gramercy Tavern, and at Fauchon in Paris. Fleming and her husband, chef Gerry Hayden, opened The North Fork Table & Inn in Southold, New York. She is currently executive pastry director at Union Square Hospitality Group. Fleming has been named Outstanding Pastry Chef by the James Beard Foundation, and her recipes have appeared in publications such as Town & Country, Martha Stewart Living, and Vogue. Fleming has appeared on Barefoot Contessa and Beat Bobby Flay and served as a judge on Chopped and Top Chef: Just Desserts. She lives in New York City and Long Island’s North Fork. 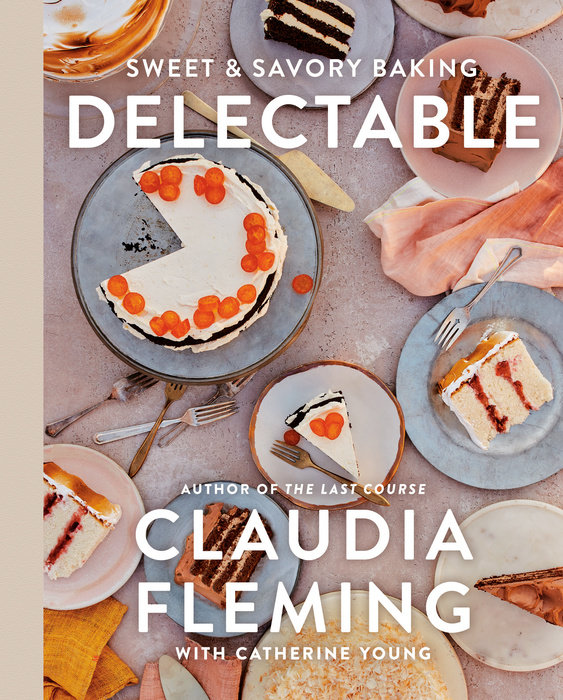