A Memoir of Healing from Complex Trauma

A searing memoir of reckoning and healing by acclaimed journalist Stephanie Foo, investigating the little-understood science behind complex PTSD and how it has shaped her life

“Achingly exquisite . . . providing real hope for those who long to heal.”—Lori Gottlieb, New York Times bestselling author of Maybe You Should Talk to Someone

ONE OF THE MOST ANTICIPATED BOOKS OF 2022—She Reads

By age thirty, Stephanie Foo was successful on paper: She had her dream job as an award-winning radio producer at This American Life and a loving boyfriend. But behind her office door, she was having panic attacks and sobbing at her desk every morning. After years of questioning what was wrong with herself, she was diagnosed with complex PTSD—a condition that occurs when trauma happens continuously, over the course of years.

Both of Foo’s parents abandoned her when she was a teenager, after years of physical and verbal abuse and neglect. She thought she’d moved on, but her new diagnosis illuminated the way her past continued to threaten her health, relationships, and career. She found limited resources to help her, so Foo set out to heal herself, and to map her experiences onto the scarce literature about C-PTSD.

In this deeply personal and thoroughly researched account, Foo interviews scientists and psychologists and tries a variety of innovative therapies. She returns to her hometown of San Jose, California, to investigate the effects of immigrant trauma on the community, and she uncovers family secrets in the country of her birth, Malaysia, to learn how trauma can be inherited through generations. Ultimately, she discovers that you don’t move on from trauma—but you can learn to move with it.

Powerful, enlightening, and hopeful, What My Bones Know is a brave narrative that reckons with the hold of the past over the present, the mind over the body—and examines one woman’s ability to reclaim agency from her trauma.

An excerpt from What My Bones Know


“Do you want to know your diagnosis?”

I blink and stare at my therapist. She gazes at me from her serene office, where sunshine glows through her gauzy curtains, birdsong bursts through the windows, and one of those little fountains with a giant marble on it burbles, which I guess is supposed to be relaxing. In the back of the room is a framed copy of the poem “Desiderata.” You are a child of the universe, no less than the trees and the stars; you have a right to be here.

But I’m not really here. My therapist’s warm office is in San Francisco, and I am in my dark, freezing, six-by-six-foot office in New York City, talking to her through a small window on my computer. The reason I know about the poem in her office is the same reason I can’t believe she is only telling me my diagnosis now: I’ve been her client for eight years.

My sessions with my therapist, whom I’ll call Samantha, began when I was twenty-two, when I lived in San Francisco and needed help with a very San Francisco problem: an INTJ tech-nerd boyfriend. I lucked out with Samantha. She was acerbic and clever but loving. She’d always make time for an emergency session after a breakup and even bought me a beautiful leather-bound travel journal before my first solo trip abroad. My sessions with her quickly moved beyond boy talk, and we began discussing my monthslong bouts of depression and my constant anxiety around friendships, work, and family. I loved her so much that I kept seeing her via Skype after I moved across the country to New York when I was twenty-six.

Our session today begins with me complaining about my lack of focus. Samantha asks me to do some positive visualizations and suggests I picture myself in a safe space, as a powerful being, full of light. I try half-heartedly, but I always feel corny doing this stuff. Then, as she does every week, she tells me not to be so hard on myself. “I’m sure you’re being more productive than you’re letting on,” she says, ignoring my eye rolls. “I’ve seen you pull yourself out of depressions like this before. I know you can pull yourself up out of this one.”

But that’s exactly the problem. I’m tired of pulling. I don’t want to pull anymore. I want a dumbwaiter, or an escalator, or a floating rainbow drug cloud. Anything to lift me toward emotional stability. To fix me. I’ve suffered from anxiety and depression since I was twelve years old. The pain is a fanged beast that I’ve battled a hundred times throughout the years, and every time I think I’ve cut it down for good, it reanimates and launches itself at my throat again. But in recent years, I’d convinced myself that this battle was completely pedestrian. I mean, twentysomething millennials are all really stressed out, aren’t they? Isn’t depression just shorthand for the human condition? Who isn’t anxious here in New York, the capital of neuroticism?

That is, until I turned thirty. One by one, I’d watched my erratic friends hit thirty and quickly become adults. They reported that they had less energy, so they stopped caring as much about what other people thought and settled into themselves. Then they bought beige linen pants and had babies. I’ve waited for that mature, elevated calm, but my thirtieth birthday was months ago, and if anything, I care more than ever. I care about shopping cart placement and plastic in the oceans and being a good listener. I care about how I seem to f*** everything up all the time. I care and I care, and I hate myself for it.

My friends got one thing right, though: I’m so tired now. Thirty years on this earth, and I’ve been sad at least half that time.

On my subway rides to work, I stare at the supposedly neurotic masses—who are calmly staring at their phones—and think: Maybe I’m different from them? Maybe something is wrong with me? Something big. In the past week, I’ve been scrolling through various mental illnesses on WebMD, searching for symptoms that sound familiar to find an answer.

Now, near the end of my session with Samantha, after we’ve exhausted the usual pep talks and affirmations, I gather up my courage to ask about my internet diagnosis. “Do you think I’m bipolar?”

Samantha actually laughs. “You are not bipolar. I am sure of it,” she says. And that’s when she asks, “Do you want to know your diagnosis?”

I don’t yell, “Lady, I’ve been seeing you for a f***ing decade, yes I want to know my goddamn diagnosis,” because Samantha taught me about appropriate communication. Thanks, Samantha.

Something in her jaw becomes determined, and her gaze is direct. “You have complex PTSD from your childhood, and it manifests as persistent depression and anxiety. There’s no way someone with your background couldn’t have it,” she says.

“Oh. Yeah, PTSD.” Post-traumatic stress disorder. I had a crappy childhood, so I kinda figured that.

“Not just PTSD. Complex PTSD. The difference between regular PTSD and complex PTSD is that traditional PTSD is often associated with a moment of trauma. Sufferers of complex PTSD have undergone continual abuse—trauma that has occurred over a long period of time, over the course of years. Child abuse is a common cause of complex PTSD,” she says. Then her eyes drift to the corner of the screen. “Oh—we’re out of time! Let’s continue this next week.”

The first thing I do after our Skype window closes is bring up Google. I’ve never heard of complex PTSD. Surprisingly, there aren’t that many results. I go from Wikipedia to a government page about C-PTSD as it relates to veterans. I read the list of symptoms. It is very long. And it is not so much a medical document as it is a biography of my life: The difficulty regulating my emotions. The tendency to overshare and trust the wrong people. The dismal self-loathing. The trouble I have maintaining relationships. The unhealthy relationship with my abuser. The tendency to be aggressive but unable to tolerate aggression from others. It’s all true. It’s all me.

The more I read, the more every aspect of my personhood is reduced to deep diagnostic flaws. I hadn’t understood how far the disease had spread. How complete its takeover of my identity was. The things I want. The things I love. The way I speak. My passions, my fears, my zits, my eating habits, the amount of whiskey I drink, the way I listen, and the things I see. Everything—everything, all of it—is infected. My trauma is literally pumping through my blood, driving every decision in my brain.

It is this totality that leaves me frantic with grief. For years I’ve labored to build myself a new life, something very different from how I was raised. But now, all of a sudden, every conflict I’ve encountered, every loss, every failure and foible in my life, can be traced back to its root: me. I am far from normal. I am the common denominator in the tragedies of my life. I am a textbook case of mental illness.

Well, this explains it all, I think. Of course I’ve been having trouble concentrating on my work. Of course so many people I’ve loved have left. Of course I was wrong to think I could walk into fancy institutions full of well-bred, well-educated people and succeed. Because the person with C-PTSD, the person who is painted here on the internet, is broken.

The orange walls of my office close in on me. I don’t belong here. I don’t belong anywhere. I try to stay another couple of hours at my desk in a desperate attempt to prove to myself that I am capable of a full workday, but I can’t see my computer screen. My co-workers, laughing outside my door, sound like jackals. I grab my coat and rush out of the building, into the cold air, but even outside, I haven’t escaped. With every step, one word echoes in my head: Broken. Broken. Broken.

For ten years I thought I could outrun my past. But today I realize that running isn’t working. I need to do something else.

I need to fix this. Fix myself. To revisit my story, one that has until now relied on lies of omission, perfectionism, and false happy endings. I need to stop being an unreliable narrator. I need to look at myself, my behaviors, and my desires with an unflinching, meticulous eye. I need to tease apart the careful life I have crafted for myself, the one that is threatening to unravel at any minute.

And I know where I have to begin.

Every villain’s redemption arc begins with their origin story.

Stephanie Foo is a writer and radio producer, most recently for This American Life. Her work has aired on Snap Judgment, Reply All, 99% Invisible, and Radiolab. A noted speaker and instructor, she has taught at Columbia University and has spoken at venues from Sundance Film Festival to the Missouri Department of Mental Health. She lives in New York City with her husband.

A Memoir of Healing from Complex Trauma 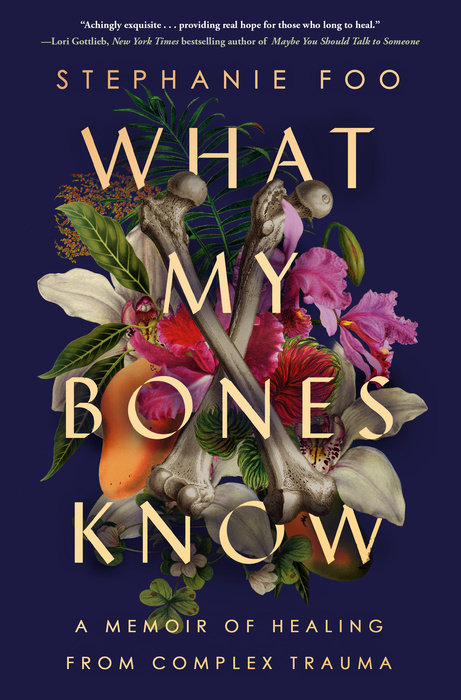