NEW YORK TIMES BESTSELLER • From an award-winning journalist at The Atlantic, these searing essays make a powerful case that “real hope lies not in a sunny nostalgia for American greatness but in seeing this history plain—in all of its brutality, unadorned by euphemism” (The New York Times).

NAMED ONE OF THE BEST BOOKS OF THE YEAR BY NPR • “No writer better demonstrates how American dreams are so often sabotaged by American history. Adam Serwer is essential.”—Ta-Nehisi Coates

Featuring additional elements: essays on how the Supreme Court undermines justice, and a new epilogue that connects the post-reconstruction narrative with today’s political discourse

To many, our most shocking political crises appear unprecedented—un-American, even. But they are not, writes The Atlantic’s Adam Serwer in this prescient essay collection, which dissects the most devastating moments in recent memory to reveal deeply entrenched dynamics, patterns as old as the country itself. The January 6 insurrection, anti-immigrant sentiment, and American authoritarianism all have historic roots that explain their continued power with or without President Donald Trump—a fact borne out by what has happened since his departure from the White House.

Serwer argues that Trump is not the cause, he is a symptom. Serwer’s phrase “the cruelty is the point” became among the most-used descriptions of Trump’s era, but as this book demonstrates, it resonates across centuries. The essays here combine revelatory reporting, searing analysis, and a clarity that’s bracing. In this new, expanded version of his bestselling debut, Serwer elegantly dissects white supremacy’s profound influence on our political system, looking at the persistence of the Lost Cause, the past and present of police unions, the mythology of migration, and the many faces of anti-Semitism. In so doing, he offers abundant proof that our past is present and demonstrates the devastating costs of continuing to pretend it’s not. The Cruelty Is the Point dares us, the reader, to not look away.

An excerpt from The Cruelty Is the Point

The Cruelty of Backlash

Many people woke up on November 9, 2016, feeling like their country hated them.

Donald Trump had run a campaign that, from its inception, sought to blame those he defined as foreigners for the failures of modern society. He announced his campaign by declaring that Mexican immigrants were “rapists” “bringing drugs” and “crime.” He called for “a total and complete shutdown of Muslims” entering the United States and regaled campaign audiences with apocryphal tales of how dipping bullets in pigs’ blood had helped Americans suppress a Muslim insurgency in the Philippines. He decried the “war on police,” calling for “nationwide stop and frisk” and comparing black American neighborhoods unfavorably to “war zones.” Every one of these problems, Trump assured his supporters, could be solved with the ruthless application of state force: arrest, execution, exclusion, or expulsion. And then just short of a majority of 2016 voters, more than 60 million people, decided to put him in charge of the country.

If you were part of, or related to, one of the groups Trump targeted so effectively, you woke up on November 9 with the knowledge that some, perhaps many, of your work colleagues, perhaps your friends and family members, chose a man who promised to use the violence of the state to keep people like you in your place.

My mother and uncle were born into the long shadow of Redemption, the white-­supremacist backlash to Reconstruction, in Florida. During Reconstruction, Southern states like Florida briefly experimented with multiracial democracy, only to fall into the shadow of racial authoritarianism in the 1870s. In the 1940s, when my mother was born, Florida was a Jim Crow state. Black voters were disenfranchised by law, schools, public transportation, and restaurants were segregated, and interracial marriage was banned. All of these laws were backed by the threat of both state and vigilante violence, in a state where more than three hundred Americans would be lynched between 1877 and 1950.

Like many other black southerners in that era, my grandparents packed up and fled north, settling in New York State, where their children would not have to attend segregated schools. What they also brought with them was the memory of racial backlash—­the knowledge that previously unimaginable progress like that of the South during Reconstruction could be attained and then quickly destroyed. If a black president seemed the stuff of fiction prior to Obama, the racial backlash that followed—­the election of a president who rose to power on the slander that the first black president was not even an American citizen—­was all too familiar.

I wrote “Is This the Second Redemption?” shortly after the 2016 election results, with the knowledge that this backlash would not be as complete as the one that followed Reconstruction. Unlike the backlash of the late 1870s, Trump had won because his support was ideally geographically distributed for the electoral college, not because he had commanded support from a majority of the electorate. Trumpism did not command anything close to the political consensus among white Americans that white supremacy did at the close of the nineteenth century.

Nevertheless, he had been elected to destroy Obama’s legacy, and for those Americans who were not as familiar with this chapter in America’s past, I felt that Redemption was a useful analytical frame for what the future might hold. These family legacies are obviously not necessary to understand American history. But in a country where the typical education consciously elides the dark currents of our past, or portrays them as long vanquished, the living memories of your flesh and blood provide a potent counternarrative.

Unfortunately, much—­though not all—­of what I de­­scribed in this essay was prescient. The Civil Rights Division under Trump filed a single voting-­rights case in four years, and his Commerce Department tried and almost succeeded in deliberately using the census to increase white voting power at minority voters’ expense. The Trump Justice Department abandoned systemic oversight of police departments, while the president himself vocally encouraged police brutality to audiences of officers who responded with applause. Migrant youth were deliberately separated from their parents and placed in squalid camps, for the express purpose of torturing such families into giving up their hope for a better life in America. The conservative-­controlled Supreme Court blessed Trump’s travel ban targeting Muslim countries once the administration removed explicit language referencing religion. In doing so, the right-­wing justices wrote the blueprint for Trump-­era discrimination: Even when the president announces his bigoted intentions to the world, the Supreme Court will turn a blind eye as long as the lawyers can provide a neutral-­sounding pretext and adequate legal paperwork. But Trump’s bluster and cruelty were sometimes a disadvantage. Republicans’ attempt to repeal the Affordable Care Act—­which was responsible for ensuring coverage for tens of millions of people—­failed by a single vote, that of Senator John McCain, Obama’s 2008 rival and a frequent target of Trump’s insults.

Trump’s defeat in the 2020 election may take the country in a new direction, but his lingering grip on his party suggests Trumpism will endure. The former president’s most recent campaign was notable for shifting his rhetorical focus from enemies abroad to enemies within, making other Americans internal foreigners with no legitimate claim to govern. This too is an old American strain of thought—­in the ransacking of the Capitol in early January 2021, one can still see the echoes of Redemption, repeated as both tragedy and farce. It was the first time that a sitting president had encouraged a mob to attack the legislature in an attempt to overturn an election. But throughout the South in the late nineteenth century, scenes of insurrectionary political violence were common. As with the so-­called Redeemers, defeat at the ballot box may inspire further violence in pursuit of political dominance.

Is This the Second Redemption?

Between 1870 and 1901, there were twenty black representatives in Congress and two black United States senators. Between 1901 and 1929, there were none

Those simple numbers offer a small glimpse of the totality of the Southern counterrevolution against Reconstruction after the Civil War and the subsequent bloody Southern Redemption, after which the political power of black Southerners was effectively extinguished. The radical dream of an interracial politics, with its attendant federal investment and redistribution of resources toward the poor, had been destroyed. The optimism of emancipation leading to racial equality in the South was annihilated with a completeness that is difficult to fathom.

Southern Redemption had been led by white Democrats and their paramilitary allies, but crucial to their decisive victory was the willingness of the Republican Party to abandon black Southerners to their fate. “Many Northern Republicans also hoped to use the crisis to jettison a Reconstruction policy they believed had failed,” wrote historian Eric Foner in Reconstruction. “The freedmen, insisted former Ohio Gov. Jacob D. Cox, must moderate their ‘new kindled ambition’ for political influence and recognize that they lacked whites’ ‘hereditary faculty of self-­government.’ Ulysses S. Grant, who had sent federal troops into the South to suppress the Ku Klux Klan, privately concluded that the 15th Amendment, adopted to protect the freedmen’s right to vote, had been a ‘mistake.’ ”

The notion that Trump’s victory and the perception that society must be “redeemed” have nothing to do with a racist backlash might be comforting, but they fly in the face of available statistical evidence.

Adam Serwer has been a staff writer for the Ideas section of The Atlantic since 2016, focusing on contemporary politics, often viewed through the lens of history. He is the recipient of the 2015 Sigma Delta Chi award for commentary, the 2019 Salute to Excellence award for commentary from the National Association of Black Journalists, and the 2019 Hillman Prize for opinion journalism. He lives in San Antonio, Texas, with his family. 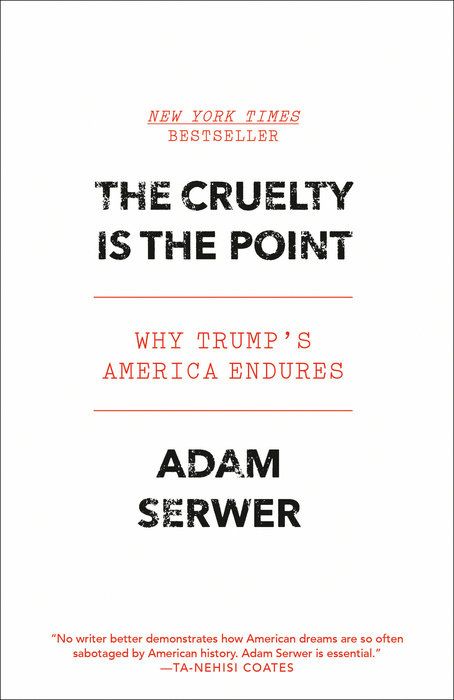