A “witty and wise” (People) debut novel about love and commitment, celebrity and obsession, poetry and reality TV.

Reeling from a breakup with his almost fiancée, the narrator of Andrew Palmer’s debut novel returns to his hometown in Iowa to house-sit for a family friend. There, a chance flick of the TV remote and a new correspondence with an old friend plunge him into unlikely twin obsessions: the reality show The Bachelor and the Pulitzer Prize–winning poet John Berryman. As his heart begins to mend, his fascination with each deepens, and somewhere along the way, representations of reality become harder and harder to distinguish from real life. Soon he finds himself corresponding with multiple love interests, participating in an ill-considered group outing, and trying to puzzle through the strange turn his life seems to have taken.

An absorbing coming-of-age tale “that marks the debut of a significant talent” (Kirkus Reviews, starred), The Bachelor approaches—with wit and grace—the high-stakes questions of an overconnected world: If salvation can no longer be found in fame, can it still be found in romantic relationships? In an era of reality TV, where does entertainment end and reality begin? And why do we, season after season, repeat the same mistakes in love and life?

An excerpt from The Bachelor

Not long after I moved into the mostly empty house of a friend of my mother’s in northwest Des Moines, near the dead end of the street I grew up on, in order to reset my life or retire quietly from it, I discovered on the satellite television service channel 665, “home of your Chicago Bulls.” I started tuning in to every game. I didn’t ask myself why I watched. I watched because for the two and a half hours it took for the forty-eight minutes of each game to elapse, I knew exactly how to feel: removed from myself into hope and joy when the Bulls were winning, full of almost comforting anxiety when they weren’t. These automatic responses took root further back than I can remember; they’re as much who I am as anything. My family never had cable when I was a kid—my parents once told me they would have gotten it but they knew if they did I’d lose my childhood to ESPN (they were right, as usual)—so the occasional Sunday afternoon NBC telecast was all I could watch of the Jordan-Pippen-era Bulls, from whom I learned everything I know about heroism. When I started watching Bulls games again at my mother’s friend’s house, after living without a TV for more than a decade, those distant, wide-open afternoons returned to me, and, though I would soon be a thirty-year-old man, I felt something of the annihilating sweetness of childhood. This sensation was no doubt heightened by my familiarity with the telecasters, Stacey King and Neil Funk. King had been a mediocre but enthusiastic reserve on the Bulls’ first three championship teams, whose radio broadcasts, called by Funk, I used to love to listen to, lying on the bristly orange living-room carpet in front of my parents’ enormous speakers, or probably enormous only in memory, whenever an especially meaningful game failed to reach our little TV screen.

And so it was strange to reencounter Funk and King allied in this new way, but before long their partnership grew to seem natural, and I came to look forward not only to watching the usual miracles of semi-choreographed human movement, but to listening to Funk, in his grating Chicago accent, ooze derision toward the Bulls’ opponents (“Is it me or does something stink in this gym?”), and to King shout his silly catchphrases (“Pressure bursts pipes!”). They were terrible telecasters. Several times each game their narration of a play would be contradicted by the footage itself: “That right there is a clean block,” for example, as I witnessed what was plainly a heinous mauling; or “Inbound on the baseline,” as a player inbounded from the sideline; or—more than once—“Short,” as a shot flew long. It was as if they and I were watching different games.

In any case, by January 2011 the Bulls were among the best teams in the NBA for the first time since Jordan left them for good in ’98, and I could root for them again with the assurance that more games than not I’d be rewarded with a brief respite from my malaise. From time to time it unnerved me, though, to see these unfamiliar men in the red and white jerseys that had loomed so large in my childhood dreamscape, and I couldn’t shake the sense that these new Bulls were impostors.

Sometimes as I sat there in front of the vast flat-screen, I felt as though I’d fallen out of myself, free to watch this solitary man reclining on an overstuffed couch in a stranger’s house, sinking so deep into its forest green cushions he seems on the verge of disappearing into its softness, never to be seen or heard from again. Watching myself watch my Chicago Bulls, a great sense of release coursed through me, as though my body were ridding itself of some previously undetected foreign object, something hard, jagged, and compact that had been lodged deep within me for many years. I felt wonderfully susceptible, calm, almost content. That I felt almost miserable doesn’t mean that I couldn’t also feel almost content. I waited for the almosts to drop away. The smallest action, the slightest change of mind or mood, just might be the door through which would enter some big definitive feeling or idea. In this way my life was full of suspense.

At first I didn’t change the channel during commercials, whose strategy of tricking me into buying things via immaculately crafted thirty-second comedy skits struck me as terrifying and hilarious, a lot funnier than the skits themselves, but they soon lost their novelty and I started switching over to PBS, bow-tied antiques dealers or Peruvian birds of paradise or actors reading Andrew Jackson letters with echo effects. One early January evening I was watching the Bulls play the Toronto Raptors at the United Center in Chicago, where my father and I used to drive once a year to see a game when I was a teenager. Chris Bosh had left the Raptors the previous summer to join Wade and LeBron in Miami. Everyone hated him for this but he seemed thoughtful and kind and everyone should get to decide where they live, and so I felt defensive on his behalf, vaguely. Without him the Raptors were very bad. Their players hailed from seven different countries. Toronto is a city that takes pride in its multiculturalism. Ashwini, my ex-fiancée, though we were never actually engaged, whose parents grew up on premodern farms in unimaginably lush southern India, grew up in a northern suburb of Toronto, and I was trying not to think about the three months I’d just spent with her on the outer reaches of Nova Scotia. The Bulls were up big, Stacey King was trying out new catchphrases, Neil Funk was yelling at the Raptors for being awful. The game went to commercial and I changed the channel to PBS, Custer’s Last Stand, the Battle of Little Bighorn, Sitting Bull was a hero, Custer was a monster who was made into a hero, he and his band of palefaces desecrated Lakota burial grounds, they deserved their fate. About three minutes seemed to have passed and I pressed the pre ch button on the remote, except I must have pressed a different button because instead of the Bulls game I was watching a man who looked a little like Brad Pitt talking to the camera in a slight southern accent about the ways in which he’d grown emotionally in the past three years. He’d spent a lot of time thinking, self-analyzing, changing. He had struggled, he wasn’t ashamed to admit, with trust and commitment issues. Thanks to Thomas Parker, PhD, he’d traced these back to his father’s absence from his childhood. “I don’t know if I’ve ever let someone know the real me,” drawled the beautiful man. “When I give my all to somebody and I’m let down, I revert back to that feeling of when my dad told me he was comin’ to pick me and my brother up for ice cream and . . . yeah, he never came. And after that”—he lowered his eyes and pursed his lips—“after that I didn’t hear from the guy for five, six years.”

He had forced himself to face up to his past. He had done a lot of soul searching. Finally, after all these years, he was ready to fall in love.

The Bachelor is a heartbreaking reality TV show on which twenty-five single women in their twenties or early thirties compete for a lifetime of sex and companionship with a conventionally handsome and successful man. Each episode, the Bachelor takes some of the women on “dates,” many of which involve helicopters and/or rooftops and/or leaping from high places, so that he might gauge their suitability as wives. The bachelorettes are made to live together in a gaudy mansion outside L.A. in order to exacerbate the tensions between them inherent in the show’s competitive premise. Each episode ends with a Rose Ceremony, where the Bachelor dramatically hands out roses to the women he wishes to remain in the competition, tacitly eliminating the ones who aren’t on the show for the right reasons, or have failed to open up. When the rejected women are interviewed immediately after the Rose Ceremony they cry, smudging their dark eye makeup. “I should’ve put myself out there,” they say, or, “I can’t believe I put myself out there like that.” They say, “I’m tired of being alone.” They wipe their tears. “I would’ve been a good wife, a good mother.” Then they say, “It’s his loss.”

Who are these women? Where did they come from? How did they get here? They are executive assistants and apparel merchants and operations managers and food writers and nannies and dancers and dentists and dental hygienists and insurance agents and sales directors and sales consultants and publicists and models and aestheticians, although many of them, as they stress to the Bachelor to convey that they’re on the show for the right reasons, have quit their jobs so they can be here. They are Madison and Raichel and Lacey and Britt and Britnee and Keltie and Marissa and Shawntel. They’re Ashley H. and Ashley S. They’re from America’s biggest coastal metropolises and the beautiful beige suburbs of its most authentic heartland, but mostly they’re from California and Florida. They’re the type of people like, “This is me. This is who I am.” Their faces glow. They’re all about family. They love a good love story.

Andrew Palmer is a writer who work has appeared in The Times Literary Supplement and McSweeney’s and online at Slate, The Paris Review, and The New Yorker. He has been a fiction fellow at the Fine Arts Work Center in Provincetown, Massachusetts, and a resident at Ucross, the Anderson Center, and Yaddo. He grew up in Iowa and lives in Seattle with his partner and their dog. The Bachelor is his first novel. 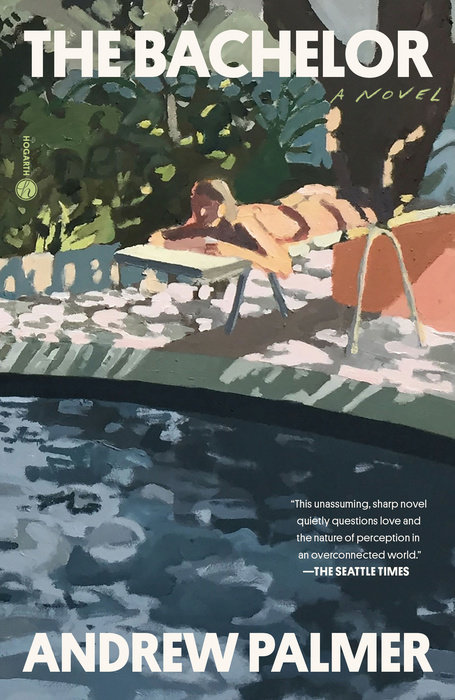