Book One of the Wind-up Garden series

“Fresh and original . . . full of lush writing and detailed worldbuilding . . . [with a] rich fantasy landscape and an almost Shakespearean feel.”—Paste

Twins imbued with incredible magic and near-immortality will do anything to keep their family in power—even if it tears the family apart—in the first book of a mythic epic fantasy duology from the New York Times bestselling author of Wilder Girls.

ONE OF THE MOST ANTICIPATED BOOKS OF 2022—BookPage

Rhea and Lexos were born into a family unlike any other. Together with their siblings, they control the seasons, the tides, and the stars, and help their father rule their kingdom. Thanks to their magic, the family has ruled for an eternity, and plan to rule for an eternity more.

But Rhea and Lexos are special: They are twins, bonded down to the bone, and for the past hundred years, that bond has protected them as their father becomes an unpredictable tyrant—and his worsening temper threatens the family’s grip on power.

Now, with rival nations ready to attack, and a rebel movement within their own borders, Rhea and Lexos must fight to keep the kingdom—and the family—together, even as treachery, deceit, and drama threaten to strand the twins on opposite sides of the battlefield.

In a Garden Burning Gold is a vividly written, atmospheric saga that explores the limits of power and the bonds of family—and how far both can be bent before they break.

An excerpt from In a Garden Burning Gold

A week was too long to be a widow. Even after all her marriages, Rhea had never got used to it. The black, the singing, the veils—­it was enough to drive anybody mad. At least no one ever expected her to cry.

She leaned forward in her seat as her carriage rattled up the road toward her father’s house, Stratathoma, where it was perched on the edge of a sheer black cliff. From here she could only see the thick perimeter wall and above it the peaks of the stone-­shingled roof. Somewhere inside, past the courtyards and double doors, were her siblings. Of them all, Alexandros would be most glad to see her, and she him; it was always strange being separated from her twin, no matter how many times they parted. Nitsos, their younger brother, would have barely noticed her absence, tucked away as he was in his workshop from morning until night. And Chrysanthi would be excited to see her, if only for the stories Rhea brought back from her trips.

Little Chrysanthi—­although, Rhea reminded herself, they were none of them so little anymore—gathered up the stories Rhea told about her consorts and kept them in a small tin box by the side of her bed. Sometimes, if Rhea listened closely during the night, she could hear Chrysanthi open the box and munch contentedly on a story or two, leaving crumbs strewn across her bedsheets. Well, she wouldn’t be disappointed this time. Rhea had a few stored up with just the right flavor. A flavor: a sweet, spicy autumn sort of crispness. Those were Chrysanthi’s favorites.

At last the carriage reached the double doors breaching Stratathoma’s perimeter wall, their gnarled surface painted a deep blue, the color most closely associated with their family name, Argyros. Rhea’s father was quite proud of their name and insisted that his children and his house bear his colors whenever possible. He was the country’s Stratagiozi, her father, in charge of all of Thyzakos, and as his children she and her siblings each had their own responsibilities to contend with. Only hers took her away from home, to some bed in some house in some city that fell under her father’s watch.

She had dawdled with this last consort. He’d made the inconvenient mistake of falling a bit in love with her, and Rhea had seen the flicker of it in his eyes and found herself somehow unable to slide her knife under his ribs, plagued by a thing she supposed she had to call guilt. It was only when the time was well past for a chill to dust across the high grasses and olive trees that she had managed, over their morning meal, to ask him to turn away from her and hold still. It had not been a clean death, and so not a clean season. It worked much better when she could get right to their hearts, as she would be sure to with her next consort—­winter’s, to be chosen in a fortnight.

The carriage continued along the cobblestone path through the grounds and toward the outer courtyard, its studded wooden doors swinging back on their own, operated by a network of chains and gears. Nitsos’s design obviously. He was the middle child, slotted between the twins and Chrysanthi, and while Alexandros followed Baba like a shadow, Nitsos was left to while away the time in his workshop. Windup animals with steam-­beating pulses, clockwork gardens full of fabric flowers. Tinkering with machines and mechanics to make sure everything operated smoothly, in every corner of the world.

Beyond the doors, the drive straightened out and the cobblestones turned to patchwork flagstone. Rhea pressed close to the carriage window to get a first glimpse of the doors into the private inner courtyard. They were too narrow for carriages, and the lintel hung too low to allow a single rider through. When you entered Baba’s house, you entered on your own feet, with no weapons in your hands and no ill will in your heart.

A pair of women were waiting, and as Rhea’s carriage came to a complete stop they darted forward, one to fetch the luggage strapped to the back of the carriage and the other to open Rhea’s door. But Rhea was too eager to get a breath of fresh air after so many hours bouncing around inside a small box. She shouldered the door fully open, the first servant jumping back to avoid its swing, and hopped down, her boots landing lightly on stones still warm from the afternoon sun.

The grass was well tended here, trimmed short, and the roses that trailed across every wall were fully in bloom, as always. Chrysanthi spent a great deal of time out here tending to the landscape, painting everything in careful strokes, making sure every rose was evenly pink.

“Kiria Rhea? Are you ready to go in?”

It was always startling to hear her true name for the first time after a marriage. In the rest of Thyzakos, and across the continent, they called her Thyspira, a title wrought by the first Stratagiozi that passed to whichever child had been given Rhea’s particular responsibilities.

She turned to see the two servants clutching her luggage, her bead-­studded bags standing out against the plain cloth of their dresses. The taller of the two women looked unfamiliar, but Rhea recognized the other. Eleni, the sister of one of Rhea’s former consorts. Usually, Rhea only brought back a few gowns and trinkets from wherever her consorts lived, but five or six seasons ago she’d brought back Eleni. She couldn’t quite remember why, only that as she was leaving Eleni had knelt by the carriage and begged, no matter that her sister’s blood was still drying under Rhea’s fingernails.

They were women sometimes, Rhea’s consorts. It depended, of course, on the selection available. When afforded multiple options, Rhea found she had no particular preference. Lately, though, Thyzak families had been sending mostly sons, apparently judging them to be the most expendable. Frankly, based on her interactions with her own brothers, Rhea was inclined to agree, but it did make for a more boring choosing, both for her and for Chrysanthi, who usually had a bit of fun with the spares.

Rhea nodded to Eleni and the taller servant, and let the two of them walk slightly ahead of her. The servants’ dresses were gray and sweeping, high necklines draping into sleeves that hung loosely about their elbows. For the journey back from her consort’s house in Patrassa, Rhea had worn a traveling suit in mourning black, snug trousers and coat hidden under a stiff woolen cape. Now she thought longingly of the gowns waiting in her own closet. Gorgeous, vibrant things. Mosaics made fabric, structured shoulders smothered in scrolled embroidery. Red and blue and gold—­blood colors, Baba called them.

The cobalt doors swung open, and Rhea sidled through the gap after her servants. In this inner courtyard, too, Chrysanthi’s hand was evident, but it was in an entirely different way. Baba preferred the outer courtyard to be orderly and regimented. Here, he let Chrysanthi do as she wished, and she had taken that to heart. More rosebushes, tendrils escaping up the walls and into every crevice, but other flowers, too. Spindly, wild little things, their tiny white buds gathering in lacelike lattices. In the corner, an olive tree stood proudly, its leaves a more vivid green than those growing in the family orchard. Opposite it, a fountain jutted from the wall, water burbling from the mouth of a stylized lion, and the water, too, was far richer in color than anything Rhea had seen elsewhere. The air itself was heavy with sun, gold splashed across every surface. Chrysanthi had exercised none of her usual restraint and let no shadows linger. Rhea could imagine her bent over the fountain, blending her paints on a little wooden palette before daubing at the crest of every ripple, gilding them with glimmer and shine.

“Enough dawdling,” came a voice from the far end of the courtyard, and Rhea looked up. Her twin brother, Alexandros—­Lexos, for everyday—­stood in the doorway to the main house, his blue coat unbuttoned, hands shoved firmly in its pockets. “I’m getting cold out here waiting for you.”

“What a hard life you live.” Rhea stepped around her servants and crossed to where Lexos was waiting. As she neared him, he held out his arms, and she let a smile snag at the corners of her mouth as she leaned into his embrace.

He smelled of salt and damp, of that musk all old houses got when their stones had sat for so long. Rhea breathed in deeply. It was not a good smell, particularly, but it was familiar. Consorts came and went, but Lexos was always the same.

“Where are the others?” she asked as he released her.

“Where do you think?”

Nitsos’s workshop was in what, in another house, might’ve been the attic. Whenever Rhea visited him there, his worktables were barely visible under the debris his tinkering left behind: gears, finely wrought chains, all manner of pins and screws. Most of his creations were put to use about the house or incorporated into the natural order set working by Stratagiozis past—­or if they were somewhat less useful, let loose into the gardens to wander about until their gears stuck.

“Let’s leave him be,” Rhea said, “and join Chrysanthi.”

Rory Power grew up in Boston, received her undergraduate degree at Middlebury College, and went on to earn an MA in prose fiction from the University of East Anglia. She lives in Massachusetts. She is the New York Times bestselling author of Wilder Girls, Burn Our Bodies Down, and Longyear. To learn more about Rory, go to itsrorypower.com and follow @itsrorypower on Twitter and Instagram.

Book One of the Wind-up Garden series 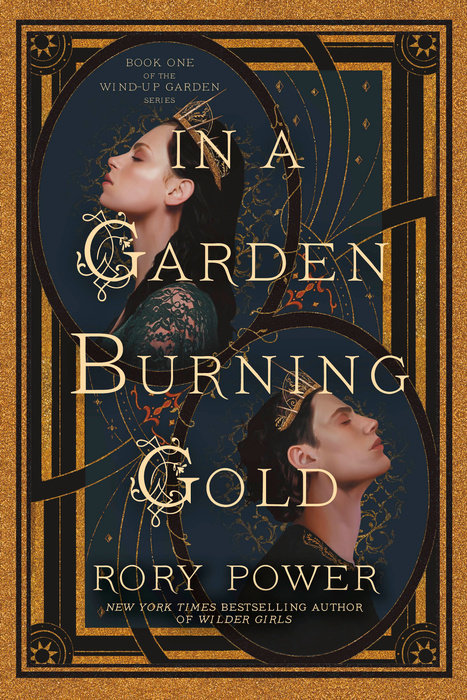