Two Men, a Murder, and an Unlikely Fight for Justice

A “mesmerizing” (The New York Times Book Review) true story about a shocking crime and a mysterious illness that will forever change your notions of how we punish and how we heal—an expansion on one of the most popular This American Life episodes of all time, now with a new postscript

“A remarkable medical detective story–cum–memoir, grippingly told . . . I was drawn in by every part of it.”—Atul Gawande, #1 New York Times bestselling author of Being Mortal

Fresh out of medical residency, Dr. Benjamin Gilmer joined a rural North Carolina clinic only to find that its previous doctor shared his last name. Dr. Vince Gilmer was loved and respected by the community—right up until he strangled his ailing father and then returned to the clinic for a regular week of work. Vince’s eventual arrest for murder shocked his patients. How could their beloved doctor be capable of such violence? The deeper Benjamin looked into Vince’s case, the more he became obsessed with discovering what pushed a good man toward darkness.

When Benjamin visited Vince in prison, he met a man who appeared to be fighting his own mind, constantly twitching and veering into nonsensical tangents. Sentenced to life in prison, Vince had been branded a cold-blooded killer and a “malingerer”—a person who fakes an illness. But it was obvious to Benjamin that Vince needed help. Alongside This American Life journalist Sarah Koenig, Benjamin resolved to understand what had happened to his predecessor. Time and again, the pair came up against a prison system that cared little about the mental health of its inmates—despite more than a third of them suffering from mental illness.

The Other Dr. Gilmer takes readers on a riveting and heart-wrenching journey through our shared human fallibility, made worse by a prison system that is failing our most vulnerable citizens. With deep compassion and an even deeper sense of justice, Dr. Benjamin Gilmer delves into the mystery of what could make a caring doctor commit a brutal murder. And in the process, his powerful story asks us to answer a profound question: In a country with the highest incarceration rates in the world, what would it look like if we prioritized healing rather than punishment?

An excerpt from The Other Dr. Gilmer

On June 28, 2004, in rural Appalachia, a man with my name and my profession strangled his father in the passenger seat of his Toyota Tacoma.

The other Dr. Gilmer was a family medicine physician in North Carolina, at a small clinic he’d founded with his wife near the tiny town of Fletcher. He was recently divorced, living alone in a house on the hill above his office. In the weeks and months before that night, he’d been drinking more than usual, going out to bars during the week. He’d also been making some impulsive decisions—­like buying the brand-­new truck he was driving that night, even though he was massively in debt.

After a full morning of seeing patients, Dr. Vince Gilmer left his practice on the afternoon of June 28 to drive to Broughton Hospital, a psychiatric facility in Morganton, North Carolina, where his father had lived for the previous two years. Vince’s father, Dalton, was sixty years old, a diagnosed schizophrenic, and had landed at Broughton after a time of delusional behavior, drug abuse, and intermittent homelessness. Now, though, he was being released. His son was getting him out.

Dr. Vince Gilmer wasn’t particularly close to his father, but he had arranged for Dalton to be cared for at a facility called Flesher’s Fairview Health and Retirement Center, a five-­minute drive from his house, so he could keep a closer eye on his care. Vince told his co-­workers that he was going to take his father into the outdoors before taking him to his new home, that the two of them were going canoeing on Watauga Lake in Tennessee. It was a place Vince knew well. He had often escaped there to relax during his residency after medical school.

If anyone thought it was strange for Vince to drive two hours in the wrong direction so that he could take his schizophrenic father on a quick evening boat outing, they didn’t mention it. This was the sort of thing he did often. Vince’s nurses and co-­workers would not have been surprised that he thought a trip to the lake might be therapeutic. Dr. Vince Gilmer was well known for his unconventional, friendly, and personal approach to life and medicine. He was a big believer in the power of the outdoors, the sort of doctor who had been known to take depressive patients on walks to help them clear their minds rather than just give them medicine. Patients and nurses called him “Bear” because of his hulking presence and warm hugs.

None of Vince’s co-­workers knew how much his father had deteriorated while at Broughton. If any of them had, they would have realized how difficult canoeing would have been for him. Dalton Gilmer was a frail man, heavily medicated, barely able to stand on his own. He would have needed to be lifted into the boat and certainly could not swim.

Still, along with the usual lawn care tools—­garden shears, gloves, clippers—­that Vince used to maintain the landscaping at his clinic, there was a poorly tied-­down canoe rattling in the bed of the truck that afternoon, throughout the hour-­long drive from Cane Creek Family Health Center to Broughton.

Vince made good time. At five-­thirty p.m. an orderly wheeled Dalton out in a wheelchair and loaded his meager possessions into the rear cab. He lifted Dalton into the front passenger seat after Vince moved aside a dog leash, suspending it from the headrest. Then father and son headed north, toward the North Carolina–­Tennessee border.

Just before midnight, Thomas Browning, coming home from a late movie in Abingdon, Virginia, an hour north of Watauga Lake, saw what he thought was a drunk man sleeping in a ditch on Good Hope Road. He and his wife pulled over and called the cops. When the police arrived, they found Dalton Gilmer’s body, still warm, with contusions and a bruised ring around his neck. He had soiled himself.

He was missing all of his fingers.

By the time a report was filed with the Washington County Sheriff Department, Dr. Vince Gilmer was already back in North Carolina, over a hundred miles away. He’d driven south in the predawn, on the winding two-­lane country roads and slightly straighter highways that penetrate the heart of Appalachia. He’d passed through the moonlit shadows of the Blue Ridge Mountains, through fog-filled hollers and sleeping mountain communities, crossing the North Carolina state line through the Cherokee National Forest.

Ask Vince how he got home that night, and he probably wouldn’t be able to tell you. The precise route is lost to time, lost to the shadows, lost to darkness. The night only comes back into focus again at three-­thirty a.m., this time bathed in fluorescent, twenty-­four-­hour light. That’s when a receipt from a Walmart outside of Asheville shows a ten-­dollar purchase of hydrogen peroxide, paper towels, and a pair of gloves.

Vince used the hydrogen peroxide on his hands, and to wash the blood from the bed of his truck. Back at his house on Ivy Lane, he took an Ambien but couldn’t sleep. The next morning, he showed up on time at Cane Creek Clinic, ready to greet his patients. The day after killing his father, Dr. Vince Gilmer worked a full day, eight in the morning to six in the evening, and no one—­not his nurse, not his receptionist, not a single one of the fifteen or so patients he saw that day—­noticed anything different about him.

I now work in that same clinic. I know some of the previous staff. I see Dr. Vince Gilmer’s patients. I use his exam rooms.

I am Dr. Benjamin Gilmer. Though we are not related, for the last ten years, I’ve lived in the other Dr. Gilmer’s shadow. I know his story better than anyone except Vince himself.

It’s a complex, twisting, and often frightening tale. To many people, it doesn’t make much sense.

But there are a few facts about the night of June 28, 2004, that everyone—­detectives, a judge, a jury, and Dr. Vince Gilmer himself—­can agree on:

Dalton Gilmer was strangled with a dog leash. His son, Vince Gilmer, was holding it. Using a pair of garden shears, Vince Gilmer amputated all of the fingers from his father’s hands, then laid the body on the side of Good Hope Road and drove home.

The detectives had lots of questions—­the most critical one was Why?

Why did Vince Gilmer kill his own father?

Why did he leave the body in an easily discoverable place, on the side of a busy road, when there were so many other secluded spots—­including Watauga Lake—­only five minutes away?

Why did he want to take his frail, mentally impaired father canoeing at night, two hours north of the facility where his new caretakers were anxiously awaiting his arrival?

Why did he wait almost two days to file a missing-­person report?

Why did he tell everyone that his father had wandered off, an easily disprovable lie?

Why didn’t he run?

Why did he cut off his father’s fingers, and what did he do with them?

Why did a caring doctor become a brutal murderer?

A few weeks after Vince killed his father, mine officiated my wedding on a North Carolina mountaintop a short drive from Watauga Lake, where the murder occurred. I was looking forward to starting a family and my professional life as Dr. Gilmer.

Back then, I had no idea there was another Dr. Gilmer.

I had no idea what the other Dr. Gilmer had done.

And I had no idea that it would change both of our lives forever.

Dr. Benjamin Gilmer is a family medicine physician in Fletcher, North Carolina. He is an Albert Schweitzer Fellow for Life and associate professor in the department of family medicine at the University of North Carolina School of Medicine at Chapel Hill and at the Mountain Area Health Education Center. A former neurobiologist turned rural family practitioner, Dr. Gilmer has lectured across the country about medical ethics, rural health, and the intersection of medicine and criminal justice reform. He lives with his wife, Deirdre; their two children, Kai and Luya; and their dog, Prince Peanut Butter, in Asheville, North Carolina.

Two Men, a Murder, and an Unlikely Fight for Justice 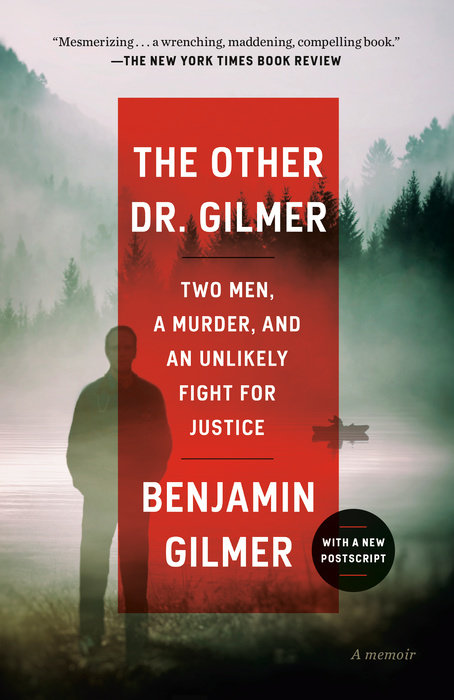