Stay safe and stay calm. A New York University microbiologist gives you the knowledge you need to protect yourself from COVID-19 and other common infectious diseases.

With the spread of COVID-19, the world has never felt less safe. And with so much advice out there, it's hard to know whether you're taking the right precautions to stay safe. Don't panic: there are simple steps you can take to best protect yourself from infection.

Professor of microbiology and pathology at NYU School of Medicine Dr. Philip M. Tierno Jr. cuts through the noise with to-the-point explanations, checklists, and best practices in this brief yet authoritative guide to protecting yourself from infectious diseases. First walking you through what germs are and how every infection happens, First, Wear a Face Mask offers calming, straightforward advice to address the ongoing spread of COVID-19 as well as the germs that imperil us every year.

This practical approach will give you peace of mind as it helps you learn how to protect yourself in a variety of scenarios, from cooking at home to eating out, from your everyday commute to air travel. With tips and tidbits of history, he guides you through taking care of your home, kids, and pets. Dr. Tierno has more than 40 years of experience in the clinical and medical microbiology fields and recently appeared as an expert during the pandemic on CNN in conversation with Chris Cuomo and on Doctor Radio. And in this book, he distills his wide-ranging knowledge into actionable, digestible steps.

Although there is no impenetrable shield to infection, there's a lot you can do to increase your odds of staying safe. Arm yourself with knowledge, keep calm and carry hand sanitizer.

An excerpt from First, Wear a Face Mask

Everything You Need to Know About Germs

You probably picked up this book because you’re worried about COVID-19, so let’s start there.

Coronaviruses are a worldwide group of RNA (ribonucleic acid, the genetic material of some viruses) viruses that were first identified in the 1960s. Bacterial and human cells have both RNA and DNA, but viruses have either one but not both, because they are more primitive cell types. They are the cause of about 15 to 30 percent of common colds, usually in the winter months. The primary symptoms produced are similar to another cold virus, rhino­viruses (which cause about 50 percent of common colds), and both are typified by an upper respiratory infection with a stuffy nose (loss of smell and taste are common), coughing (usually dry), varying fever, malaise, and fatigue.

Some adults carry the virus without fever. And most of these ordinary strains are treated with over-­­the-­­counter medications for the symptoms that they cause. The infection, rarely, spreads to the lower respiratory tract to cause pneumonia. That’s more likely to occur in people who are older, or who have comorbidities like COPD, heart disease, diabetes, or are immunosuppressed.

Studies have shown that antibodies to the coronavirus appear in childhood and increase with age. It has also been shown that people can be reinfected in some rare cases after a period of about a year (that’s why respiratory viruses continually cause colds in humans), although immunity usually lasts longer, and maybe even for life. Coronaviruses are also suspected of causing gastroenteritis, with the virus sometimes found in the stool. Animals also have infections caused by coronaviruses, but their viruses usually do not infect humans and, vice versa, human strains don’t usually infect animals.

Sometimes, however, they do. An outbreak of a novel coronavirus that jumped from animals to humans, called SARS (severe acute respiratory syndrome), occurred in South China in late 2002 and, by the time it waned in mid-2003, resulted in 8,000 cases in 29 countries, with more than 800 deaths (a case fatality rate of 10 percent). Clearly, we learned in that outbreak that animal coronaviruses can mutate and jump from animal species to humans. In fact, a perfect evolutionary melting pot occurred in the Chinese open-­­air animal market where people commingled with animals daily. These animals were slaughtered on the spot and then packaged and sold to people who used them in ritual ceremonies or for food delicacies.

Coronaviruses have the ability to exhibit a high frequency of mutation, and an especially high incidence of deletion mutations. They also undergo a high frequency of recombination during replication. This becomes a perfect prerequisite for a mutation that allows jumping species from animals to humans. It is believed that the SARS virus, for example, jumped from a bat to a civet cat to humans. In 2012 there was another coronavirus outbreak called MERS (Middle East respiratory syndrome). According to the CDC, health officials first reported the disease in Saudi Arabia in September 2012 but later identified that the actual first MERS case occurred in Jordan in April 2012. It then spread from the Middle East to Africa, Asia, and Europe. In May 2015 there was an outbreak of MERS in Korea, which was the largest outbreak recorded at that time. The MERS virus has a reservoir in camels and had the highest mortality rate, 35 percent.

Next comes the new coronavirus disease of 2019 (aka HCoV-­­19, COVID-19, nCoV-­­19, SARS-­­CoV-­­2). I will use the COVID-19 designation, which really refers to the disease caused by the virus, for convenience. This strain of virus is different from all others in that it causes more severe disease, especially in older adults, than the seasonal flu but less severe than SARS and MERS. This novel coronavirus likewise originated from animals and jumped from animal species to humans. It has been reported that in the open-­­air animal market in Wuhan, China, it likely spread from a bat (the COVID-19 virus is almost identical to a bat corona­virus), then likely to a pangolin (scaly anteater), and then to humans via a mutation that occurred during replication.

Several researchers have genetically traced the origin of the New York strains of the COVID-19 virus and found that it most resembled European strains. Hence the original virus started in Wuhan, China, traveled to Europe, and then finally a traveler from Europe brought it to New York. The West Coast received the Wuhan strain from passengers traveling from China to L.A. By 2020 it takes the prize of all previous coronavirus infections. It is spread by direct and indirect contact from one person to another via large aerosol droplets of greater than 5 microns (micrometers) in diameter as well as via airborne droplets (smaller droplets) less than 5 microns in size. The virus has also been reported to remain suspended in the air for at least 3 hours. Indirect spread occurs from contaminated surfaces being touched by hands and then those hands touching your nose, mouth, or eyes, which are the conduits of entry into your body. That is why hand­washing is the single most important thing you can do to protect yourself!

In addition to the virus having been reported to remain in the air for about 3 hours, it is also able to live on a copper surface for 4 hours, cardboard for 24 hours, and on non­porous plastics and stainless steel for 3 days. The good thing is that soap and water can easily kill the virus because the virus has an outer envelope, which is rich in lipids. Most other common disinfectants will also kill this virus. (You can buy either sprays or wipes with a disinfectant claim on the label; when a product claims to be a disinfectant, that means the product destroys or inactivates both the bacteria and viruses noted on the label, whereas sanitizers only reduce the number of bacteria. Make sure you follow the package’s directions about how long the spray needs to sit on the surface before being wiped away.)

Although the virus has been reported to live on some nonporous surfaces for up to 3 days, studies show that its infectivity diminishes over time on these surfaces. It is also important to understand that there have been early indications that individuals infected with COVID-19 may shed and transmit the virus when they are presymptomatic, symptomatic, or postsymptomatic. Several reports have confirmed that approximately 25 percent of people infected with the COVID-19 virus have no symptoms and don’t know that they are infected. It has been reported that more virus is actually spread presymptomatically than when symptoms occur. On a good note, there have been studies from China that suggest that there is no transmission from mothers to their fetuses. In addition, the virus has not been found in samples of amniotic fluid or breast milk. Experts aren’t sure about young children. If kids get the virus, they are generally not that sick (although there are exceptions). They apparently have mostly mild illness, but even children with mild cases can potentially spread the virus to other people, including the elderly. Of course, there are exceptions to every rule. Rarely, some children have been reported to get a potentially fatal hyperimmune inflammatory syndrome (a Kawasaki-­­like disease).

Most at risk for a serious infection are those individuals with comorbidities like high blood pressure, diabetes, or COPD, and the immunosuppressed. Also at high risk are obese individuals, smokers, vapers, and anyone older than 65. The novel COVID-19 virus is at least 3 to 4 times more contagious than the flu virus is.

Dr. Philip M. Tierno, Jr., is a microbiologist with more than forty years of experience in the field of clinical and medical microbiology. He was the director of clinical microbiology and diagnostic immunology at Tisch Hospital, New York University Langone Medical Center, and is currently professor of microbiology and pathology at the New York University School of Medicine. Dr. Tierno has been recognized extensively for his numerous contributions to the medical and scientific community, including the honor of Knighthood by the Sovereign Military Order of Malta for his work on toxic shock syndrome. His work has appeared in publications such as the American Journal of Public Health and Journal of Clinical Microbiology, and he is the author of several books, including The Secret Life of Germs and Protect Yourself Against Bioterrorism. 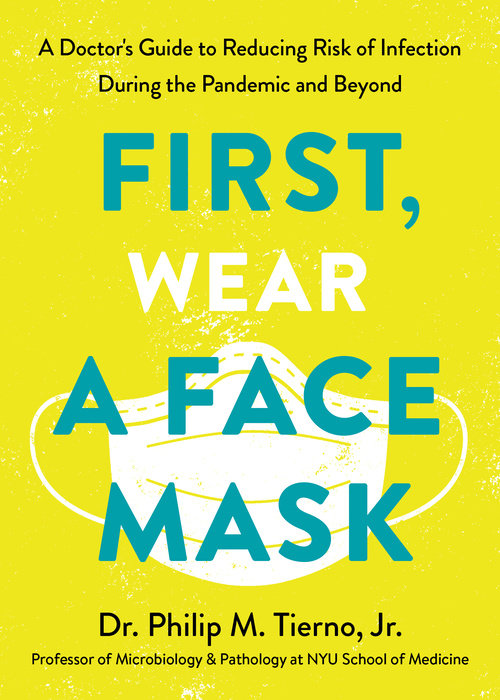