From the New York Times bestselling author of A Long Petal of the Sea comes “a bold exploration of womanhood, feminism, parenting, aging, love and more” (Associated Press).

“The Soul of a Woman is Isabel Allende’s most liberating book yet.”—Elle

“When I say that I was a feminist in kindergarten, I am not exaggerating,” begins Isabel Allende. As a child, she watched her mother, abandoned by her husband, provide for her three small children without “resources or voice.” Isabel became a fierce and defiant little girl, determined to fight for the life her mother couldn’t have.

As a young woman coming of age in the late 1960s, she rode the second wave of feminism. Among a tribe of like-minded female journalists, Allende for the first time felt comfortable in her own skin, as they wrote “with a knife between our teeth” about women’s issues. She has seen what the movement has accomplished in the course of her lifetime. And over the course of three passionate marriages, she has learned how to grow as a woman while having a partner, when to step away, and the rewards of embracing one’s sexuality.

So what feeds the soul of feminists—and all women—today? To be safe, to be valued, to live in peace, to have their own resources, to be connected, to have control over our bodies and lives, and above all, to be loved. On all these fronts, there is much work yet to be done, and this book, Allende hopes, will “light the torches of our daughters and granddaughters with mine. They will have to live for us, as we lived for our mothers, and carry on with the work still left to be finished.”

An excerpt from The Soul of a Woman

When I say that I was a feminist in kindergarten, even before the concept was known in my family, I am not exaggerating. I was born in 1942, so we are talking remote antiquity. I believe that the situation of my mother, Panchita, triggered my rebellion against male authority. Her husband abandoned her in Peru with two toddlers in diapers and a newborn baby. Panchita was forced to return to her parents’ home in Chile, where I spent the first years of my childhood.

My grandparents’ house in Santiago, in the Providencia neighborhood, then a residential district and now a labyrinth of offices and shops, was large and ugly, a monstrosity of cement with high ceilings, drafts, walls darkened by kerosene-­heater soot, heavy red plush curtains, Spanish furniture made to last a century, horrendous portraits of dead relatives, and piles of dusty books. The front of the house was stately. Someone had tried to give the living room, the library, and the dining room an elegant varnish, but they were seldom used. The rest of the house was the messy kingdom of my grandmother, the children (my brothers and me), the maids, and two or three dogs of no discernible breed. There was also a family of semi-­wild cats that reproduced uncontrollably behind the refrigerator; the cook would drown the kittens in a pail on the patio.

All joy and light disappeared from the house after my grandmother’s premature death. I remember my childhood as a time of fear and darkness. What did I fear? That my mother would die and we would be sent to an orphanage, that I would be kidnapped by pirates, that the Devil would appear in the mirrors . . . well, you get the idea. I am grateful to that unhappy childhood because it provided ample material for my writing. I don’t know how novelists with happy childhoods in normal homes manage.

Early on, I realized that my mother was at a disadvantage compared to the men in her family. She had married against her parents’ wishes and the relationship had failed, just as she had been warned it would. She’d had to annul her marriage, which was the only way out in that country, as divorce was not legalized until 2004. Panchita was not trained to work, she had no money or freedom, and she was the target of gossip; not only was she separated from her husband, but she was also young, beautiful, and coquettish.

My anger against machismo started in those childhood years of seeing my mother and the housemaids as victims. They were subordinate and had no resources or voice—­my mother because she had challenged convention and the maids because they were poor. Of course, back then I didn’t understand any of this; I was only able to do so in my fifties after spending some time in therapy. However, even if I couldn’t reason, my feelings of frustration were so powerful that they marked me forever; I became obsessed with justice and developed a visceral reaction to male chauvinism. This resentment was an aberration in my family, which considered itself intellectual and modern but according to today’s standards was frankly Paleolithic.

Panchita consulted several doctors trying to find out what was wrong with me; maybe her daughter suffered from colic or a tapeworm? An obstinate and defiant character was accepted in my brothers as an essential condition of masculinity, but in me it could only be pathological. Isn’t it always thus? Girls are denied the right to be angry and to thrash about. We had some psychologists in Chile, maybe even child psychologists, but in a time dominated by taboos, they were the last resource for the incurably mad. In my family, our lunatics were endured in private. My mother begged me to be more discreet. “I don’t know where you got those ideas. You will acquire a reputation of being butch,” she told me once, without explaining what that word meant.

She had good reason to worry about me. I was expelled from school—­run by German Catholic nuns—­at age six, accused of insubordination; it was a prelude to my future. Maybe the real reason I was expelled was that Panchita was a single mother with three kids. That should not have shocked the nuns, because many children in Chile were born out of wedlock, but not usually in our social class.

For decades I considered my mother a victim, but I have learned that the definition of victim is someone who has no control or power over her or his circumstances. I don’t think that was her case. It’s true that in my early childhood my mother seemed trapped, vulnerable, and sometimes desperate, but her situation changed later, when she met my stepfather and started traveling. She could have fought for more independence and the life she wanted; she could have developed her great potential instead of submitting. But I know that’s easy for me to say because I belong to the feminist generation. I had opportunities that she didn’t have.

Another thing I learned in my fifties in therapy is that the lack of a father in my childhood likely contributed to my rebelliousness. It took me a long time to accept Uncle Ramón—­as I always called the man Panchita paired up with when I was about eleven years old—­and to understand that I couldn’t have had a better father.

I realized this when my daughter, Paula, was born; he fell madly in love with her (it was mutual), and for the first time I saw the tender, sentimental, and playful side of the stepfather against whom I had declared war in my adolescence. I had hated him and questioned his authority, but he was an invincible optimist and never even noticed. According to him, I was always an exemplary daughter! Uncle Ramón had such a poor memory for anything negative that in his old age he called me Angelica, my middle name, and said I should sleep on my side so as not to crush my wings. He repeated this up until the end of his life, when dementia and the fatigue of living reduced him to a shadow of the man he had once been.

In time, Uncle Ramón became my best friend and confidant. He was cheerful, bossy, proud, and a male chauvinist, although he denied the last, arguing that no one was more respectful to women than he. I was never able to fully explain to him how his tremendous machismo manifested. He left his wife, with whom he had four kids, and his wife never consented to an annulment of the marriage, which would have allowed him to legalize his relationship with my mother. That didn’t stop them from living together for almost seventy years. At the beginning, there was scandal and gossip, but later on very few objected to their union. Customs relaxed and, in the absence of divorce, couples got together and separated without bureaucracy.

Panchita resented her partner’s defects as much as she loved and admired his good qualities. She assumed the role of a dominated and often furious wife because she felt incapable of bringing up her children alone. To be maintained and protected came with an inevitable cost.

I never missed my biological father or had any curiosity to meet him. His condition for consenting to the annulment of his marriage to Panchita was that he would never have to take care of his children, and he took that to the extreme of never seeing us again. The few times his name was mentioned in the family—­a subject that was carefully avoided—­my mother would get a terrible migraine. I was told only that he was very intelligent and had loved me dearly. I’ve also been told he would play classical music for me and show me art books, and that at two I could identify the artists. He would say “Monet” or “Renoir” and I would flip through the pages to find the right illustration. I doubt it. I wouldn’t be able to do that now, even with the full use of my faculties. In any case, all that is said to have happened before I was three, so I don’t remember, but my father’s sudden disappearance probably scarred me. How could I trust men who love you one day and vanish the next?

My father’s abandonment of us is not exceptional. Women are the pillar of the family and community in Chile, especially among the working class, where fathers come and go and often disappear for good, never to see their children again. Mothers, on the other hand, are trees with firm roots. They take care of their children and, if necessary, others. Women are so strong and organized, it has been said that Chile is a matriarchy. Even the worst cavemen repeat this fallacy. The truth is that men control political and economic power—­they make the laws and apply them at their convenience—­and in case that does not suffice, the Catholic Church, with its customary patriarchal zeal, intervenes to support them. Women are the bosses only in their families . . . and then only sometimes.

Born in Peru and raised in Chile, Isabel Allende is the author of a number of bestselling and critically acclaimed books, including The House of the Spirits, Of Love and Shadows, Eva Luna, Paula, and In the Midst of Winter. Her books have been translated into more than forty-two languages and have sold more than seventy-four million copies worldwide. She lives in California. 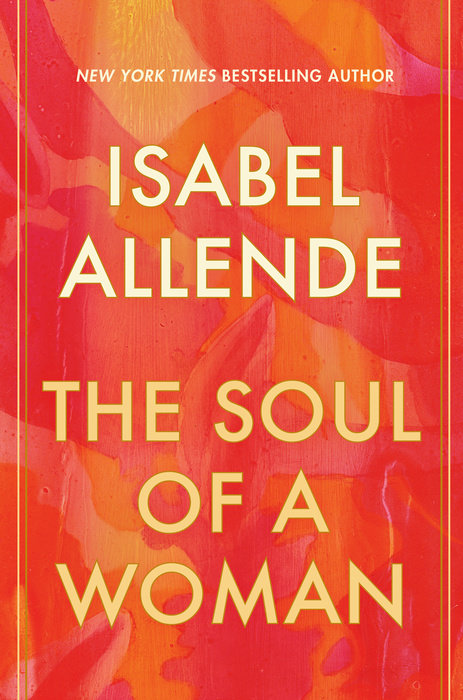