Come with the Mob Squad on an amazing adventure through the Overworld in this official Minecraft novel!

The village of Cornucopia is practically perfect in every way. Plenty of food, cozy homes, and a huge wall to keep everyone safe from the scary world outside. What more could a kid possibly need?

Mal, a fearless girl, needs adventure, and her friends are right there with her: Lenna, a dreamer whose family underestimates her every day. Tok and Chug, brothers who love to build stuff (Tok) and smash stuff (Chug). They’re best friends, and in a town whose grown-ups value safety over bravery and fitting in over standing out, they’re the bad apples.

But when a mysterious mob sneaks past Cornucopia’s defenses, the village is in huge trouble. And nobody knows what to do. Finally faced with the adventure she’s always wanted, Mal and her friends defy the rules their elders have always followed and set out beyond the wall for the first time.

On their journey across the Overworld, they discover wonders they’ve never dreamed of and dangers they’ve never imagined. To save the day, they’ll have to prove they’re more than bad apples. They’re the Mob Squad!

An excerpt from Minecraft: Mob Squad

So here’s what you need to know: My name is Mal, I live in a town called Cornucopia, and I would do anything for my friends. Literally. Which is why they always come to me for help.

My family runs the biggest cattle ranch, which I’ve nicknamed Cornu-cow-pie-a as a joke. Most days, I wake up with the rooster and take the cows out to pasture, which isn’t a very long journey, as our town is completely contained within impossibly tall walls. Still, we have to switch where the cows graze or they’ll eat down to the dirt and possibly keep going. Cows aren’t very smart. They are cute, though, and I like eating breakfast as they graze. Their crunching is very companionable.

“Mal!” a voice calls as I munch on my apple.

I look around—definitely not a cow. And anyway, I know that voice.

My friend Lenna jogs toward me, out of breath and frantic, her poufy brown hair bouncing and full of leaves. “Mal. You’ve got to come help. Jarro has Tok and Chug cornered in an alley!”

With Lenna, you have to stop and make sure you have all the details right.

“Okay, slow down. I know Tok couldn’t fight a sick beetroot, but Chug can take on Jarro any day of the week. What’s the problem?”

She cocks her head. “Chug has a hoe.”

See, Chug and Tok are the other two people in our friend group. They’re brothers, but as different as two people can be. And, yes, they’re almost always in trouble for something or other. Scrapping with Jarro is one thing, but if Chug is holding a hoe and Jarro goads him enough, especially in a hidden alley downtown, we might have a real problem. Plus, if Chug breaks the hoe over Jarro’s head, he’ll be in even worse trouble.

You can buy them only from Old Stu, and they’re pretty expensive.

And Tok . . . ​kinda goes through a lot of tools. He’s always trying to create interesting gadgets to help around their family’s pumpkin farm—not that any of them seem to work. He’s very smart and creative, but he gets so excited that he forgets about rules and safety.

Chug, on the other hand, is all fists and not a lot of calculations. We need to hurry—not to protect the boys from Jarro, but to protect Chug from Chug. He’s my best friend, but I’m the first to admit that he doesn’t know when to shut his mouth. He’s the king of comebacks and is always ready to stand up against any bully. If he hurts Jarro, things will go badly for all of us.

“Seriously, Mal. Chug was turning red. We’ve got to hurry!”

Lenna turns around to run, looking back to make sure I’m with her. She’s known for hyperbole and telling tall tales, so I’m pretty sure Chug isn’t about to start bopping people on the head with a hoe. Still, I’m the one who has to make sure everyone is okay, so I sigh and toss my unfinished apple toward the nearest cow before standing to run after Lenna.

I end up outpacing her as we charge into the Hub, which is what we call the center of town. She leads me to a back alley in the warren of old shops and houses, and sure enough, there they are. Tok is up high, out of reach, perched on part of an ancient staircase that leads toward a second floor door nobody uses anymore. His cat, Candor, is by his side, her fur puffed up as she hisses at the scene below. No one knows if Candor is male or female, but Tok decided that she is a she and she hasn’t complained, and I respect that. She spends most of her time on his shoulder. I can’t really picture Tok without an orange ball of fluff acting as his second head.

The scene below, though? That’s the real problem. I’m glad we ran.

Chug does indeed have a brand-new hoe held in both hands, and he and Jarro are nearly chest to chest in the narrow alley. Jarro’s two toadies, Remy and Edd, are just behind him, aching for a fight. I’m glad Lenna and I are here so the boys aren’t outnumbered.

“Put down the hoe and put up your fists,” Jarro growls. He’s a foot taller than Chug with longer arms, but Chug’s got more weight—and more reason to fight. He’ll do anything to protect his brother.

“If I put down the hoe, one of your pet donkeys over there is going to steal it,” Chug says. “Isn’t that why you chased my brother into this alley to begin with? Because you’re a thief? You certainly stole all the ugly around town for yourself.”

Jarro doesn’t know what to say to that, as he’s not very smart. “Come on!” he shouts. “Quit yapping your trap and fight me!”

Chug notices Lenna and me standing behind Jarro and grins. “Okay, never mind. I’ll put down the hoe. The odds just got much better. Hey, buddies!”

When Chug waves, Jarro and his friends turn around to look at us. Chug tosses the hoe up to Tok and takes advantage of Jarro’s surprise, socking him in the belly. Jarro doubles over with a startled “Oof!”

“Aw, man. I put up my fists, and you totally missed it!” Chug says.

Remy and Edd are nervous now—this crew of bullies likes to find and corner weaklings, not go up against four friends.

His toadies stay focused on Chug, but Jarro recovers enough to turn around and face me.

“Oh, look. It’s your fearless leader.” Jarro’s face screws up in disgust as he looks me up and down. “I’m not afraid to hit girls, you know.”

He takes a step toward me and Lenna, and I don’t flinch, but she skitters away.

“Wow, you’re so open-minded,” I say. Over his shoulder, I see Chug putting up both fists, and I make eye contact and shake my head. I want to stop the fight, not allow Chug to deepen his grudge with Jarro. “I’m not afraid to hit boys, either.”

Jarro sneers and steps even closer, so close I have to step back or—ew!—touch him. “You’ve never hit anybody. You just get out of every situation by—”

“Doesn’t your mom hate it when you start fights, Jarro?” I say, chin up so he won’t notice my trembling knees. “Lenna, go check the Hub and see if she’s standing around close by.” Jarro’s mom lives for gossip and is usually near Stu’s Store this time every morning to keep tabs on everyone in our town. Lenna nods and disappears around the corner. For once, Jarro is right—as our group’s unofficial leader, I prefer to resort to diplomacy. Or, in this case, threats.

The toadies turn around to see what Lenna and I are doing, and Chug being Chug, he steps between them and lands a kick right in Jarro’s backside. I wince—if Chug will just let me handle it, we can all get out of here without bruises or lectures. Jarro whirls on him, hands in fists.

“I think I hear your mom, Jarro,” I say warningly.

Even Jarro can do the math of four against three, plus factor in the looming concern of his mom. “You little babies can keep your hoe. But one day, I’m gonna catch Tok alone, and then . . .”

“No you won’t.” Chug shakes his head slowly. “But if you ever do, I think you’ll be surprised at what he can do. Like, I dunno—basic math? All sorts of things you can’t understand. He’s tougher than he looks.”

“Then why does he always run?” Jarro shoots back, trying to appear superior.

“Because he’s afraid that whatever made you look like that is contagious.”

Having lost both the verbal and physical duels, Jarro shakes his head. “You’re not worth it.” He jerks his chin at his toadies and bumps into my shoulder on his way out of the alley. Once they’re gone, Lenna creeps out from where she was hiding behind an old, broken chest. She looks sheepish and is holding an interesting rock, so I’m guessing she got distracted and never even made it to Jarro’s mom.

“So that went well,” Tok says.

He tosses the hoe to me and scoots to the edge of the step. When he isn’t sure how to get down, Chug gives him a hand. Candor leaps off the staircase like it’s nothing, and then we’re headed out of the alley and back toward the center of town.

“It went great!” Chug holds up a fist. “Any day I get to punch Jarro is a good day.”

“It didn’t go as well as you think,” I remind them both. “Now Jarro’s going to go tell his mom that you hit him, and everyone is going to give us dirty looks.”

“If they bothered to ask us what happened, they’d call us heroes!” Chug wails.

“Yeah, but adults never really want to know what happened. They just want the problem to go away.” Candor jumps onto Tok’s shoulder, and he strokes her orange fur.

We do indeed see Jarro whispering to his mom, Dawna, so I take off at a run, and everyone else follows. We don’t have to talk about where we’re going—the boys’ pumpkin farm is our unofficial base. 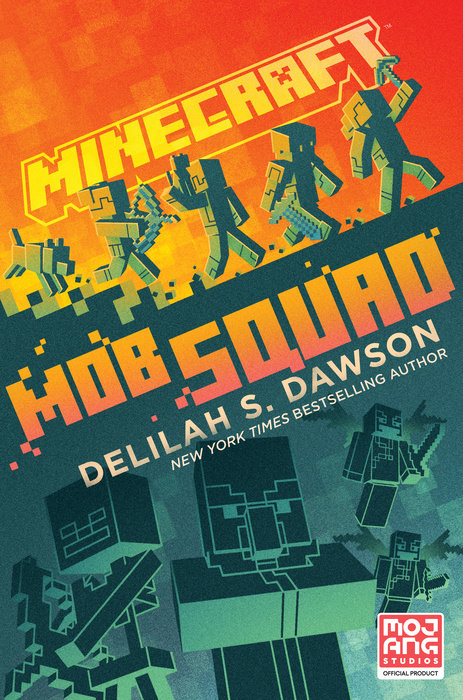