A powerful and redemptive story of how the dazzling world of roller derby helped one young woman transform her fear and self-doubt into gutsy, big-hearted, adventurous living

“A universal story of healing and triumph, made all the more beautiful, wild, and free by Gabe’s fierce love for roller derby and her team, who become her family.”—ABBY WAMBACH, Olympian, activist, and author of the #1 New York Times bestseller Wolfpack

Growing up queer in a conservative Midwestern town, Gabe Montesanti never felt comfortable in her own skin. A competitive swimmer, she turned to perfectionism and self-control to create a sense of safety, only to develop an eating disorder and constantly second-guess her instincts. When she enters graduate school in St. Louis, she is determined to put the baggage of her childhood behind her. With no prior experience, she joins Arch Rival, one of the top-ranked roller derby leagues in the world. Gabe instantly falls in love with the sport’s roughness, intensity, and open embrace of people who are literally and figuratively scarred. She soon finds community and a sense of belonging, reveling in the tattoos, glitter, and campiness.

But when Gabe suffers a catastrophic injury, she can no longer ignore the parallels between the physicality of roller derby and the unresolved trauma of her upbringing. Rendered inactive, forced to be still, Gabe realizes she needs to heal her emotional wounds as much as her physical ones; she must confront her fear and self-diminishment in order to feel truly alive.

Told with unflinching honesty and a giant dose of wonder, Brace for Impact is a tender, inspiring memoir about the everyday heroism of pursuing a life less ordinary, and the deeply human need to be at peace with who you are.

An excerpt from Brace for Impact

From the outside, the St. Louis Skatium seemed just as abandoned as the surrounding buildings. The strip looked like a stage set, all peeling paint and muted colors. There was a for lease sign hanging crookedly in the window of Kleb Clothing and Shoe Company; both the neighboring storefronts were boarded up. The busch beer sign hanging from an empty bar was coated in rust and cobwebs. Beside Tucker’s Bar & Grill, two old men wearing overalls and yellow gloves were rooting through a dumpster.

Kelly and I surveyed the roller rink from our old Corolla. We had never been to South City before and had no idea what to expect. The building’s exterior, a flat, white façade with dull red accents, held no indication we had come to the right place. I’m not sure what I was expecting: something that looked more like the roller rinks of my childhood, perhaps. Kid-­friendly graphics painted in bright colors on the walls. A tall roller skate with wings displayed on the roof. A sign would’ve helped me feel less intimidated—­roller derby recruit night or future skaters enter here. Even home of arch rival roller derby would have put me at ease; instead, there was only hap y bir hd y julia 7, the missing letters all resting upside down at the bottom of the plastic showcase.

“Are you nervous?” Kelly asked. “Because I’m not even interested in derby and I’m nervous for you.”

When I was fifteen, my dad took me and my sister, Cam, on a tour of all the places he and my mother used to frequent in the early days of their relationship. We were in Denver visiting my dad’s parents; perhaps the absence of my mother, who had stayed home in Michigan, allowed us to experience a rare collective feeling of missing, even romanticizing, her presence. First, we drove past the Grease Monkey, where my parents had first met. Mom came in for an oil change and Dad was her mechanic; we don’t know exactly what happened after that, but my sister and I loved to speculate about the initial attraction. Was it her dark eyes? His crooked smile? It was hard to imagine a time when they might have been passionate with each other. Although they stayed married, the sole affection we saw between them was a quick kiss in church before Communion. The only detail I know for certain about that time is that my dad couldn’t drive my mom on dates because his license had been revoked for drag racing. This was a particularly juicy piece of intel: his youthful recklessness, his passion. I was proud of him, in a twisted kind of way, for getting in trouble, since it was so uncharacteristic of the quiet, pious man I knew him to be.

When we pulled up to the house they lived in when I was born, we didn’t get out of the car. I wondered if I’d have an emotional connection to the house, but when I looked at it, I felt nothing at all. The roof was flat as a ballroom; it was essentially a small box on a shady corner of two unremarkable streets.

“That’s it?” Cam asked. Even at ten, she was hard to impress.

Dad tapped on the steering wheel absentmindedly. I could tell he was toying with the idea of knocking on the door and asking the current occupants if we could take a look around.

“It’d be nice to show you your old room,” he said. There was a pause; the car was still running.

I understood my dad’s apprehension. If we knocked, we might be able to go in—­but we’d also face the possibility of rejection; whoever opened the door would have all the power. My dad pushed open the glove compartment, removed a yellow cloth, and began wiping down the dashboard, which he always did when he was nervous. Maybe the thought of being inside our old home was frightening to him, I remember thinking. What if it looked completely different? What if it looked the same, and flooded him with memories of a time when our family hadn’t yet done so much damage to each other?

“Are we going in or what?” Cam asked. I cringed, wishing she had let my dad linger in the possibility a bit longer. Her question seemed to snap him out of his reverie. We sat for a moment longer, then drove off. We never spoke about it again.

The walk up to the Skatium was flanked by a black chain-­link fence blocking off a neighboring bus station. In places, the chain had broken away from the poles anchoring it to the ground, and it had twisted up toward the sky. Several men in navy blue jumpsuits on the other side of the fence were smoking cigarettes and laughing.

The air was thick and wet inside the Skatium. We had to push through a cloud of pot smoke to fully enter; the stink of weed tangled with that of body odor. On the track were purple benches arranged campfire-­style around a cooler of beer. About a dozen people, who I presumed to be other recruits, were already perched there chatting. They ran the gamut in terms of age and appearance; I felt curious about what had brought everyone here.

Stepping onto the track to join them was daunting; the surface was white, and for a brief instant I mistook it for ice. In some places, the wood had been stripped. In others, the track was warped and uneven. Small beams of light were shining onto the Skatium floor, reminding me of mornings in my childhood parish when the crucifix was perfectly illuminated. But unlike at church, where big windows were the source of light, the light flooding the Skatium was the result of holes in the roof. The ceiling was skeletal—­barnlike, with crisscrossing wooden beams. Buckets, half-­filled with rainwater, dangled from the rafters, and a disco ball hung in the center.

On the sidelines, an elderly woman was vacuuming. Her hair was long and stringy, her body shaped like a question mark. After a few seconds of observation, I realized she was running the vacuum over the same strip of carpet again and again. She must have been gripping tightly, because her knuckles were white; the hand not occupied with vacuuming was clenching a fistful of her baggy T-­shirt as if to wring it dry.

“That’s slightly eerie,” I whispered to Kelly. She nodded emphatically.

We took our seat on the purple benches beside another recruit, a butch woman who introduced herself as Alice. She noticed us staring at the vacuuming lady and said, “This place is f***ing crazy, isn’t it?” Encouraged by our nodding, Alice leaned closer so the other recruits couldn’t hear. “I used to come skate here as a kid. Been here a lot over the years. I’ve sometimes wondered if it’s a drug den. My guess is meth.”

“How do you know?” Kelly asked. As usual, she wanted facts.

Alice simply gestured to the woman, who was done vacuuming her swatch of carpet and had moved on to wiping down the Coke machine and old arcade games. She wiped the surface of the pinball machine but didn’t touch the handles. The sea of stuffed animals and rubber balls underneath the dangling metal claw was covered with a fine layer of dust, but the woman either didn’t notice or didn’t care. She had a way of walking that looked more like hovering; she disappeared and reappeared with such regularity I became convinced she could float through the walls.

We continued watching the woman for a few minutes as the other recruits trickled in. Alice stuck her arm into the cooler of beer and offered one to Kelly and me.

“You all need to drink more shitty beer!” an approaching woman shouted. “And I’m the one in charge so you have to do what I say!”

The woman was breathtaking. She had a tuft of blue hair and was wearing an exorbitant amount of makeup. Her eyelids were coated in gold glitter, and each eye was framed by a perfect wing. Her lips matched her hair and the blush of her cheeks. On her left arm was a large, unfinished tattoo of a wolf woman. Her right leg bore a hand-­sized heart pierced by a dagger and the words keep rollin. Though I loved all her ink, what I admired most about the woman was her clothing: she had hacked her jersey into a crop top and wore cheetah-­print hot pants that more closely resembled underwear than shorts. My mother, who surely would have tried to recruit this woman to her Weight Watchers class, always emphasized that women bigger than a size six should cover up, hide themselves, and work hard to get thin, but clearly this woman didn’t subscribe to that philosophy.

I recognized the name on the back of the woman’s jersey: Soup Beans. We had traded emails; I had asked questions about Recruit Night and offered more information than was probably necessary about my background. Seeing Soup Beans in person made me feel embarrassed and shy about everything I had disclosed. (“I was a competitive swimmer from fourth grade through college, and I really just miss being part of a team.”) She had responded that roller derby could probably fill that hole.

“Listen up, sweet baby angels,” Soup Beans said, clapping her hands. “Tonight we’ll low-­key get to know each other and casually ask some questions while we watch derby. The main purpose is for you to experience the action! Who here has seen roller derby live before?”

Gabe Montesanti is a queer Midwestern roller derby player. She earned her MFA in creative nonfiction from Washington University in St. Louis. Her piece “The Worldwide Roller Derby Convention” was recognized as a notable essay in The Best American Essays. She lives in St. Louis with her wife. 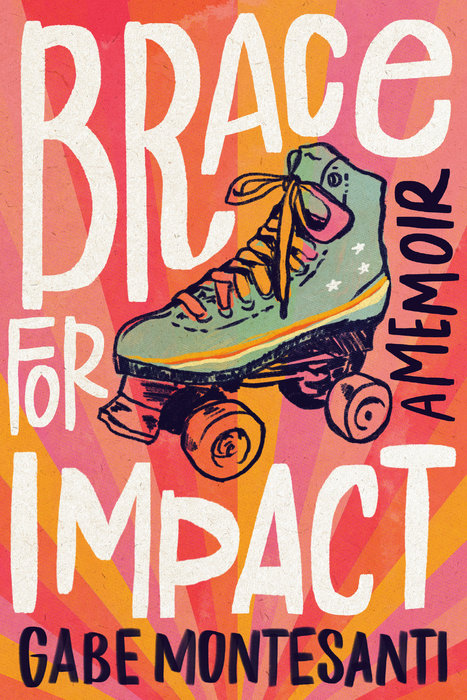